Round after round of the 2022 FIDE Candidates Tournament, Ian Nepomniachtchi is proving to be an immovable object. Today, while he held his lead with a draw against second-place Fabiano Caruana, the ground beneath him began to shift. 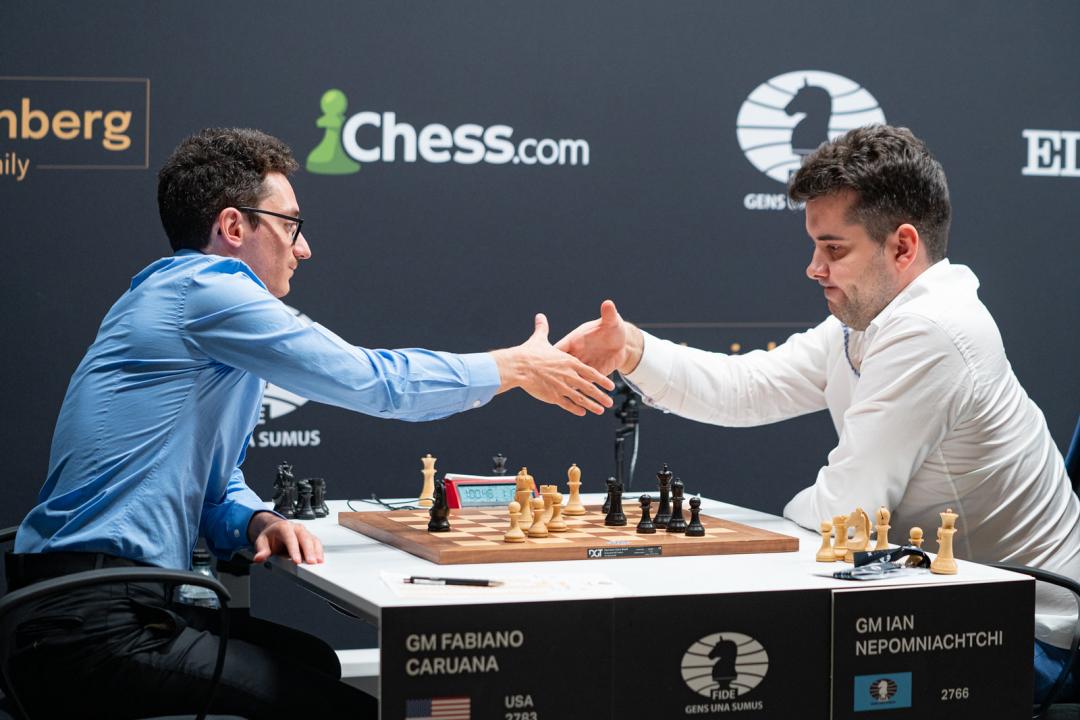 Image Caption
Caruana and Nepomniachtchi shake hands after round 9 of the 2022 Candidates. Photo: Stev Bonhage/FIDE.

With this result, Nepomniachtchi and Caruana maintain the 1 and 2 spots with 6½ and 5½, respectively.

Heading into the ninth round today, excitement swirled around the Fabi-Nepo pairing and the fact that Hikaru Nakamura was back in business after a decisive round 8 win against his American compatriot. It was appearing as though a new leader may emerge. But as IM John Watson observed in his coverage of round 7: with a slip here or a surge there, it’s still anyone’s tournament.

Ding Liren picked up his first event win against Jan-Krzysztof Duda. The win must have felt gratifying for rating-favorite Ding who has been facing criticism for his lackluster, risk-averse performance, and recently lamented being steered into a drawish line by Nepomniachtchi in round 8.

Alireza Firouzja and Teimour Radjabov also picked up their first Candidates wins today, both with White in a d3 Berlin. Firouzja bested Rapport, while Radjabov’s point came at the expense of Hikaru Nakamura, who was eyeing the lead after yesterday’s win against Caruana, but now must watch his back -- tied with Ding Liren at 4½ and perched a precarious half-point above a three-way tie between Rapport, Firouzja, and Radjabov. 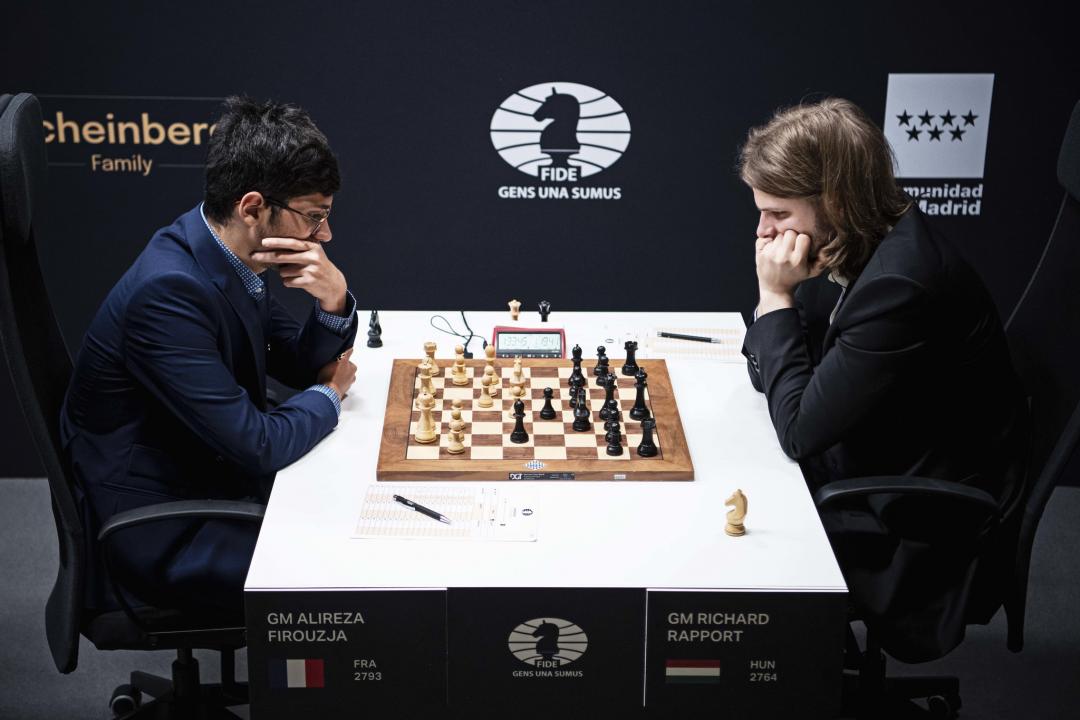 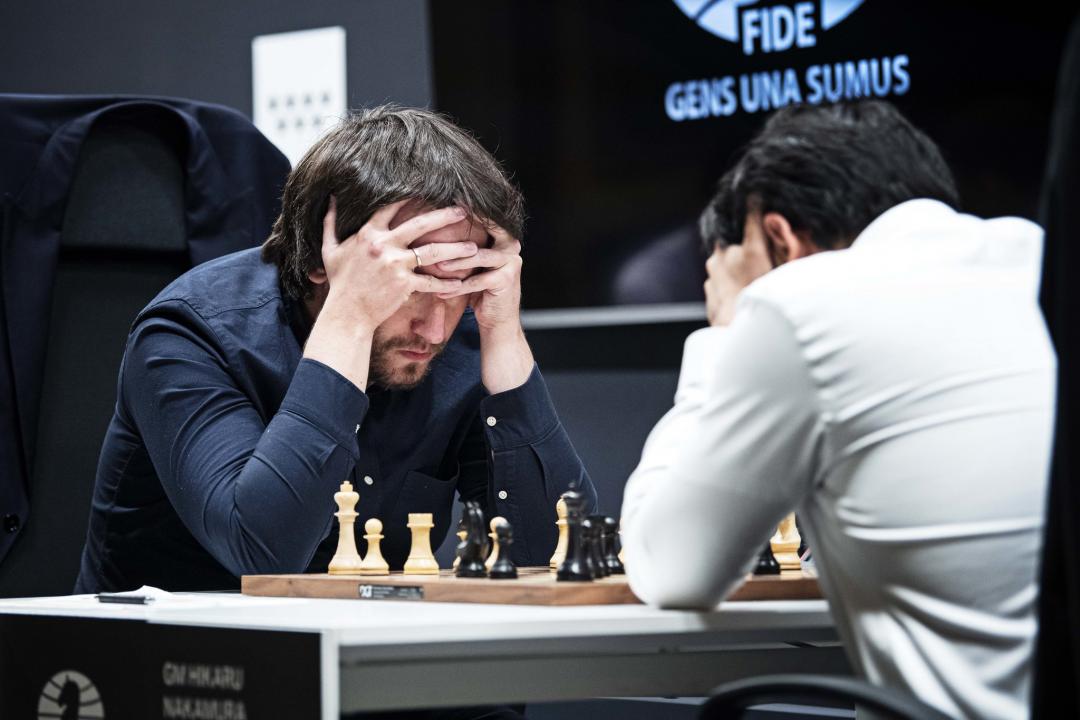 Image Caption
Radjabov-Nakamura at the 2022 Candidates, Round 9. Photo: Stev Bonhage/FIDE

Nepo must be breathing a sigh of relief heading into Tuesday’s rest day. A loss to Caruana would’ve meant that he and the American would be tied for the lead, with his fate resting more in the performance of the other Candidates. Now, still a clear point ahead, Ian can’t let his guard down, but he can certainly stand his ground against the challengers who’ve taken half of a tournament to find their footings. We’ll have to wait until Wednesday to see if anyone can move that mountain.

The pairings for round 10 are:

US CHESS CREW AND THAT MAN…

US CHESS CREW AND THAT MAN HARTMANN.:....Fabulous every round rabid rapid "say something mister" coverage by grandmaster Aagard and being followed avidly by many. ONE SUGGESTION..HAVE INSTANT PGN DOWNLOAD OF ALL AAGARD ANNOTATIONS ..ALL ROUNDS INSTANT AGAARD ALL THE TIME ...JUST HIT ONE BUTTON. Otherwise readers have to go on a world wide treasure hunt for The Aaagard. Watson also very nifty appreciated timely warm up for the giant.. My have times have changed. US CHESS rocks bigtime. . Oh how sweet it is.
Jude Acers/ New Orleans

Thanks for the love, Jude!…

Thanks for the love, Jude! We will make all the games available in pgn at the end of the event!