In another day of fighting chess in round two of the 2022 FIDE Candidates Tournament, GM Hikaru Nakamura showed his strength of both will and play, defeating GM Teimour Radjabov in a grinding 75 move encounter.

GM Jacob Aagaard has provided flash annotations for the four games. Replay them below, or check out our printable pdf bulletin! 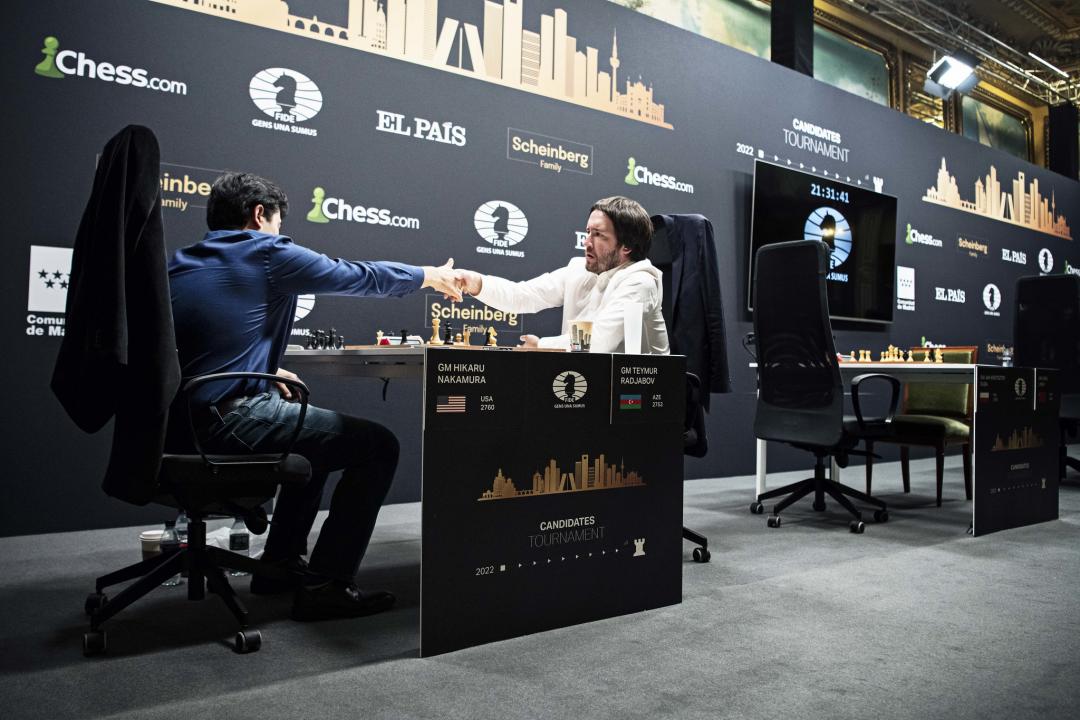 Emerging from an innocuous opening position, Nakamura managed to set Radjabov continual problems. After the Azeri grandmaster made an error approaching the time control, Nakamura pounced, grabbing a pawn and putting his opponent on the continual defensive. The combination of two pressures — time and positional — were too much for Radjabov, and Nakamura took the full point in the third time control.

Nakamura’s post-game recap from Madrid — again, what a world in which the world’s elite do this kind of thing! — was much happier than the one after round one.

GM Fabiano Caruana, who defeated Nakamura in round one, followed yesterday’s victory with a slightly adventurous draw against GM Ian Nepomniachtchi. 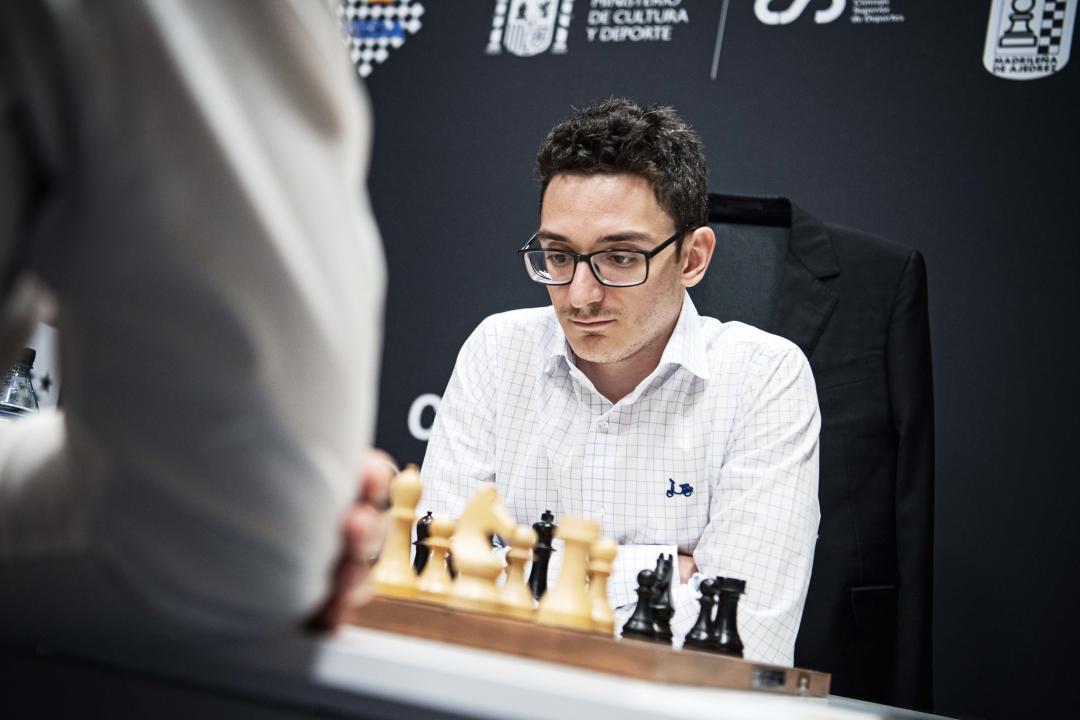 Speaking after the game, Caruana described his ‘novelty’ (although it has appeared in at least three games on lichess.org) as “a huge gamble.” Nepomniachtchi responded well with 15. d4 and 17. Ra3, a move that “shocked” Caruana. While White had compensation for the pawn, just how much is debatable, and after Caruana’s 20. ... c5! Black was slightly better.

But Caruana was imprecise in a few spots, and in the end, he eschewed a strong Exchange sacrifice on move 30 and instead headed for a three-fold repetition.

The draw leaves Caruana and Nepomniachtchi in the early lead, with both players at 1½ points after two rounds of play. 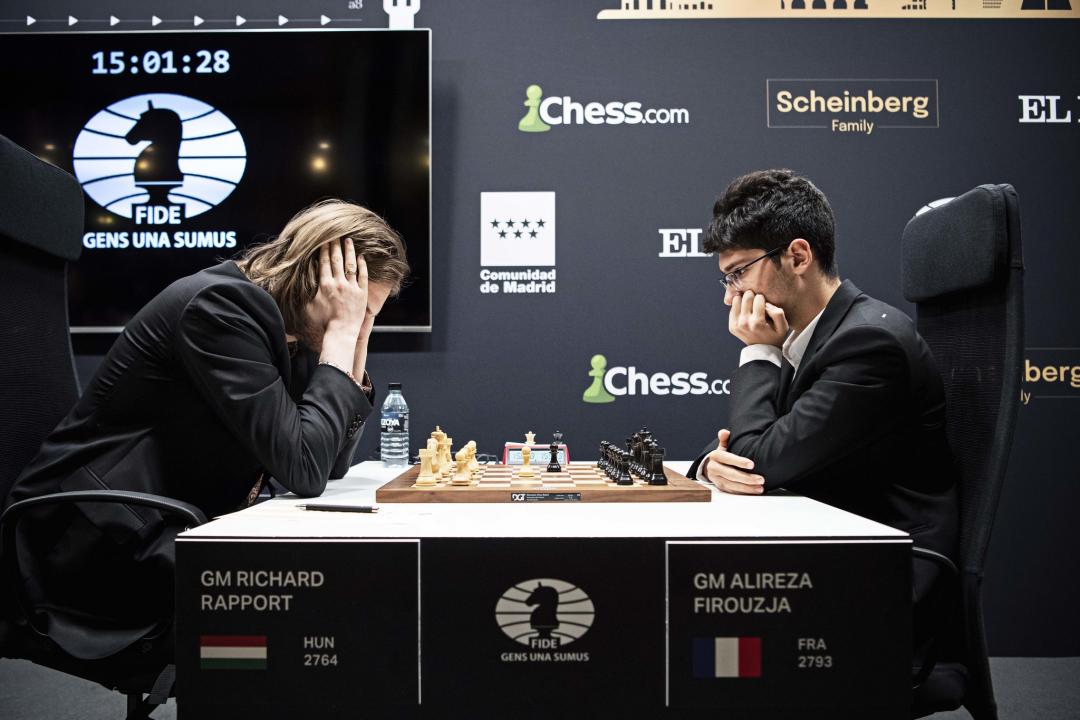 GM Richard Rapport will rue his missed chances in his game with GM Alireza Firouzja. After building up a slight advantage in a quiet position, the double rook endgame — which are notoriously difficult to play, and often little-studied — proved too tricky to convert, despite there being a number of winning chances along the way.

With this game Firouzja, the youngest player in the event, can be said to have passed the first of his tests. Having held with two blacks to begin the tournament, and showing fighting intent in both of his games, perhaps Firouzja will have bedded in a bit and can show his best chess.

On the other hand, Nakamura, who takes Black against the Iranian phenom in Sunday’s round three, may well be looking at the game as an opportunity to climb the scoreboard. 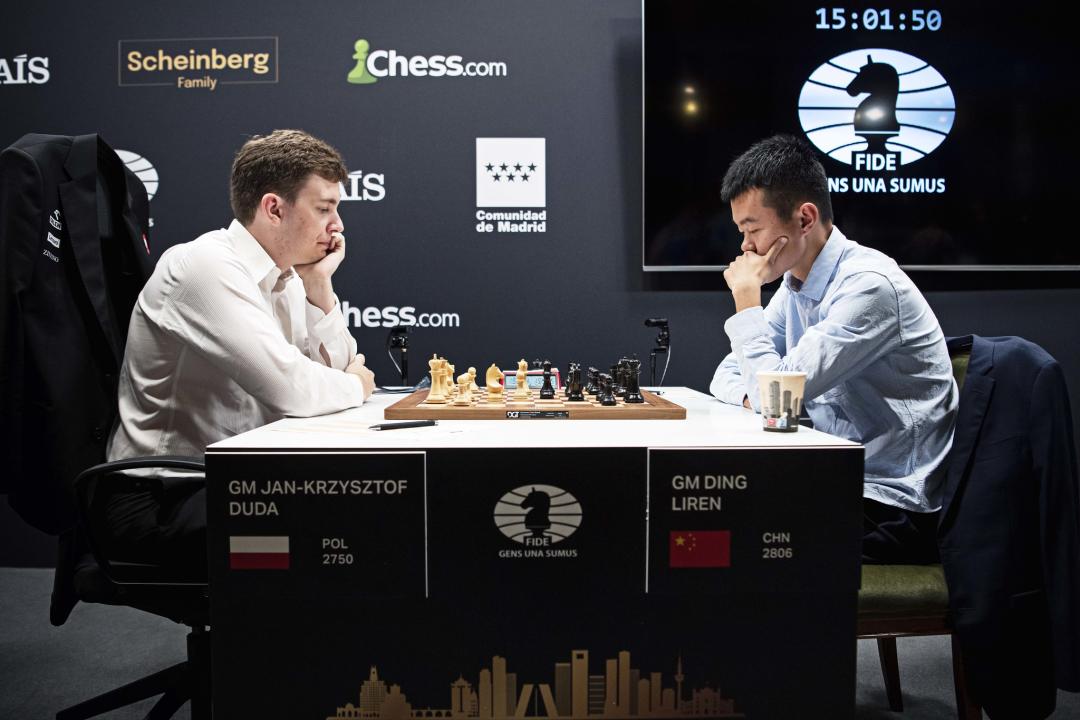 Finally, in a game that our guest commentator GM Jacob Aagaard describes as “never having really gotten started,” Ding Liren stabilized the ship, drawing against Jan-Krzysztof Duda with the black pieces.

Pairings for round three, which kicks off at 9 a.m. EDT on Sunday, June 19: