Chess players in the 19th century wanted a rule that addressed endless, unproductive attempts to reach mate -- mostly by players who lacked the skill to do so. The 50-move draw rule was one way to deal with this problem, going through its own evolution as a rule to determine when a 50-move count could be demanded.

Among those grounds included by English Master George Walker in The Chess Player in 1841 was "perpetual checks, or reiterated attacks involving the same forced moves in answer." Later in 1857, Hoyle's Games: Containing the Rules for Playing Fashionable Games described a similar type of draw: "When both players insist on making the same move respectively, neither willing to change his mode of play."

These early rules were too ambiguous for proper enforcement, however, and later attempts were made to provide clarity on dealing with repeat moves. Adding impetus to the development of these rules was the appearance of time limits in chess games, around the 1860s, since players might force repetitions to gain on the time control.

The Second American Chess Congress in 1871 began with a regulation proposal stating if both players repeat the same move or series of moves five (5) times in succession, either player could declare the game a draw – though this was later amended to three (3) times in succession. The Third American Chess Congress in 1874 continued with that resolution "That a repetition of three (3) moves by each player be declared a draw game, on demand of either.”

The Programme of the London 1883 International Tournament included this rule, which was later observed by the British Counties’ Chess Association in 1886:

"The Chess rules adopted for the Tournament are the International Code as laid down in the last edition of the German Handbook, with the addition that if a series of moves be repeated three times the opponent can claim a draw."

The ambiguity within this wording is complete, the least of which was precisely defining a "series of moves.” But the London 1883 meetings ultimately anticipated the modern rule, adopting "Rules for Play by Time-Limit" which were then published as the "Revised International Chess Code." Within the London 1883 tournament book was this rule:

"If the same position occurs thrice during a game, it being on each occasion the turn of the same player to move, the game is drawn."

William Steinitz felt that intentional repetition was a legitimate way to gain on the time control, but observed that, while rules about three or six repetitions might be added to specific tournament or match regulations, the general code of chess laws still used the 50-move rule to cover such situations. For his 1886 World Championship match with Johannes Zukertort, the two players agreed that "If both players repeat the same series of moves six times in succession, then either player can claim a draw."

By 1897, published codes of chess laws were consistent in giving the triple-occurrence of positions (not moves) as basis for a draw. The triple-occurrence rule has since been further clarified, defining the identity of positions as including pieces of the same color on the same squares (i.e. two positions might still be identical if White knights are on e4 and g5 in both positions, even if the knights had swapped places in their intervening moves); and the possibility of castling or en passant must be the same. This last provision creates some interesting possibilities where positions may look identical, with the same side on move, but are different because of different possibilities of castling and en passant. Consider the composed following position, with White to move: 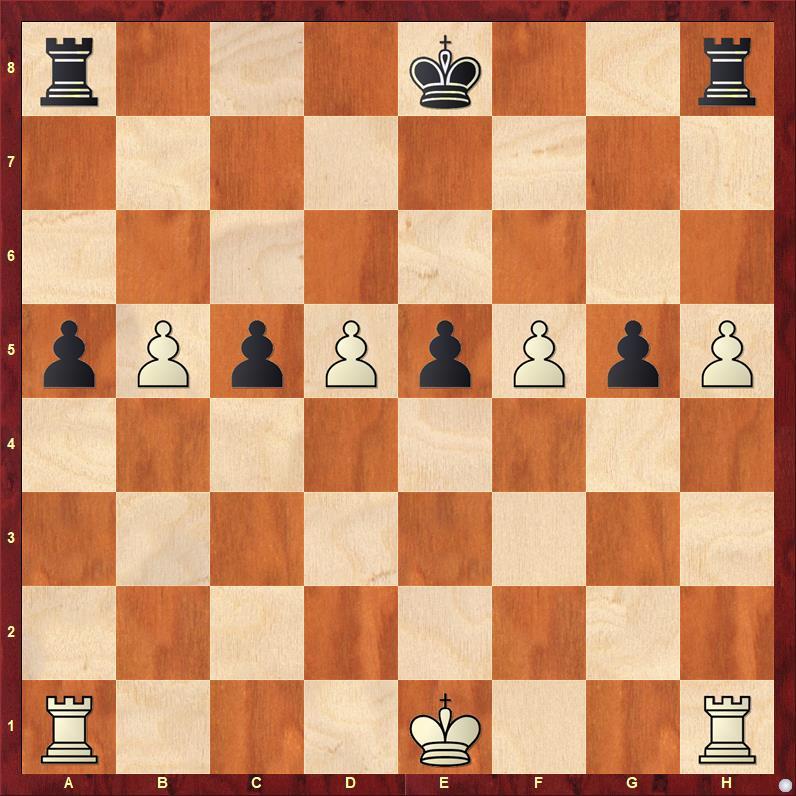 This configuration of men can be any of 80 distinct positions, depending on whether both, either, or neither 0-0 or 0-0-0 is legal for each side; and also whether any of the Black pawns moved two squares on the previous move, giving additional possibilities of en passant captures, or no en passant capture if Black's last move wasn't a two-square jump of a pawn.

Many modern players still think in terms of repeated moves instead of repeated positions. I won the 1983 SC correspondence chess championship thanks to a strong opponent's confusing these ideas. He made no attempt to vary his replies to my series of repeated moves, in order to gain time for analysis of a complex endgame. But he overlooked that the position from which the series began had been reached by a pawn move. So the succeeding two series of repeated moves, produced three identical positions. When I surprised him with my draw claim, he first disputed but then acknowledged, while admitting the endgame was probably a draw anyway. I won the tournament by a half-point over him and two others. More recently as a tournament director, I ruled in favor of a disputed triple-occurrence claim, as the opponent had confused the idea of repeated moves with that of repeated positions. A spectator (after my ruling) insisted that it is repeated moves -- until I showed all of them the rulebook!

The 50-move rule and the triple-occurrence rule have some features in common. Applying to both rules are the actions of any capture or pawn move, which not only stop the 50-move count but also break the chain of any past repetition. Also, the complete repetition of a position creates a new position that is not analytically quite the same as the first such position, since possibilities of a draw claim by triple-occurrence or 50-move count will be different in the second such position's total tree of variations.

The two rules differ, however, in two subtle ways. First, if two positions in a game are identical, except that castling is possible in the first position but not in the subsequent identical position (e.g. if the King moves away from and back to its original square); or, if an en passant capture is possible in the first position of a 50-move count (having begun after the opponent's pawn move) but not later in the count -- such differences would prevent the positions being identical for a triple-occurrence claim, but would not interrupt a 50-move count.

In no-draws chess, this rule…

In no-draws chess, this rule will become: Any player that repeats a position loses.

The concept is that, if there are no draws, a player must always be playing to win. Repeating a position is not making progress, so the player loses.

It doesn't really change the game, except to take away hope of a draw from a player who is not winning, which is the point of no-draws chess, anyway.

But the inability to repeat…

But the inability to repeat a position would actually be a *radical* rule change. You'd have "ko fights" as in the game of go. And chess is (I think) not as accommodating to interesting "ko fights" as go is. (The board gets progressively emptier in chess, progressively fuller in go.)

I understand that perpetual…

I understand that perpetual check by the same piece is not allowed in traditional Chinese chess (Xiangqi), but there's no penalty; the checking player must vary the move. I think that prohibition wouldn't work in international chess, with the significant differences in the rules (notably, our king is not confined to a fortress, as it is in xiangqi.) Perpetual checks in chess often don't legally limit the king's replies; in some cases they limit the king by allowing the checking player to mate if the king tries to escape the checks.