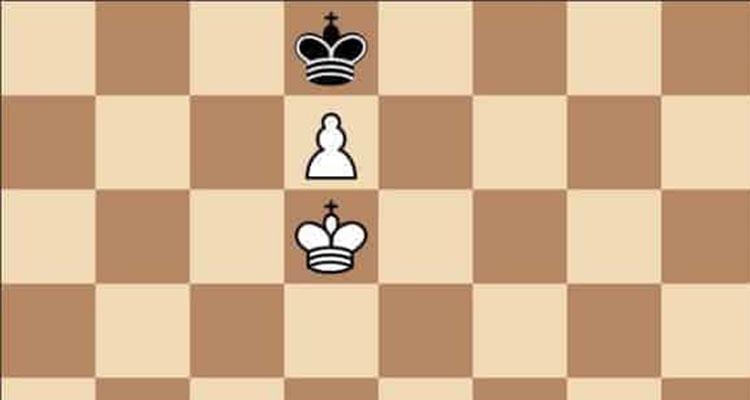 In his book The Famous Game of Chesse-Play in 1614, Arthur Saul wrote a chapter titled "The diversity of Mates, and which are worthy of praise, or disspraise," and the section was pertinent to both his attitude and the influence on the stalemate rule. 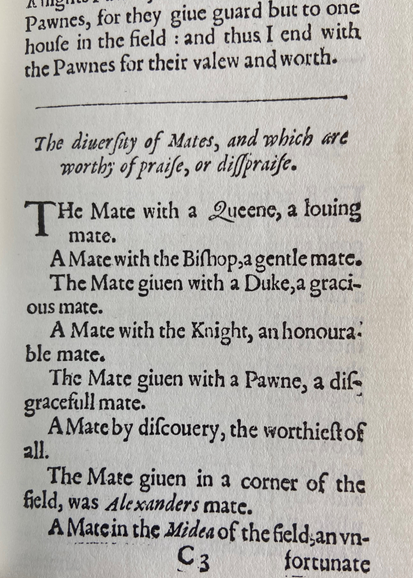 Image Caption
The diversity of Mates, from "The Famous Game of Chesse-Play" by Arthur Saul.

Saul referred to a mate in the corner as Alexanders mate. He called mate with the queen a loving mate, while mates with the “duke” (rook) were gracious, the bishop gentle, and with the knight, honourable. And he referred to checkmate by discovery the worthiest of all.

Saul also implied criticism with the delivery of two specific mates. Any mate that was not recognized by the player delivering it was referred to as a blind or darke mate. He noted that some considered a blind mate as a loss by the giver, but Saul called it a valid checkmate -- despite its being "shameful."

And in Chapter XV, Sault writes "a stale is very dishonourable to him that giveth it" adding:

"... A stale is a lost game by him that giveth it, and no question to be made further thereof.”

He concludes by saying that players who give stalemate "purchase unto themselves such shame, which will not after be put away without much blushing." 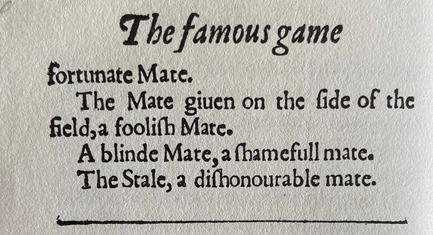 John Barbier’s reprint of The Famous Game of Chesse-Play in 1640 had a similar section on the "diversity of Mates,” but with some change in adjectives: mates by the queen became "gracious," and the knight, "gallant.” In the mate section, Barbier also included "The Stale, a dishonourable Mate,” adding that stalemate is a loss for the giver, because

"he hath unadvisably stopped the course of the game which is to end only by the grand checkmate."

Barbier went on to state that a stale is a "Monstrous mate, that is, a mate, and no mate, or end of play, but no end of the game." In other words, Barbier thought the player giving a stale should be punished with a loss, because he'd prevented further play in a game before it was properly ended. However, despite “stale” being the only type of mate on his list that was not a checkmate, Barbier’s inclusion of “stale” on his list of “mates” helped influence the term “stale-mate” in later English chess literature.

English master Philip Stamma in 1745 composed a position in which White wins either by checkmate or by forcing self-stalemate, depending on Black's move. Peter Pratt was still defending that stalemate was a loss by the giver in 1805, saying it was reasonable to have a rule that helped the weaker player, presumably since the possibility of giving stalemate was more likely for the player with the stronger position.

Other ideas around the time thought that differentiating between giving stalemate, versus being stalemated, added another challenge to skill. The idea that a player could win by forcing a self-stalemate was put forth in some English literature as a legitimate stratagem, considering several different endgame scenarios where a player might even "win by a stale.”

The rule that stalemate would be a loss for the giver hung around in England and the U.S. until the early 1800s. Elsewhere, stalemate was evolving into a draw, though some regional variants was referring to stalemate as a win for the giver.

Highlighting the difference between rules, consider this position: 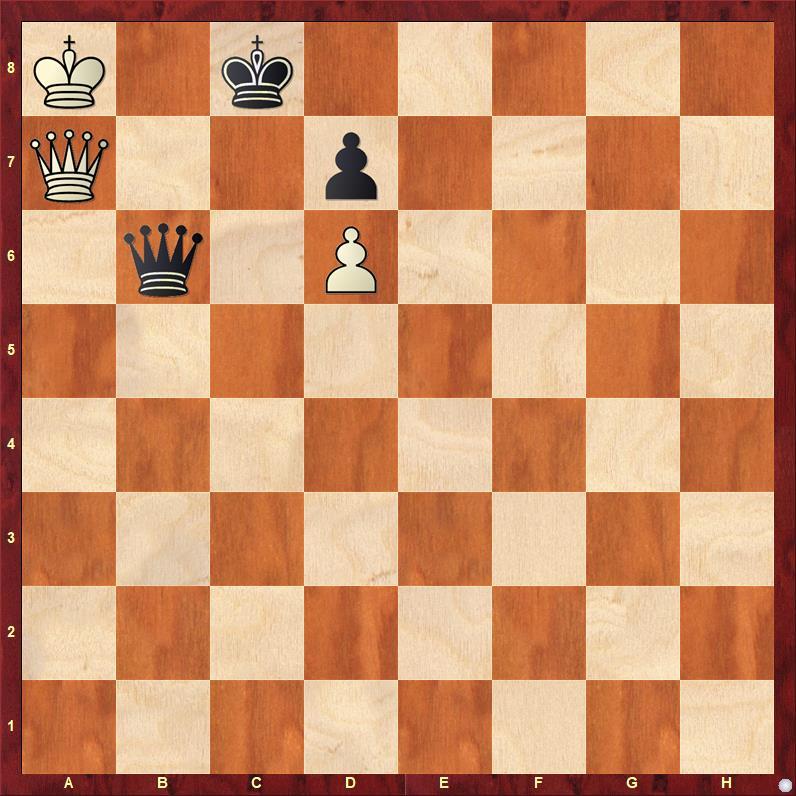 Image Caption
White to move: To stalemate, or self-stalemate?

Some English books were advocating the standardization of stalemate as a draw as early as 1808, a suggestion that generated much debate, but by the mid-1800s, stalemate had become a draw everywhere.

Some argue that stalemate…

Some argue that stalemate should become a form of checkmate as a way to reduce draws. I disagree. Such a change would have no effect on the non-competitive draw done just for tournament points. It would also not effect colorless draws that result from balanced openings that fail to leave weaknesses that can be attacked in the middle game. Stalemate sometimes produces interesting competitive outcomes, and the composition world would lose a lot if the stalemate draw rule were lost.

To see how treating…

To see how treating stalemate as a win would affect composition, consider the following little position: White: king on h6. pawns on f7 and d7. Black: king on h8. knight on f8. White to move, wins by underpromotion to either bishop or knight. The knight promotion is the more interesting. Since the Black king has no moves, White wins by avoiding a capture of the Black knight, and forcing it to move (knights can't make waiting moves). If 1 d8(N) Ne6; 2 Nc6 (not Nxe6 stalemate) Nf8; 3 Ne5 wins. Or 1...Nh7; 2 Ne6 Nf6; 3 f8(Q)+ Ng8+ 4 Kg5 wins. (Kg6 stalemates). Such subtleties from even simple endgames are involved in many fascinating endgame studies, where stalemate possibilities often figure in.