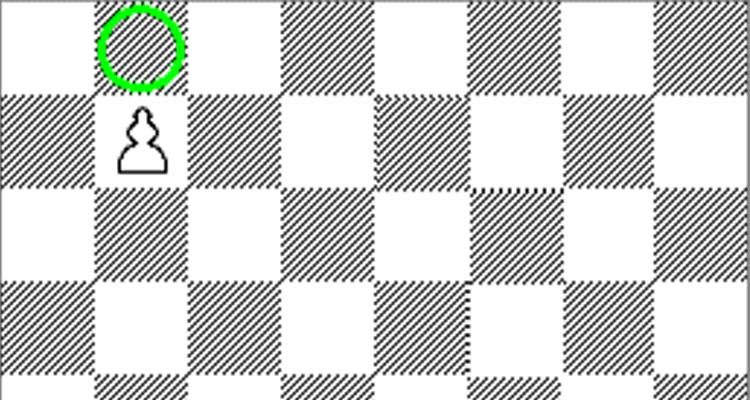 Throughout the known history of chess, the only direction a pawn has been able to move is forward. The only variable left was what happened when a pawn reached the final rank, and various promotion rules existed in different regions. In India, a pawn could promote only to the piece that had originally occupied the file it had reached: h-pawns promote to rooks, g-pawns to knights. Another variant included a promoted pawn making a "joy leap" back to its starting square. In traditional Chinese chess, pawns do not promote, though they can move sideways through the opponent's half of the board.

In medieval Western chess, pawns could promote only to a queen – a weak piece at that time, with only the ability to move one square diagonally. But when the queen assumed her modern abilities around 1475, a pawn promoting to the now-powerful piece had a significantly increased impact on the game.

By the 1800s, two main rules on pawn promotion co-existed. One rule limited promotion only to a piece that had already been captured. Thus, a player could never have two queens or more than two of any other piece. If no pieces had been lost, plausible in some openings, the rule was that the pawn remained suspended on its promotion square – unpromoted – until a piece was captured. 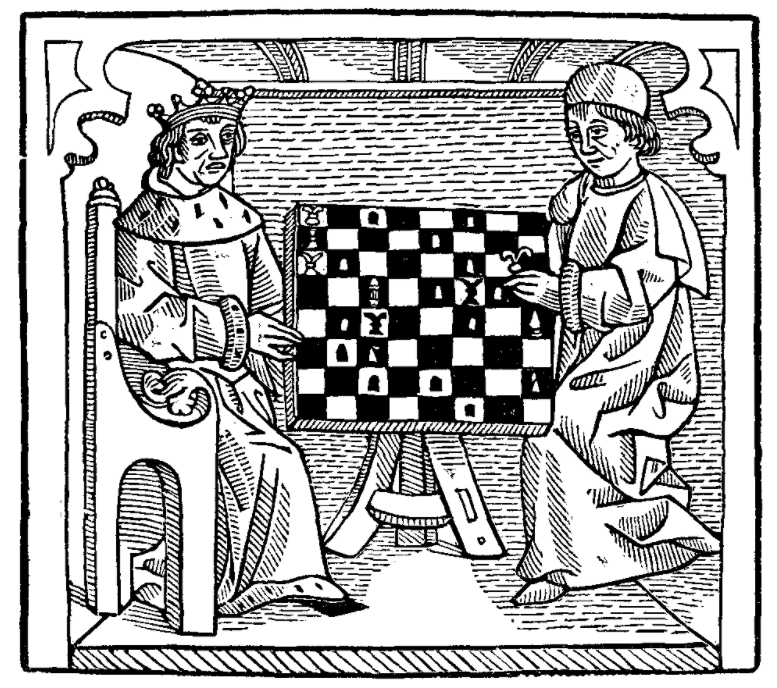 Many considerations were influenced not just by suspended pawns, but even pawns that were nearing promotion. Since a suspended pawn was ordered to promote to the first captured and available piece, hurrying a sacrifice exchange had additional strategic benefit: forcing promotion to a minor piece and not waiting for a stronger piece to leave the board first. Other strategic quirks in the rule saw benefits in sacrificing a major piece, just to have it available for promotion on a following move.

Modern rules now dictate that a promoted pawn becomes the new piece at the end of its move, so it cannot move with its new status before the opponent’s reply. But some rules in the first part of the 1800s played that a suspended pawn, upon being promoted, could not move until each player had moved once more. This, however, created the equivalent of a temporarily "pinned" piece – though with nothing pinning it.

Other rule variations even allowed a suspended pawn to move immediately as the new piece, in effect earning promotion and then moving again – both before the opponent had the chance to reply! Ercole del Rio, an influential Italian author and lawyer in the mid 18th century, favored this rule of promoting "only to lost piece," and provided this opening variation illustrating the effect of a suspended pawn and its sudden promotion.

Del Rio’s variation represented a player gaining two consecutive moves: the first action places the new piece on the promotion square, and the second action moves that new piece -- both actions in a single turn. The variation is as follows: 1 e4 e5; 2 Qe2 Nf6; 3 f4 exf4; 4 d4 Nc6; 5 c3 g5; 6 g3 fxg3; 7 Bxg5 gxh2; 8 e5 hxg1 -- and the pawn is suspended on g1, since no Black piece has been captured. Now, White would be amiss to capture 9 exf6+, abruptly transferring the captured knight to the suspended g1-pawn before its move, and allowing Black to play 9...Nxe2! 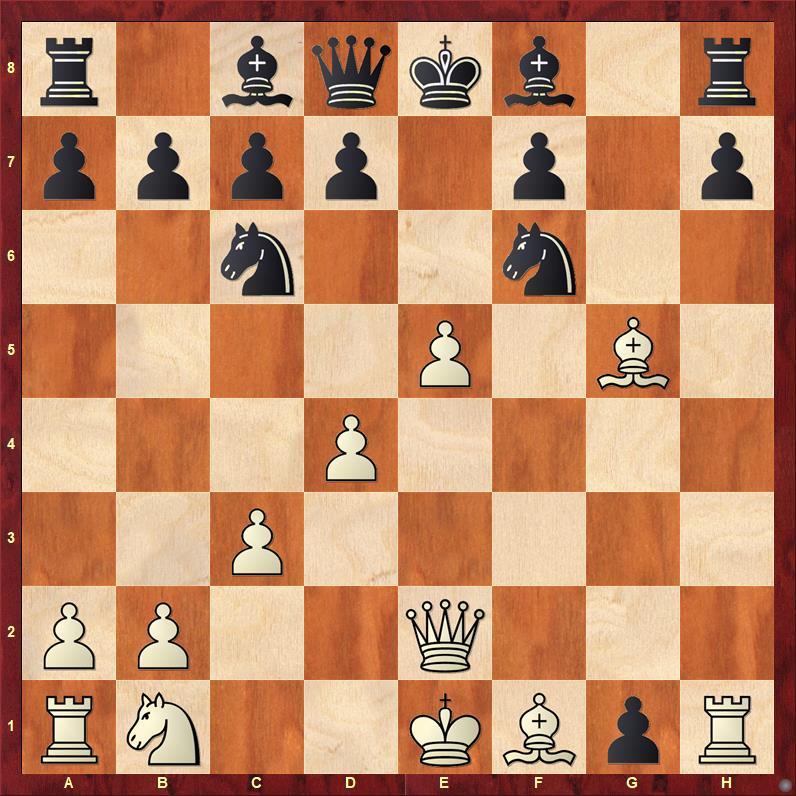 Image Caption
In Ercole del Rio's 18th century example, since Black has not lost any pieces and has none available for promotion, the g-pawn is left suspended. But with White to move, 9. exf6+ would transfer the knight to promotion and produce 9. ... Nxe2!

Compositions using these promotions only to lost pieces helped expose some absurdities behind the rule. Around 1800, German-Austrian master Johann Baptist Allgaier composed a position that showed White leaving two pieces en prise during a series of checks – though the presence of a suspended pawn meant neither capture was allowed, because promotion left Black in check with White on move. More puzzles showed suspended pawns delivering checkmate by promoting to any piece, minor or major.

The rule of promoting only to lost pieces presented other curiosities. Queens could be sacrificed and reincarnated in succession. There was also a downgrading effect on promotion itself: if only bishops were captured from the board, promotion was thus forced to a bishop. But confusion began when pawns on dark squares were promoting to light-squared bishops.

Both Del Rio and Theory of Chess author Peter Pratt supported the rule in the early 18th century, suggesting that players needed to manage exchanges with future promotion possibilities in mind. But the two differed when promotion led to having two bishops on the same color: Pratt allowed the promotion where del Rio prohibited, even if the situation meant leaving a pawn suspended.

The alternative idea was what would become our modern rules of promotion, and the idea of promoting only to lost pieces was soundly rejected by these authors. In the Art of Chess-play: A New Treatise on the Game of Chess, English author George Walker in 1841 argued that, under the lost-piece promotion rule, losing the ability to promote to a second queen – since the first queen was still on the board – was too big a penalty compared to the difficult task of promotion.

"The power granted by the law, of your having two Queens on the board at once should you push a Pawn to the eighth square, has been much cavilled at by various authors; but in my opinion presents by far the best means of meeting the difficulty, consequent upon the every-day occurrence of queening a Pawn before any piece is lost."

But the lost-piece promotion rule lingered for decades, and was still observed in parts of Italy and Germany through the rest of the 19th century. Howard Staunton was a huge champion of the modern rules during this time, repeatedly informing correspondents that a player may have two queens – once noting in exasperation how often he had to point this out. The modern promotion rule finally became standard at the end of the 19th century.

Discrepancies, of course, remained in the rules. In 1862, the British Chess Association created a rule that allowed pawns to stay permanently suspended on the last rank, a dummy piece with no possibility of future moves or promotion. The practical effect of this rule was virtually nil, and Staunton focused heavy criticism on the BCA code and its dummy pawn. Advocates published a simple composed position as justification, which showed a dummy pawn saving a draw by aiding self-stalemate.

But American chess composer Sam Loyd published a mate-in-three problem in 1898 that proved the opposite effect, showing White promoting to a dummy pawn – which controls no squares – and preventing Black from saving the draw by self-stalemate for two moves, then allowing checkmate on White's third move. Regardless, the BCA's dummy-pawn rule had no impact on either competition or composition before disappearing from future codes. 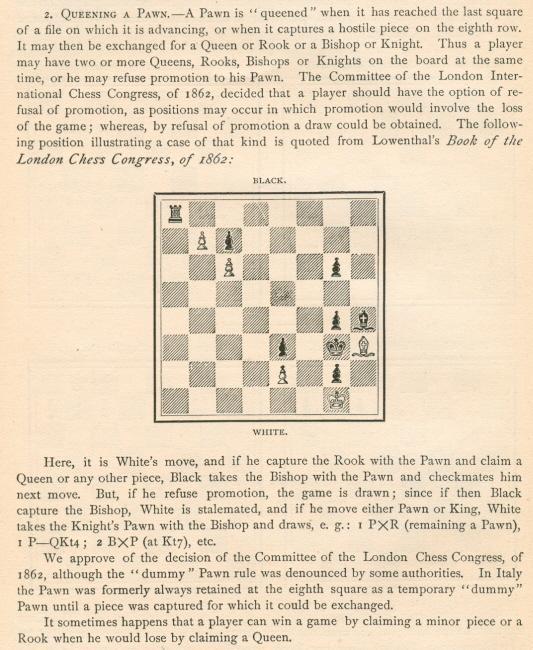 Issues even arose that concerned whether a pawn could promote to an opponent's piece! Despite any obviousness to the idea, early rules neglected to clarify this point and loopholes were left. Walker in 1841 described an important match where a player accidentally replaced his promoting pawn with his opponent's queen, and the opponent insisted that the accidental promotion stand! The ruling was referred to nearby players, whose opinions were divided since the published rules didn't specify color.

When I met the notorious IM Norman Whitaker, a young 80 years old in 1970, he told me that in his youth some still argued that a pawn could promote to the opposite color. The idea came up in compositions, mostly "trick" problems, such as one presented in the February 1906 issue of Lasker's Chess Magazine.

One lasting issue concerned how to represent a second queen or a third piece, and the earliest suggestion I found using an inverted rook for a second queen was in an encyclopedia of games in 1897 – which also suggested putting a ring around the pawn.

John, I just taught a lesson…

John, I just taught a lesson that summarized 3 of your 4 articles. (I had already done an entire 12-weeks on Draws). I composed 3 puzzles that only worked if you utilized old/variant rules. The kids enjoyed it a lot!

Thanks for this series!

We are all just pawns in the…

We are all just pawns in the game of life.

I played a master once,…

I played a master once, where I was about to promote a pawn to a knight and mate him. Of course, my opponent saw the mate and resigned two moves earlier.

The only iron rule I have as…

The only iron rule I have as a retro problem composer is that I *never* represent a promoted bishop by the actual captured bishop from the other colour squares. :-) That is a recipe for confusion. Instead, promoted pawns get quarters underneath them to indicate they have new status. If there are lots of pieces promoted to different kinds then I use white/black dice set 1...4 for the main pieces.

I was self-talught in1970 using books by Tal Fisher and other grandmasters
In more than one text,
It taught of a rule governing pawn play on the 2nd&3rd and the 6th &7th rows.
It’s stated that when a pawn reaches the 3rd or 6th ramks,depending which color one is playing, that the pawns, if any,of the opposition on the 2nd&7th ranks again with respect for one’s playing color, that are in capturing position,MAY NOT proceed PAST that pawn upon the first move following the advance of the pawn to 6th&3th ranks! Whereas the 2nd&7th ranked pawn may immediately capture the interloping pawn ,it may not itself otherwise proceed immediately to the 6thand5th nor the 3rd and 4th ranks
The pawns are freed from this restriction on the 2nd move following .
This was not a mistaken understanding of the en passant procedure that occurs on the 5th&6th and the
3rd&4th ranks.
No w I can’t find it in print nor anyone who has any knowledge of such a rule.
Can anybody please help me with a way to collaborate
earl teachings?