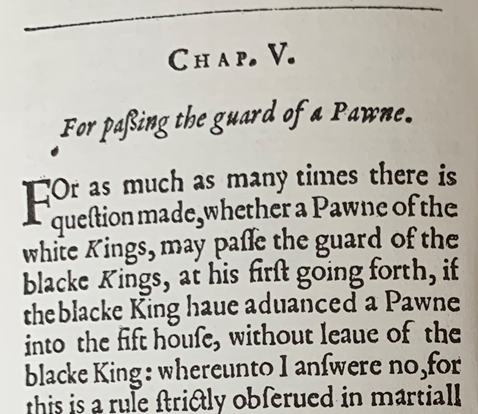 As early as 1200 A.D., pawns have been able to move forward two squares forward on their initial move. The point of contention was if a pawn could use this two-square move to bypass the control of an opposing pawn, and various local rules resulted over the centuries. Some regions simply did not allow the two-square move at all, if it meant passing an opposing pawn; others would not allow the move while defending a check.

In his book The Famous Game of Chesse-Play in 1614, Arthur Saul wrote that a pawn had to have the "leave" of the enemy king to pass, without clarifying what was meant by such "leave.”

By the early 19th century, two variants existed that either allowed, or disallowed, the en passant capture. The move was present in England and its surrounding regions, while capturing en passant was not allowed in Italy and Germany. The rule difference had its effect on opening theory; for example, in Italy after 1. e4 e6 2. d4 d5 3. e5, Black could play ...f5 without the threat of immediate capture. 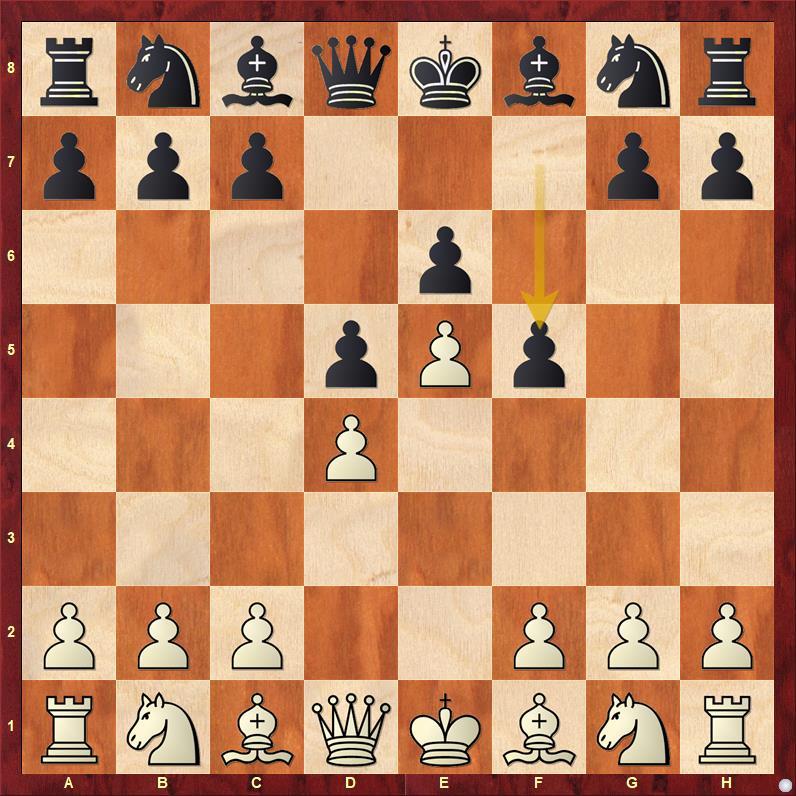 Image Caption
Without the en passant rule in early 19th century Italy, opening theory was much different after 3. ... f5.

Capturing en passant brought with it some unique features. For starters, it's the only way a pawn can attack an opposing pawn, without having a reciprocating attack possible for that opposing pawn. Additionally, it's the only move possible for just one turn, after which it becomes impossible. Thus, some combinations that rely on an "in-between" move may not work when an en passant capture is involved. Lastly, en passant is the only move that can give double-check without the moving piece delivering one of the checks.

Before the modern rule became universal in the mid-1800s, debates occurred about its proper form in those regions where en passant captures were allowed. Some questioned why it applied only to pawns: After all, pawns pass pieces, and pieces pass each other with impunity -- so why couldn't pawns? Curiously, some printed rules failed to specify that it was limited to the immediate reply, though the idea was expressed clearly by some, showing it was presumably understood. But only in recent decades the rule was clarified to state that, in a triple-occurrence draw claim, a position is not a repetition of an earlier position, if an en passant capture was possible in that first position. 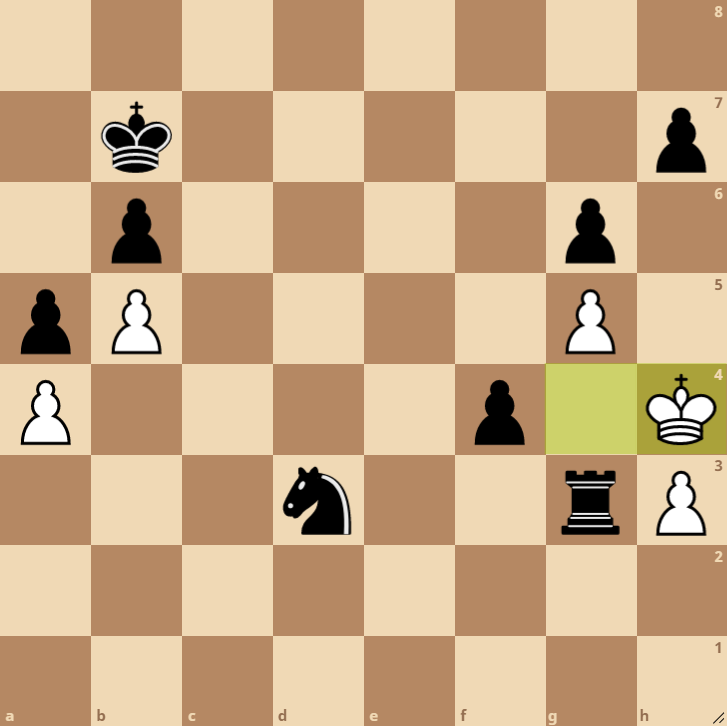 Image Caption
Black to move .. the knight must deliver check, but the White king is in stalemate .. how to proceed?

There was also much debate regarding whether en passant capture was a "privilege" and thus could be refused, if it was the only legal move to prevent a self-stalemate. That debate would seem to be academic, as such a position would be of rare occurrence, though composed problems and studies presented these issues with more clarity. 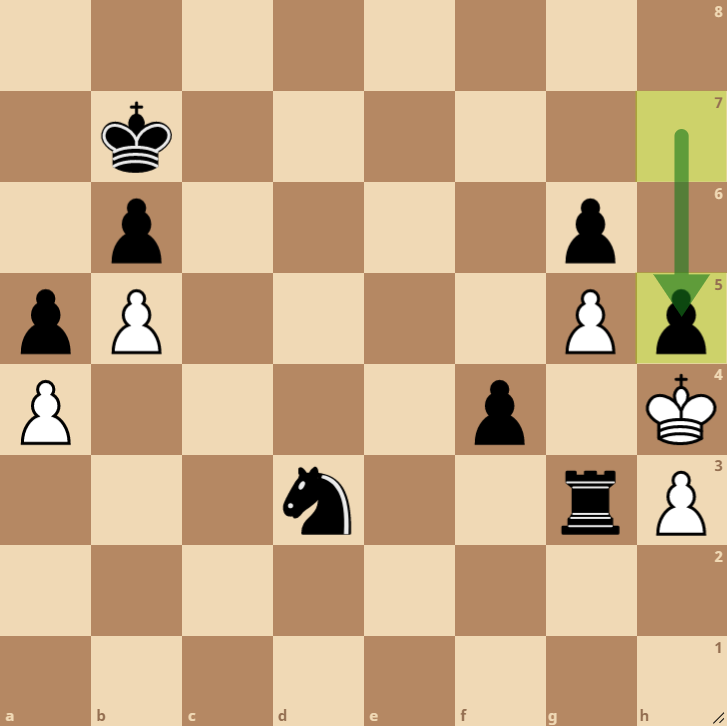 Image Caption
If en passant was a "privilege," meaning it could be refused as some argued in the 19th century, this game would be drawn by stalemate!

By definition, a composed position has no preceding moves, so having an en passant capture as the first move of a solution became an issue, when it couldn't be known if the preceding move was a double-jump of a pawn. Some problem-composing contests simply prohibited having an en passant as the key move. One composing contest in 1883 allowed an en passant capture as the key move, but only if the position could not have been reached by any hypothetical game in which the capture was illegal. The contest rules stated This device, however, shall under no circumstances enhance the value of a problem.

Great article! In the chess…

Thanks for your comment. Yes, if the rule were still in place allowing an en passant capture to be refused if it were the only move, Black could circumvent the issue by ...h6. The position in the article was taken (in truncated form) from a game I played in 1970, but we edited some of the explanatory text for brevity. John McCrary

I've just encountered an 18th-century Italian problem in which Black played ...g7-g5, passing a White pawn on f5. If an en passant reply were legal, it would quickly solve. But since the en passant capture wasn't legal by the rules of the region, the problem was solved by other moves.

As noted in my article, some…

As noted in my article, some 19th-century writers questioned why pieces can pass other pieces and pawns, and pawns can pass pieces, without needing an en passant rule; but only the situation of pawns passing pawns needed a special rule. For example, why can't a bishop on f4 capture a pawn moving g2-g4 en passant on g3, while a pawn on f4 can do so? I think the answer is found in these unique properties of pawn moves: 1) that a pawn once passed can't retreat to correct the problem (as a piece can); 2) and a passed pawn can greatly enhance its identity by promotion, giving its passing another pawn an extra significance. The "next-move" requirement can create some unique variations. In a game I played in 1973, I had (as Black) a rook on b1 and a pawn on b4. White had pawns on b2 and c2, and his king on g2 with nothing else on the second rank. If White played Pc3, I could win 2 pawns by Rxb2+ and bxc3. But he played Pc4. Now Rxb2+ eliminates the en passant possibility, and thus my chance to win 2 pawns.

I see you note that there…

I see you note that there was a debate as to whether en passant was restricted to pawns or was available to other pieces as well. Do you have any more details on that (which regions used which rules; or who debated each side; or anything)? Even links to possible sources would be appreciated.

I've found no places where…

I've found no places where pieces could capture en passant. But I've seen two cases of writers who questioned the existence of the en passant rule, using the fact that it applied only to pawns as an argument in favor of passar battaglia (no en passant allowed). Circa 1801, Ercole del Rio, on p. 6 of "The War of the Chessmen" said" "It is far from clear why soldiers, but not their officers, should have such a privilege." A similar argument was made in "Studies of Chess" (1805).

I suggest you buy a copy of "The War of the Chessmen" edited and translated by Christopher Becker and published by Caissa limited Editions, 1984. USCFsales.com had at least one copy for sale at last year's US Chess meeting. I also suggest you buy a copy of "The Classical Era of Modern Chess" by Peter J. Monte, published by McFarland & Company. It has an extensive review of the early uses and evolution of both en passant and the pawn's double-jump. Of course H.J.R. Murray's classic "A History of Chess" also deals with these things. Or you can contact me at chessrjm@gmail.com Regards, John McCrary