Faced with the choice to fight or regroup, GM Ian Nepomniachtchi chose the latter in the tenth game of the 2021 FIDE World Chess Championship. After a bloodless draw the score stands at 6½-3½, leaving World Champion GM Magnus Carlsen just a win (or two draws) away from retaining his title. 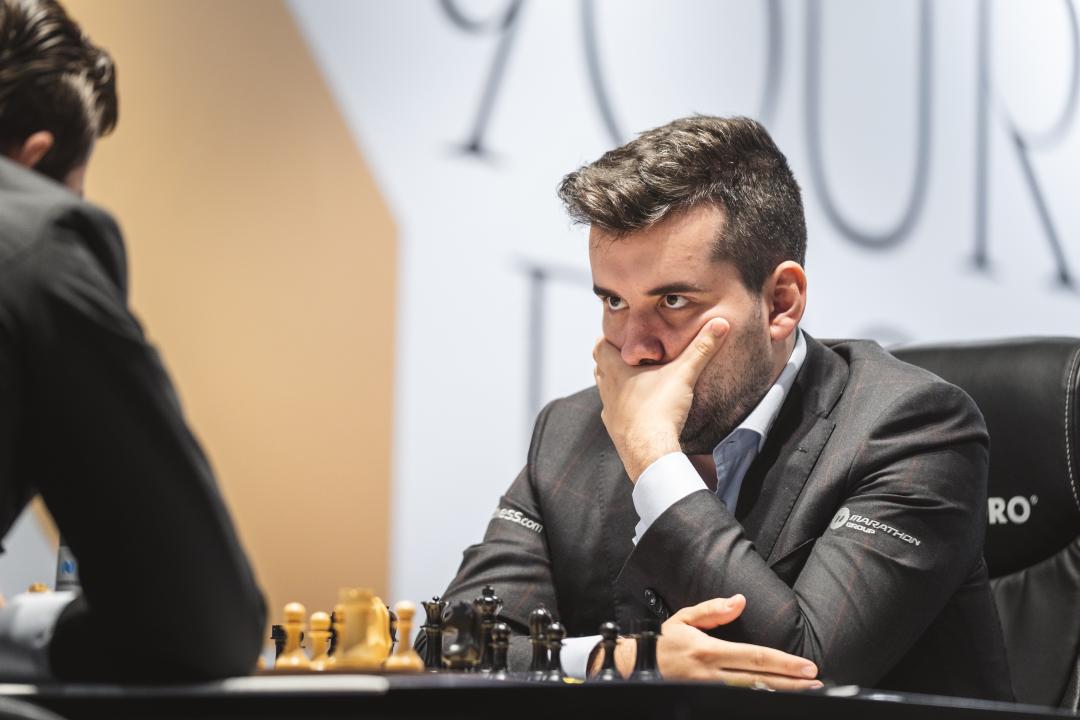 Down three games with only five to play, it is a bit of a mystery as to why the challenger chose to defend the Petroff against Carlsen’s 1. e4. Adding additional confusion is the chess.com interview with GM Sergey Karjakin, one of Nepo’s seconds and apparently a disciple of Radio Jan, who claimed that Nepomniachtchi was a dynamic player who could not be contained.

But a Petroff it was, with Carlsen choosing 4. Nd3 as played in his 2018 match against GM Fabiano Caruana. After a mild surprise with 7. ... Nc6, Carlsen had to make a choice: should he play 8. Be3 with some ambition for a complex fight, or simply continue to try to trade queens with 8. c3? 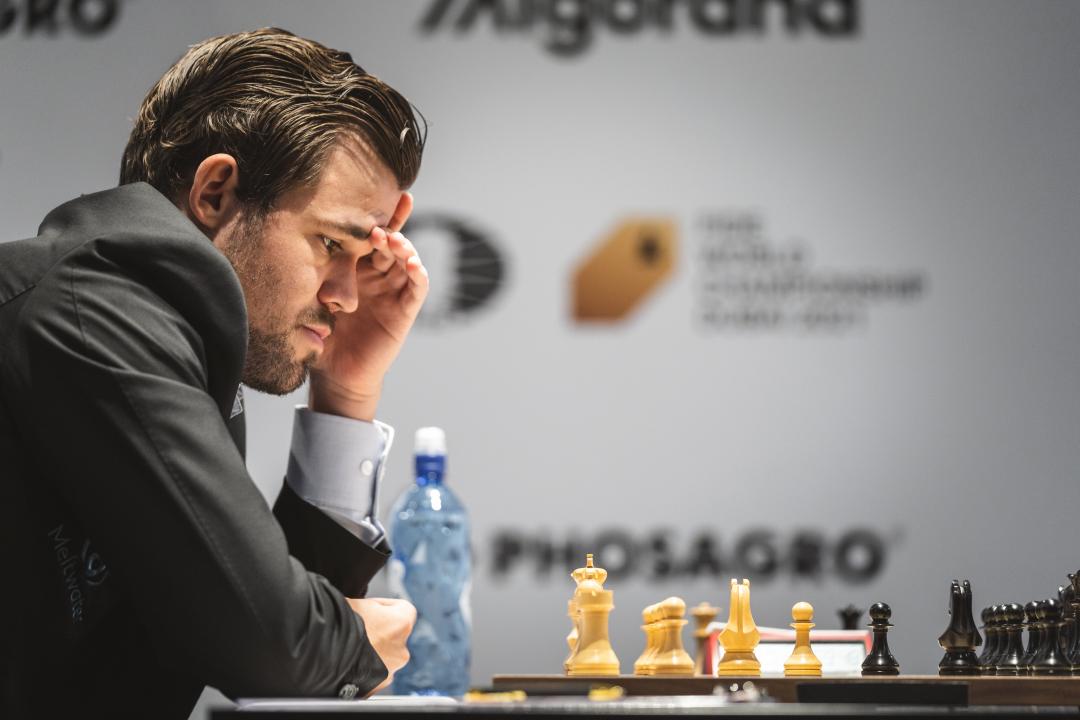 With a draw an entirely acceptable result given the match situation, Carlsen was only mildly interested in spicing things up. Starting with the queens, the pieces were traded off with startling rapidity, and the inevitable handshake came as soon as the rules allowed.

In the post-game press conference, Nepomniachtchi admitted that his goal was perhaps to hold today and try to win on Friday. He has not given up the belief that he can come back, calling a question from moderator GM Maurice Ashley about his chances “absurd.”

Thursday sees a rest day, followed by three games on Friday, Saturday, and Sunday at 7:30am Eastern. Down three games with just four to go, the odds are long indeed for Nepomniachtchi, but stranger things have happened...

Readers kindly note ROUND SIX :THE DUBAI IMMORTAL SIXTH "GAME,,,, Because the match produced already a staggering one in a billion duel to be seriously considered by many as the greatest world title game ever played /definitely watched live ...
move by move by more viewers than any other game in
world chess history... it provides the comfort of immortality...Mr. Ian Nepomniachtchi after this horrendous world championship defeat will gradually realize it does not matter one iota....he belongs to the ages..he contributed mightily to "the Dubai Immortal game" round six and he knows it.......The game will follow him wherever he goes.,,to airline terminals, coffee shops ,strange new cites and nations.,huge chess exhibition crowds ..dinners with Magnus Carlsen and his entire family in future years ..known the world over for The Chess Mona Lisa... Go ahead and laugh. at this ..it is no joke . the game will go through time long after both players are but sand ,dust in the wind. It quite simply explains why chess is played and always will be.
I told Fischer point blank at Graham Hall/ Louisiana State University/ Baton Rouge March 1964 that though Fischer felt "I still like my game against Donald Byrne" when queried as to his best game ever ..." No way" I said instantly ,,,it was the shocking win Fischer had just played against (unbelievably Donalds brother) Robert Byrne: that would "live forever" :I did not see everything ..I just tried to keep the game alive , you know, going along ,avoiding a draw" Fischer told me. I was right about that game and this one too ...
Dubai goes into the chess hall fame for this one game . And the World Chess Federation (FIDE) remarkable no- talk -all -action disgustingly nice world class gentleman-statesman president A, Dvorkovich received this veritable gift from the gods...... absolutely unbuyable,totally unpredictable ,off the chart world chess promotion beyond measure. No person in chess history has merited a mighty promotional helping hand more.He really got the guns of Leningrad this time.
Jude Acers/ New Orleans

In that post-game 10 press…

In that post-game 10 press conference clip, why was Magnus implying that working with Kramnik would be an annoyance?? Can someone explain?

.Reply for 'Confused" At…

.Reply for 'Confused"
At YOUR SERVICE.. The Greatest ever chess performance in world chess history was absolutely the defeat of world champion Kasparov by endgame and "simple" innovative Berlin defense theory wizard V.Kramnik (MR.KRAMNIK GOT TO PLAY THE MATCH ONLY BY AN ABSOLUTE MIRACLE AFTER LOSING THE QUALIFICATION MATCH TO ENORMOUSLY TALENTED SHIROV (another day ,another unbelievable tale)..winning one million dollars..the championship of the world and DID NOT LOSE A SINGLE GAME... only to enter a savage period of dreadful sometimes chronic illness that literally flattened him on the floor for 6 months at a time... Mr. Kramnik was being shadowed all the while by a boy traveling out of a van with his incredible incandescent beacon cheerleader- driver father all over Europe ..while massively reading everest Garry Kasparov My Great Predecessors All volumes along the way ..having
really examined such terrific historical theory , stunned in awe of both Kramnik and Kasparov...really well schooled in all essential great chess books already ...Carlsen stepped away when he suddenly AGE 18 WORLD RANKED NUMBER ONE Pearl Spring super grandmaster tourney Nanjing China 2009 ... had by then some real deal public torchy testy comments with Kramnik."the days are over when your verdict or analysis is accepted without checking "....call it simply a changing of the guard. I call it two different immortal people. One more comment allowed please ,,in 68 years of chess play (46 states ,20 nations all over the world)...I have never once seen a young player so entranced with the endgame /simple advantage ala Dvoretsky /Petrosian/ Karpov style.... I have seen them all from Botvinnik and Fischer to the Firouzja..Carlsen really is the greatest grandmaster of all time. He has one and only one secret...he absolutely ADORES at the board chess combat more than any great player who ever lived. (Fischer for example almost never played at all and never won a single grandmaster closed tourney in his whole career ......his best Piatigorsky Memorial. ferocious second place behind Spassky . Fischer was invited to hundreds of such events but actually did not love sitting at the chess table at all(Ed Edmondson)...Carlson almost pitches a tent there.) Carlsen can outsit any great player in history. His "DUBAI IMMORTAL" ROUND 6 game really is going to be considered the greatest game of all time by historians albeit with heated debate.Just under one million people reportedly saw it and knew it was a monster. Video replay of the "Dubai Immortal game is reportedly also huge...Already people recall instantly to me , eyes glowing,,,the very second they saw a first move /where they were as they tuned in for the chess journey of a life time.It is by no means a perfect game but what chess really is .. an all out thriller diller savage Tolstoy boxing novel,People were paralyzed and joked online (190 fide registered chess nations!)
"5 appointments just thrown out the window! " Oh my god .no car wash or lawn mowed today! "
It really was THE CHESS MONA LISA.
Jude Acers/New Orleans