Another "Atypical" Draw in Dubai

In Round 2 of the 2021 FIDE World Chess Championship, current champion GM Magnus Carlsen unleashed a rare idea in the Open Catalan, giving up a pawn and then an exchange in an effort to defeat his challenger, GM Ian Nepomniachtchi.

But Nepomniachtchi held strong, and after a very complicated middlegame, he gave back the exchange to reach a drawable, if pawn-down, rook and pawn ending. This leaves the match tied at one point for each player after two rounds. 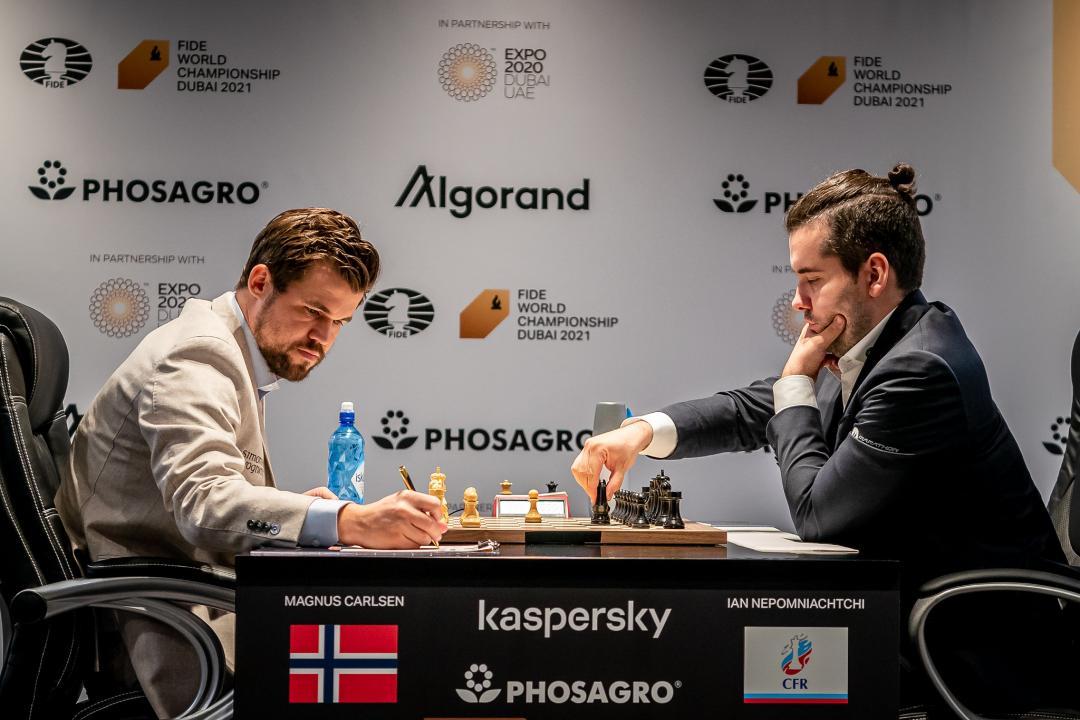 Today’s guest commentator, WGM Katerina Nemcova, has all the details in her analysis, a Chess Life Online exclusive.

If fans were not yet excited about this match, I think these first two games showed that Magnus and Ian are ready to bring the “fire on board!”

Notes on this game: first, I suspect the opening selection was a double surprise! Ian decided not to go for the Grünfeld, and Magnus chose to play the Catalan! This was one of the rare instances where super-GMs are not blitzing moves right out of the opening, and instead have to work over the board to navigate the new territory. During the press conference after round two, Magnus admitted that he blundered when he allowed ...Nac5, after which [he] “was trying to hang in there, not to lose."

Now for the game!

In the post-game press conference, Carlsen described the first two match games as “atypical,” in that the roles played in the match by many pundits has (at least for now) been reversed. The Twitterati assumed that Nepomniachtchi’s relative skill in dynamics would lead him to try to set fire to the board, but in both games thus far, it has been Carlsen who has been willing to give material for compensation and complications.

This view was echoed by GM Levon Aronian in a post-game interview with chess.com:

Saturday’s game began with a bit of a surprise, as Nepomniachtchi allowed Carlsen to play the Catalan. This has not typically been part of the Russian’s opening repertoire — he has tended to prefer active defenses like the Grunfeld — but he does have some experience in these lines, most notably in online rapid events this year. 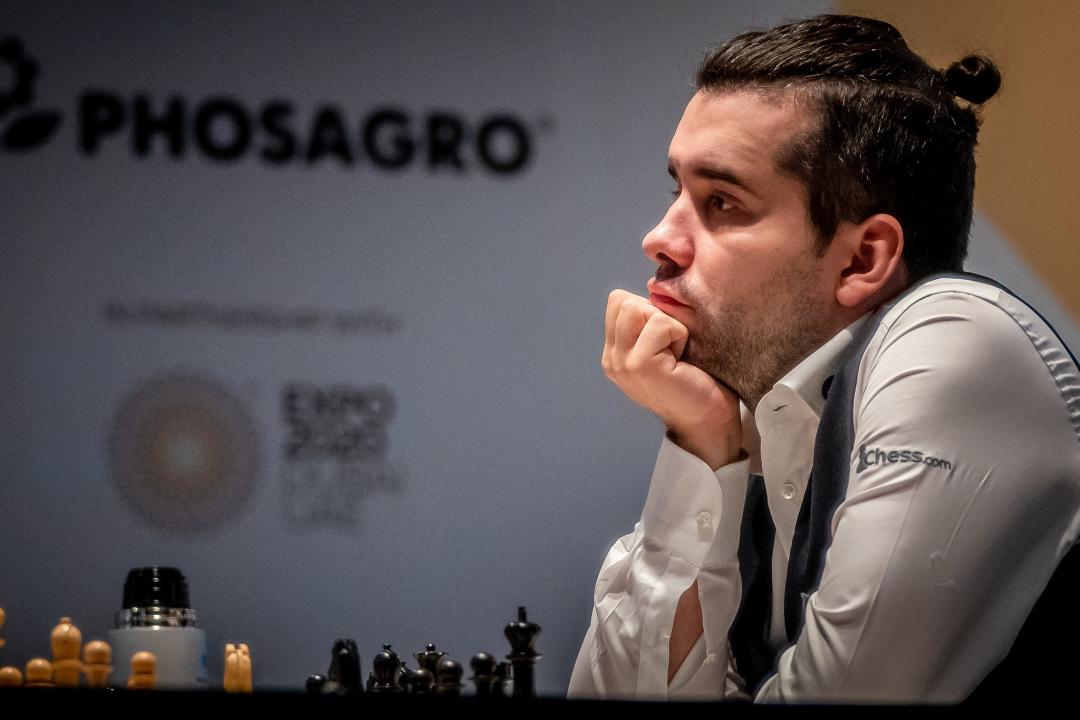 But with 7. ... b5, Nepomniachtchi went for one of the most dynamic variations in the Open Catalan, and after the trendy 8. a4 Bb7, he surely had some new idea in mind.

Carlsen short-circuited that plan with the rare 8. Ne5, a move that has seen limited practice in over-the-board play, and almost none in correspondence games. It has been tried a bit (what hasn’t?!) in high-level online blitz, but with 11. ... Qd7, Nepomniachtchi appears to played the first new move of the game. 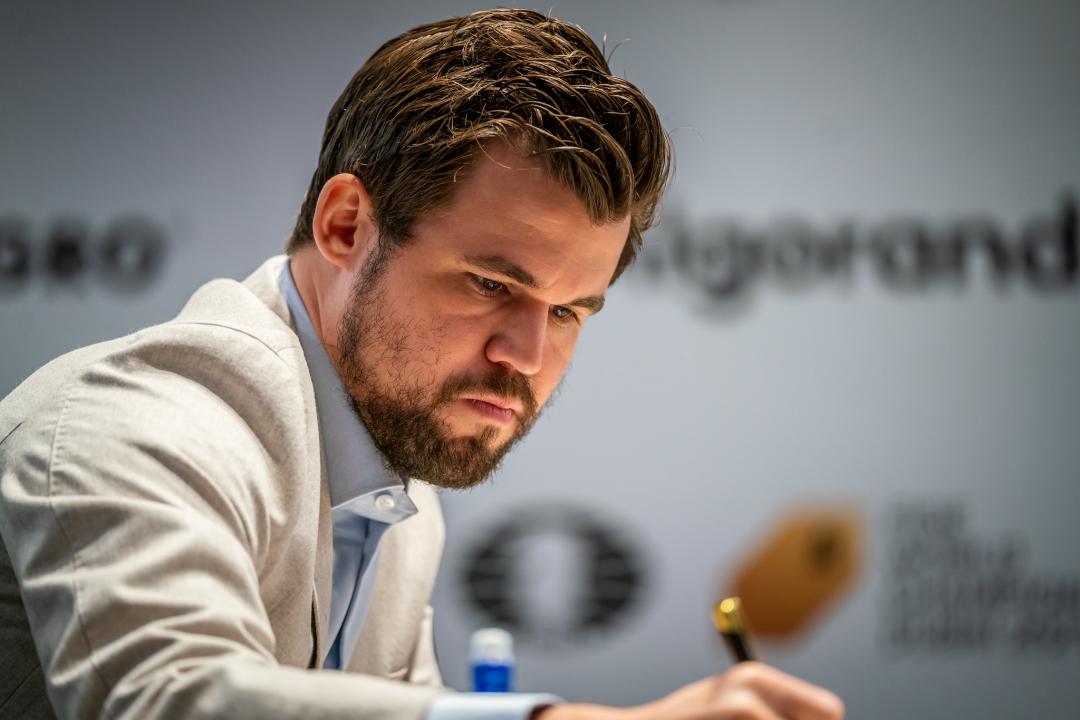 With 14. e5! Carlsen managed to find a path to putting maximum pressure on the Black position, although 17. Nxf6 might have improved over his 17. Ne5. The first critical moment of the game appears to have come after 18. ... Nac5 — a move that Carlsen says he missed in a post-game interview — when the always demonstrative Nepomniachtchi seems to have rated his chances.

Carlsen uncorked 19. Nd6, offering up an exchange in return for this beautiful knight on d6, and Nepomniachtchi grabbed the material in a quick string of moves. The resulting positions were immensely rich, and the various commentators on the competing streams were all enjoying the unfolding analysis. “Friend of the page” Ben Johnson summed it up best with this tweet:

Speaking in the post-game press conference, Nepomniachtchi admitted that thought Black was nearly winning after 23. ... Ba8, but “[he] should give huge credit to Magnus [after 24. Be4!] because he played in a very interesting way.”

The middlegame unfolded with both sides winding their way through the complications, and perhaps the final critical position of the game came on White’s 37th move.

Here Carlsen passed up the stronger 37. Rc1 Rd8 38. c5 (per Caruana on the chess.com broadcast) in favor of 37. Qd4, a decision that Carlsen came to criticize a bit in the post-game press conference. It allowed Nepomniachtchi to give back the material and rid his position of the d6-knight. GM Erwin L’ami was surprised that Carlsen allowed this exchange, but ultimately agreed that perhaps there was no real hopes for a win anyway.

The final result? A solid fighting draw, one worthy of two of the strongest players in the world.

Sunday sees Nepomniachtchi take the white pieces for game three of the match, to be followed by a rest day on Monday. Will he “come out of his shell” a bit and put some pressure on Carlsen, or will the world champion continue to dictate the terms of the battle? Check back with us tomorrow to find out!