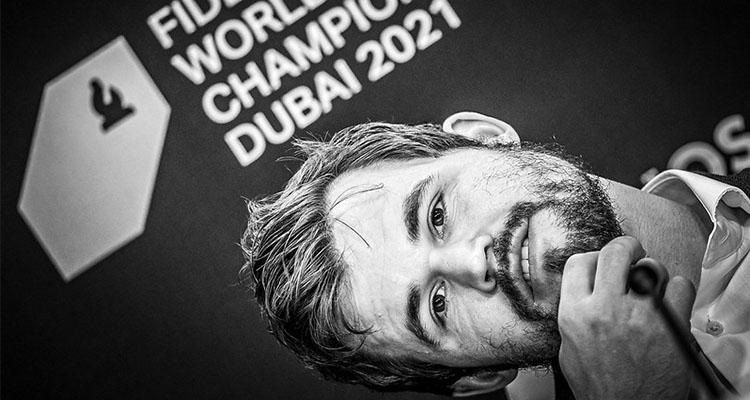 Since the 2021 FIDE World Championship was technically scheduled to play one game per day, after Friday’s Game 6 marathon that stretched a record 136 moves and past midnight in Dubai, one might forgive World Champion Magnus Carlsen and his challenger GM Ian Nepomniachtchi for a rather subdued return to the board on Saturday.

Today’s Game 7 was the quickest played so far in this year’s world title fight, with both players admitting to "low energy" entering the day, eventually going through the endgame motions just to reach 41 moves to officially agree on a draw.

Nepomniachtchi commanded White for the fourth time this match, and for the fourth time probed Carlsen’s defenses within the Ruy Lopez. Carlsen showed confidence in his last setup as Black, responding to 8. a4 with the same ...Rb8 he played last in Game 5, while on Saturday it was Nepomniachtchi who first took the game anew with 11. d3. For the most part, Game 7 was played logically straightforward, almost to the description of streamlined liquidation. White passed on any opening tension with three consecutive knight moves and a trade at 14. Nxf6+, and after Nepomniachtchi’s longest think of the game produced 20. Rec1, the game was headed for simplification.

After delivering the first win of the match on Friday, Carlsen maintains the World Championship lead through seven games by a 4-3 score. He will take the White pieces for Game 8 on Sunday, beginning at 7:30 a.m. eastern. 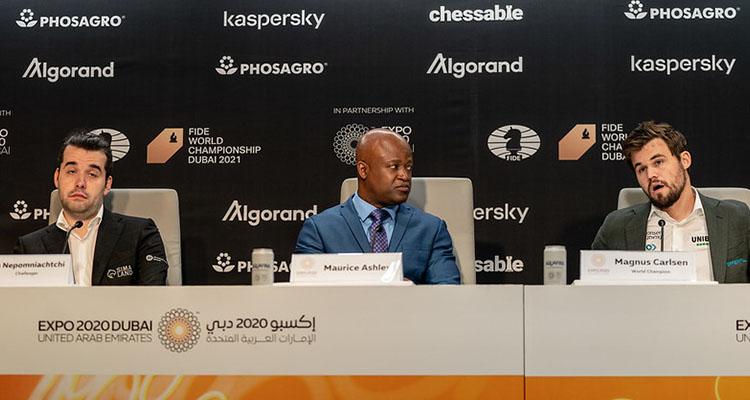 Here for a deep dive into Saturday’s Round 7 of the 2021 FIDE World Chess Championship is US Chess’ youngest-ever IM Christopher Yoo, who just notched his third GM norm last week at the US Masters Championship at the Charlotte Chess Center. He writes:

After a tough loss yesterday, Nepo is probably feeling in low spirits. It seemed that he wanted to not take any real risks today. Carlsen also seemed fine with drawing as Black, so this led to a rather uneventful game. Nepo did try a new move in the opening, but Carlsen was very well prepared and was never at risk of losing. I hope tomorrow there will be more fire on board for the spectators and the players!