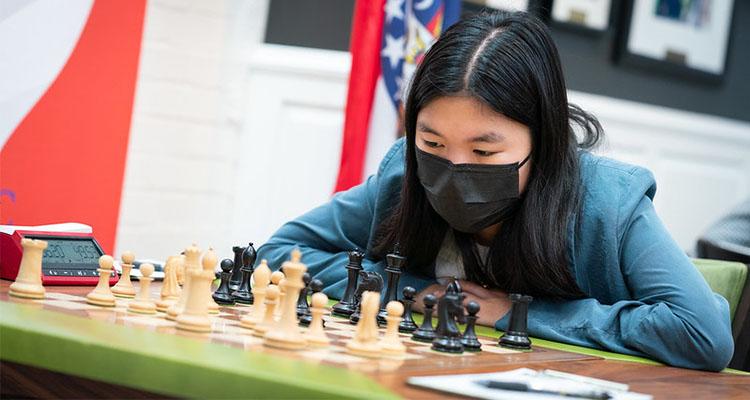 Image Caption
Massachusetts 18-year-old IM Carissa Yip will be crowned the next U.S. Women's Chess Champion after clinching the national championship with a round to spare on Sunday. // photo Lennart Ootes, Saint Louis Chess Club

We know American chess will soon be ruled by a new queen. We’ll have to get back to you on the next national champion.

US Chess is certain to see IM Carissa Yip earn her first title as the next American Women’s Champion. The Massachusetts 18-year-old clinched the U.S. female national championship with a round to spare in the Saint Louis Chess Club, posting her fifth consecutive win to tally an unreachable 8.0/10 over the field on Sunday afternoon. Yip scored with the Modern Defense over IM Nazi Paikidze in the penultimate Round 10, leaving any final-round drama on Monday in a race for second place. Come Tuesday, she will be crowned. 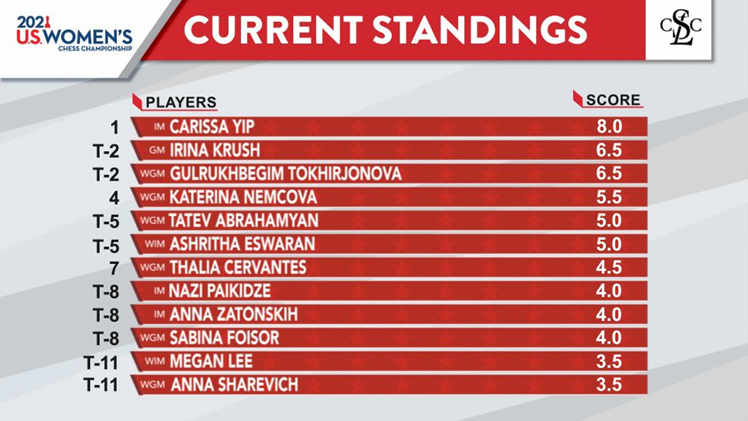 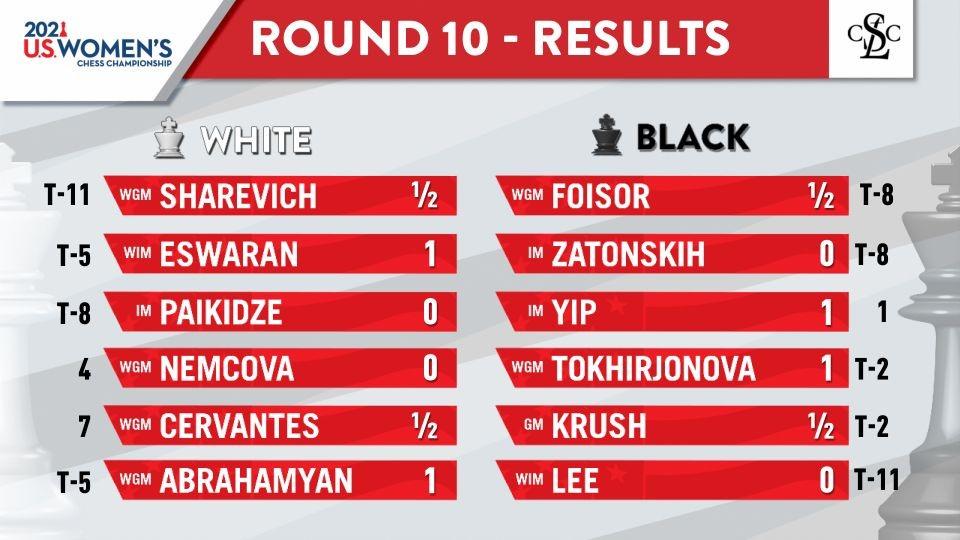 The final round of the 2021 US Chess Championship, however, is a different story. Six Grandmasters – half the field – play on Monday with real chances to become the next American king. A three-way tie for first place, and another three-way pack chasing by a half-point, did little to untangle itself through a dangerous weekend for the national championship.

But now there’s a monster awake in St. Louis: American top-seed GM Fabiano Caruana has returned to the US Chess Championship lead, back from the dead after dropping into the standings’ basement at the tournament’s halfway point. After seeing his first-ever back-to-back losses in the national championship, Caruana has risen back to the top with a 3.5/4 effort and twice served defeat to tournament leaders, including Sunday’s win as Black over GM Alex Lenderman in a King’s Indian Defense. 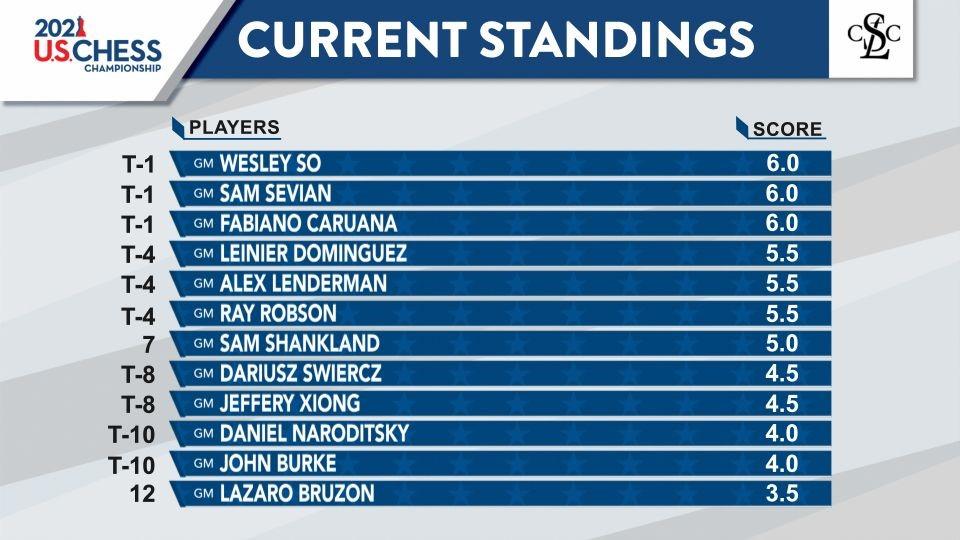 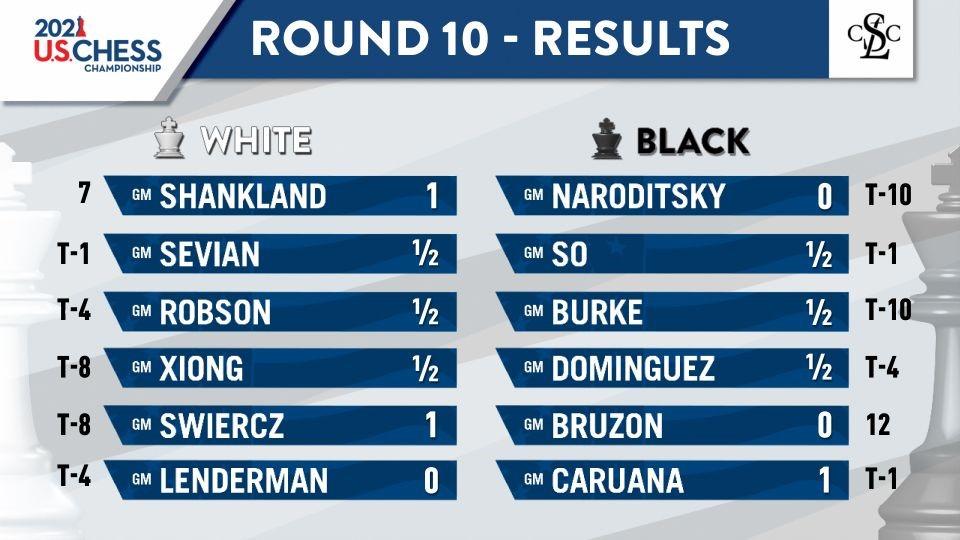 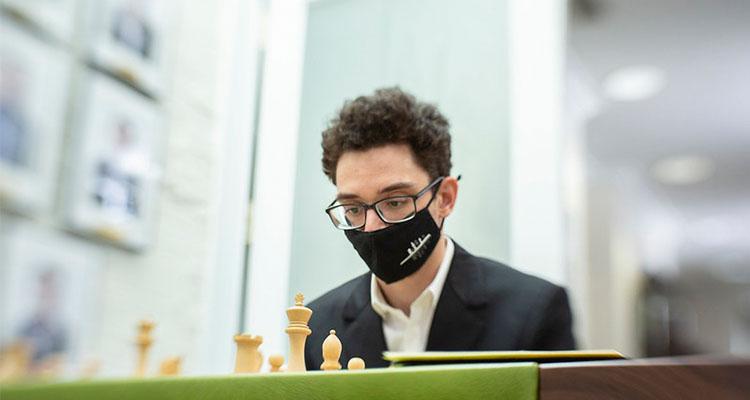 In a pivotal penultimate round that saw all other tournament leaders clutch to draws, 2019 U.S. Women’s Champion WGM Jennifer Yu holds our hands through Caruana’s monster comeback in CLO’s Round 10 Game of the Day. 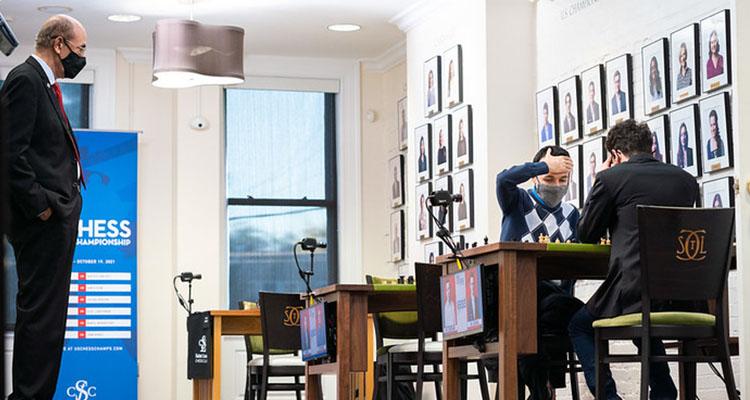 Image Caption
GMs Alex Lenderman and Fabiano Caruana play in the penultimate round of the 2021 US Chess Championships in the Saint Louis Chess Club. // photo Bryan Adams

The final round of the 2021 US Chess national championship will be played Monday at 1:00 p.m. central in the Saint Louis Chess Club, and broadcast live alongside GM commentary by Maurice Ashley, Cristian Chirila and four-time US Chess Champion GM Yasser Seirawan on YouTube and the official event website.

If necessary, a playoff for first place is scheduled Tuesday at 1:00 p.m. Tiebreaker formats may be found in the tournament regulations, and are as follows:

If two or more players are tied for first, a playoff shall be held to determine final standings among all tied players.

Two Players: The tie will be broken with a two-game rapid match (G/10 +2 delay). If the contest is still undecided, the match will be decided by an Armageddon Game.

Three or Four Players: If there are three or four Players tied for first, the Players shall contest a rapid round robin (G/10 +2 delay). If no clear winner is produced, the remaining tied players shall contest a blitz (G/3 +2 delay) a) round robin (if three or four players remain tied) or b) 2-game match (if two players remain tied). If the contest is still undecided, the match will be decided by a series of Armageddon Games.