The online team tournament brought together universities from around the world to compete in a four-on-four rapid format. Universities were allowed to enter multiple teams, with four players and one alternate per squad, though only with one team with a rating average over 2200 was allowed.

Played over two days on February 6-7, the event accommodated college students from all continents. The KCF University Cup proved a great success, gathering:

The tournament was broadcast live on Twitch to tens of thousands of unique viewers and was widely spread through social media. KCF Young Stars alumni GM Daniel Naroditsky was joined by FM Peter Giannatos to cover the action through all nine rounds.

Garry Kasparov addressed all participants each day before the games began, and then joined the commentary during the second day and talked about a variety of subjects, from the tournament games to GM Alireza Firouzja’s meteoric rise. The former world champion spoke about many things from the chess world, and also passionately analyzed some of the games. The candid commentary can be viewed in the Day 1 Twitch broadcast and the Day 2 Twitch broadcast, with Garry Kasparov’s commentary found between rounds six and seven on the second day. 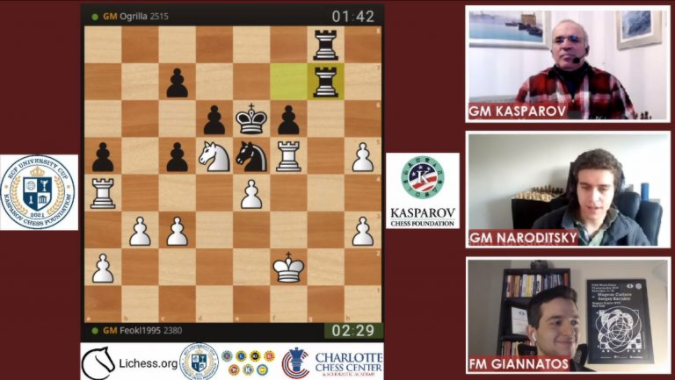 The University Cup had some clear favorites, and they certainly did not disappoint. The University of Texas at Rio Grande Valley was the No. 1 seed and scored a perfect 9/9, leaving no doubts about the best team in the event. The clear leader of UTRGV was GM Vladimir Fedoseev, who scored an amazing 8.5/9.

Second place went to the University of Missouri, a relatively new scholarship program that fielded strong grandmasters. Their second board, GM Mikhail Antipov also scored 8.5/9 and was a cornerstone of the team’s success.

Third place was decided by tiebreaks, with Texas Tech University edging out University of Texas at Dallas, Gunadarma University (Indonesia) and the University of Cambridge (England) in the final standings. The Texas Tech squad was strengthened by FM Alexey Sorokin and another 8.5/9 performance.

Many prizes were awarded, with the most valuable being first place and top-u2200 prizes, which included an exclusive online training session with Garry Kasparov himself.

The tournament was successfully hosted on the lichess.org platform. Chacha Nugroho provided the web hosting and pairing system for the event. Exceptional organization of the event included:

The KCF thanked the Charlotte Chess Center for its assistance during the event. More details and results may be found on the official website.