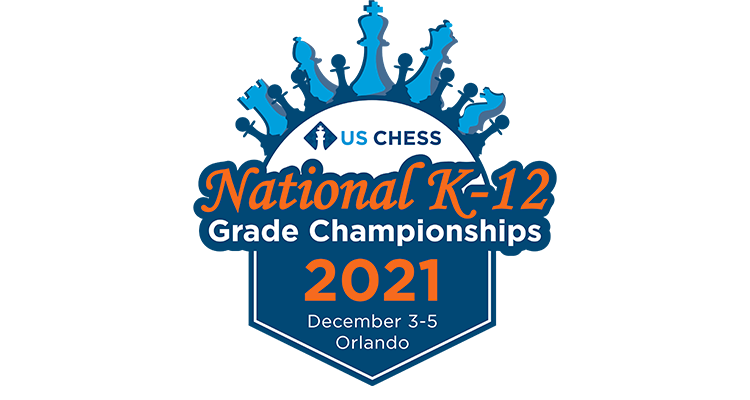 Sunday evening is set to produce the 2021 national champions across all 13 school grades, the best as decided from seven rounds of chess played across Dec. 3-5 – the first moves of the weekend coming Friday at 1:00 p.m. in Orlando.

Over 1,200 players from 43 states have turned up and stacked the competition, including several players of the 2022 All-America Chess Team – who will be honored as some of the best 18U players in US Chess on Sunday morning! That All-America list includes NM Brewington Hardaway, rated 2300 and the 7th Grade Championship’s top seed, as well as the top-seeded 9th grader FM Nico Werner Chasin -- who got his accolades rolling early, winning the 2021 K-12 Bughouse Championship along with partner NM Raghav Venkat on Thursday.

US Chess provides full coverage of the 2021 K-12 Championships, including daily reports on Chess Life Online and regular updates through US Chess Facebook and @USChess Twitter. The live moves on our top boards in each round can be viewed on www.uschess.live.

And when the championship action gets hot, US Chess goes live beginning with Round 5 on Saturday night at 6:00, with hosts GM Elshan Moradiabadi and 2017 U.S. Women’s Champion WGM Sabina Foisor streaming commentary of the top boards. Our Grandmaster commentary continues through all of Championship Sunday, both the penultimate round 6 at 9:00 a.m. and finale round 7 at 1:00 p.m., all found on www.uschess.live and Twitch.tv/uschess.

A special guest on this weekend’s live streaming will be GM Max Dlugy, a two-time U.S. Junior Champion and 1985 World Junior Champion. GM Max is in Orlando for the K-12 Championships, performing a 30-board simul, a lecture and Q&A, as well as three blitz sessions throughout the weekend inviting “all-comers.” This is a great opportunity to ask Max what it felt like to be the highest-rated blitz player in the world for five years!

Our Women’s Program Director WGM Jennifer Shahade is on-site for the return of the live US Chess Girls Club, offering game analysis for the girls and beginner lessons for the moms, as well as a series of events planned for the weekend. The 2005 U.S. Women’s Champion IM Rusudan Goletiani will stop by the club for a lecture and Q&A, the 15-time Venezuela Women’s Champion WIM Dr. Carolina Blanco hosts a Chess & Spanish class, and chess coaching duo Krista and Arthur Alton will set up a human chess game. 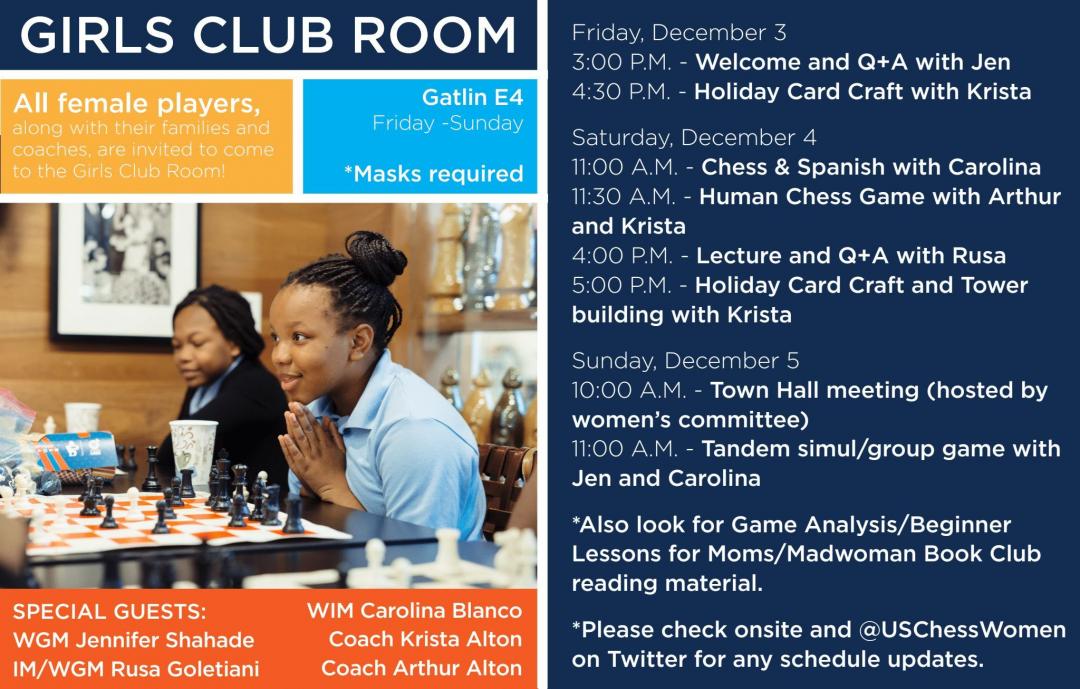 We’ve also got a Scholastic Council meeting planned with US Chess certified coach and tournament director Robert McKenzie discussing our scholastic programs, as well as two educational seminars on the benefits of chess with Korey Kormick, the technical and ratings manager for US Chess.

Good luck to all our participants in Orlando!