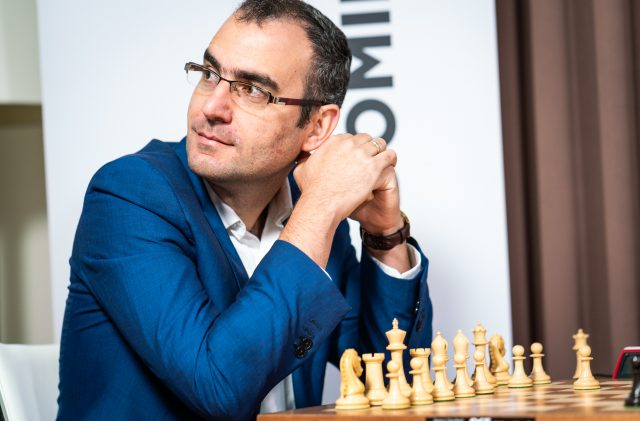 GM Leinier Dominguez at the 2018 Champions Showdown in Saint Louis. Courtesy of the Saint Louis Chess Club, photo by Lennart Ootes
CROSSVILLE, TENNESSEE: The 501(c)3 US Chess Federation is pleased to announce that Grandmaster (GM) Leinier Domínguez, originally from Cuba and currently living in Miami, Florida, has successfully switched federations from the Cuban Chess Federation and will now play under the United States flag.  Domínguez says, “I am very excited about this new stage in my career and I am really looking forward to joining US Chess. It is great to see the tremendous level that the game has acquired in the U.S. and I definitely want to be a part of it.” The 35-year-old was born in Havana, Cuba and became a grandmaster in 2001, going on to win the Cuban national championship five times between 2002 and 2016. He currently carries a rating of 2739, ranking him 20th in a world that includes well over 1,000 grandmasters. He instantly becomes one of the top players for the United States, joining recent world-championship competitor GM Fabiano Caruana (2832) and the rest of the “super” grandmasters from the U.S.: Wesley So (2765), Hikaru Nakamura (2746), and Sam Shankland (2724). Grant Oen,  the FIDE Events Manager at US Chess (the Fédération Internationale des Échecs or World Chess Federation is the official governing body of which the US Chess Federation is a member) boils the complicated process involved in a transfer of federations down to, “It requires a player and the new federation to file an application, submit documentation demonstrating residency, notify the former federation, and pay transfer fees.” US Chess Executive Board Vice President Randy Bauer enthuses, “Grandmaster Domínguez is a strong addition to the US Chess roster of world-class players. Leinier has achieved notable successes as a chess player, trainer, and author.  But perhaps most importantly for our organization’s goals, he is an outstanding ambassador for chess worldwide, and we look forward to his adding to the already rich and diverse US chess culture.” For more info: Contact: Daniel Lucas Phone: 931.200.5509 Email: dlucas@uschess.org
SHARE: