Day 3 in Rancho Mirage: Drama Builds at the Invitationals

After back-to-back double-round days in the invitationals, only one game remains before the champions are determined and the scholarships are handed out!

No event was settled with a round to spare, and only FM Ruiyang Yan, the northern California representative for the Haring, remains perfect. Today’s final games will kick off at noon PST with commentary by WGM Sabina Foisor and FM Gauri Shankar on twitch.tv/USChess.

In the Denker, IM Arthur Guo upset GM Andrew Hong in round 5 to take over sole first with 4½/5. Hong leads a group of five players with 4/5. Guo, the Georgia representative, can claim clear first if he can win with black against FM Jason Wang of Ohio. Unlike Guo’s one-sided win over Hong, he had to persevere through a difficult position late into a slow Ruy Lopez slug-fest before finally finding chances against southern California’s Tommy Wen. 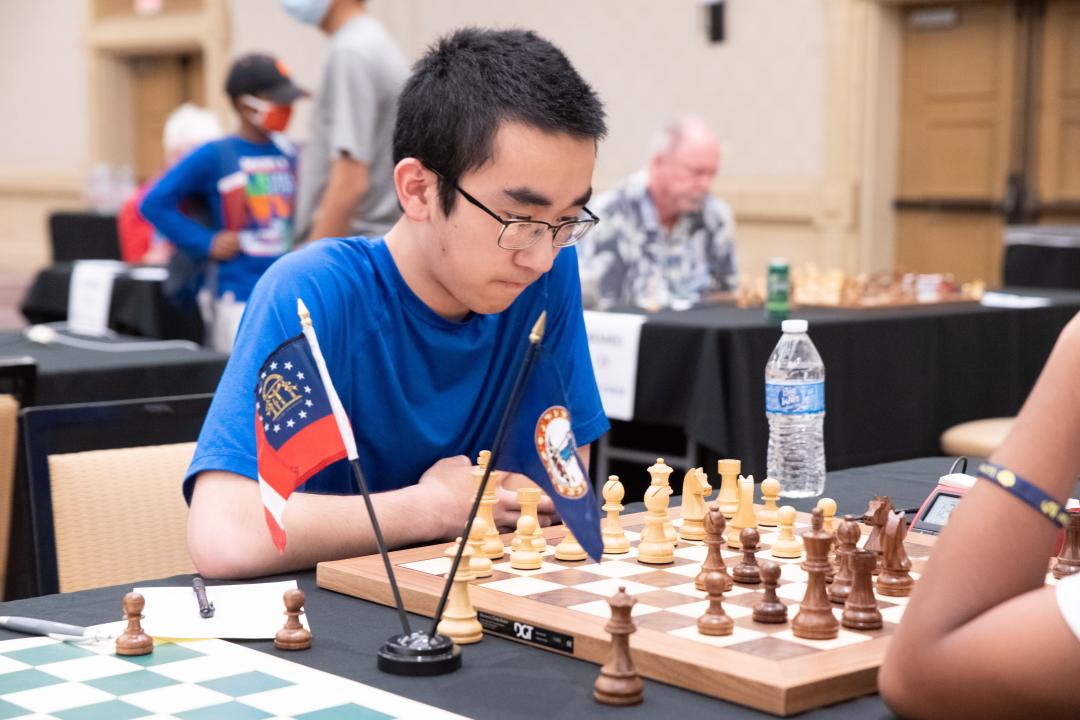 Three players in the Barber are vying for the top spot with 4½/5 headed into today’s game. After Kansas’s Vaseegaran Nandhakumar upset top seed FM Bach Ngo with black in the fourth round, Ngo sits a half point behind Nandhakumar, Pennsylvanian FM Erick Zhao, and New York’s Brewington Hardaway. Zhao will have to play against Ngo as Hardaway and Nandhakumar, who is the sole untitled player in the top four, will take board one.

For the Haring, first place will be decided on board one, as Yan attempts to go six-for-six against FM Zoey Tang. After beating WIM Ellen Wang in round five, Tang is the only player who is one game behind Yan. This will be another rematch of last month’s US Girls Junior invitational, where Tang won in a Queen’s Gambit with white against Yan. Colors are reversed today, as Yan attempts to finish her hat trick of rematches after knocking off WFM Gracy Prasanna and FM Alice Lee in back-to-back games yesterday.

The sole leaders of the Rockefeller, Georgia’s Andrew Jiang and southern California’s Benjamin Tang, will square off for first today. If they happen to draw, a group of five players a half-point back have a chance of joining a tie for first. This pack is led by New York’s Sam Luger, who nicked Jiang for a draw last night, while Tang won both of his games yesterday, including a barnburner against Arizona’s Roshan Sethuraman.

After a tumultuous day on the leaderboard for the Irwin, Texas’s IM Douglas Root now sits in sole first with 4½/5, and will play white against Oregon rep GM James Tarjan. Tarjan, who shares second with GM Enrico Sevillano at 4/5, gave up a draw to North Carolinian Mark Hoshor in the second round. Since then, he has crept back up the standings and, after a short draw last night, has a chance to cement the comeback today.

Sevillano entered the day in first place, but lost to New Jersey’s IM Leonid Sokolin. Sokolin then had a chance for first until losing to Root the following round. Sevillano plays Illinois’s Steven Szpisjak and, with a win and a Root loss or draw, has a chance to share first. 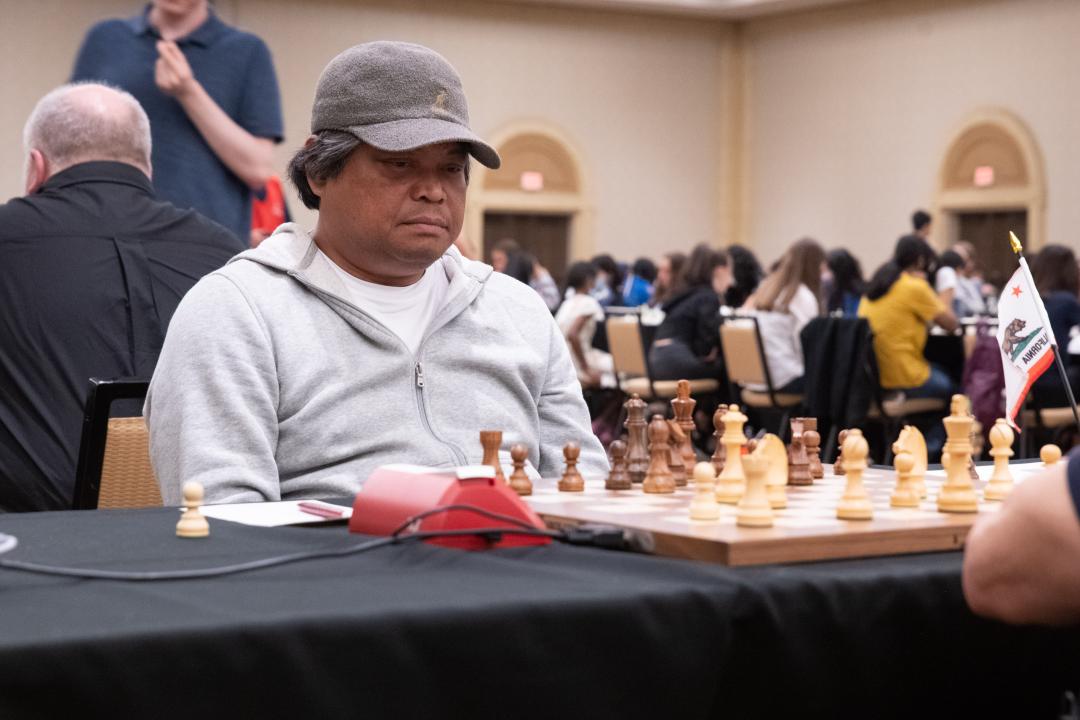 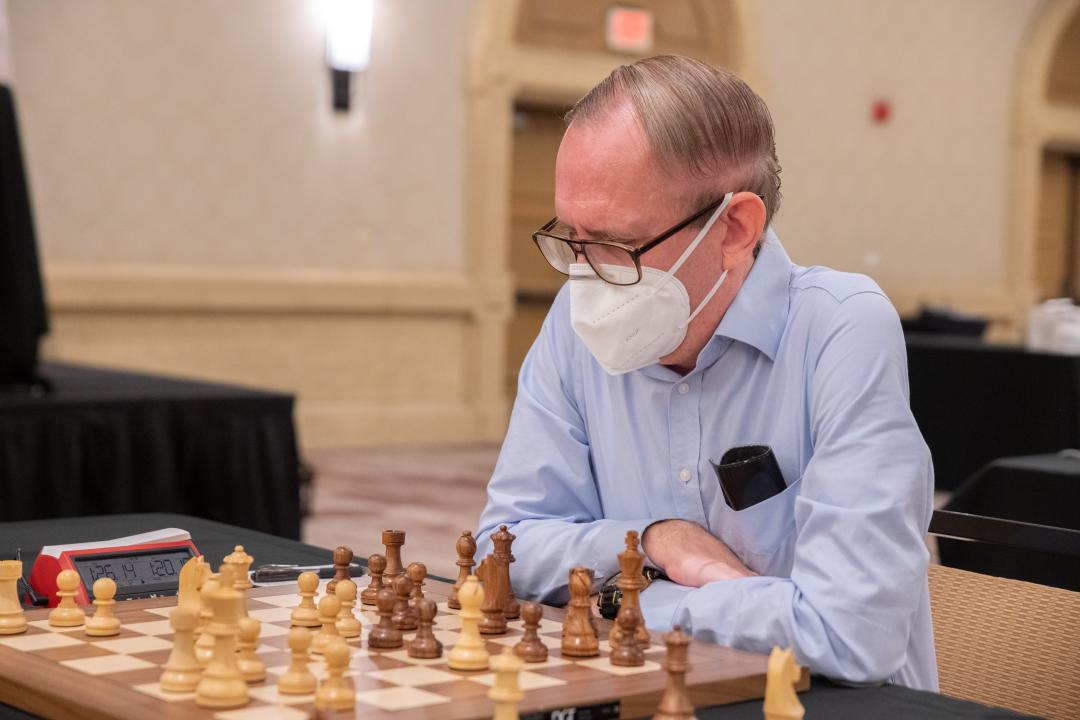 The traditional schedule trudged on for its third round last night, with GM Elshan Moradiabadi still leading the dwindling pack of players on a perfect score. He is now joined only by two National Masters (California’s Austin Mei and Indiana’s Jim Dean) and four Experts. Mei survived several scares against noted chess traveler and organizer Lawrence Cohen, who played an admirable game. 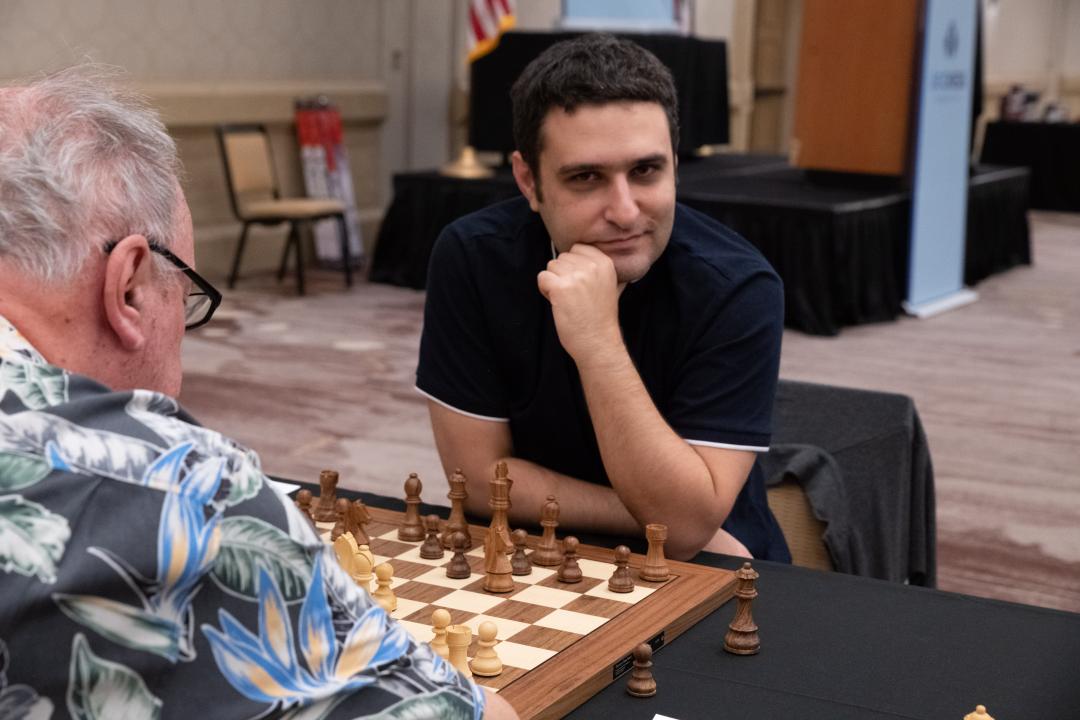 The six-day schedule of the Open kicks off tonight, as names like GMs Vladimir Akopian and Daniel Naroditsky enter the fray. Players in this schedule will play all nine games at the classical time control, but will "double up" the following two days before merging into the main pool.

Last but not least, the first of the near-daily quads were played on Monday, with no less than 12 groups doing battle. Congratulations to the winners!