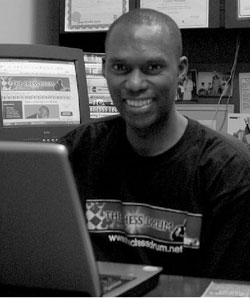 Daaim Shabazz. Photo: Adeleke Omitowoju
The #8 article in Best of US Chess 2016 is Joshua Colas: His Journey So Far by Daaim Shabazz. Judges praised the engaging and inspirational story, chronicling Joshua Colas' impressive development as a chessplayer. Ten years ago, Josh started a gradual ascent supported by his family and friends. He started chess in October 2005 playing in local tournaments in New York, but his father put him on the fast track. Guy has always had confidence in his son, but could he have known that he was grooming a master-level player? Guy told The Chess Drum, “I knew he had potential, but when he was solving 4 to 7 move puzzles within seconds, I knew there was something natural.” In time, Josh became an Expert at 10, a National Master at the age of 12, a Senior Master at 14, and a FIDE Master at 16. He has won six national grade championships and a number of open tournaments and is a mainstay at the Marshall Chess Club. One of his first confidence builders was the 2010 Caribbean Chess Carnival in Trinidad and Tobago, his first international event. As an 11-year old, he received international publicity, became the sensation of the tournament by beating national hero FM Ryan Harper. He scored +2 in the process and lost only to IM Kevin Denny of Barbados. Over the years, Josh has built up a fine collection of Grandmaster scalps along the way and has finally developed a bit of stability. He had been fluctuating between 2350-2420 since 2012, but has recently tipped the ratings scales at 2487 USCF after his first GM norm at the North American Open December 2015. Lately, Josh has been working on his opening repertoire, a necessity at higher levels. As a senior at White Plains High School, he aspires to secure the last two norms to secure the coveted Grandmaster title. To appreciate the journey, one has to look at the circumstances. Josh comes from a loving family of Haitian ancestry with hard-working parents Guy and Yanick, an older brother Korey, and a younger sister Chellsie. He also has a supportive uncle named Clotaire Colas, an early chess inspiration. They are his biggest fans and have supported him in his quest for chess excellence. After earning his GM norm, Josh stated, “My parents constantly remind me that if I work hard and believe in myself, nothing is impossible.” Daaim Shabazz is the editor and founder of the chessdrum.net. You can also find him on twitter and facebook.

"This inspiring article written by Daaim Shabazz is a great tribute to Joshua Colas and his family.  I especially appreciate the biographical style of the article covering Josha’s upbringing, his family life, school life and his future plans to attend Webster on a scholarship.  Knowing what kind of talent Webster churns out, it looks like Josh’s journey has just begun!"

"I certainly connected with this piece on a personal level. Josh and I followed similar paths over the course of our childhoods by taking advantage of the countless opportunities in American scholastic chess. We now both study at Webster University and competed for our C-team at Panams. Daaim does a great job of documenting Josh’s journey and highlighting the triumphs and obstacles along the way. The words “​Keep him interested” is some of the best advice for the parents of a young chess player. Josh has undoubtedly kept interest!"

"Josh Colas’ rise in U.S. chess is well chronicled by Shabazz who writes engagingly about our nation’s young talents, national and international chess.  Josh annotated his masterful victory over GM Jinshi Bai for this article. His annotations are clear, precise and demonstrate awesome technique in what was a difficult endgame to win. 'Young Josh will be looking to make history of his own,' writes Shabazz. We agree wholeheartedly!"

"This interesting story describes the journey of young Joshua Colas from a sharp 7 year old playing his father to an experienced master battling a Chinese Grandmaster with the IM title at stake.  These are true words of wisdom from the talented rising star himself. 'After earning his GM norm, Josh stated, "My parents constantly remind me that if I work hard and believe in myself, nothing is impossible."'"

#8 - Joshua Colas: His Journey So Far by Daaim Shabazz