The tenth round of the 2022 U.S. Championships saw several of the leaders dangle precipitously on the edge of disaster. Still, in the end, only three players were able to add full points to their scorecards: GM Hans Niemann in the Open Championship, and WGM Gulrukhbegim Tokhirjonova and FM Thalia Cervantes in the Women’s Championship. 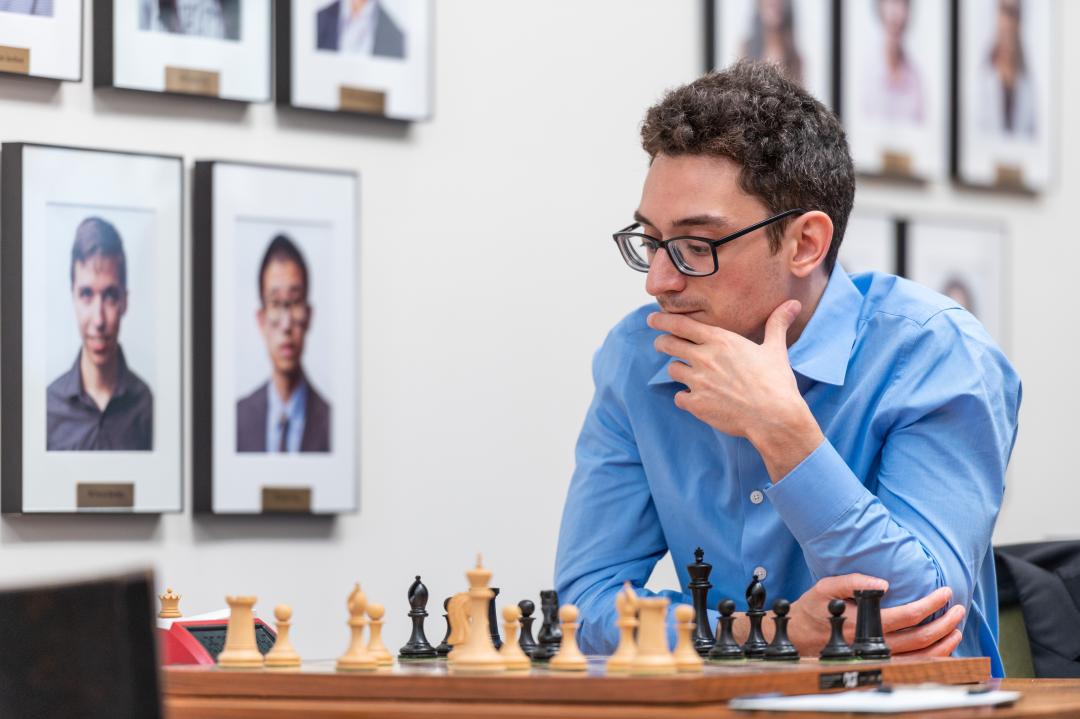 GM Fabiano Caruana has been on the better side of several of his draws, narrowly missing out on a few wins, including his round nine game against GM Awonder Liang on Friday. But facing the current U.S. Junior Champion, GM Christopher Yoo, it was his turn to defend a challenging position that could easily have turned out unfavorably for him. 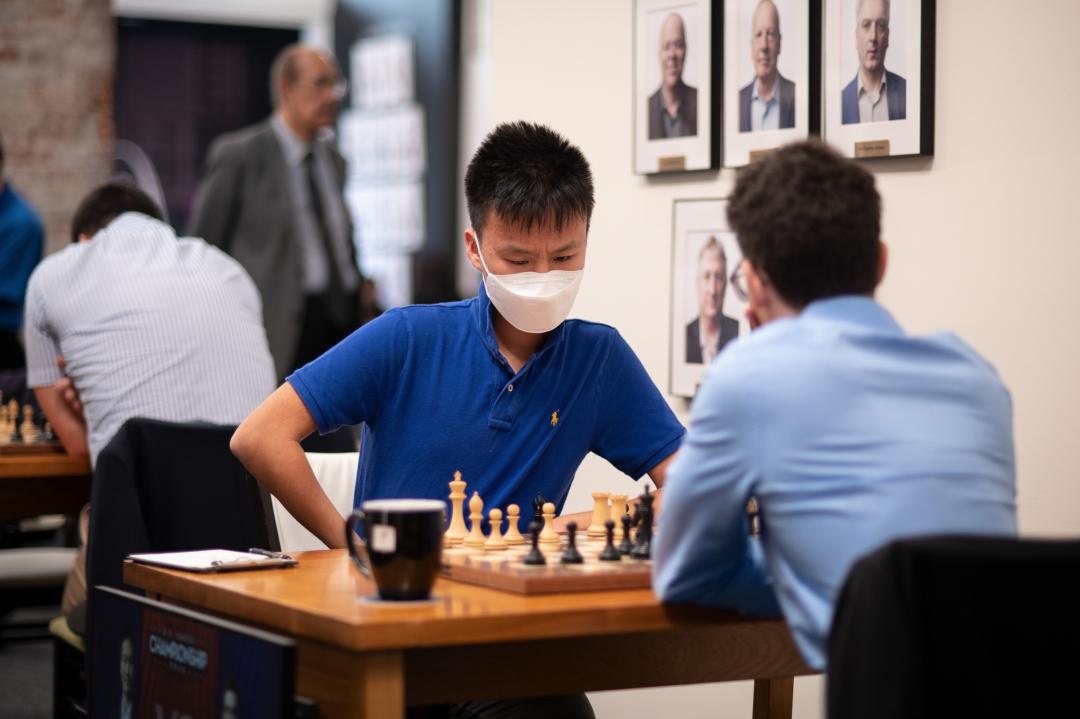 As Black, Caruana chose an ambitious line against Yoo’s English Opening. Instead he ended up in a depressing position which, despite having been played in dozens of grandmaster games, has yet to produce a win for Black. Yoo ensured that today would not be the day for that either.

White chose the safe option on several occasions rather than making a real push for the win.

Some people, notably FIDE’s new CEO, GM Emil Sutovsky, apparently took issue with the game continuing until stalemate, but to this reporter, it’s clear that the players simply adhered to the tournament’s no draw policy.

GM Elshan Moradiabadi has had one of those tournaments where just about nothing works out. He lost the ultra-miniature against GM Leinier Dominguez, and his round ten game just adds water to his bucket of misery.

Essaying the Smyslov variation against GM Hans Niemann’s King’s Indian, Moradiabadi initially played a little too tentatively and ended up in trouble. However, a few loose moves from a fast-playing Niemann let Moradiabadi take control of the game with an excellent Exchange sacrifice. 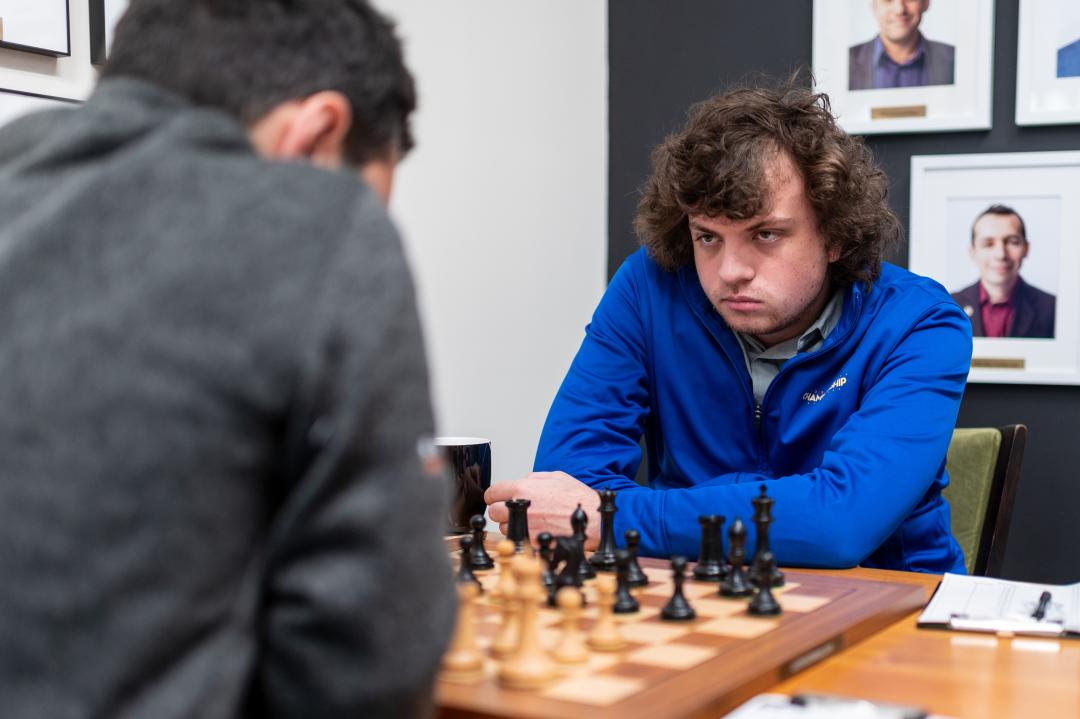 And then... well, as GM Yasser Seirawan said in the official broadcast, “Chess is a cruel game — those who don’t understand that are not chess players!”

After a lengthy think, and in a spot of time trouble, Moradiabadi chose to collect the b7-pawn, which was a dreadful mistake. In just four moves White went from having a large advantage to having to resign.

Of the other games, only the matchup between GM Jeffrey Xiong and GM Sam Shankland seemed to seriously push the boundaries of imbalance, with the advantage changing hands several times along the way before the draw was agreed.

This leaves Caruana in the lead by a half-point with three rounds to play. In Monday's 11th round, he takes White against Xiong, while second place GM Ray Robson will look to take down GM Awonder Liang and perhaps take first place for himself.

Turning to the Women’s Championship, WGM Jennifer Yu took the lead in the tournament in round nine, and in Saturday’s tenth round, she looked to extend her lead against former champion IM Nazi Paikidze.

After poor opening play by Yu, Paikidze obtained an almost decisive advantage, but soon she let Yu was let off the hook. The result was an absolutely nerve-wracking game, where the advantage changed sides for what felt like more times than your reporter has fingers on his hands. The eventual draw by perpetual check seemed a fitting result for such a battle. 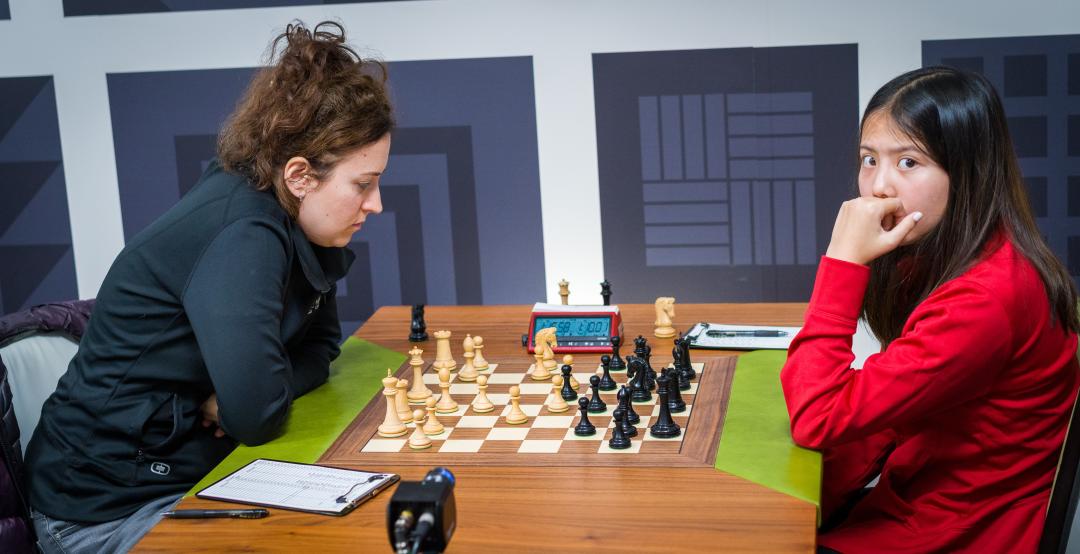 After that, Krush was struggling to stay in the game and was undoubtedly relieved when Wu, still with the advantage, offered a repetition of moves and allowed the draw.

In the game between FM Ashritha Eswaran and FM Gulrikhbegim Tokhirjonova, Black seemed to have a slight but comfortable edge for many moves. Thanks to careful defensive play by Eswaran, the balance never truly tipped in Black’s favor until move 46, when “Begim” played the devastatingly strong 46. ... Ne5!, effectively deciding the game, although the players went on for another 20 moves. 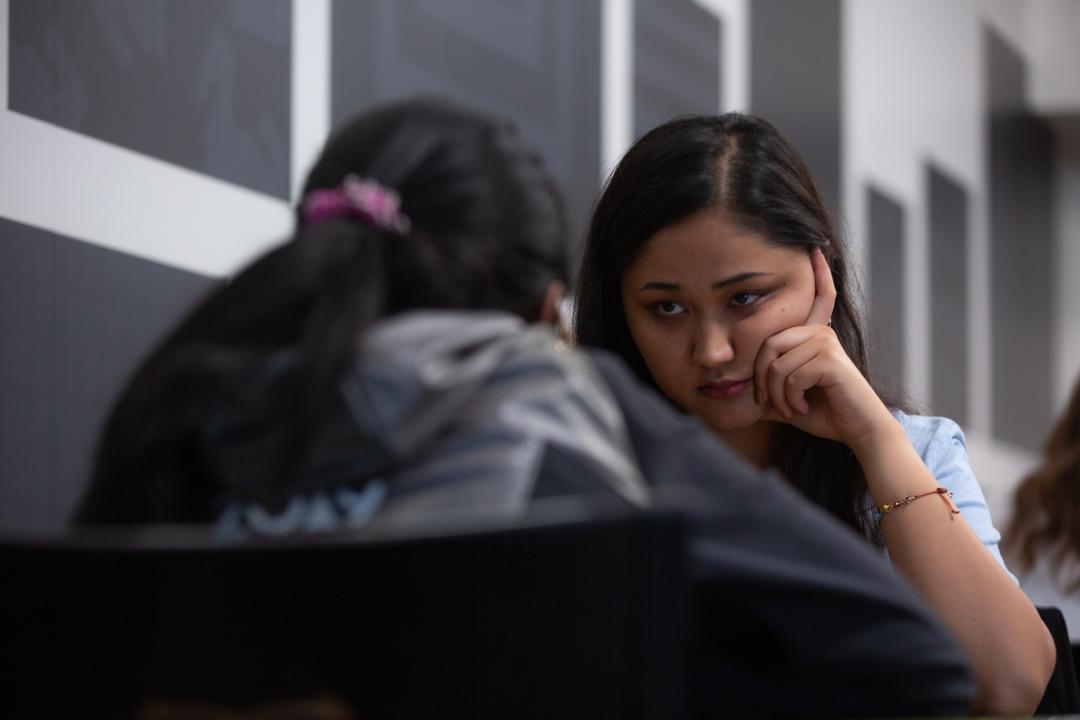 With her victories in her last two games, and despite being a full point behind the leader with three games to go, Tokhirjonova has put herself in a good position to make a timely charge toward the top of the crosstable.

The same can be said about WGM Thalia Cervantes Landeiro, who was paired with one of the revelations of this tournament, WIM Megan Lee. 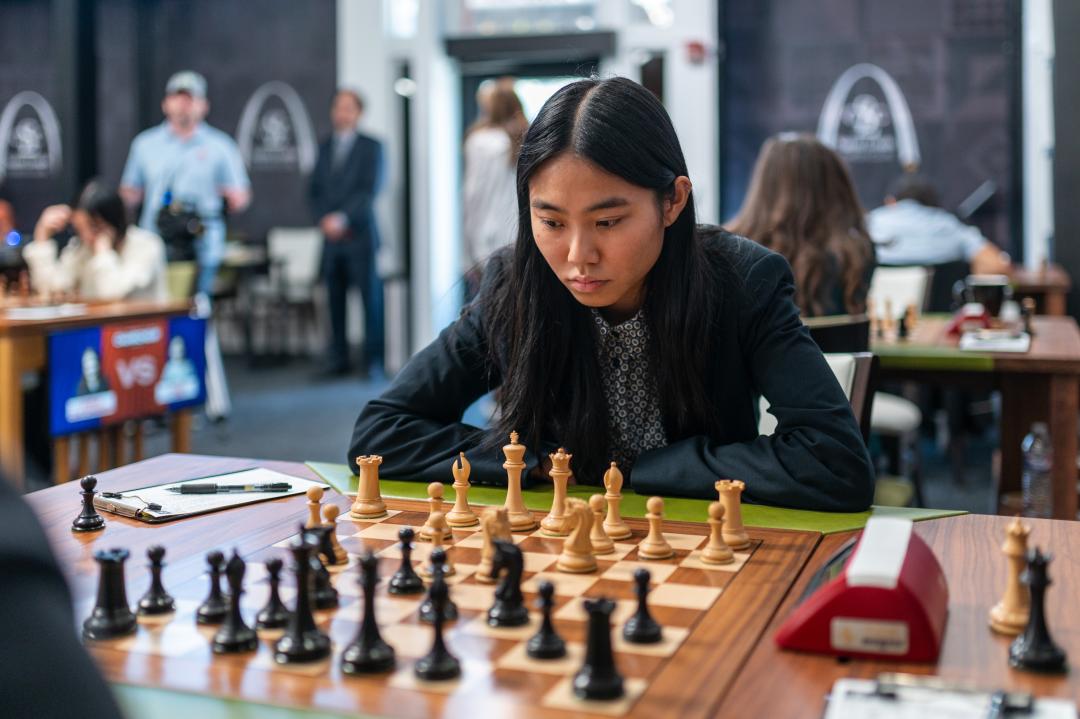 After having equalized in the opening, Cervantes Landeiro took over the initiative, winning a pawn and eventually the game. An impressive performance by Cervantes Landeiro, who is now also staking her claim to the championship trophy.

Despite a willingness to fight in all cases, the remaining Women’s games were drawn. 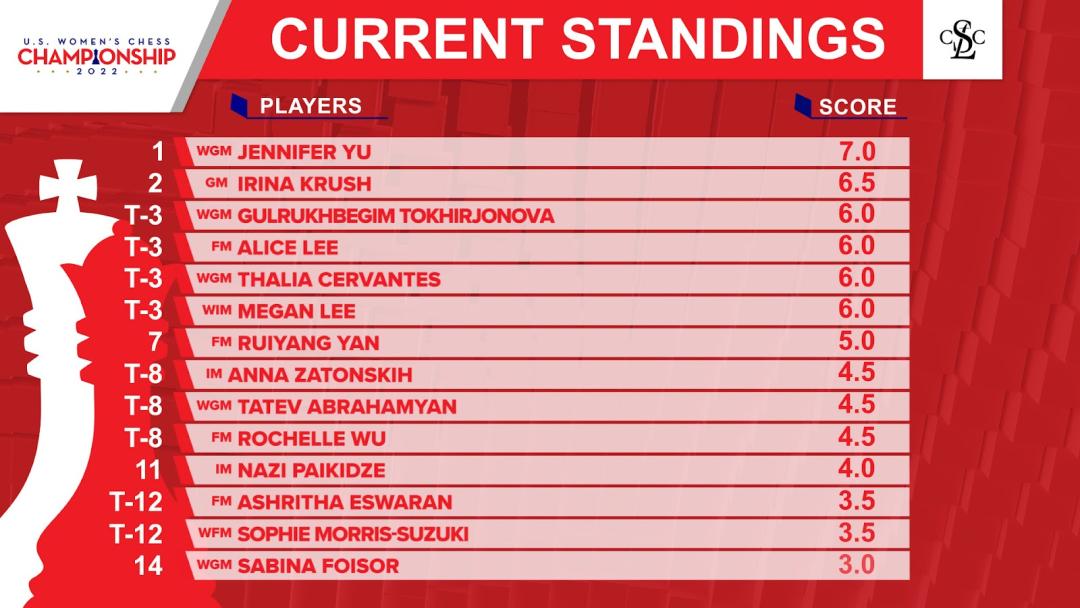 It's still anyone's tournament to win in the Women's Championship, with just one point separating first place (Yu) and third through sixth. Round eleven sees the key match up between Tokhirjonova (with White) against Yu, while Krush takes Black against Paikidze. FM Alice Lee has White against Abrahamyan, while Lee plays Black against FM Ruiyang Yan, and Cervantes Landeiro will move first against Eswaran.