When most people think of the World Open they naturally think of the main event – the 9 round Swiss that ends July 4th weekend.  However, the World Open is more like a festival and actually includes fifteen separate events over 12 days and features events with prize funds from $500 to the $225,000 main tournament. This past weekend the events kicked off with the World Open Senior and the World Open Women’s Championships.  Both events are weekend 5 round swiss events. 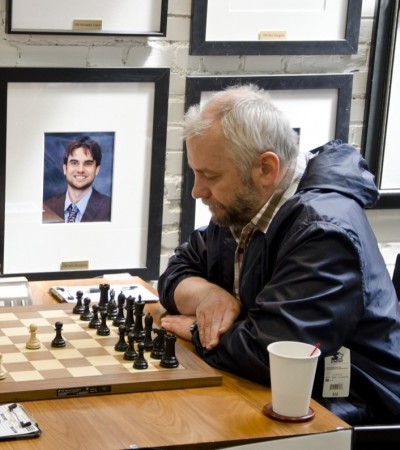 GM Alexander Ivanov. Photo: St. Louis Chess Club
The Senior was held in two sections featuring a $5000 guaranteed prize fund.  That was enough money to draw two GMs:  Alexander Ivanov and Sergey Kudrin among the tournament’s 39 participants.  Since there were no other masters in the field, it is not surprising that the two GMs tied for first a full point ahead of the field.  The GMs played a polite draw in round three and each defeated their other four opponents.  Each won $800 and Ivanov won the $100 bonus for the better tiebreaks.  In the last round, Ivanov defeated the tournament’s third seed Marty Frank. Kudrin defeated Andy Rea in round two. Rea finished with an even score, but he had this nice ending.  White is up an exchange, but black has some threats with the passed e pawn.  Can black push his passed pawn through or can white defend and/or win?  How should play proceed?

Show Solution Class A player Richard Pugh started the tournament seeded 13th of 22 players in the Open section, but finished in clear 3rd behind the two GMs.  He scored 50% against the three experts he played and won both games against the players in his own rating class.  In the U1810 section, Antonio Pena scored 4 ½ to take clear first and $600.

The Women’s Championship was not as well attended as the Senior.  Despite trying many different formats, the tournament can’t quite seem to attract a significant following.  This year’s event drew 18 players in two sections.  The top section had only six players, but there were 5 guaranteed prizes!  The winner of the event was never in doubt.  WFM Ramya Inapuri out-rated the second seed by nearly 300 points.  She cruised to a 5-0 score and clinched clear first with a round to spare.  In the last round, she was 4-0 and played the tournament’s lowest rated player who only had half a point because she had already beaten everybody else.  In this game, Inapuri dominates the tournament’s second highest rated player. The U2300 tournament was essentially a weekend swiss.  Twenty players (plus two house players) played in the event.  Surprisingly, there was not a single master and only one expert.  When the expert withdrew after only two rounds (when he was 2-0), the field was wide open. In the last round, any of ten different players on the top 5 boards had at least a mathematical opportunity to tie for first!  Four of those boards ended in draws,  boards one and two both went to king and pawn endings. On board one, Madhavan Narkereen only needed a draw to tie for first.  His opponent, Sharvil Trifale trailed by a point, but could tie for first with a win. Narkereen got the draw he needed, but it could have ended much worse for him.  Trifale had a winning rook ending, but transitioned into a drawn pawn ending.

Show Solution On board 2, both players tried to win, but the result transitioned to a pawn ending with no breaks for either side. Board four continued the theme of all games going to pawn endings, but this result was very surprising.   In the following position, white accepted black’s draw offer.  The material is equal, but white has two separate ways to win!

Show Solution The side events were directed for CCA by Bob Messenger assisted by David Hater and Harold Scott. In addition to the side events that are concluded, the Philadelphia International is also ongoing.  It will end on June 28th and many of the players will then play in the World Open.  Top seeded GM Yuniesky Quesada Perez has the only 4-0 score.  He leads a 78 player field that includes 10 GMs and 11 IMs from 14 different countries.  You can follow the tournament including live games at www.internationalchess.net.  Here is Perez’ fourth round victory over GM Ruifeng Li. You can still enter many of the events at the World Open including the main tournament.  See www.chesstour.com for the complete schedule. Look for more coverage of the Philadelphia International and other events later this week. For more information, visit:
SHARE:

William Goichberg. For one half century the revolving planet, THE GREATEST CHESS TOURNAMENT DIRECTOR OF ALL TIME. Period.INCOMPARABLE. Here comes the fourth of July and gee whiz by golly quite by accident here comes that man Mr. Goichberg. STAGGERING. For unanimous ruthless selection to the Chess Hall of Fame. For honor, for fairness, FOR DECENCY. No qualification , no doubts, no surrender. Do you wish to let this man die without a quiet thank you or do you wish to dismiss this towering giant who stands alone in American chess history.STAND UP PEOPLE,DELIVER WITH GUTS. Let hatreds, foibles, jealousy, or mickey mouse clubs, the bygones be gone. GOICHBERG FOR THE CHESS HALL OF FAME. Jude Acers/New Orleans
I wonder if you get better attendance for the Women's tournament if you make it 1-day Rapid event (say 5 rounds Game 30 d5) and schedule it 1 day before the main event and next day after conclusion of WO Championship Under 13 year olds. Prizes are definitely very reasonable already and you may get good girls that just played in Under 13 year old championship for your lower section of the tournament as well stronger women players coming for the main event and would not mind to try to win some $$$ the day before. IMHO, several day spread between events make it difficult for players and their parents (if scholastic) to book additional time off from work and also from expenses prospective.
The 3rd Place in the senior open was Lawrence Pugh not Richard Pugh.