American GM Wesley So finished tied for first place along with World Champion GM Magnus Carlsen in the Saint Louis Rapid and Blitz tournament, which wrapped up last weekend. The five-day event, hosted online by the Saint Louis Chess Club, featured a $250,000 prize fund and ten of the world’s top players battling through several round robins of both Rapid and Blitz chess. The event was salvaged as a traditional highlight of the Grand Chess Tour, otherwise canceled this year because of COVID-19.

“I’ve had a lot of experience in these events from the Grand Chess Tour, and I tend to lose one game after another,” So said in his post-tournament interview. “If I lose one game, it can snowball to a second or third loss, so I was trying to avoid that at all costs. It is often hard to compete against Magnus for first place, and generally in these blitz games, a lot of things can happen very quickly. So I’m grateful for today’s win.” 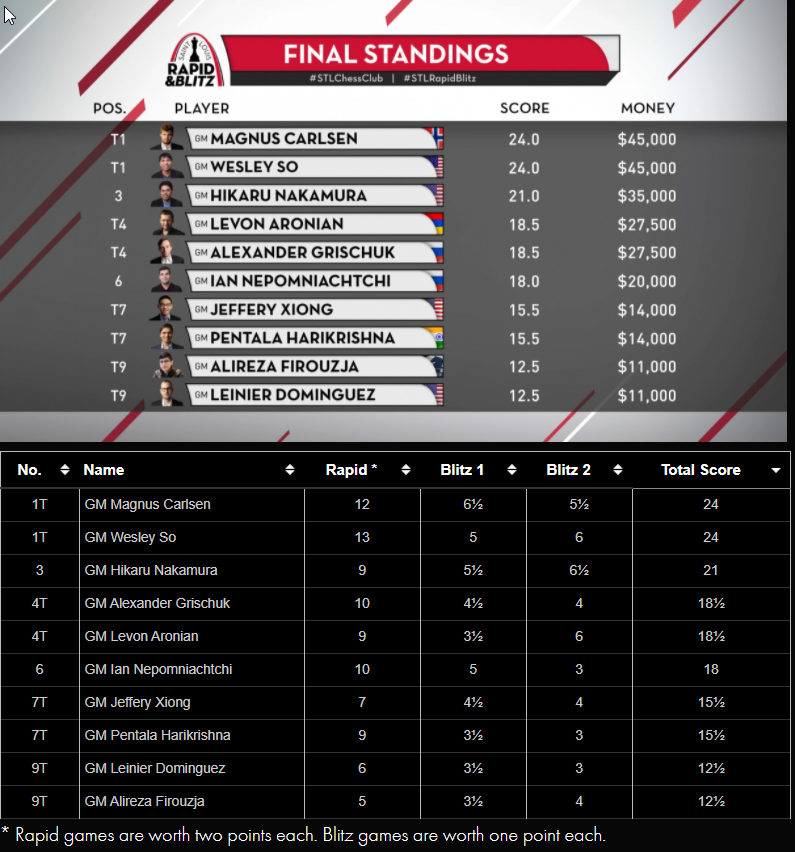 So had led the tournament standings after going undefeated through the Rapid portion of the event: Nine G/25+5 games played over the first three days, with each victory worth double in the overall standings. But the world champion put on a show during the first round of Blitz games on Friday, regaining a half-point lead over So in the standings while the two ran away with the tournament. Carlsen and So held a three-point margin over the rest of the field entering the final day of blitz.

On Saturday, So was forced into late aggressive action after otherwise turning in a relatively calm tournament. Where the American’s play throughout had been critiqued as extraordinarily safe – several times was he criticized for offering friendly draws in otherwise playable positions, though he did only lose twice across 27 total games -- his second loss of the event came against Carlsen in the third round of Saturday’s Blitz.

Carlsen enjoyed a full-point lead with only three games remaining when So’s aggression finally came to life. The American closed out the event with three consecutive victories -- twice with the black pieces -- over Russian GM Ian Nepomniachtchi, Armenian GM Levon Aronian and Indian GM Pentala Harikrishna. The late streak caught him up with Carlsen, who finished the day 2/3.

“Obviously, I am happy to win anything that I play,” Carlsen said. “I thought the overall rapid portion was successful with many good moments, and I congratulate Wesley So on a fantastic tournament. He played solidly throughout, especially with his three consecutive wins. It was an overall amazing performance that you can only tip your hat to.”

There were no tiebreaks intended for the event, and Carlsen and So’s efforts earned them each $45,000 in a split of the top prizes. American GM Hikaru Nakamura, despite a rough cycle through the rapid games that left him in the middle of the pack, dazzled during the blitz portion to finish in clear third. Nakamura collected $35,000.

The overall tournament displayed several moments of respect and sportsmanship -- even levity, as shown in Nakamura’s final game against fellow American GM Jeffrey Xiong. With the white pieces, Nakamura pulled out the famed “Bongcloud Attack,” known as a joke opening that goes against many chess principles, beginning with 2. Ke2! as Nakamura played on Saturday. All jokes aside, the offbeat opening earned a victory in 52 moves and generated discussion from Carlsen in his post-game interview. The world champion said he was under the impression the “Bongcloud” began with 1. f3 followed by 2. Kf2, and went on to show a defensive line he had prepared for Nakamura. Analysis was a bit hazy.