So Undefeated in Saint Louis, Heads for Blitz

After three days of play, American GM Wesley So has leapfrogged World Champion GM Magnus Carlsen and now sits alone atop the diamond-studded field of the 2020 Saint Louis Rapid and Blitz.

On Thursday afternoon, So added victories over both Armenian GM Levon Aronian and Indian GM Pentala Harikrishna, rendering him the sole undefeated player through the Rapid portion of the online event -- an important round-robin format where each game counted double in the overall standings. The tournament now shifts to its Blitz portion (G/5+3), featuring 18 games for each super-GM in a double-round robin format, where each game will count for the traditional one point for each victory and half-point per draw. Nine games are set to be played each Friday and Saturday beginning at 1:00 p.m. Central.

While So’s solid play and dazzling endgame technique weren’t surprising to most, the sudden stumble of Carlsen late on Thursday afternoon drew more than a few eyeballs. After suffering an unfortunate loss-by-disconnect in the second round on Tuesday, Carlsen had been on an absolute tear, winning all three of his games on Wednesday and adding a fourth consecutive victory over GM Alireza Firouzja in Thursday’s opening round. The streak had brought Carlsen to a full game lead over So and the rest of the field entering the eighth round.

But it was So’s fellow statesman GM Jeffrey Xiong who knocked the Norway champion from his swagger. In that eighth round, Xiong came hard with a Winawer in the French Defense and was even winning in a fast-flying endgame before allowing Carlsen a swindling escape for the draw. The World Champion would go on to lose his ninth-round match against Russian GM Alexander Grischuk, allowing So to pass Carlsen in the standings. 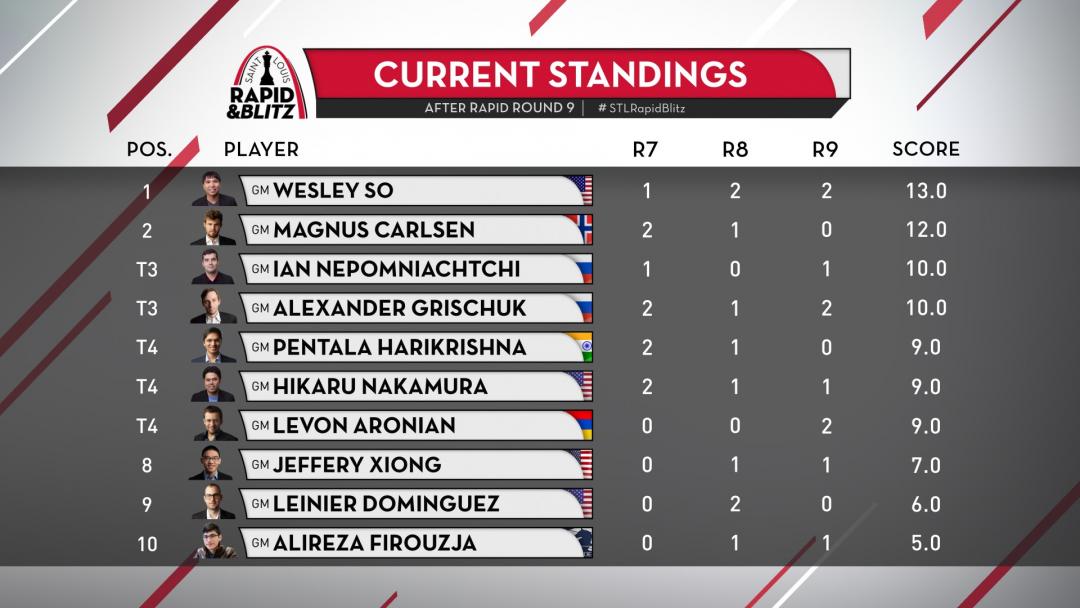 In the Winawer, Xiong went right to work on Carlsen’s queenside, first snatching up the a-pawn with 10. … Bxa4 and then grabbing the doubled c-pawn with a cute 13. … Bxc2! for an early advantage. The early pawn grabs provided Xiong with a monster-looking passed a-pawn, which ironically did not move until the 45th move of the game.

First, several other passed pawns would highlight the game. Xiong’s c-pawn sprinted to 24. … c2 before Carlsen was able to adequately corral it, though the effort ultimately led to queens trading off the board and equalization heading toward endgame. The exchange created Xiong another passer, though 33. … e3 is as far as it would go before stalling, as the American’s attention was forced to Carlsen’s downhill running d-pawn.

When Xiong’s a-pawn finally began its march, he had just 17 seconds left on his clock -- and Carlsen himself played 46. Ne5 with just one second remaining -- bringing an endgame in true bullet style. The World Champ entered with the advantage, though missed a game-clinching 48. Re8 to instead force an exchange of the knights.

For a moment, the pendulum swung toward black as Xiong’s a-pawn looked like it would do the deciding -- though it was just a moment. A misstep by his rook left Xiong shaking his head, intending to cut off the white king but instead missing a pawn grab that would have provided a decisive escape square for his own monarch. Instead, Xiong was forced into perpetual check and Carlsen escaped with a draw.

For his part in Saint Louis, So has delivered solid play highlighted by endgame conversion, but perhaps none so more than a gorgeous display of technique in his ninth-round game against Harikrishna. With the black pieces, So had already achieved equalization against the Ruy Lopez and then took the advantage after Harikrishna’s weakening 23. F4. That pawn soon fell and ultimately forced a queen trade for white to relieve pressure, ushering a knight-and-pawn endgame that So played with near-perfection. The American GM masterfully handled two white passers with his king and knight, calmly displaying calculation that would have impressed in classical time controls, let alone rapid.

After dismantling both of white’s queening threats, So dangled an outside passer as a mere distraction, several times laying trap squares that would have decisively traded the knights. While Harikrishna did not take any of the bait, So’s pressure was insurmountable, and the show-off knight sac at 66. … Nxf3 put an exclamation point on the win.

“I’m starting to play some quality chess so far, obviously the rapid portion means a lot more because it counts as two,” So said to commentator GM Maurice Ashley after Thursday’s games. “It’s always hard to win tournaments when Magnus is around. There are still a lot more games – 18 games – and anything can happen in blitz. As many players have pointed out, I’m not by any means the best blitz player.”

So is currently the world’s No. 4 blitz player.

The speedy portion of the Saint Louis Rapid and Blitz begins both Friday and Saturday at 1:00 p.m. Viewers can watch the games along with expert commentary by Ashley, along with GM Yasser Seirawan and WGM Jennifer Shahade on uschesschamps.com or on the Saint Louis Chess Club’s YouTube and TwitchTV channels.