Round Robin Awarding Seat in 2021 US Championship Begins Friday 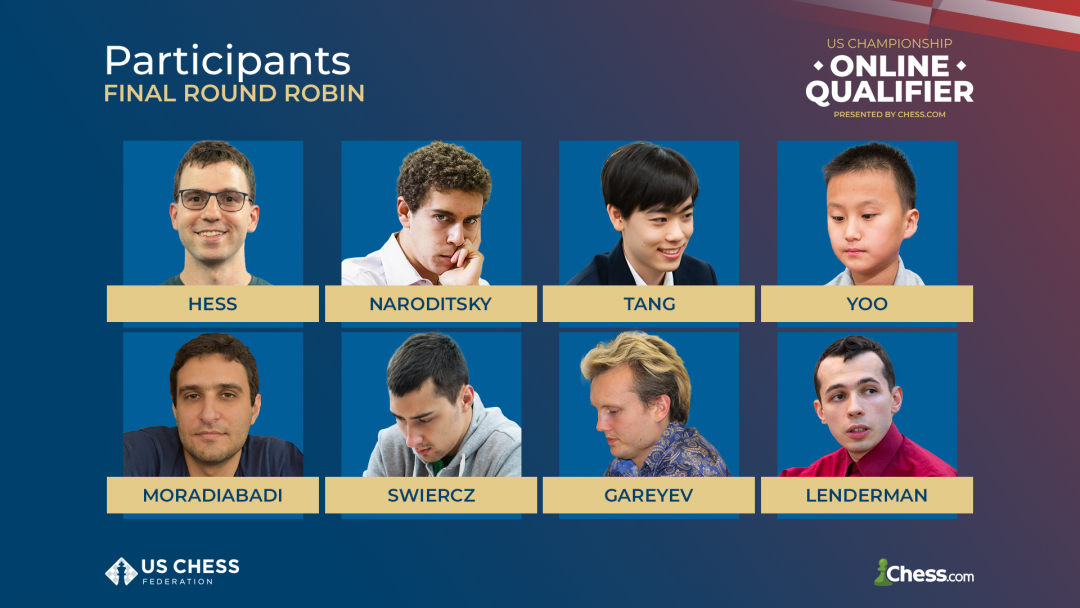 Beginning Friday, eight top American players will compete through a round-robin tournament with the winner earning a seat in the 2021 US Chess Championship.

US Chess has offered a new path to next year’s national championship by holding a phased online qualification event, which has advanced from one rating class to the next over the past three weeks. In partnership with Chess.com, the nationwide online qualifier has run through a series of Swiss events and whittled down to a final two players – GM Andrew Tang and IM Christopher Yoo – who now join six preselected participants for a final round robin event.

With play beginning on December 11, the Final Round Robin will play one 90+30 time control game per day through December 18, with each game starting at 2:00 p.m. Pacific time. The tournament will have a rest day on Tuesday, Dec. 15, and a tiebreaker using US Championship rules will be held Dec. 19, if necessary. The eight players will compete for a share of a $10,000 prize fund, with the winner earning $3,000 and a spot in the 2021 US Chess Championship. The Final Round Robin will be broadcast in full on Chess.com, as well as its Twitch and YouTube channels. 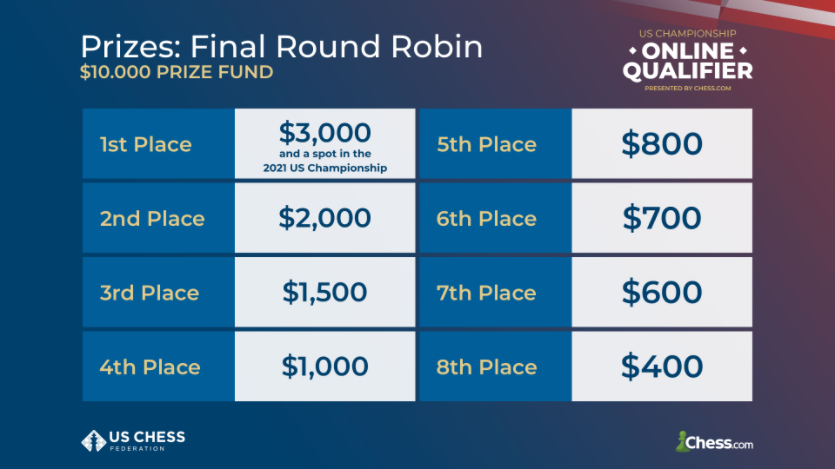 US Chess fans can also get in on the final tournament action with five blitz side events on Chess.com, each with a dedicated prize fund of $500, as well as a chance to win a paid trip to the 2021 U.S. Open – the “normal” qualifying path to the national championship, in any “normal” year. All side events are free seven-round 5+0 Swiss tournaments, open to members of the US Chess Members Only club on Chess.com.

The side events schedule will run as follows, with direct links:

Additionally, one random participant from any of the US Championship Online Qualifier events or any official side event will win a flight, hotel and entry into next year’s U.S. Open event, scheduled for July 31, 2021 in New Jersey. To be eligible for this prize, the selected player must be both an active US Chess and Chess.com member, as well as have passed a fair play background check on Chess.com. 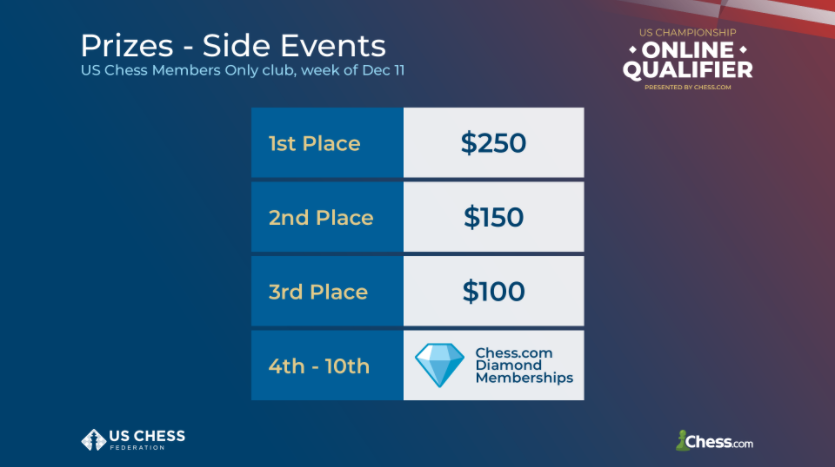 More information on the U.S. Championship Online Qualifier and its side events may be found here.

Just wondering why Varuzhan Akobian wouldn't get an invite unless he declined. He's played in 16 of last 17 US Championships.

I hope US Chess keeps this…

I hope US Chess keeps this event as a permanent addition to the Championship. It creates additional interest and another high-level tournament in the US.

Very excited to see young IM Yoo compete for a shot in the 2021 championship! This will be the toughest test of his chess career, but I know he will be giving these career veterans a big run for their money... wishing him fantastic moves and all the luck in the world!

If I don't have time to…

If I don't have time to watch the coverage, but want to see the results thus far, is there a site available?
Thank you!