Lucky and Good: Lenderman and Yip Score at Eastern Open 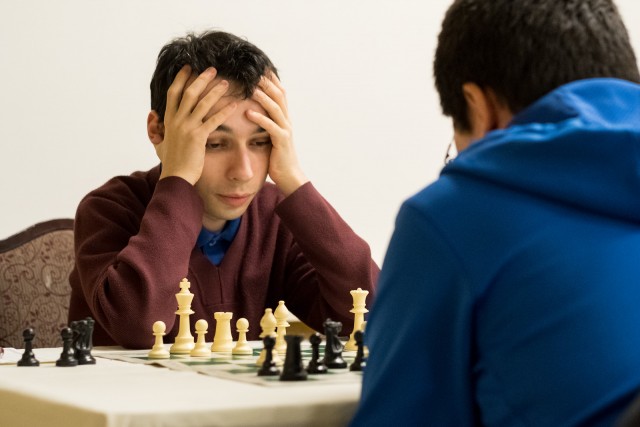 Aleksandr Lenderman, Eastern Open Champion, Photo courtesy Bill Simmons
Bethesda, Maryland — When Nikki Khmelnitsky and Prani Gunasekaren first started playing at the Tri-Bridges Chess Club back in 2013, neither girl had an official rating. So it ended up being a sweet reunion this past week when they met up here at the 43rd annual Eastern Open and both girls scored five out of six points — despite squaring off against each other in Round 4 — to share first place in the Under 1300 section. Although Nikki, 11, who is the daughter of chess author IM Igor Khmelnitsky, was pleased with her result, she didn’t let the victory go to her head. “I’m neutral,” Nikki said of her feelings about winning her section of the tournament. “I’m happy but I’m neutral.” Prani, 12, said initially she didn’t think she could win her section but after an online prep session with her coach — Saket Kumar, of India — she found her rhythm on the board. “I used to go fast and sometimes when I go very fast in games, I lose,” Prani said. “So my coach said, ‘Take your time, think three to four moves ahead,’ because it’s really important to see all the strategies that you have.” Both girls won $290 apiece. But the high fives they were able to give each other after they found out they both won first place were priceless. Joshua Anderson, founder of the Tri-Bridges Chess Club, located just outside of Philadelphia, said he was pleased to hear the good news about his former club members — whom he described as the “first wave” of kids to hail from the club  — but declined to take any credit for the girls’ success. “I think we probably benefited more from them, but I certainly hope they were able to gain some experience playing other kids of similar level,” Anderson said. The girls’ joint first-place victory was just one of several uplifting stories that unfolded at the Eastern, one of the East Coast’s longstanding premier holiday season tournaments. For instance, brothers Trung and Tan Nguyen, 14 and 13, of Virginia, captured 1st and 2nd place in the Blitz tournament. “It was too easy,” FM Trung said of the blitz victory. GM Aleksandr Lenderman — one of four well-known GMs who competed in the event — won clear first place in the open section for the third time and said he considers the Eastern his “lucky tournament.” “I don’t win clear first very often but somehow this is just my lucky tournament,” said Lenderman, who won clear first place at the Eastern back in 2009 and 2010. Lenderman — who scored 6.5 out of 7 points in the Open Section to take home $2,000 — said he enjoys playing in the Eastern because he has several good friends in the area, including tournament organizer Tom Beckman and GM Larry Kaufman, who competed in the tournament, and one of his students, Carla Naylor. The two have undoubtedly had some good chess fortune over the years. For instance, Lenderman and Naylor won first place and $3,000 in the Mixed Doubles division of the World Open back in 2015. Lenderman said one of his more instructive games was his final round game against IM Tegshsuren Enkhbat. “I had a good knight against a bad bishop,” Lenderman said, explaining that Enkhbat’s bishop was cramped and unable to attack the pawns that remained on opposite colors of the bishop, whereas Lenderman’s knight was more mobile. When asked if he had purposefully sought a good knight vs. bad bishop endgame, Lenderman said: “He kind of forced it. Maybe he shouldn’t have. I basically allowed it because I thought it was favorable for me.” He also said the game bears some resemblance to Game of 11 of the 1963/64 US Championships in which Bobby Fischer beat Anthony Saidy. “It has similar tendencies,” Lenderman said of the game. Here is Lenderman’s game against Enkbat: For comparison, here is Fischer’s game against Saidy, known as  "The 11th Hour." GM Alexander Shabalov took second place and won $1,000 after scoring six points. 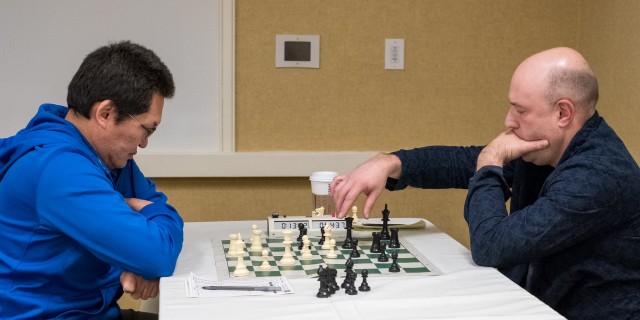 Enkhbat v Shabalov, Photo courtesy Bill Simmons
WFM Carissa Yip, 13, of Massachusetts, scored an upset with Black against GM Sergey Erenburg. “I think it was just luck,” said Yip, who broke the world record for the youngest female to defeat a grandmaster in rated play back in 2014 at the age of 10. “He just made a mistake and I definitely capitalized on it,” she said of 24. g5 in the following game: Yip — who scored 4.5 out of 7 points in the open section of the Eastern — said she wanted spend the week playing in the North American Open in Las Vegas but opted for the Eastern because of the cost cross country airfare. Her father drove 12 hours so that she could play in the Eastern. As for Nikki and Prani — the two young girls who won the Under 1300 Section — both were also accompanied by very supportive fathers. In the case of Nikki, her father was on hand to promote and sign copies of his “Chess Exam” series of books. 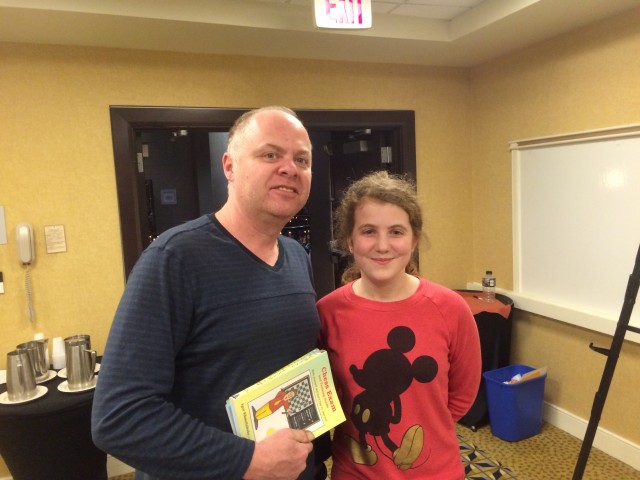 IM Igor Khmelnitsky with his daughter Nikki
“I used to be a professional player,” explained IM Igor Khmelnitsky, who works as a health insurance company actuary. “Now, I’m a professional father. And I’m a driver, too,” he joked in reference to driving his daughter from the Philadelphia area to the Greater Washington, DC area to play in the Eastern. In the case of Prani, her father, Guna Kuppusamy is a software architect with a specific reason for supporting his daughter in chess. “I want her to be a champion in chess so that we can show this achievement and get some scholarships when she goes to college,” Kuppusamy said. He said chess helps build math and analytical skills. “That’s why I want her to concentrate on a mind game.” Find full standings and results from the Eastern Open here.
SHARE:

Nice.
As always, a well run and classy tournament. I was especially impressed with the organizer beating a grandmaster in the last round. However, when a GM loses mid way through the tournament, perhaps sticking it out through the full schedule would be better for spectators than dropping out - 3rd place was still up for grabs after all. Also, the very slow time control caused a number of players to lose interest in their own games as they were taking frequent strolls when it wasn't their move.
Hi Mark, Actually, I eventually lost, despite having a likely draw at move 38. Unfortunately, as we were the only game remaining, somehow the result was recorded incorrectly. At that point, everyone was exhausted and prone to error! Thanks, Tom Beckman
Fun times for girls in Chess! Besides Carissa, Nikki and Prani there was Sahasra Goli winning first in the Scholastic event K-8 U1000! Going 4/4 and raising her rating over 200 points as well! That makes a rating increase of 900 points in 4 months since beginning USCF rated play! Congratulations to all the winners for working so hard at chess keep up the good work!
Dear Jamaal, Great article!! Thanks for covering the tourney, Tom
My pleasure. Thanks for putting it on.
Great news to see gender divide diminishing with each new generation. My uncle, George Mirijanian had hopes for me having the appetite for the game years ago (Backgammon was more my style) but did instill in me a lifelong interest in the game. So proud of these young women!
So glad I was able to share their story, Sally. Thanks for reading.
I once played Nikki at the Liberty Bell Open in Pittsburgh. She was a tough opponent, extremely underrated. I was somewhat lucky to get away with a draw. Glad to see she's doing well! Cheering for you! Ryan
I'm guessing you meant to say Philadelphia, not Pittsburgh. In any event, thanks for reading and for your support.
In Lenderman-Enkhbat, 17. Bxd8 should win on the spot. Of course, then there wouldn't have been any good knight vs. bad bishop ending.
Game was recorded incorrectly. Black's 13th move was qd7, NOT qc7