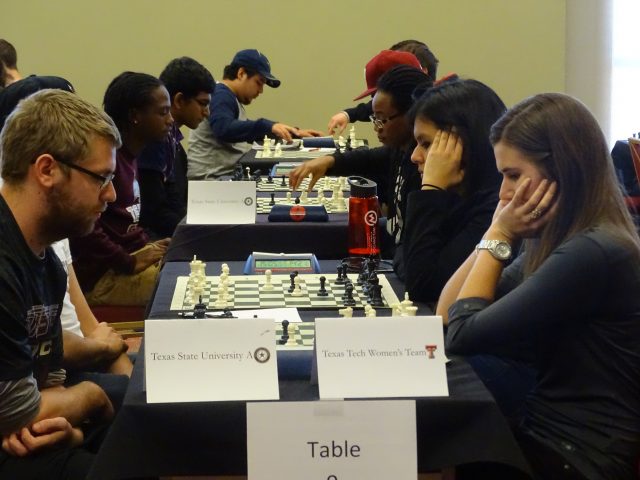 Just over a year ago, the directors and coaches of the top three collegiate chess programs in Texas, including Texas Tech University, the University of Texas Rio Grande Valley and the University of Texas at Dallas, got together to build a new format for the South West Collegiate Championship. The tournament transformed into a one-day rapid tournament with a time control of 15 minutes per game and a 10-second increment per move. Another unique innovation was reducing of the number of boards. Our goal is to attract more players and from an elite-oriented tournament, while making it accessible for all collegiate players. Therefore, the three-player team makes it easier for smaller colleges and programs to participate in such event. The new format proved a great success. Twenty-three teams participated in this year's event on February 25. Levels ranged from unrated players to very strong grandmasters. Twenty-nine members of the Knight Raiders chess club, founded in 2003 by Dr. Karlsson, professor of Geology, represented Texas Tech University. The University of Rio Grande Valley participated with six teams, and while the University of Texas at Dallas had four teams. The tournament was hosted by Texas Tech University in Lubbock. During the offseason, the football stadium is empty, but it regained life for one day by becoming the home of the chess tournament. The tournament was played in one of the nicest suites and all players and coaches were invited to lunch on behalf of the organizers. The playing conditions were excellent. 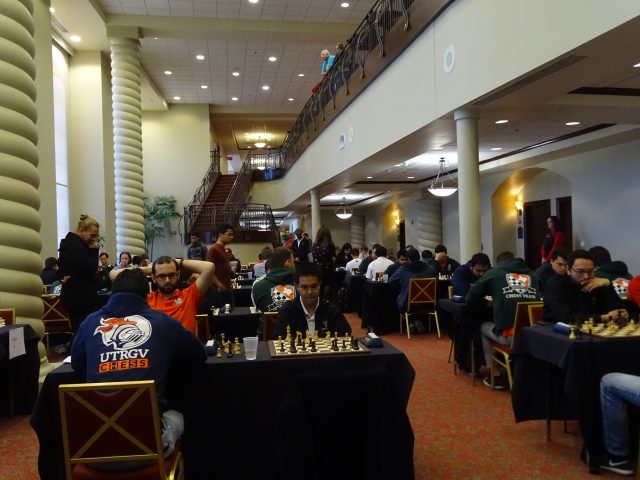 Traveling from San Marcos, Texas State University made its debut at the SW Collegiate. Former Texas Tech alumni, Dr. Susana Villanueva recently became a professor at Texas State. In less than two months, she got involved with the chess life on campus, became a faculty advisor, and brought two teams to play in the tournament for the first time in the club history. 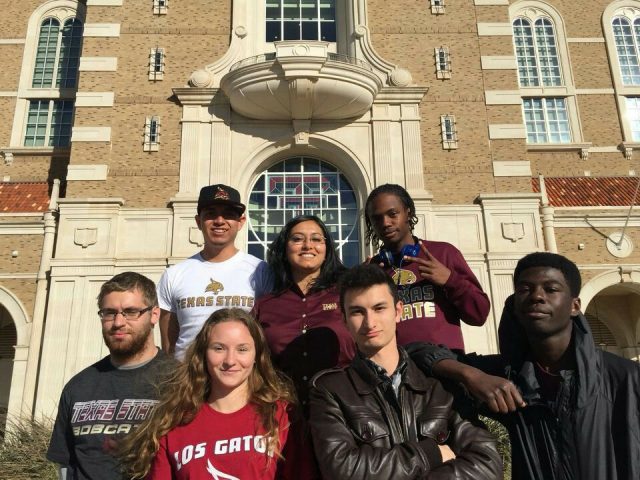 Professor Susana Villanueva in the middle and the Texas State Team
Another new school which participated was the University of Oklahoma. Chess is big on their campus. Despite a small budget, the OU chess club has more than 200 members! Both Texas State and OU fought very well and finished in the middle of the cross table. The Texas Tech A team won the event with a fantastic result. Scoring 14.5 individual points out of 15 games, they succeeded in winning all five matches. Having one GM and two international masters made the TTU A team slight underdogs since at least three other teams were higher rated and consisted fully of GMs. However, all three players Andrii Baryshpolets, Sergey Matsenko and Pavlo Vorontsov turned out to be in excellent form and played very good chess. Here are two games annotated by TTU players Andrey Baryshpolets and Pavlo Vorontsov: 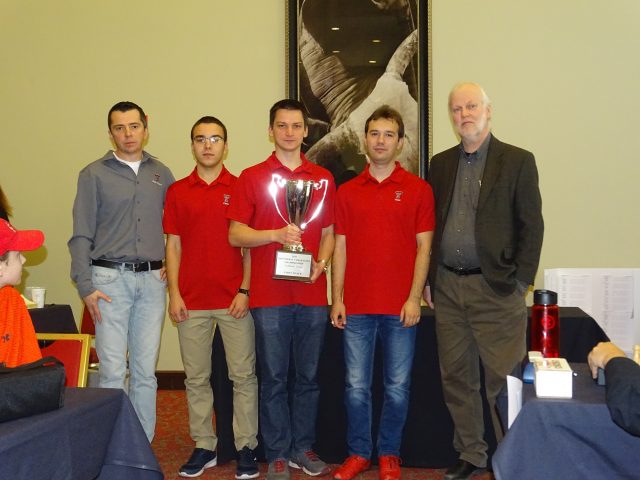 Picture of the winning team: Alex Onischuk, Pavlo Vorontsov, Sergey Matsenko, Andrii Baryshpolets, Dr. Hal Karlsson
Three teams tied for second place but UTRGV A team finishing second by tie breaks leaving UTD B and C third and fourth, respectively. Next year the tournament will be in Dallas and I expect even better attendance. It is great to see collegiate chess growing! See you at the Final Four! Look for our college related articles on US Chess, including a piece on the 2016 Pan-Ams by Al Lawrence.
SHARE: