The National Elementary School (K-6) Championship is off to an exciting start. With more than 1,000 players from 42 states convening in the Buckeye State, US Chess staff and volunteer are getting ready for a weekend full of exciting events and chess competition.

On Thursday, pieces were moving fast and furious for the K-6 Blitz and Bughouse tournaments.

At the Bughouse event, cross-country forces united to a victorious end. 6th-grader Aaron Marian of Florida and 6th-grader Oliver Boydell of New York won in convincing fashion with a perfect score of 10/10. 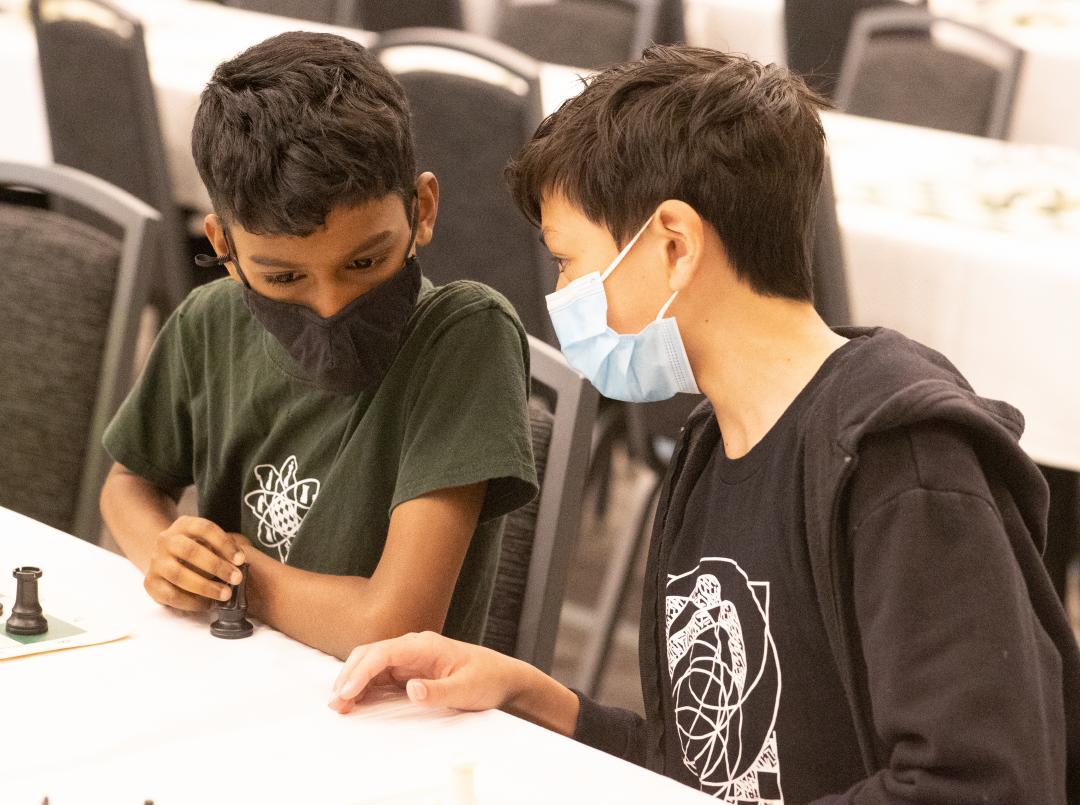 The Blitz tournament provided high-intensity action with more than 120 competitors in K-6 and K-3 sections.

Competition for the top spot in the K-6 section included our Bughouse champions Aaron Marian and Oliver Boydell, as well as 6th-grader Eric Liu from Texas. Eric has been making the rounds on the 2022 US Chess National Scholastic circuit, placing 2nd at the National Middle School Championship in both the Blitz and classical competitions last month and placing 26th at the National High School Championship in early April. Would third time be the charm for Liu?

Heading into the final round in the K-6 Blitz, California 6th grader Isaac Wang was in the lead by a half point with 8½/10, with a seven-way tie brewing just below. Among the storm was Liu, Marian, Boydell, Oscar Williams, and Anjaneya Rao.

Fierce competition coupled with the precarity of blitz scattered the groundswell after the final moves. Wang couldn’t hang on to his fifth-round lead, with Oscar Williams holding him to two draws. And with wins on their final pairings, Eric Liu emerged as co-champion with Anjaneya Rao, each scoring 10/12. 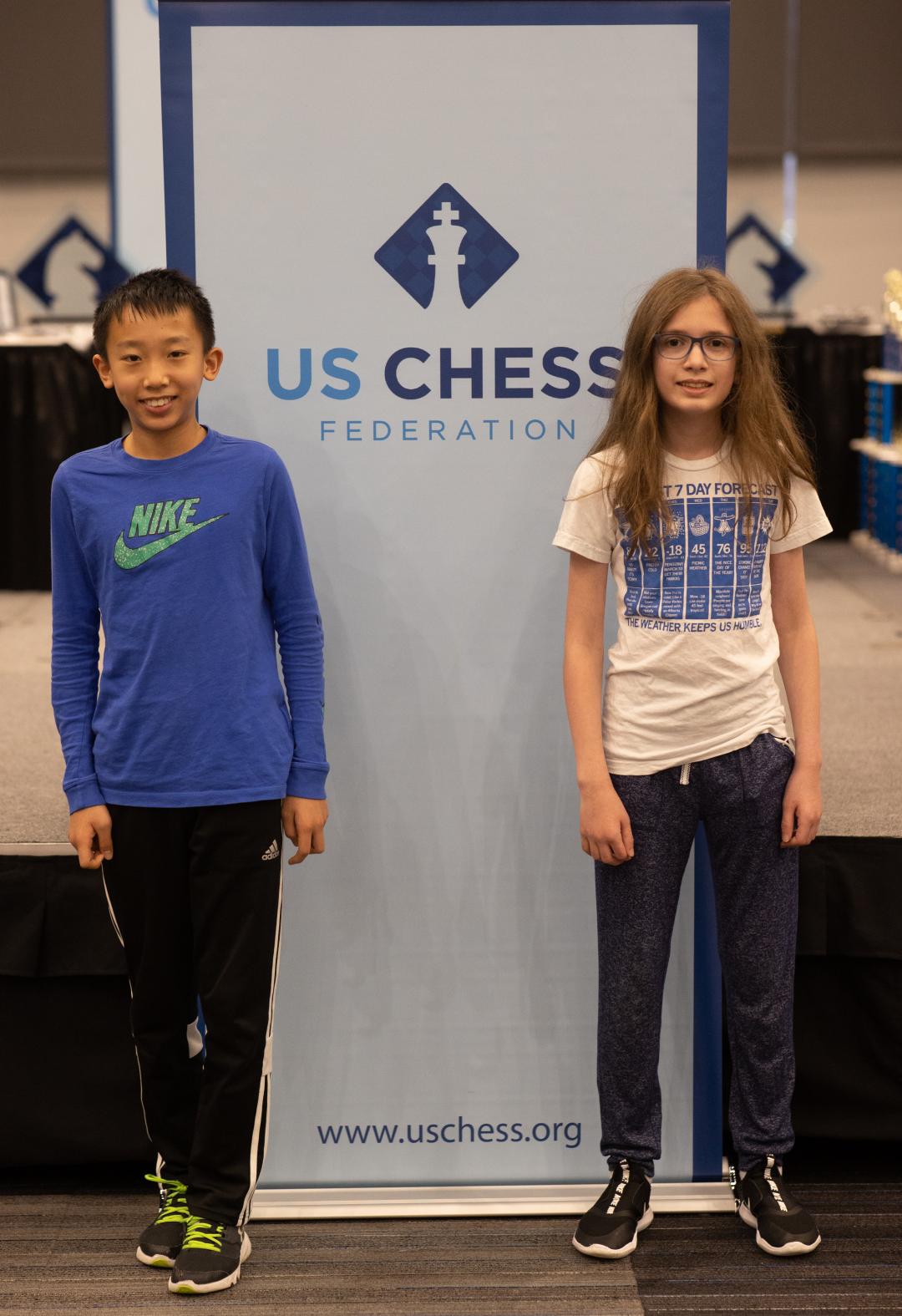 In the K-3 section, Sivavishnu Srinivasan and Yuvraj Sawhney were crowned co-champions with a score of 10/12. According to Sivavishnu’s father, the 3rd grader was eager to play after OTB events had been cancelled because of COVID for the last two years. “I thought, well, it’s time,” he said. “Let’s go to the biggest tournament in the country.”

Extra-Curriculars at the K-6

In addition to the competition in the main playing hall, this national event will feature appearances from not one, but two guest grandmasters. GMs Joshua Friedel and Elshan Moradiabadi hosted a 22-board tandem simul this morning. The focus on both sides of the board was intense!

At the end of the event, the grandmasters prevailed with a score of 22-0. Throughout the weekend Joshua and Elshan will take on all comers for some fun, casual blitz, and give special lectures for those in attendance.

The US Chess Girls Club will be full of activity with WGMs Jennifer Shahade and Katerina Nemcova, along with Coach Krista and Arthur Alton providing a welcoming space for female players and their coaches and families. There will be chess trivia, meet-and-greets, game reviews, and even a human chess game! 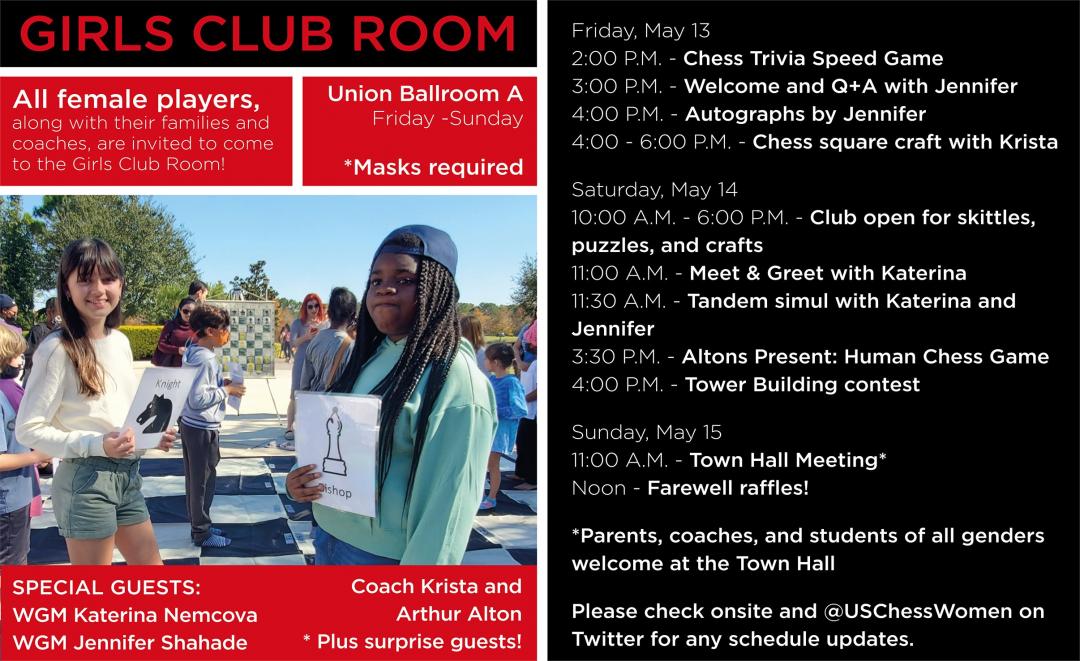 US Chess will be broadcasting live commentary and analysis from our Twitch channel for rounds 5 through 7. First broadcasts begin at 6 p.m. ET on Saturday with special guest commentators WGM Katerina Nemcova and FM Gauri Shankar, who will provide insights and connect all the critical moves for the top boards. Give us a follow, subscribe, and watch live at www.twitch.tv/USChess.

We'll be following and sharing all the action and highlights here at Chess Life Online and our our social accounts. Be sure to tag your K-6 tournament posts with #ElemChessChamps so we can be sure to see them!