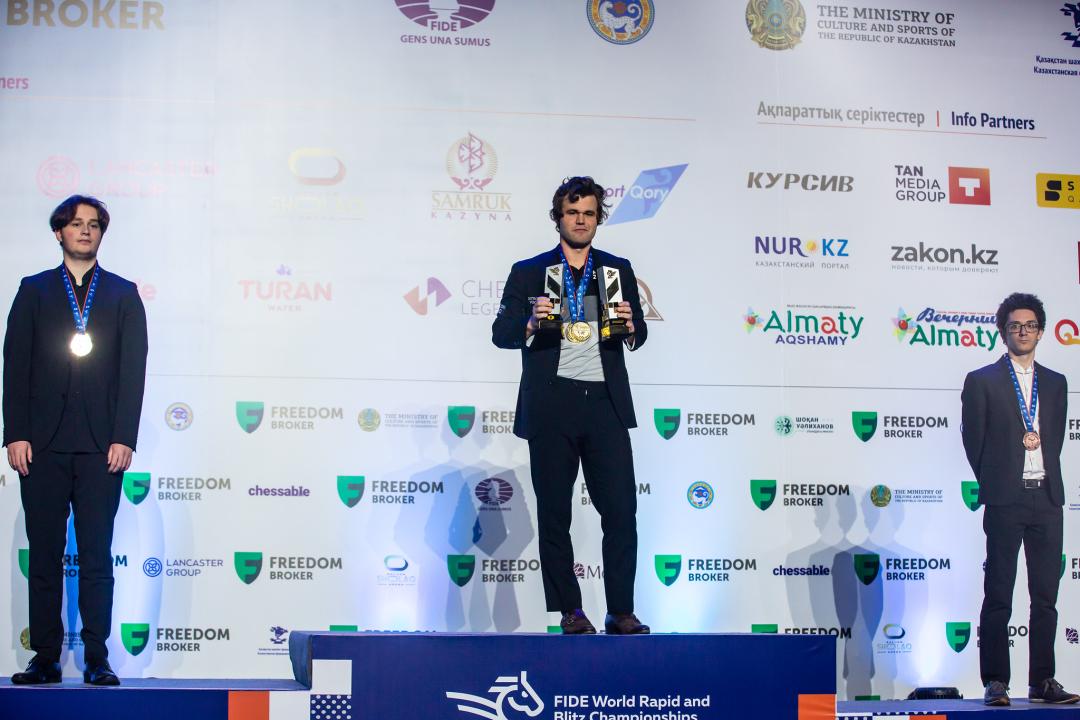 GM Magnus Carlsen won the second leg of his quest for the triple crown on December 28, winning the 2022 World Rapid Championship in Almaty, Kazakhstan. Known for getting off to rocky starts in these events, Carlsen missed several chances in his first round. 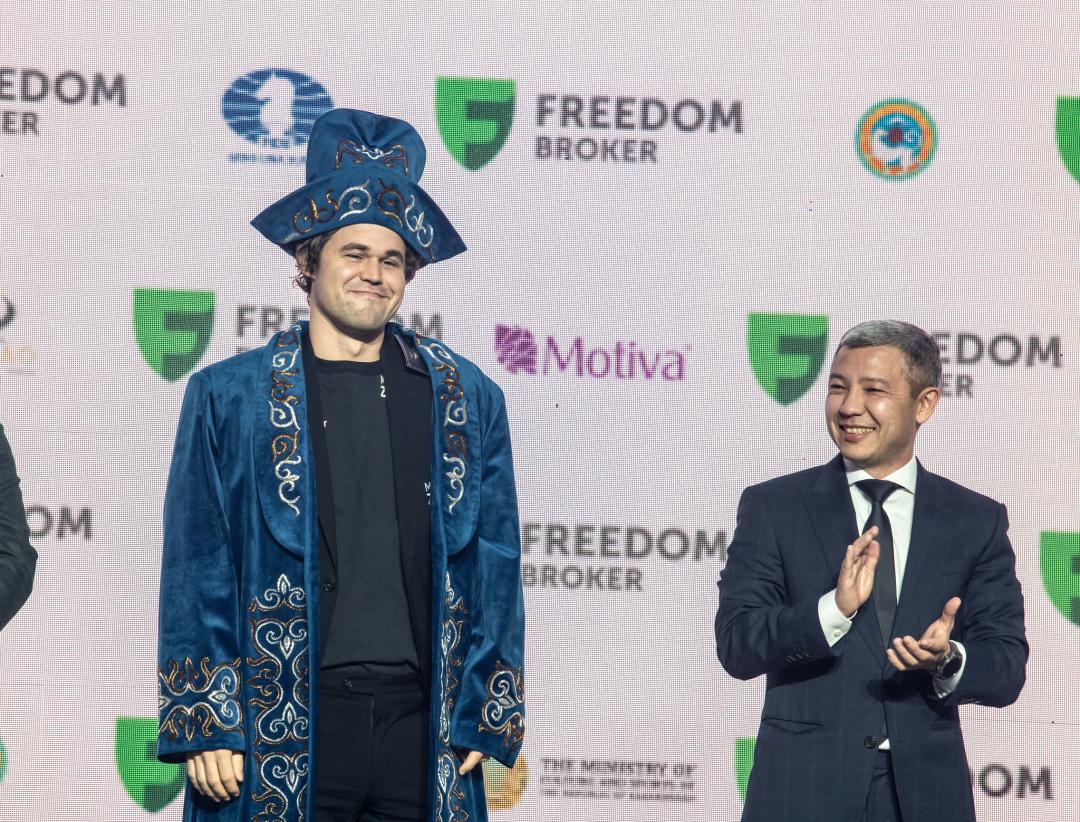 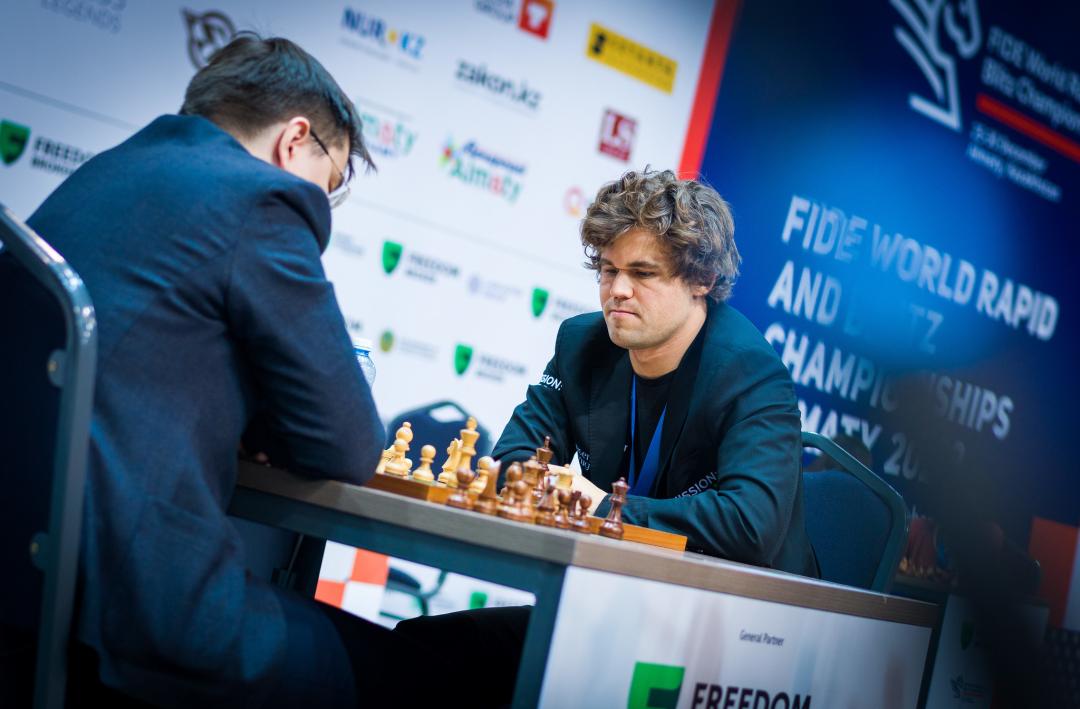 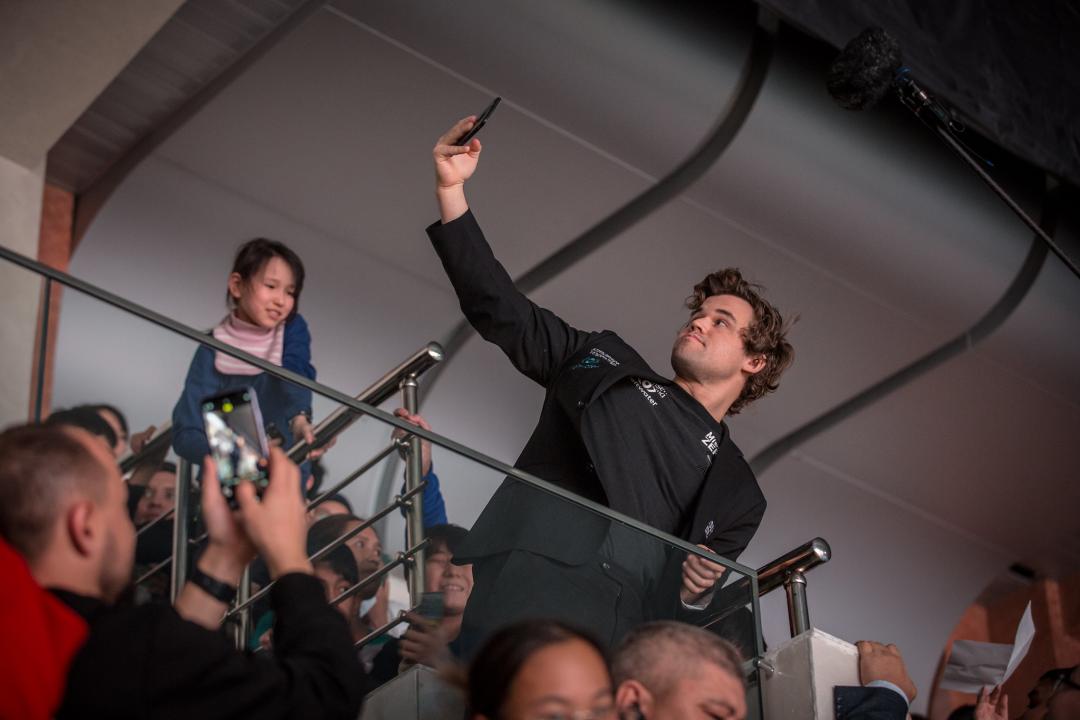 "Does anybody else have good signal here?" (courtesy Anna Shtourman) 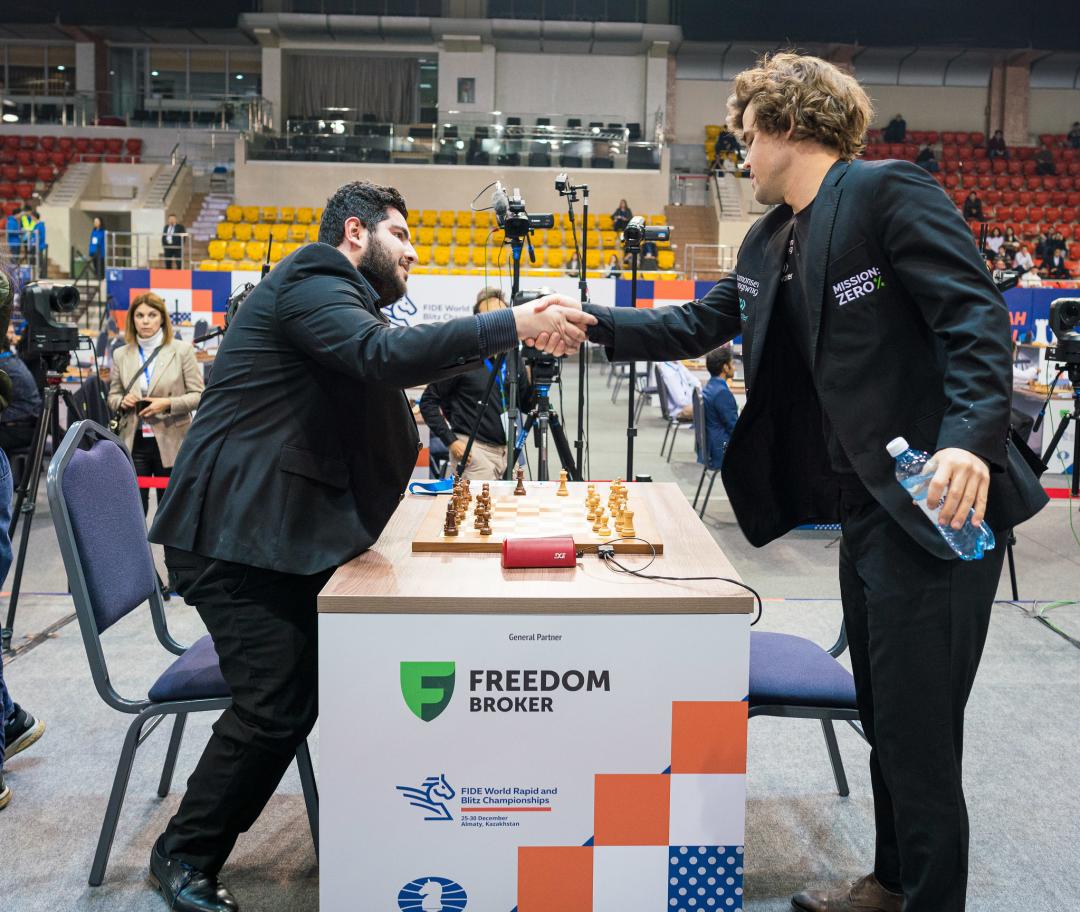 Carlsen clinches at least a share of the title! (courtesy Lennart Ootes)

This turned out to be a blip, as Carlsen coasted to sole first with 4/4, getting his revenge on the reigning World Rapid Champion in the process. Previously, Carlsen had never remained perfect for more than a single round in this event. It would be a stretch to say he was already attempting to channel his inner Fischer, with dreams of a perfect score, but there is something very "Fischy" about his opening and plan in this game:

From there, Carlsen did just enough to stay ahead of the field until the unthinkable happened in round 11. In a calm, equal position, he blundered a piece to a relatively simple tactic:

Headed into the final round, Carlsen was in joint first with Artemiev and the surprise of the event, 18-year-old German GM Vincent Keymer. Carlsen did his part to ensure he would earn at least a share of the lead, defeating Iranian GM Parham Maghsoodloo in resounding fashion. Switching from 1. b3 to the more principled 1. e4, he conducted one of those attacks in the Richter-Rauzer variation of the Classical Sicilian that looks like it just plays itself:

Carlsen’s 10/13 performance over three days was a half-point ahead of 18-year-old German GM Vincent Keymer and American GM Fabiano Caruana. “Fabi” earned his spot on the podium by defeating Artemiev in the final round with a lightning bolt of a tactic. This capped off a strong 3/4 finish on the final day that also included a dominating win over GM Vladimir Fedoseev that deserves consideration for game of the tournament. 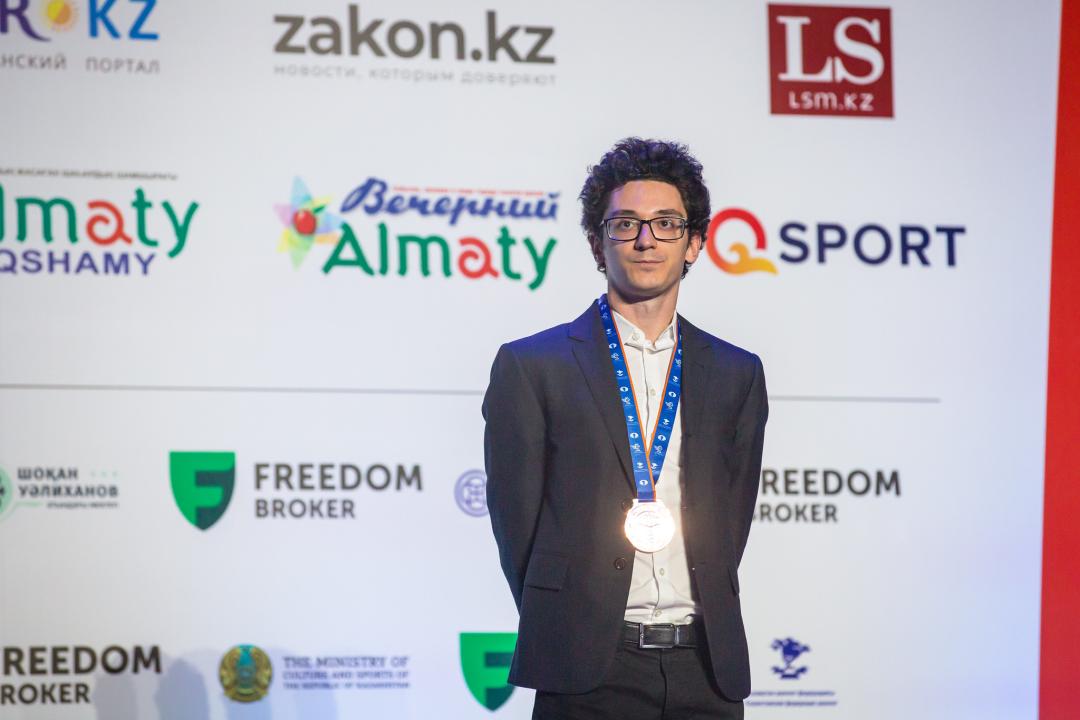 Caruana’s rapid rating of 2747 was only good for the eighth seed at the start of the tournament, well behind Olympiad teammate GM Hikaru Nakamura, who started on board three just five points shy of 2800. After a promising start, including a nice win over GM Alexander Moiseenko, Caruana appeared in fine form.

Then, in round six, Caruana was the victim of a major upset at the hands of Keymer, who started the event on board 54. That said, Keymer, unlike Caruana, has played in a Mr. Dodgy Invitational, so maybe Caruana was the true underdog, after all.

very impressive to see an unprestigious player on the podium pic.twitter.com/VQs1foYDgF

Not even such a prestigious pedigree, which also includes being the prized pupil of Hungarian GM and commentator Peter Leko, was enough for Keymer to force a playoff against Carlsen. In the final round, playing the black pieces against notoriously stodgy defender GM Maxime Vachier-Lagrave, Keymer played with energy and clarity to force a winning endgame. 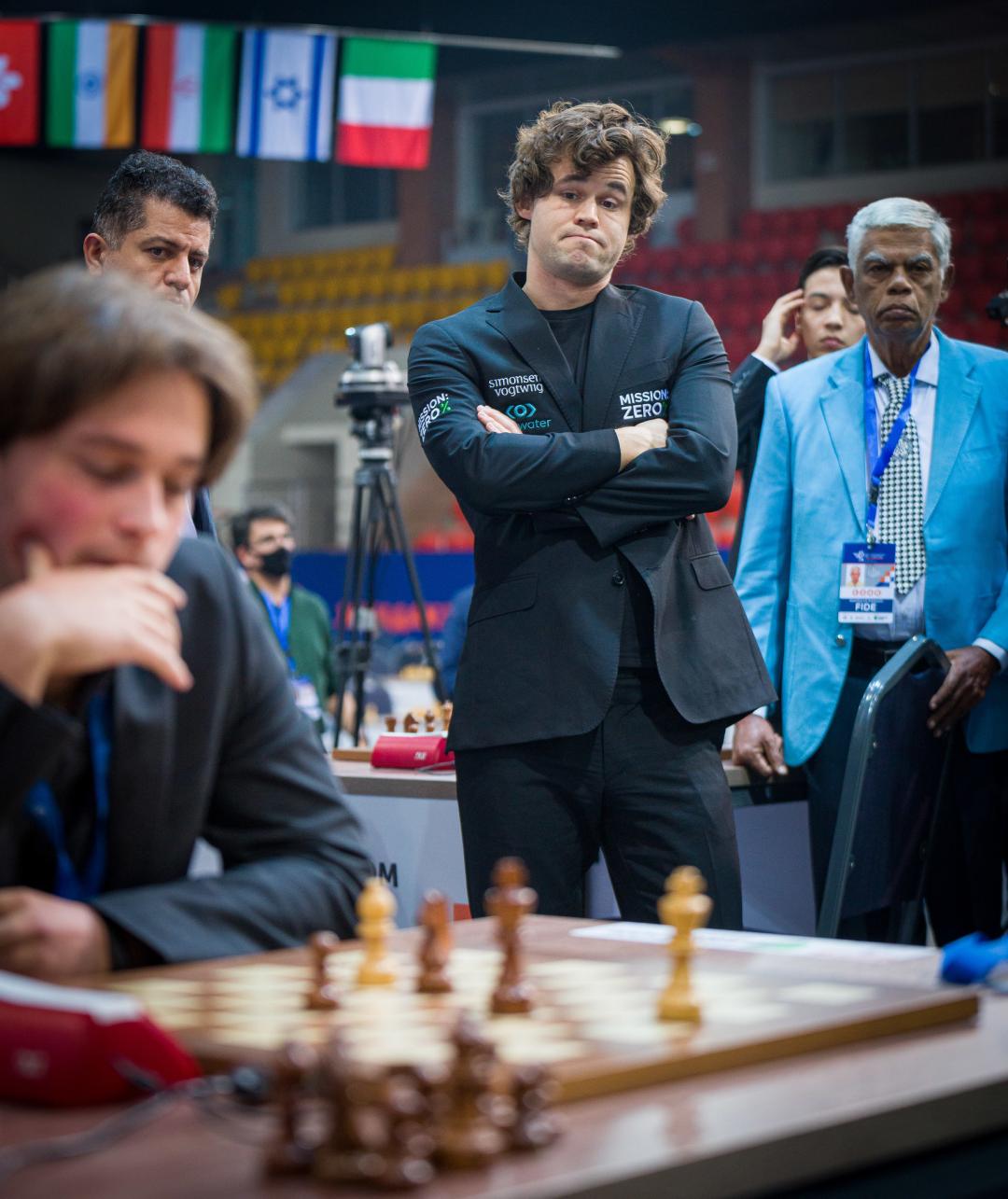 Then, with “MVL” holding on for dear life, Keymer correctly forced a rook trade, but pushed his extra passed pawn one tempo too soon, as his chances to dethrone Carlsen evaporated in an instant.

Behind Caruana, the top American finishers were Nakamura and GM Christopher Yoo. While both finished with 7½/13, Yoo produced eight decisive results to get there compared to Nakamura’s two. An example of Nakamura’s conservative play and ensuing defense came from the very first round, and set the tone for his event: 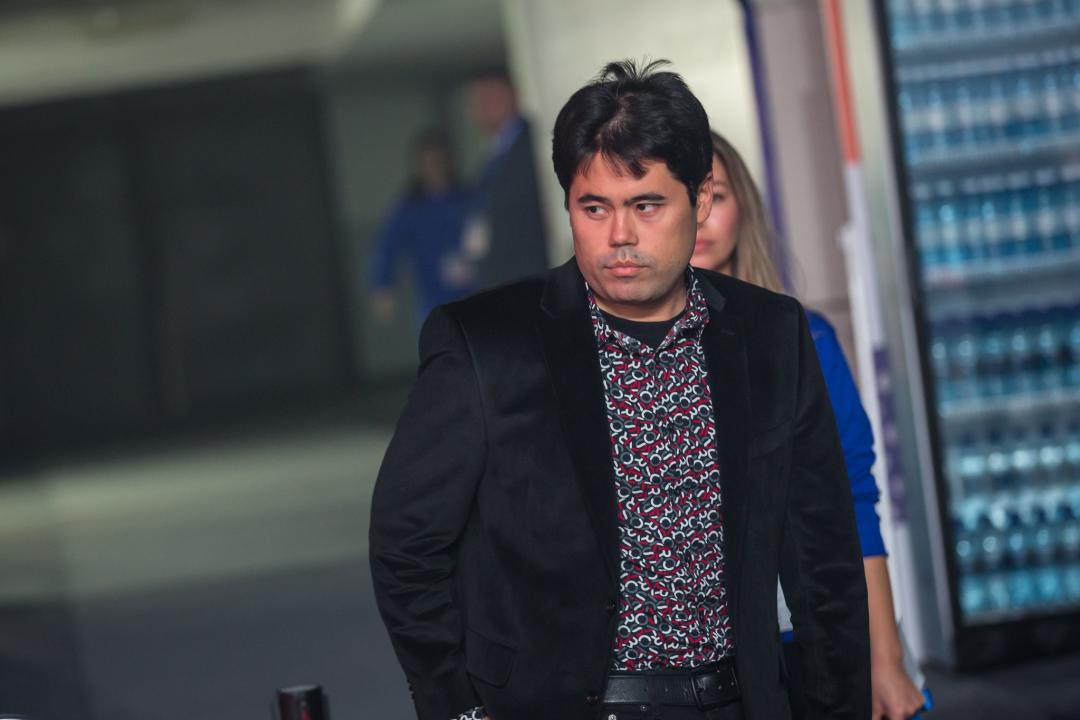 Image Caption
Hikaru Nakamura, knowing that the blitz event is only a few days away (courtesy Anna Shtourman)

Yoo’s results were, overall, much more impressive. His victories included a nervy win against a familiar name for those who peruse LiChess leaderboards. 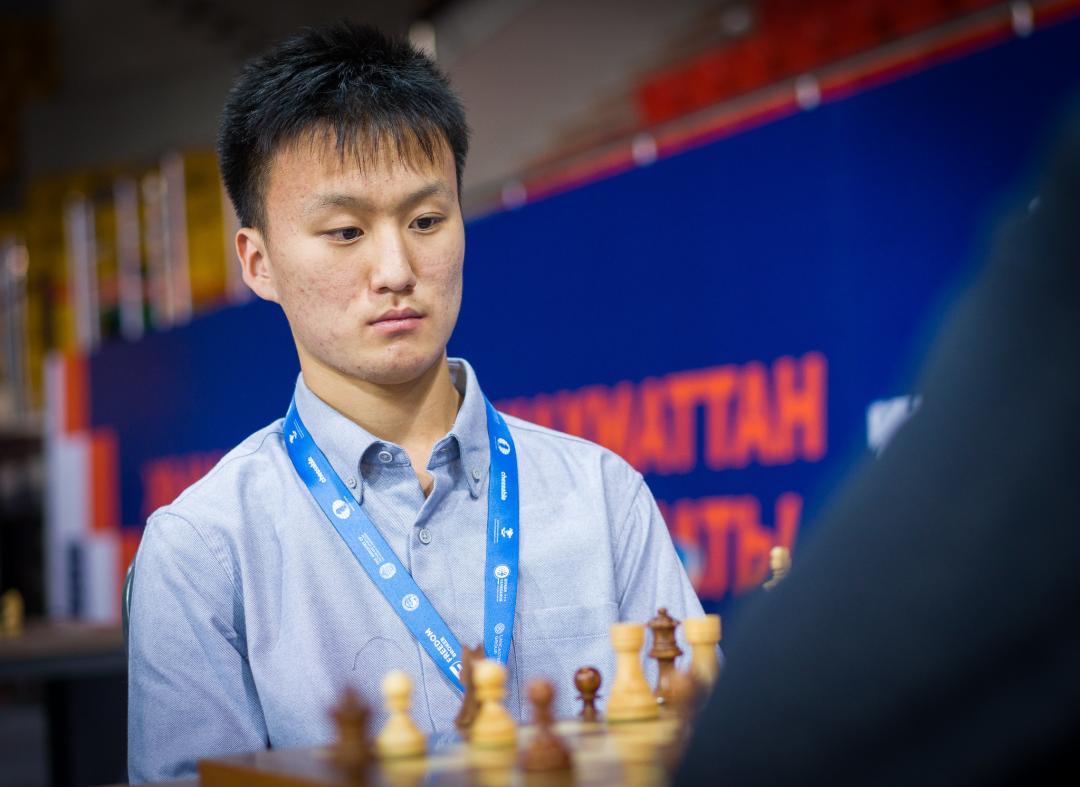 Another familiar name in online chess, bullet superhero GM Andrew Tang, had a strong showing finishing with 7/13. His most notable game, though, was a rough loss against an Azeri grandmaster that shows the beauty and agony of this horrible game we all love. 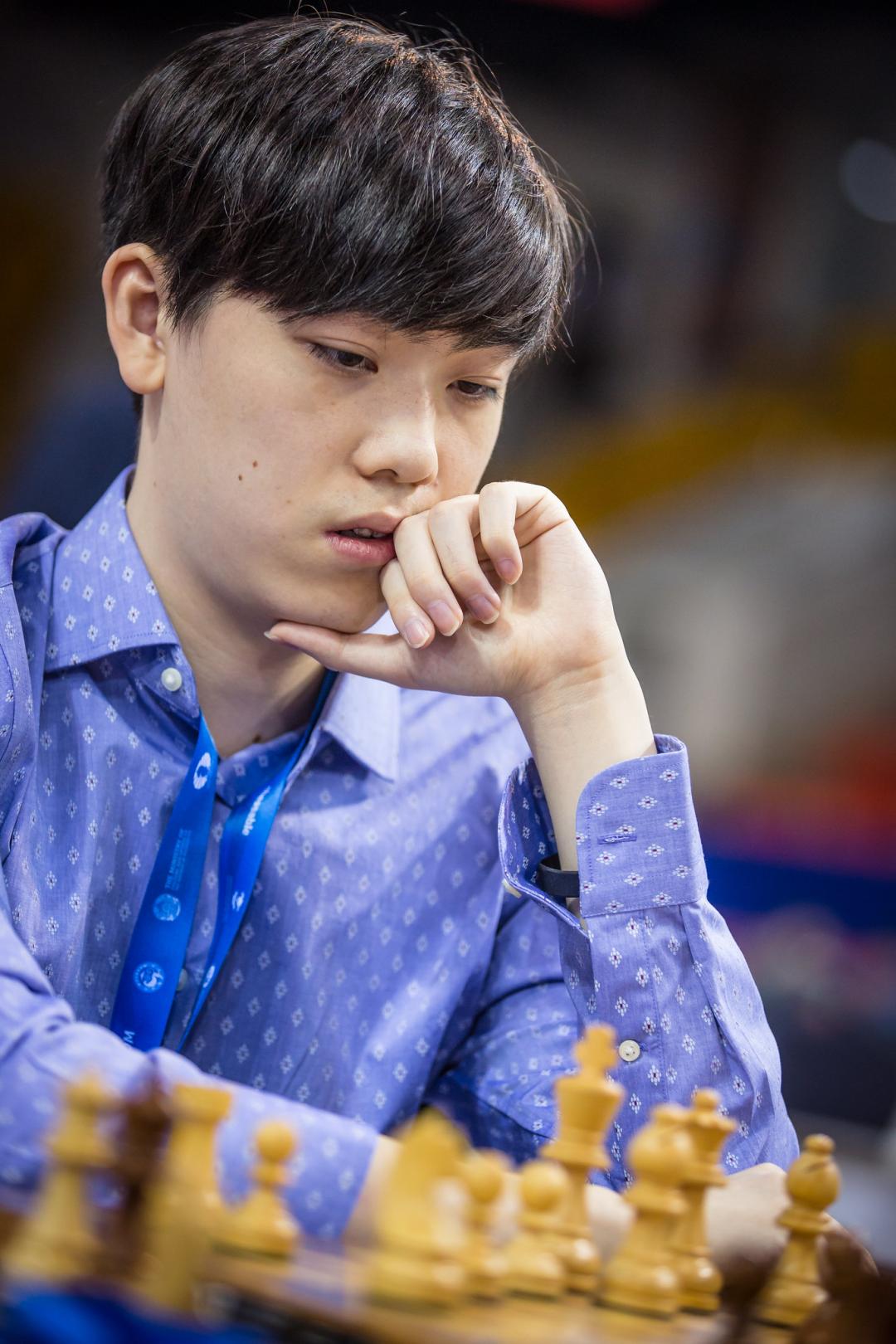 GM Hans Niemann had a strong start to his event, culminating in a nice win over GM Richard Rapport in round seven. 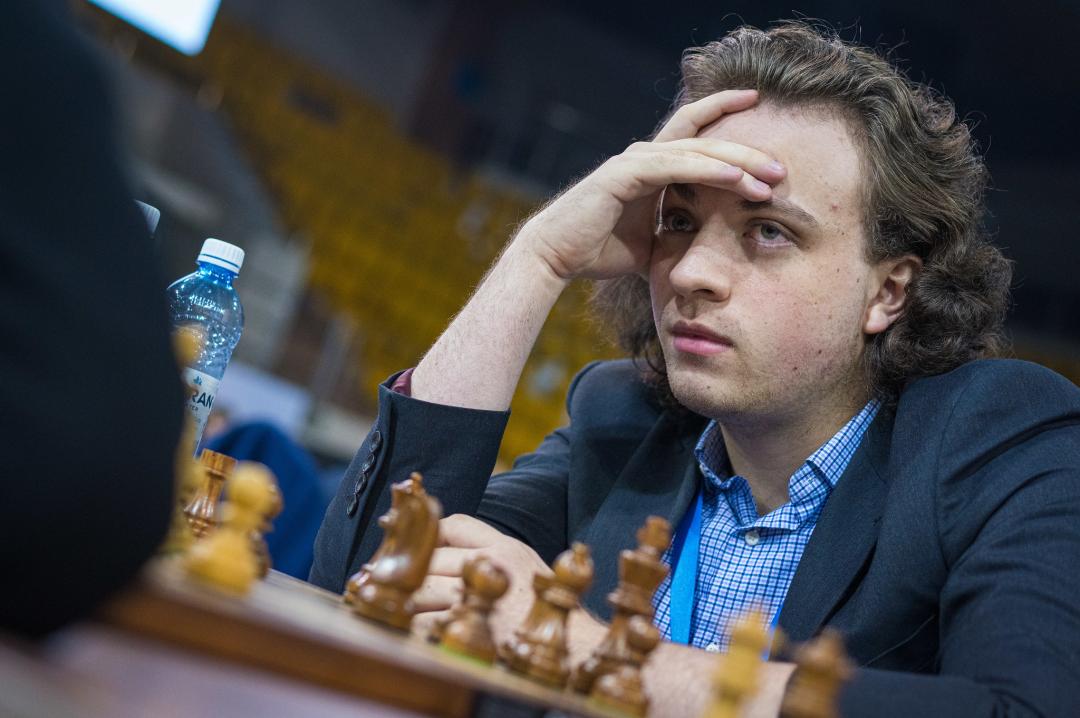 From there, Niemann’s tournament began to unravel, and he finished with a trio of losses to end up at 6/13. Perhaps he was “tilted” by missing a mate-in-two in round eight? 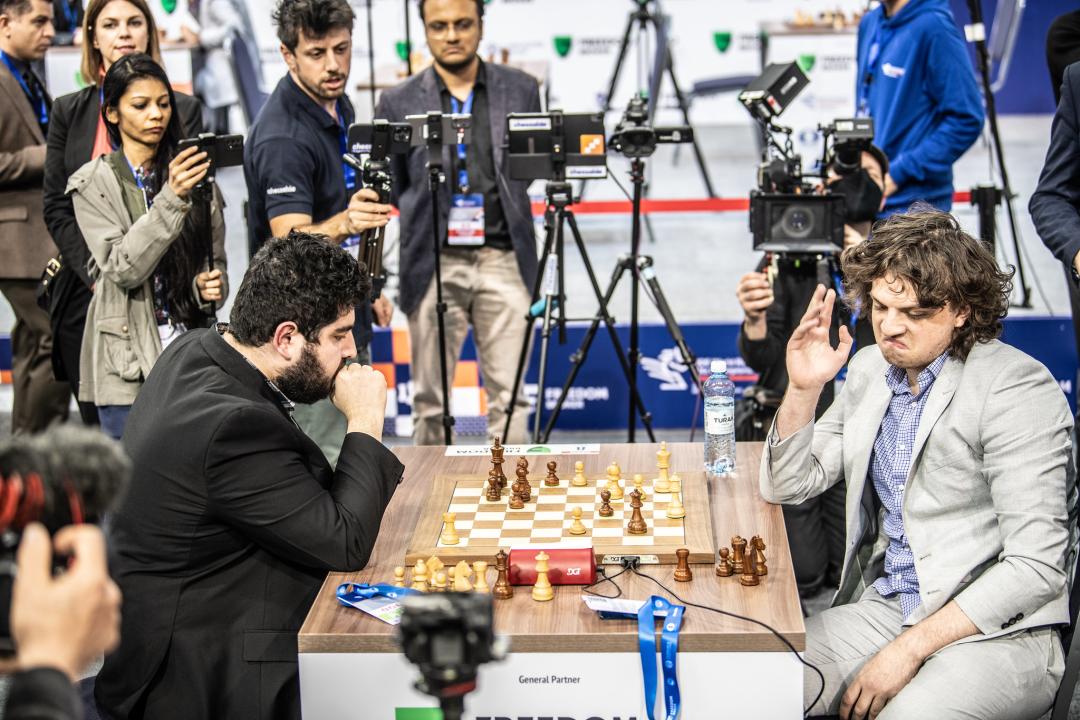 With over 1,000 games taking place in three days, there were sure to be some brilliant moves. No tournament recap would be complete if it did not include the 2019 champion GM Daniil Dubov’s brilliancy. While he was unable to repeat his feat from three years prior, he did have the flashiest move of the tournament against GM Nihal Sarin.

For more annotated games, be sure to check out our LiChess study, and stay tuned for coverage from the Women's World Rapid Championship and the World Blitz Championships.