Last-Second Substitute Wins Most Prestigious Online Event of the Year 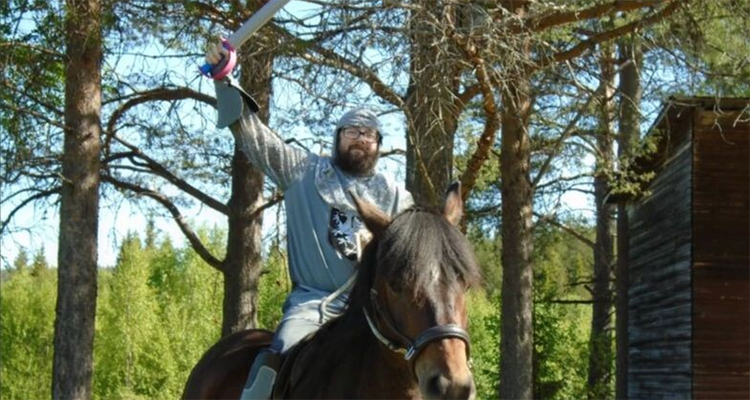 It started as a joke. Then, in 2020, it became an online eight-player Round Robin with only one prize. The prize was a picture of a man on a horse.

to combat inflation, the #MDI3 prize will be a picture of me on half a horse

As the prestigious tournament grew in reputation, the self-proclaimed "Tournament Dictator" decided to expand the field and include a number of open-to-all qualifiers. As a result, Americans such as IM Eric Rosen as well as GMs Andrew Tang and Samuel Sevian managed to get a shot at immortality.

For those wondering who this international man of mystery is: he is funny.

who am I to argue with The People https://t.co/BIgQ6Ortnn

He is also a world-renowned mushroom forager.

does this look safe to eat pic.twitter.com/Oh2jmqNMeD

Following a commitment to transparency that has been a hallmark of this prestigious invitational dating back to its first year, "Mr." Dodgy made himself available for comment on this tournament.

When asked about how players were selected, he replied that, "There's strict criteria for invites, but the main ones are, [first] people I like and [second] people who are easy to contact. Also Lawrence Trent."

Perhaps the most shocking development was revealed only an hour before the start of the first group stage.

I'm here so I won't get fined https://t.co/phbTeTYAmU

Dating back to its first (still prestigious) year, the World Champion's refusal to participate in the prestigious event has been a running joke between Mr. Dodgy and himself.

Disappointing but I will persevere

Some spectators were suspicious of Carlsen's unorthodox qualifying route.

there's still time to sabotage someone's internet for tomorrow and apply as substitute, as @MagnusCarlsen has shown

Indeed, the organizer himself had suggested that such antics would be tolerated, if not outright encouraged.

need a scandal to make the #MDI3 go viral, any suggestions? no actual criminality please, I know you people

From the start, there were questions of whether Carlsen would be able to handle the pressure of such a prestigious event. His upset loss against Polish FM Kamil Plichta, who took the opportunity to promote a new Chessable course on the Trompowsky, only added fuel to the fire.

Plichta, it must be said, deserved credit not only for his play but for his understanding of the spirit of the tournament.

Now the plan is to score 0/14 in other games and go for memes. pic.twitter.com/Vi0nXIJw1x

But Carlsen bounced back, winning the group stage ahead of GMs Daniil Dubov and Rauf Mamedov. 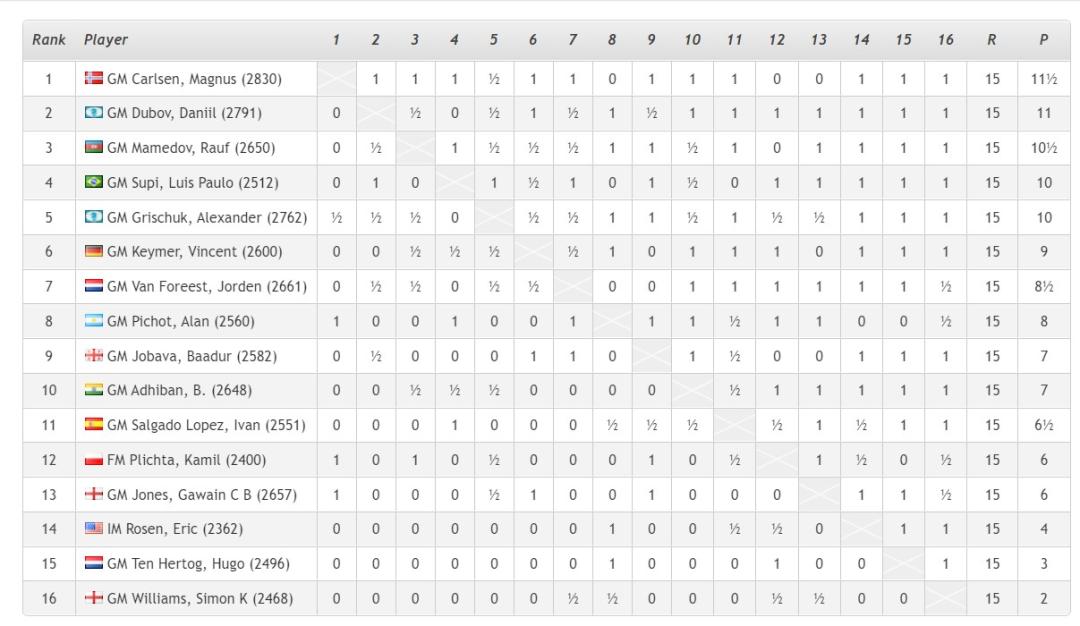 Afterwards, he put to rest any rumors that he was not taking the event seriously.

Magnus Carlsen had some fighting words after winning his 1st ever Mr Dodgy Invitational knockout match 7:0: "This is a prestigious tournament, so even though I didn’t really want to play, as long as I’m here I’m taking it fairly seriously!" https://t.co/o9ZUv2iWgg

Dubov, the eventual tournament runner-up, also had a strong showing in this group. His reputation for creative opening play was on hyperbolic display in many of his early games, including his playful win over GM Simon Williams.

When Carlsen and Dubov met in what turned out to be a preview of the prestigious finals, the chess (and early flank-play) spoke for itself:

In the second group stage, Azeri GM Mahammad Muradli finished a full two points ahead of Peruvian GM Jorge Cori and Sevian, with all three taking the opportunity to show off their speed. 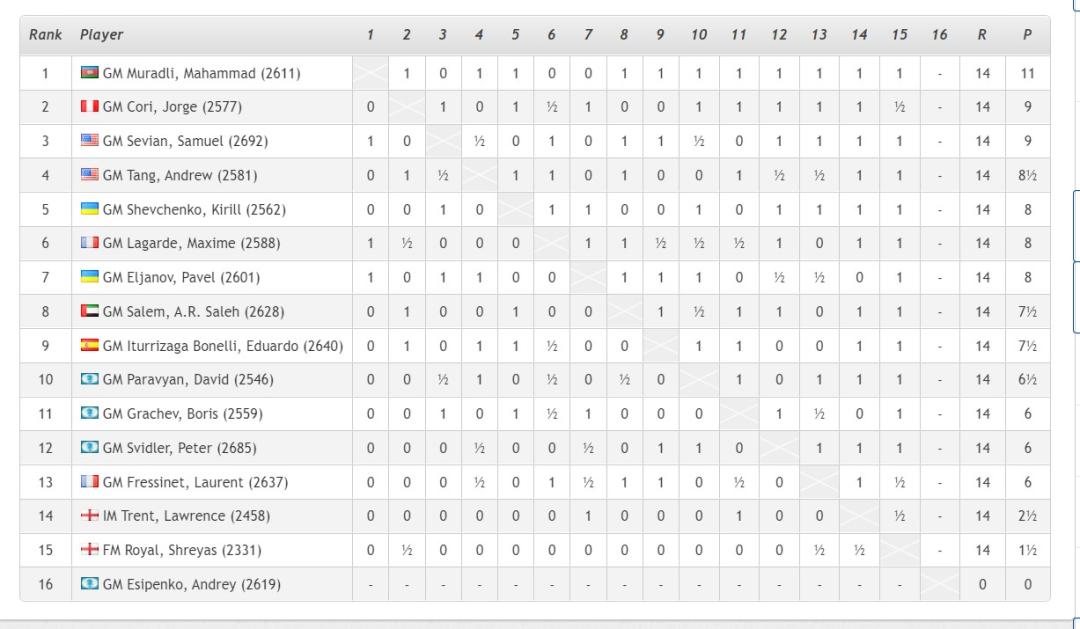 While online blitz tournaments are nothing new, the prestigious invitational drew extra intrigue from the bold choice to continue the tradition of playing without increment. As a result, players had an opportunity to not only display their mouse skills, but also their devilish nature.

Excellent dirty flag by Cori on Fressinet in the @ChessProblem tournament yesterday. Both had <5 secs (no increment), Fress played 1…Rxb7, expecting 2.Kxb7 he also premoved 2…Kxd6. Instead Cori replied 2.d7! and after 2…Kd6?? Laurent lost on time after 3.d8=Q… pic.twitter.com/6jxdoUtwDv

Sevian's blitz prowess was on display throughout the day, particularly in his win over pre-tournament favorite IM Lawrence Trent.

Another noteworthy surprise was the qualifier Tang. The American speedster won an open qualifier to earn his spot in the tournament, and nevertheless finished fourth out of the 16 players in his group. Beyond speed, he showed creative and daring play that made him a dangerous dark horse.

Then There Were Sixteen

Despite a number of upsets qualifying for the round of 16, familiar names began to surface by the time the semifinals were set. GM Alexander Grischuk, a former World Blitz Champion, was set for an all-Russian match against an overjoyed Dubov, himself a former World Rapid Champion.

Dubov: "One of my best days of the year was when I won this Halloween thing, with the masks. I was super-happy, much happier than when I won the Russian Superfinal" #MDI3 pic.twitter.com/FvAsrPsJnc

Grischuk's path was far from easy, as he only advanced past the round of 16 thanks to a tense 7-6 win over Tang.

Dubov also had to survive a 7-6 scare against Mamedov. After starting the match with some resoundingly lucky victories, Dubov appeared ready to dispatch his opponent.

But Mamedov came roaring back, forcing Dubov to close out the match in the final game. In an all-out attacking display perfectly suited to blitz, Dubov attacked simply, straight-forwardly, and fatally.

The all-Russian showdown ended 7-5 in Dubov's favor after Grischuk jumped out to an early 3-0 lead. In the first game, Dubov's attack did not work.

Then, in the third game, Dubov got out of the opening, but his king did not.

At this point, perhaps Dubov was reminded that he would be allowed to wear a horror mask in the finals.

in the interests of fairness (but not #transparency), both players are allowed to wear masks https://t.co/3AabbjCaPt

He looked more like himself from this point, closing out the match in style.

Carlsen's place in the semifinals was no surprise, but the same could not be said for his opponent. Sevian had been in top form all week, dispatching GMs Vincent Keymer and Jorden Van Foreest by wide margins. Here's Sevian going over 100 moves in five minutes, winning a drawn four-versus-four rook-and-pawn endgame against a world class opponent.

But as a 32nd birthday present to himself, Carlsen dispatched the lone American 7-1. The score is misleading, as Sevian was outright winning in several games before Magnus Magnus-ed the resulting endgames.

No matter how much of an attack Sevian could muster, Carlsen was always there with quick defensive resources and accurate endgame conversions.

While Sevian was not able to keep up with Carlsen, he will go down in MDI history.

After the match, Magnus won a gift (not prize) celebrating his birthday-twin and fellow MDI3 participant.

He channeled this energy into the final match against his renowned openings trainer.

Even when Dubov launched strong attacks, Magnus was too resourceful.

Winning 6½-1½, Carlsen's killer strategy was revealed in the post-mortem by his opponent.

Dubov "This is in general the problem of playing with Magnus — he plays random moves quickly. If you play random moves too, then you lose chesswise. If you try to think & start to panic, then you lose on time. You can choose the way you lose. I chose the latter one..." #MDI3 pic.twitter.com/QM2qNx8h0a

When asked what, if anything, he hoped his viewers would take away from a tournament once described as "a joke," Mr. Dodgy humbly offered that, "If nothing else, I hope I can inspire people to realize that if you post enough stupid stuff on the internet, you can do anything. Please post more stupid stuff."

On that topic, is it possible that there is bad blood between Mr. Dodgy and the reigning MDI champion? With this sort of behavior, it is unlikely he will receive an invite next year.

wow would it kill him to invite me https://t.co/3zLAOvmqBB

The previous (two-time!) MDI champion also had some advice for the heir to his throne.

He should write a series of books called My Great Predecessors.

What's next for Mr. Dodgy? While other organizers would consider a vacation, he is already making plans for future invitationals.