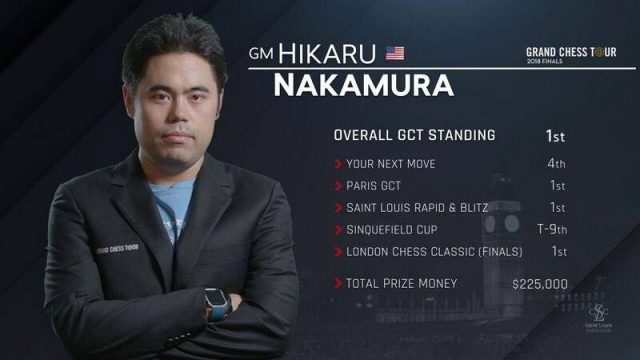 Hikaru Nakamura was crowned Grand Chess Tour Champion on December 17 in London after a tight match against the #2 rated blitz player in the World, Maxime Vachier-Lagrave. MVL even eclipsed Magnus Carlsen's blitz rating briefly during the event after beating Levon Aronian in the semifinals while Hikaru's road to victory included a semis match win over compatriot Fabiano Caruana. His match against MVL seemed destined for playoffs after seven draws (two in the classical, two in the rapid, and three in the blitz). And then Hikaru came through in a dramatic final blitz game, with an idea he came up with on break to break MVL's Grunfeld. If you haven't seen the full game yet, can you find the devastating final blow that Hikaru played in this position. Play through the full game for the solution. Nakamura picked up $120,000 for his win, raised his live blitz rating over 2900 and etched his place in Grand Chess Tour's young but promising history. He joins two-time champion Magnus Carlsen and Wesley So as GCT champs. How did Hikaru celebrate post victory? You guessed it! https://twitter.com/GMHikaru/status/1074755893592449025 During the final day broadcast, Grand Chess Tour spokesperson Michael Khodarkovsky announced some exciting changes to the 2019 tour. There will be additional stops in Croatia (classical chess) as well as India and Cote d'Ivoire (Blitz and Rapid events) as well as an increased minimum prize pool of 1.5 Million dollars. Find more details in the official press release. Fabiano Caruana won his own third place match against Levon Aronian, quieting critics who thought he was a massive underdog in blitz and rapid. The match was also very close, but in contrast to the Nakamura match, very bloody. Fabiano won his first rapid game, only to lost his first two blitz games. He then came back to win two in a row. Can you find the crushing blow in his penultimate blitz victory?