Worth the Wait in Gold: Caruana Wins in Candidates Restart 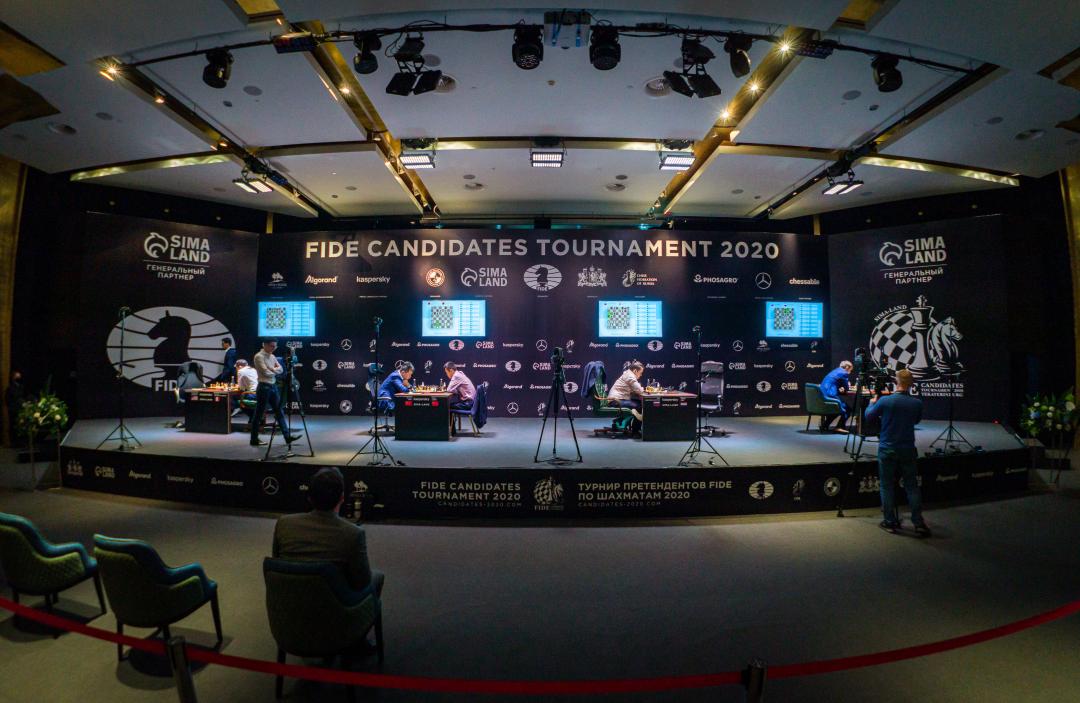 Now that was worth the wait.

American World No. 2 GM Fabiano Caruana made a triumphant return to the board on Monday, powering through a six-hour marathon against French GM Maxime Vachier-Lagrave to earn a full-point victory in the eighth round of the 2020-21 Candidates Tournament – now officially the longest tournament in the history of chess.

Complete with a 13-month intermission, the Candidates Tournament, the eight-player event to determine the next challenger to World Champion Magnus Carlsen’s title, resumed Monday afternoon in Yekaterinburg, Russia after being halted at its halfway point last March 2020 due to the global pandemic. 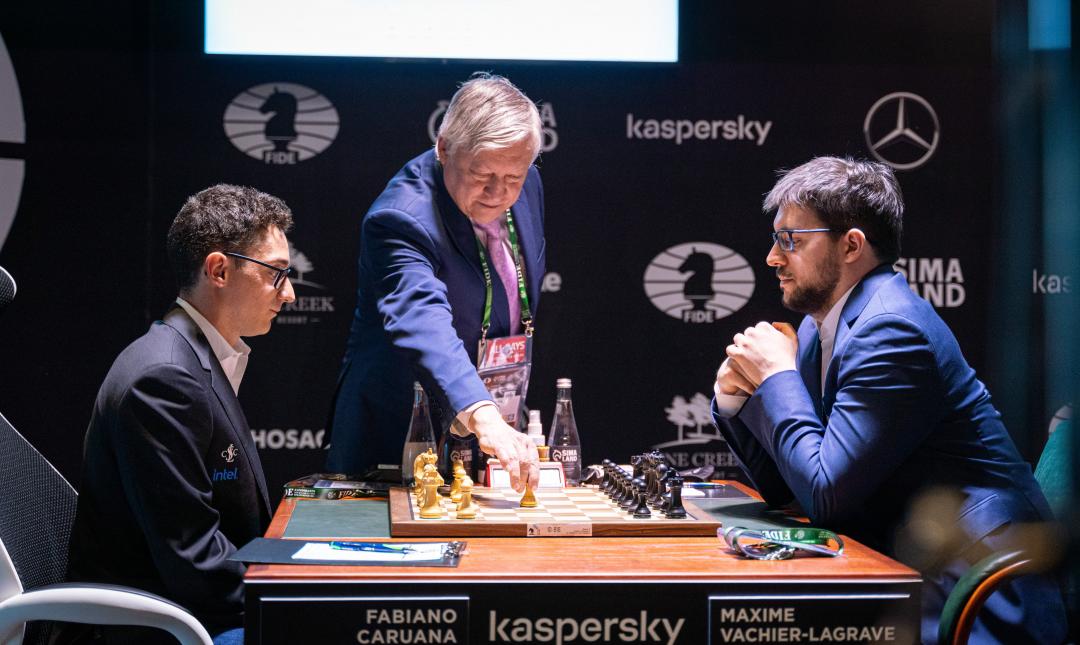 On the restart, American chess fans got everything they had waited nearly 400 days for – and more. Caruana came out swinging with 1. e4 and followed with a stunning display of preparation, steering the game into a Poisoned Pawn variation of the Frenchman’s pet Najdorf Sicilian, down a path similar to their last meeting in the Tata Steel Masters in Wijk aan Zee, the Netherlands, last January – which the American won.

But in Russia on Monday, Caruana brought the line anew, unveiling 18. Bc4! for a shocking novelty that temporarily saw the American down a bishop and three pawns, in exchange for a hyper-developed attack on several fronts and the promise of a blistering middlegame ahead for the Frenchman.

“With most opening ideas, it’s a one-time thing, and then you can’t play it again,” Caruana said of his novelty, which he credited to his second GM Rustam Kasimdzhanov. “Like this one, of course, Black has many ways to play it ... And actually, Maxime played the best way, I was kind of upset he played it this way, I thought [19. ... Nf6] was a very difficult move to find.

“I still wasn’t clear if it would work out or not.”

Ironically, the game with the fastest start was one of the last to finish Monday, as MVL painstakingly resisted Caruana’s relentless attack for nearly five hours before making the smallest of missteps. Caruana found blood from a stone-cold endgame, a rook-and-pawn versus knight-and-pawn dance that stretched the abilities of every chess engine and tablebase that exists.

Unclear if Caruana could break through MVL’s fortress until the very end, the American ultimately pushed the Frenchman into a state of zugzwang that allowed the white king to enter the position via a flank to the key h5-square. Resignation came at 74. Kg6, with Caruana’s monarch finally touching the remaining Black pawn.

Caruana’s win has dramatic effect on the tournament standings after eight rounds, breaking him out of a four-way logjam for third place and catching MVL, who had shared the lead during the break. The result ties the two super-GMs in second place with 4.5/8 points, now just a half-point behind sole leader GM Ian Nepomniachtchi from Russia, who drew his eighth-round pairing against Dutch GM Anish Giri. 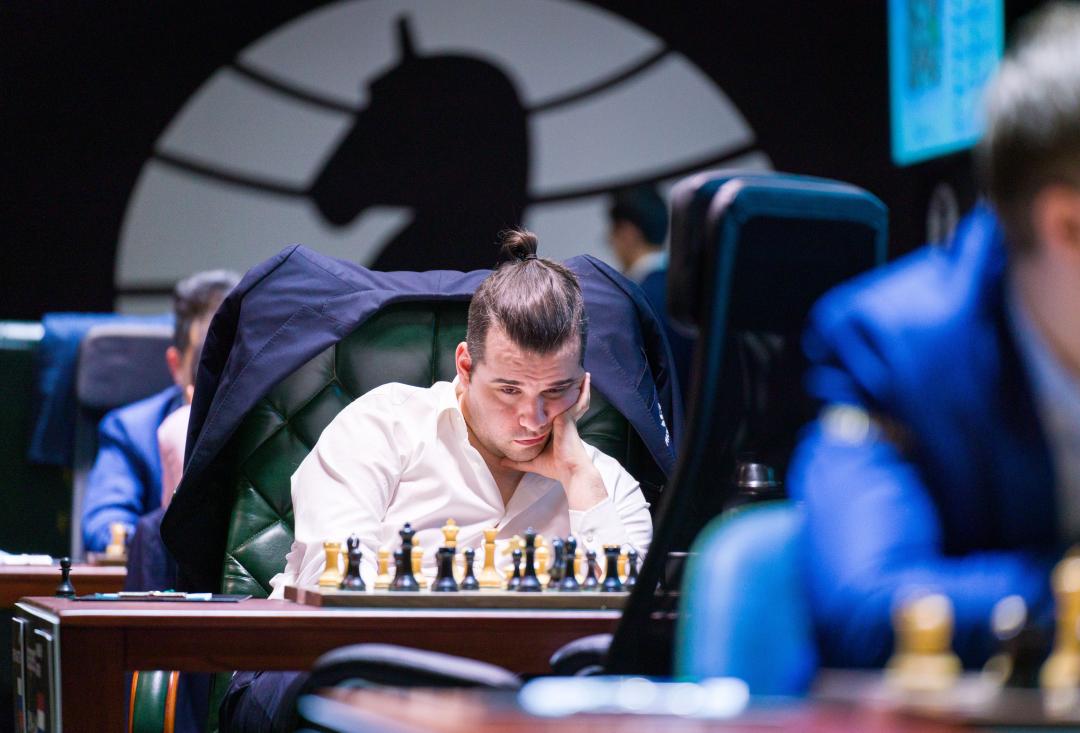 In that game, Nepomniachtchi as White was unable to find an edge against the Sveshnikov in the Sicilian, seeing Giri's bishop nestled on b3 become a thorn in the Russian’s position. A stubborn challenge by Nepo to force the piece from the board led to repetition after 28 moves. The half-point result maintains both players in the standings, with Giri still tied for third and one point off the leader’s pace.

The lower half of the standings received a shake up from round eight, with Russian stalwart GM Alexander Grischuk falling to countryman GM Kirill Alekseenko, the lowest-rated player in the Candidates who had earned his spot as the tournament wildcard. The two Russians played the second Poisoned Pawn game of the day, this time out of the French Defense, and dove into a complex middlegame that put both players’ notorious clock addictions on display. 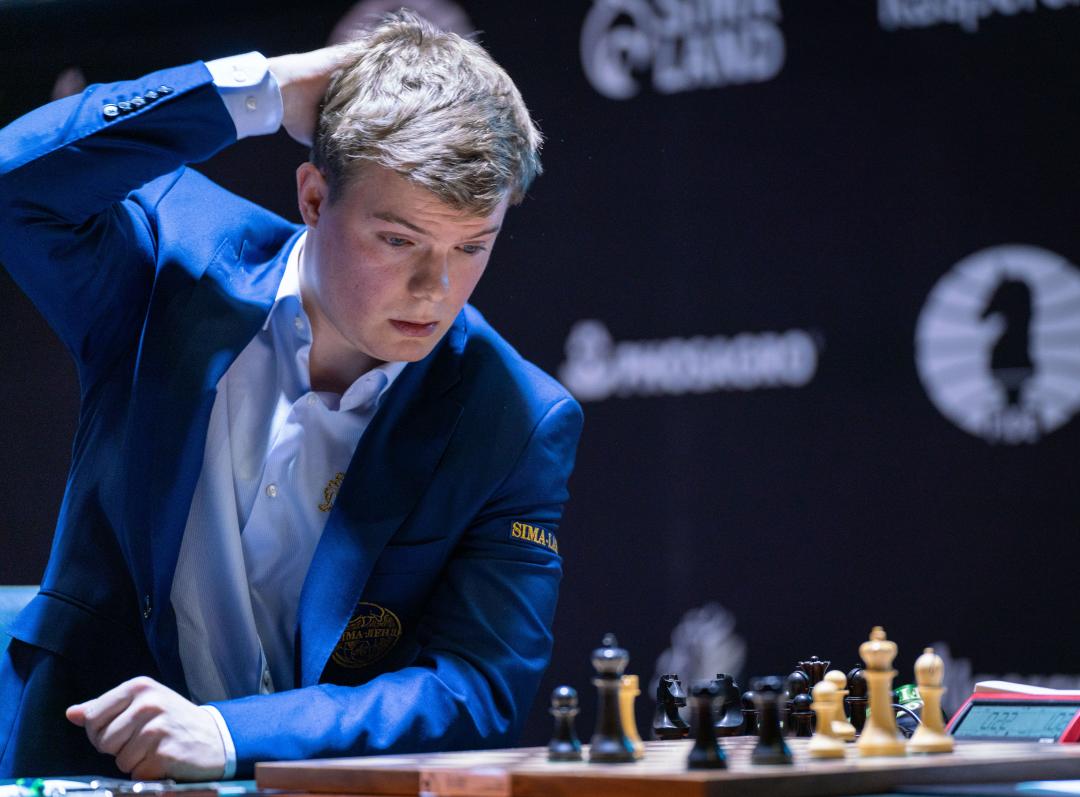 With the time control not achieved until the 40th move, the scramble was begun 10 moves earlier, during a tactically rich position that had Grischuk’s passer nestled deep into Alekseenko’s territory. With just two seconds left on his clock, Alekseenko bravely sacrificed an exchange with 36. Rxg7, dropping material to help remove the dangerous pawn and create a dangerous passed pawn of his own, which became the focus of the remaining game.

Both players were playing on the increment again five moves before the second time control, though this time Grischuk stumbled before he got there, finding his rook pair restrained on the back rank due to Alekseenko’s passer. Just before the final time bonus was added, 61. Rxa4 created a second passed pawn for White, ultimately too much for Grischuk to control.

In the fourth game of round eight, China GM Wang Hao and World No. 3 GM Ding Liren played quickly through a known drawing line in the Scotch. Wang Hao maintains his even pace in third place, tied with Giri at 4/8, though Ding Liren finds himself at the bottom with 3/8, after being leapfrogged by Alekseenko.

The Candidates Tournament continues with round nine on Tuesday, with first moves played at 7:00 a.m. eastern, with Caruana taking the Black pieces against Alekseenko. Grischuk takes White against Nepomniachtchi; Giri against Wang Hao; and Vachier-Lagrave has Black for the second round in a row against Ding Liren.

More information can be found on the FIDE Candidates Tournament official website.

"sole leader GM Ian Nepomniachtchi from Russia, who drew his eighth-round pairing against Dutch GM Anish Giri" ...then why doesn't your standings chart show this

Fixed. Thanks for letting us…

Fixed. Thanks for letting us know.