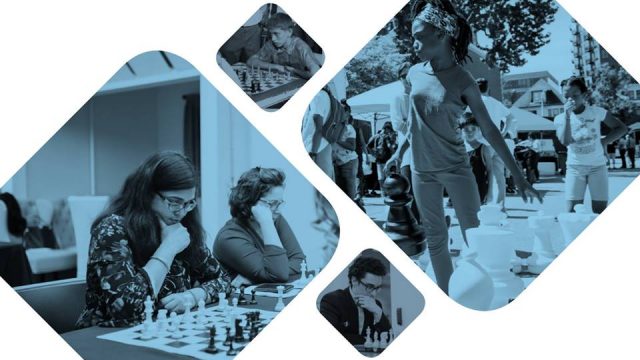 US Chess: 80 Years celebrates the US Chess Federation (US Chess), the official governing body of American chess, and its many accomplishments since its 1939 founding. The exhibition will include audio clips, video interviews, photographs and never-before-exhibited artifacts to remember the past and look towards the future as US Chess continues to promote the game to all through its mission to empower people, enrich lives and enhance communities through chess. “It’s an honor to recognize and reflect on the many contributions made by US Chess as we celebrate their important milestone,” says WCHOF Associate Curator Emily Allred, curator of the show. “It’s fascinating to see how the organization has evolved over its 80-year history and continues to thrive with the resurgence of American chess.” US Chess: 80 Years will also feature personal touches with penned remembrances by past editors and contributors to Chess Life, the official magazine published by US Chess; video interviews with commentators from the inaugural 2019 Cairns Cup, an elite tournament for the top female players from around the world, hosted by the Saint Louis Chess Club; and will debut an oral history project collaboration with the Chess Journalists of America. Video footage of Grandmaster Timur Gareev parachuting with a chess set from an airplane, as well as an endearing photo of Rachael Li—the top-rated eight-year-old player in the United States—cracking her knuckles before delivering defeat to former Baltimore Ravens football player and MIT mathematician John Urschel, provide something unexpected while promoting empowerment and inclusivity. “US Chess is a place for anyone, regardless of gender, national origin, age or special circumstances,” explains Carol Meyer, executive director of US Chess. “As a boundless, universal game, chess truly is a uniting enterprise for all.” Additionally, the show will connect visitors with the WCHOF’s new interactive World and U.S. Chess Halls of Fame in the same gallery, expanding on images of U.S. Chess Hall of Fame inductees including Bobby Fischer (1986), Frank Marshall (1986), Gisela Gresser (1992) and Herman Steiner (2010). Media interviews with the curator can be scheduled by contacting Brian Flowers at (314) 243-1571 or brian.flowers@worldchesshof.org.
About the World Chess Hall of Fame The World Chess Hall of Fame (WCHOF) is a 501(c)(3) nonprofit organization committed to building awareness of the cultural and artistic significance of chess. It opened on September 9, 2011, in the Central West End after moving from previous locations in New York; Washington, D.C.; and Florida. The WCHOF is located at 4652 Maryland Avenue, housed in an historic 15,900 square-foot residence-turned-business, featuring World Chess Hall of Fame inductees, United States Chess Hall of Fame inductees selected by the U.S. Chess Trust, displays of artifacts from the permanent collection and exhibitions highlighting the great players, historic games and rich cultural history of chess. The WCHOF partners with the Saint Louis Chess Club to provide innovative programming and outreach to local, national and international audiences.About the US Chess Federation The US Chess Federation (US Chess) is the official governing body and nonprofit 501(c)(3) organization for chess players and chess supporters in the United States. The mission of US Chess is to empower people, enrich lives and enhance communities through chess. US Chess’s vision is that chess is recognized as an essential tool that is inclusive, benefits education and rehabilitation and promotes recreation and friendly competition.US Chess represents the United States in the World Chess Federation (FIDE), connecting our members to chess players around the world. Founded in 1939 with the merger of the American Chess Federation and the National Chess Federation, US Chess has grown to serve over 93,000 members and 2,000 affiliated chess clubs and organizations today. Every year, US Chess sanctions and rates over 10,000 tournaments and over half a million games. We host over 25 National Championships and award titles to both amateurs and professionals, ranging from elementary school students to senior citizens. Connect with Us Learn more about the WCHOF online at www.WorldChessHOF.org. Engage with the @WorldChessHOF on Facebook, Instagram, Twitter and YouTube. Exhibition hashtag: #USChess80Years
SHARE: