How to Win a Match with 13 Rounds to Spare: Magnus Carlsen at the Showdown 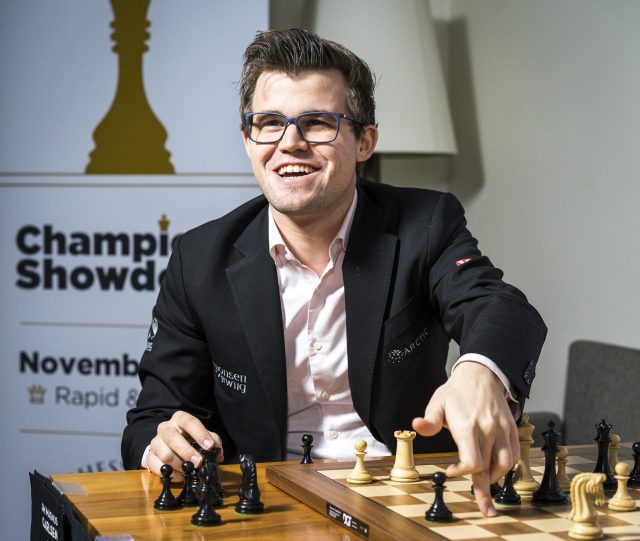 Unheard of Margin of Victory 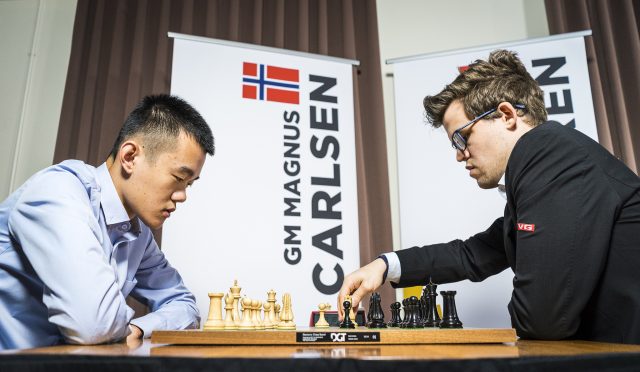 “I’m really looking forward to the faster time controls. It’s fun. It’s a challenge. There are no excuses. I mean, if you want to approach it like a game with increment and blame other people when you lose on time, I’m not going to have any sympathy for that. It adds another dimension, another challenge.” -Magnus Carlsen

Despite Carlsen's huge score advantage by the finish, the match was highly anticipated as Ding Liren is one of the one of the best players in the world, especially in blitz. Before the match, Ding was ranked #3 on the FIDE Blitz rankings, and he was even #1 on the list in July 2016, peaking at 2875. 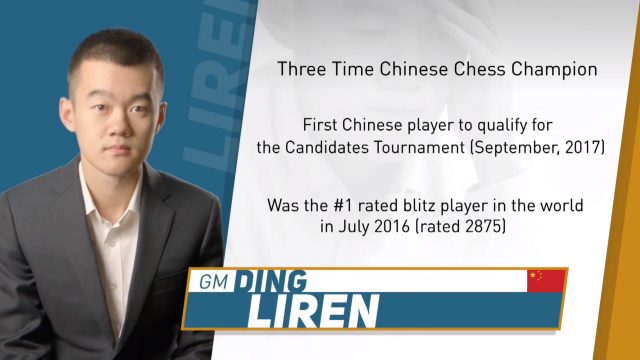 In fact, the very first game showed Ding's immense abilities. The two players reached endgame where Carlsen, playing white, had the good bishop while Ding's bishop was passively placed and blocked by his own pawns. Although the endgame seemed to ultimately be equal, commentators and watchers alike expected the typical Carlsen-esque grind, trying to turn tiny factors into an advantage. Instead, Ding Liren turned the tables:

“We were talking about Magnus trying to maybe being able to rustle up some possibilities in his game against Ding Liren. But, it is the Chinese genius who has come up with some ideas, saying maybe I’m the one playing for a little something in this position, not content to just sit there and play defense only. He's playing really ambitiously!” -Maurice Ashley, Showdown Commentator

At the critical moment, Ding overlooked a winning but tricky variation. Can you find it?

Show Solution Although Ding missed the win and the game was ultimately drawn, the game showed how tough an opponent Ding could potentially be. It is incredibly rare to see Carlsen struggle to draw an equal endgame.

Maurice Ashley: What do you think is going through Ding Liren's mind right now? Does he know that he missed the win?
Yasser Seirawan: Yes.
Maurice Ashley: What does he need to do to recuperate, just forget about the past---I know that's what we have to do as professionals---and really play his game, not go outside of himself? What are the odds he's going to be able to pull that off?
Yasser Seirawan: Well, it's the cup half full/half empty. You could walk away from it that game saying, I'm such an idiot... oh man, I blew it. I had my chance. I should've won. And you can have that attitude.
Or, you have have the other attitude that says, "I'm in good form. I was black in game one. Magnus thought he had the pressure. I turned it around on him. I outplayed him. I slipped, fair enough. But, hey, I was the one in control. So, it all depends on your attitude.

Carlsen seemed become more determined by his near victory, cleanly outplaying Ding the following game and winning with black. In the 20 minute time control, although the games were hard-fought, Carlsen won three games and drew the other three, preventing Ding from scoring a single victory.

Show Solution It took Ding three days before he scored his first win. Starting Day 3 with a powerful victory, Ding used his attacking pressure to gain an extra pawn and confidently converted his advantage in the ending. However, Carlsen was able to immediately neutralize it by winning the very next game, showing once again his incredible ability to become more determined in the face of a disappointing result. This began a four game winning streak for the World Champion. Ding's confidence seemed completely shaken, struggling under the time pressure and committing blunders. Carlsen's overwhelming lead made the final result a forgone conclusion, and he clinched the match with an entire day to spare. https://twitter.com/saychess1/status/930217317551738880 Carlsen's overwhelming match victory even landed a new record for the highest live blitz rating ever at 2974. 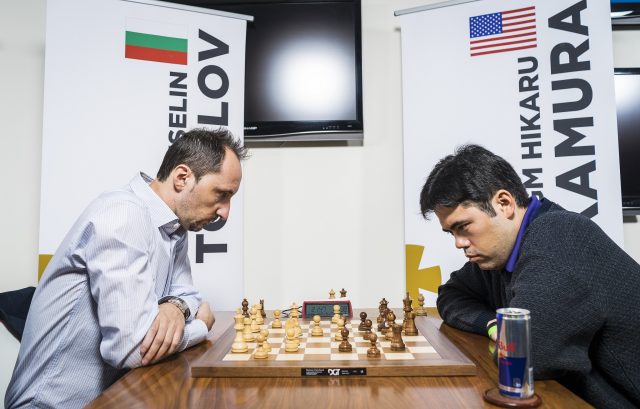 "These two have really been the showstoppers, the stars of this entire competition. Every time we watch them, our eyes are transfixed at the electrifying play because neither one backs down." -GM Maurice Ashley

Although Nakamura led consistently and won the match with 9 rounds to spare, this match-up produced some of the most interesting games, including imaginative attacks and tactics. In fact, the first 4 games of the 10 minute time control were all decisive---in Black's favor!

Show Solution https://twitter.com/STLChessClub/status/929101747905277953 This game (Day 3, Round 3) is very representative of the double-edged chess that Topalov and Nakamura played throughout the event.

"That is one of the earmarks of people who end up becoming grandmasters: the ability to bounce back from devastating defeats." -GM Maurice Ashley 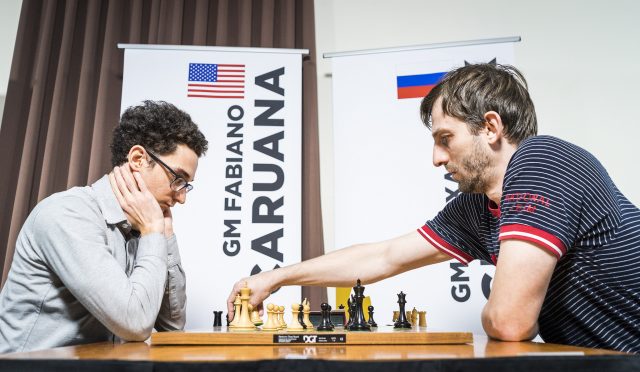 Photo: Lennart Ootes
Caruana and Grischuk seemed to be the most evenly matched at these time controls, and their match was the most up in the air throughout. At the halfway point, Caruana trailed, but only by one extra loss (in a 20 minute game worth 4 points). On day 3, Grischuk started to extend his lead, but in the second half, Caruana won three games in a row, neutralizing all of Grischuk's gain.

"When he didn't put me away in that game yesterday where he was just crushing from the opening and had more time, I managed to actually win that game. After, the tides just turned." -Fabiano Caruana

On the final day, Caruana extended his streak to 6 points out of 7 games (5 wins and 2 draws), completely evening the score. In this 26 move victory, Caruana creates a crushing attack seemingly out of nowhere. The 5 minute blitz segment was where Caruana excelled the most, winning 6 games while losing only once---highly impressive against a player like Grischuk, a three-time World Blitz Champion. Caruana clinched the match with one round to spare. He also gained 78 blitz rating points, reaching the live blitz top 10. 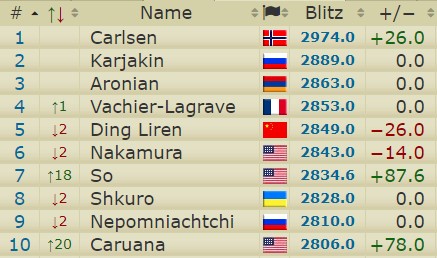 
Wesley So vs. Leinier Dominguez Perez 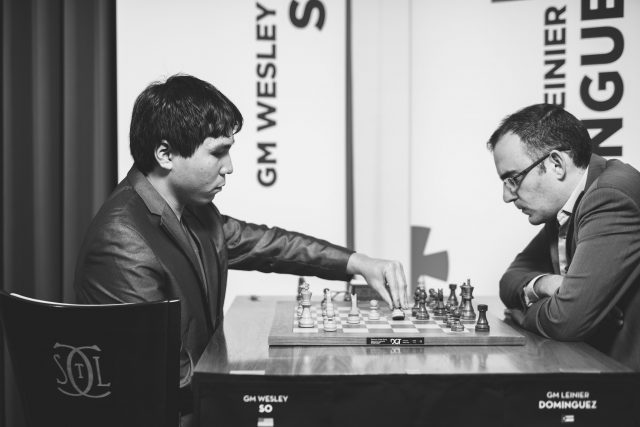 Photo: Lennart Ootes
Exceeding expectations, former World Blitz Champion Leinier Dominguez, showed how much he excels at fast time controls, holding a commanding lead for a majority of the match. In fact, at one point, Dominguez led by an entire 16 points. On Day 3 in the later half of the 10 minute games, Wesley So showed why he's one of the top 10 players in the world, managing to fight on despite the huge gap in score.

In Game 6, the tables began to turn. In a double-edged position with his king uncastled, So tactically took advantage of Dominguez's weaknesses and emerged with a winning position from thin air.

Leinier Dominguez Perez vs. Wesley So

Show Solution This victory sparked a five game in a row winning streak for So. With the momentum completely in his favor, So soon took the lead in the match, and Dominquez was not able to recover. On the final day, So scored 7 wins while losing just two games. Wesley's performance gained him 87 blitz rating points, making him #7 in live rankings. 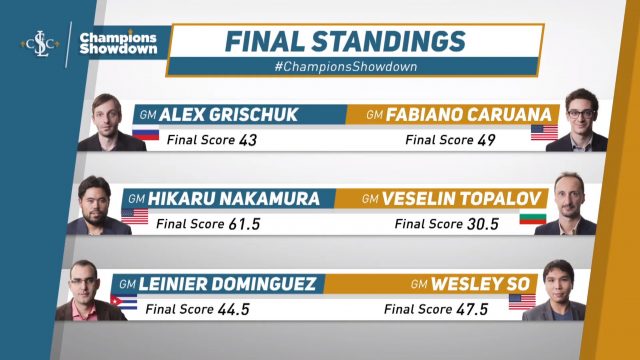 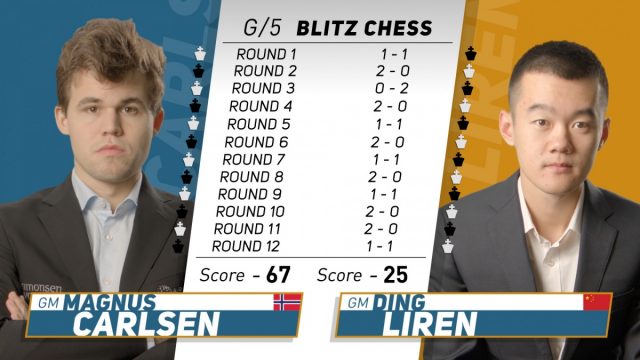 Want to relive the excitement? Visit the "Best of Champions Showdown" on Twitter, our collection of the most compelling, entertaining, and downright hilarious tweets from the event. https://twitter.com/USChess/status/930454244771078144 For additional information on the 2017 Champions Showdown, visit the Official Website.