Webster U. Ties Itself for First Place at the Pan-Ams 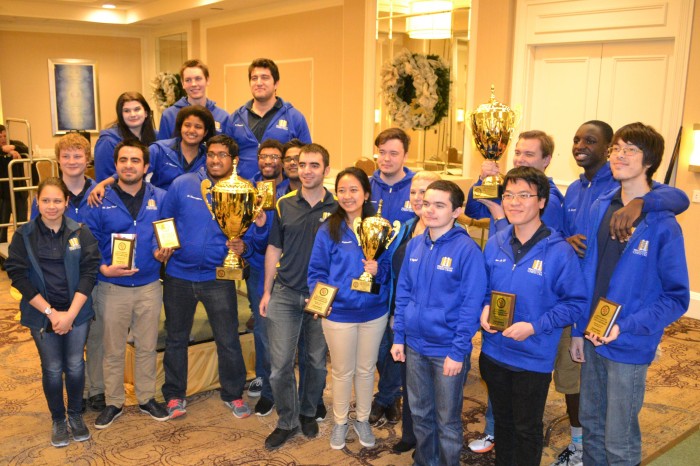 Webster University’s teams dominated the Pan-Ams: 1st, 2nd, and a tie for 3rd
It’s true that St. Louis U. is the new super-squad on the block in the Gateway City. But neighboring Webster University made it clear this week that GM Susan Polgar’s protégés are still the Big Dogs In Charge. (“Big Gorlocks” just doesn’t seem to pack the same punch.)  In fact, you could say the St. Louis suburban school made its superiority doubly clear. At the New Orleans Pan-Ams, a 10-hour bus ride down river for Webster, its “B” and “A” teams finished one-two, the only two squads to score 5½  in the six-round Swiss. Webster-C even added a mike-drop clincher, joining the 5-0 score group to tie for third! (Ultimately, they were fifth on tie-breaks.) Perhaps you’re asking yourself: If Webster is so dominant, who then nicked both their top teams for half a point? Think Superman against Spiderman. Webster-A and Webster-B didn’t lose that half point to another college. It took a fifth-round showdown between the two same-school lineups to do that. And Webster A v. Webster B was a genuine battle. (Pan-Am rules forbid “package deal” draws or any other pre-arranged results.) It took a creative win by GM Ray Robson in the last game going in the matchup to even the score for the A-squad. 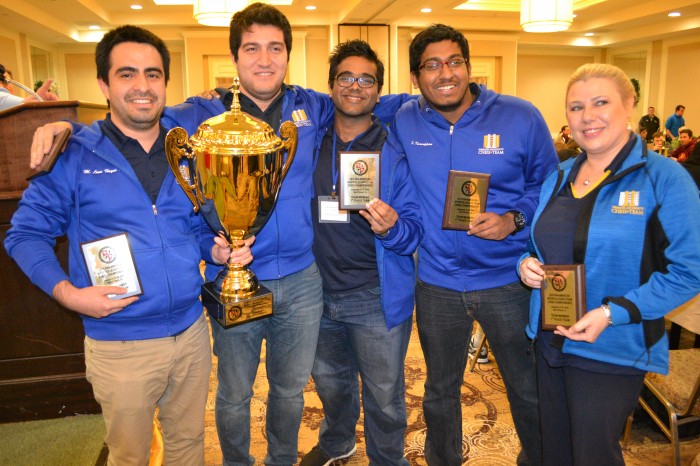 Webster-B, with Head Coach GM Susan Polgar, earned the 1st-place Pan-Ams trophy
“It is all about team work!” GM Polgar said. “We trained as a team, traveled as a team, dined as a team, fought as a team, and won as a team! … Because our students respect our formidable rivals such as UTRGV, UTD, TTU, SLU, and UMBC, etc., they trained extra hard this year. Hard work and discipline does pay off!” 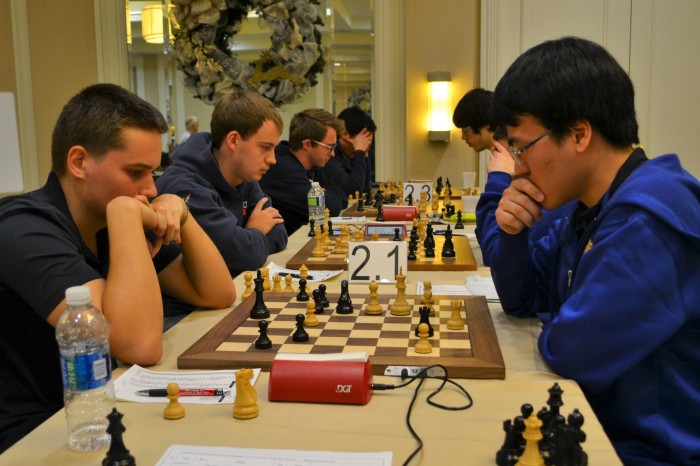 The Pan-Ams are open four-player teams with up to two alternates from colleges in North America, Central America, South America, and the Caribbean. The top four placing US schools go on to the Final Four of College Chess, this year to be held at New York City’s historic Marshall Club on March 25-26. The Final Four determines the US college championship. Schools can qualify for only one spot but then can send a team to the playoff made up of any of their students.

It’s understandable that the powerhouse scholarship programs of chess want desperately to validate their universities’ very substantial investments in the sport of chess by bringing home the big brass cups. Winning the Pan-Ams deserves a bonfire homecoming. But frankly, making the Final Four lets a head coach—after his four-day stress test—exhale and break into a broad smile. In good old American sports-speak, it’s “making the playoffs.” It seems that every year the road to the playoffs gets steeper. At this year’s Pan-Ams, there were six powerhouse scholarship teams and many a dark horse. And dark horses, non-scholarship programs like Illinois, Columbia and NYU, have a history of taking a spot. The Pan-Ams, after all, are a Swiss, and a pairing can sometimes make a door a bit easier to open—or feel like a brick wall. 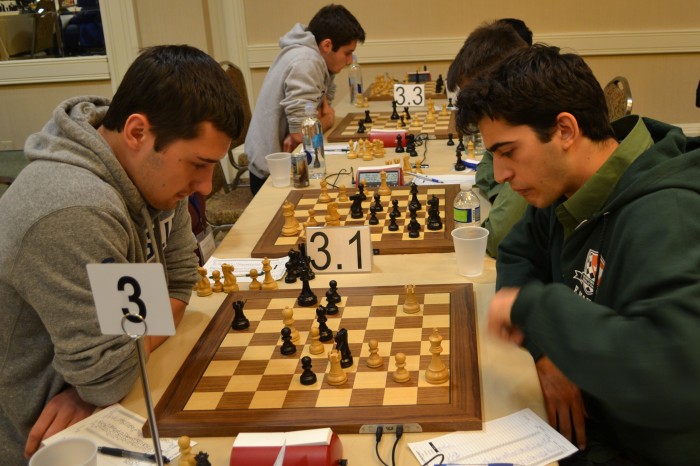 More round 6 stress. Saint Louis University’s GM Dariousz Swiercz versus UTD-C’s IM Eylon Nakar. SLU won 3-1, but UTD-C still finished in a respectable 9th place
GM Alejandro Ramirez, head coach at SLU’s brand-new scholarship program, another project of chess benefactor and SLU alumnus Rex Sinquefield, deserves recognition for bringing together a first-year squad, led by GM Dariusz Swiercz (USCF 2738),  that finished third on tie-breaks and qualified for the Final Four. The Billikens (did St. Louis colleges come late for the assignment of understandable mascots?) lost only to Webster-B, in round four, and then by the narrowest margin, 1½ - 2½. Texas Tech-A finished fourth on tie-breaks. also with a 5-1 score, losing only a squeaker to Webster-A in round four. “We've had a well-balanced team,” Head Coach and former US Champ GM Alex Onischuk said. “Even though all our players did moderately well, and each of them lost one game—we qualified quite convincingly.” University of Texas-Dallas-A are 10-time Pan-Ams champions. UT-D brought six GMs and six IMs in all. With a draw against Columbia-A in round three and a loss to Webster-A in round six for a final score of 4.5, UT-D secured the last spot in the 2017 Final Four. “When you are not one of the top four seeds at the Pan-Am,” UT-D Program Director James Stallings said, “it means you have your work cut out for you. The UT-Dallas win in Round 5 over the number-2 seed UT-Rio Grande Valley was crucial to our qualifying for the Final Four.” The University of Toronto, the first school ever to win three straight Pan-Ams championships (1980-1982) took international honors with the only other 4½ -1½ score.

Two of the traditional superstars didn’t make the cut. GM Bartek Macieja’s University of Texas-Rio Grande Valley, a continuation of UT-Brownsville’s championship program, came in eighth with their best squad. University of Maryland-Baltimore County-A finished in 10th place in the 4-2 score group, along with some strong non-scholarship programs: Chicago, Pittsburgh, Illinois Urbana-Champaign, and Columbia universities. A very strong University of Michigan-A team, with an average rating of over 2400 and led by IM Atulya Shetty, were paired against three top teams to put them at 17th, at the top of the 3½  score group.

Board beasts and individual bests

Earning the best score for your board position at a 60-team Pan-Ams is a lifetime achievement. GM Tanguy Ringoir of UMBC-A won Board One honors. GM Andrey Stukopin of UT-RGV earned the Board Two plaque. IM Rao Prasanna Raghuram of UTD-C was the star on Board 3. Being on the winning team while earning the best board performance means you were a monster. Manuel Leon Hoyos, of first-place Webster-B, is one of the friendliest GMs on the planet. But he was a beast at the board. He took both Best on Board Four and Top Individual standing with a 5½ score. We must certainly also recognize University of Central Florida’s Gabriel Pita for the biggest individual upset, defeating an opponent rated 1241 points higher.

Division and other winners 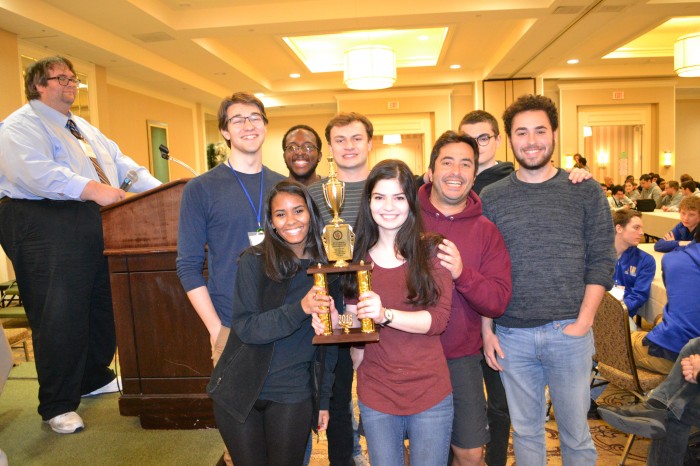 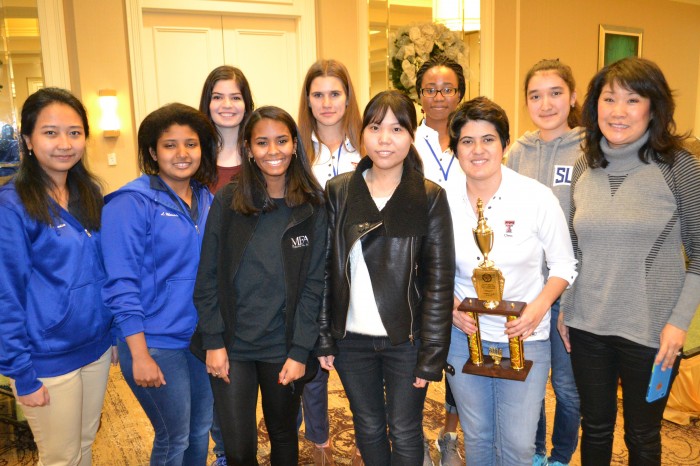 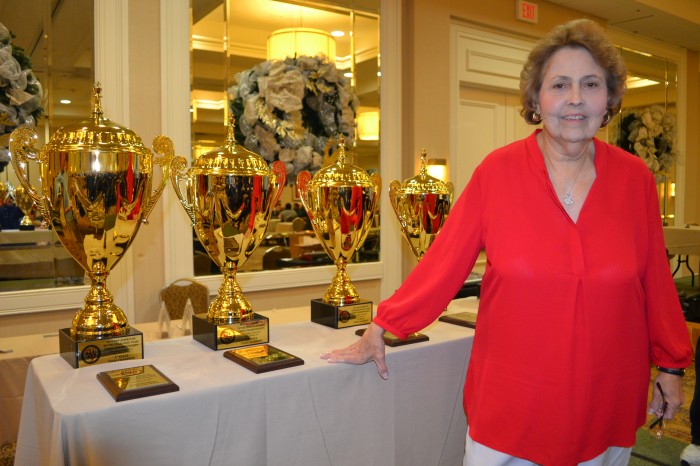 Chief Organizer Jean Troendle prepares to award gorgeous trophies to the top five teams. Cajun Chess gave away a lot more hardware to other winners as well.
Not enough can be said about Chief Organizer Jean Troendle of Cajun Chess and her crew, who handled a last-minute registration surge and a 30-year turnout high with expertise and aplomb. Their 63rd version of the Pan-Ams was superb, from the Dixeland-band and Cajun-food reception to the well-organized and dignified awards ceremony before a packed room. Our thanks to Chief Arbiter Korey Kormick, Assistant Chief Arbiter Allen Priest, Assistant Arbiter Thomas Priest, New Orleans Open Chief TD Bob Ballard, Assistant TDs Doug Southon, Ken Ferguson, and staffers Rex Williams and Dan Johnson. Look for news on the Final Four during the March 25-26. And if you’re in college, plan on getting a team together for the 2017 Pan-Ams in Columbus, December 27-30, hosted by Ohio State University.  Join this year’s teams in being part of collegiate history. For more information, check out earlier reports by Al Lawrence and the official standings:
SHARE:

Since the B Team finished as the best team from their school , they should be in the final 4 instead of being replaced by the A team simply because of ratings and a loophole in the rules. Also, it would be better not to cap a school's chances at 1 for the final four - I would simply have the 4 best teams in there regardless of what their school's other teams have done.
It is just silly to have multiple teams from the same school in the tournament. Why not have an A division, B division, and C division? Or, increase the number of boards per team to 6? Or both?
[…] GM Alejandro Ramirez is ranked 5th in this year’s field. He recently led the Saint Louis University team to a spot in the Final Four of College Chess […]
[…] Look for our college related articles on US Chess, including a piece on the 2016 Pan-Ams by Al Lawrence. […]
[…] of Texas at Dallas compete for the increasingly competitive title. Check out rosters below, and Al Lawrence’s article on the Pan-Ams, which qualified the four finalists. GM Alexander Onischuk recently contributed a piece for US Chess […]