Team USA is the winner of the 2020 World Senior Team 50+ Division after the event was cancelled after the seventh round in light of the global COVID-19 (coronavirus) pandemic. 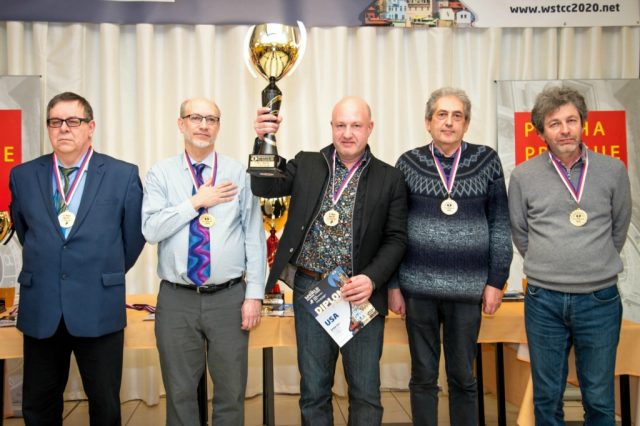 Team USA at 2020 World Senior Teams (photo Jagr)
“USA 1” brings home the 50+ team gold, with the German club team “Lasker Schachstiftung GK” and “Czech Republic 1” winning the silver and bronze respectively. Russia struck gold in the 65+ Division, with France winning the silver and the German club team “Schachfreude Leipzig” taking the bronze. This is the third consecutive victory for a US entry in the 50+ division, and congratulations are in order to team members Alex Shabalov (captain), Gregory Kaidanov, Joel Benjamin, Igor Novikov, and Alex Yermolinsky, who joined the team as a replacement for Larry Christiansen. Still, the victory will perhaps be remembered less for the stellar play of the Americans than for the abrupt end to the event, one forced by increased social distancing policies enforced by the Czech government as the pandemic grows. The first such decree came before the fifth round, when the field was split into groups of no more than 100 players. When permitted group sizes were shrunk to 30, FIDE and the local organizers decided to abandon the tournament after the seventh round. 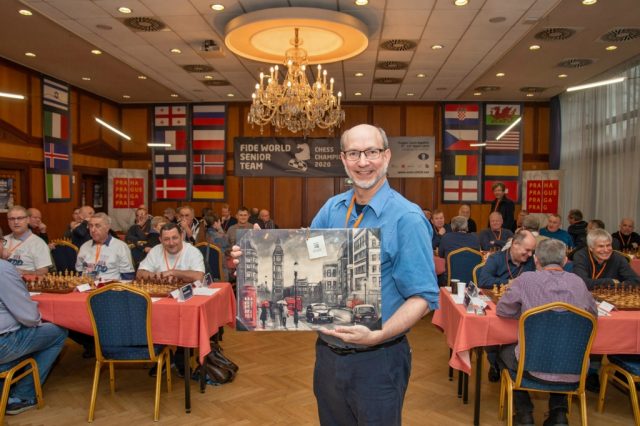 Joel Benjamin at 2020 WST (photo Jagr)
Joel Benjamin (who celebrated his birthday on Wednesday) sent a final note from Prague after the round ended.

It’s a crazy time for the boys in Prague.  Yesterday I played on my birthday, historically very bad news for me.  But I managed not to lose, and almost won.

Here Benjamin is referring to his round six game with Felix Levin, played as part of the drawn round six match with eventual silver medalist Lasker Schachstiftung GK. Igor Novikov was the hero of the round, winning an interesting rook ending against Jacob Meister to save the draw for the team.

Bailing out with a drawn match kept us in the lead, one match point ahead of Czech1 and Iceland. But life was about to get weird! At 2:30 in the morning I received a panicked call from my wife telling me I had to arrange a new ticket to come home right away.  Only later did we learn that American citizens will be allowed to fly home after Friday, but we still have a lot of obstacles to overcome, some seemingly unfolding every hour. We got to the hall to find that round seven would be the last.  Enough is enough.  We noticed the Czechs making a quick 2-2 tie with Yamal, so we went for four draws in our match to clinch the gold.  With all the madness going on, I suppose a lot of players had no appetite to play. We were the only USA team to finish.  The Four Brothers had already gone home due to a family emergency.  USA Too hightailed it out of Prague as soon as Trump made his announcement.  We are not sure exactly what is awaiting us.  I don’t mind being tested and kept in self isolation... I just want to get home.

US Chess wishes all of our players safe and speedy travels home to our shores.
SHARE: