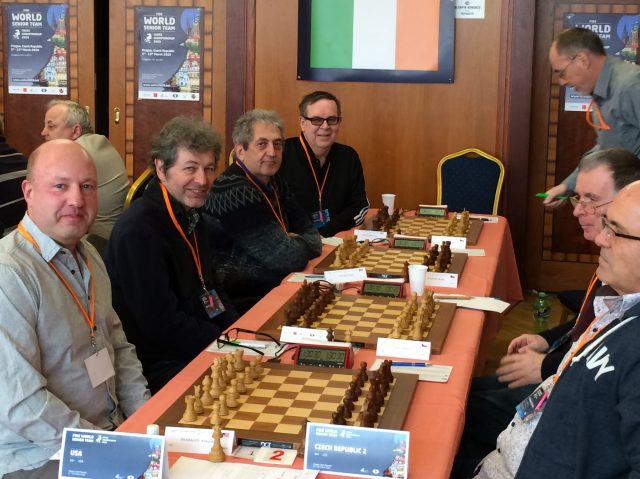 USA 1 vs Czech Republic 2
GM Alex Shabalov won on top board to win the match, defeating  IM Vitezslav Priehoda, while GM Igor Novikov took down IM Jaroslav Polasek. Last minute substitute GM Alex Yermolinsky drew relatively quickly with FM Zbynek Vrbata on board four, and GM Gregory Kaidanov was the last to finish, converting a significant advantage against IM Pavel Zpevak. The usually aggressive Shabalov showed his maturity in his win over Priehoda, playing his trademark g2-g4 push only after preparing it with h2-h3! Joel Benjamin sent this update in the middle of Round 3.

We started the tournament with a no handshake policy, politely informing our opponents before the round.  Unfortunately, this approach did not accomplish much because our solid start meant accepting a lot of resignations, and none of us wanted to leave our esteemed opponents hanging when they put their hands out (knocking kings over...that's only in Searching for Bobby Fischer). We won our first two rounds comfortably, 4-0 and 3.5-0.5 respectively.  In the second round I played the daughter of a former world champion and a candidate in her own right.  [My teammates filled me in on the Russian chess history.]  It's a game that didn't feel good at the time and turned out even worse after the engine weighed in.

Well, you know...jetlag.  I'm resting for the third round, where my teammates are locked in a tight struggle with Czech 2.  It's like a Bruce Lee movie; you have to dispatch the secondary fighters before they send the A team after you.  We have one game drawn and three good positions.  It's not a done deal that we win any of them as I'm writing, but I like our chances. It's interesting that I haven't noticed anyone displaying symptoms of a cold.  It may be that people who were already sick stayed home.  In any case, people are pretty calm here.  Maybe because the local currency is called "koruna." 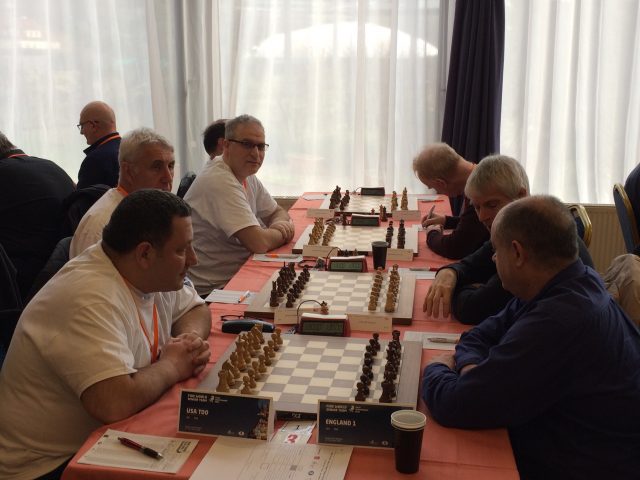 USA Too vs England 1
First board Sokolin shows the power of the bishops in the endgame in his Round 2 win. “USA 4 Brothers” defeated “Oslo Schakselskap” in Round 3 by a score of 2.5-1.5, with wins by FM Krishan Jhunjhnuwala and Naresh Jhunjhnuwala leading the way to victory.   The team won in Round 1 by a score of 3-1 over “TJ Zdar Nad Sazavou,” and lost in Round 2 by the same score to “1960-61.” Quick Links: World Senior Teams website Pairings and Results Live Games 50+ Live Games 65+
SHARE: