Who says chess is an individual sport? If you’ve ever played in any of the U.S. Amateur Team tournaments, you know how fulfilling it is to win a game that secures your team victory. The U.S. Chess League is team chess at its best: the top players in the country compete on a weekly basis for an entire season. Thirty-nine grandmasters, including U.S. #3 and World #10, Wesley So, and many up-and-coming players formed teams for most of the major cities in the country. In the end, St. Louis, the National Chess Capital, and Manhattan, an epicenter of chess for many decades, battled it out in the final.

The pivotal game of the Championship match was the upset victory of Expert Akira Nakada (MAN) against National Master Nicholas Rosenthal (STL).

With this game, a victory by NM Levy Rozman, and a draw by GM Zviad Izoria, the Manhattan Applesauce became the 2015 US Chess League Champions. Here was the team's full line-up for the season, including four prominent grandmasters. 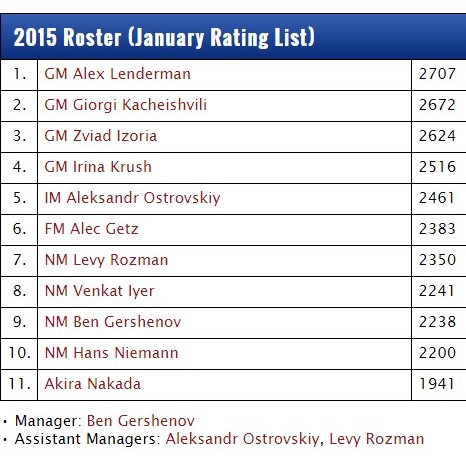 Additionally, the US Chess League regularly recognizes the best games of its players. A panel of highly-ranked judges share their thoughts and vote for the Game of the Week.

Try out these tactical puzzles from some of the best games of the season.

IM Jake Kleiman (1st Place, 5 Points): Izzy gets my nomination for Game of the Week. I’ve never seen a tactic with the exact motif of the position after the very simple but cool looking 19. Nc6. Izoria played the game well from start to finish and showed creativity along the way. FM Jason Doss (2nd Place, 4 Points): Stonewall players everywhere rejoiced with this game. Ok, it wasn’t a Stonewall, but close enough. Maybe this idea of g6-f5 gives Black a few too many weaknesses to deal with in a practical situation. Perhaps a similar idea with Ne8 and f6 would have kept the e-file and the pesky e5 square from becoming so problematic. Izoria does an excellent job pouncing on the swiss-cheese nature of Black’s position. GM Robert Hess (4th Place, 2 Points): To me, the only cool moment of the game was 19. Nc6!, a great tactical shot. White’s Knight is completely en prise, but neither Black Knight can capture it without losing material. Before and after this move, though, the game was a cakewalk. Izoria easily gained space and a superior position, and the much lower rated Brattain couldn’t keep up with the 2013 runner-up for USCL MVP.

FM Elliott Liu achieved an unprecedented 10 victories out of 10 games this year, earning the Board Three All-Star spot. How did he begin an overwhelming attack?

Game of the Week Judges’ Panel: GM Josh Friedel (1st Place, 5 Points): Elliott seems to be unbeatable in USCL this year. This week he turned in another very high quality game. His opponent’s suspicious opening play led to a promising position for White, but it still wasn’t clear how to punish Black. First he found the idea of 17. b4! and exploiting the weak c5 square. I really liked the 24. Nxe5 sacrifice as well, which led to a position which was horribly difficult for Black to play. He also finished with great accuracy, finding 34. Qf6+ followed by Rd6 and Ne6. Just a nice game. FM Konstantin Kavutskiy (2nd Place, 4 Points): Just another smooth game by Elliott, who was simply on fire this season. Black’s opening was strategically very risky, and Elliott played logically to punish his opponent, who held on for quite a bit. 24. Nxe5! was a nice sacrifice, which lesser players may have shied away from as it doesn’t immediately lead to checkmate, but rather a slow-burning, winning attack. Kudos. FM Mike Klein (3rd Place, 3 Points): Did you know that the 1869 Cincinnati Red Stockings were a perfect 65-0? Another piece of bar trivia you’ll need to remember someday is of course Liu’s perfect run in 2015. Who cares that Black’s pieces were asleep while his King took an Ambien and sleepwalked around the Kingside? You cannot rank Liu’s capstone game to his magical season any lower than third.

What endgame tactic did GM Akobian use to get an edge?

FM Jason Doss (1st Place, 3 Points): I really liked this game a lot. Akobian makes a nice positional Pawn sac that keeps constant pressure on Li’s position. White’s pieces were practically anemic while they desperately tried to hold the Pawn. Practically speaking an excellent decision – it would be extremely difficult in a game-time situation to deal with Black’s constant probing and piece activity. FM Eugene Yanayt (1st Place, 3 Points): Very impressive performance by Var, winning smoothly with Black with perfect play. I especially liked the 26… Rxf2 and 27… Rc8 idea. IM Jake Kleiman (2nd Place, 2 Points): Earlier in the USCL we saw Black get crushed in this line. However, Akobian was able to achieve dynamic imbalance of two Bishops vs Knight + Bishop + Pawn and did a very nice job of outplaying his opponent.
Stay tuned for the results for the 2015 Game of the Year. For all games and standings, visit the US Chess League Official Website.
SHARE: