Young female players explain the powerful impact of chess in their lives and the challenges they’ve faced in the game.

CROSSVILLE, TN:  The US Chess Federation is proud to share the 3.5-minute video Girls"> in Chess by Jenny Schweitzer, a New York-based director. In this inspiring film, young female chess players explain the emotional and intellectual impact of chess in their lives and the challenges they’ve faced in the game.

The New Yorker’s website hosted a highly-visible premier on August 8th  and included a personal essay by Schweitzer depicting her daughters’ experiences. Schweitzer wrote, “Even at their young ages, the female chess players in my video are keenly aware of being stereotyped. And their ability to articulate their frustration is startling. When I asked them what a chess player most needs, they didn’t talk about strategic thinking or rules of the game; they mentioned determination and the ability to face a challenge without being intimidated.”

The number of girls in US Chess are trending upward in overall percentage, excellence, and absolute numbers. Despite the uptick, girls are still outnumbered—only one in five players in National Scholastic tournaments are female in what should be a gender-neutral pursuit.  The US Chess Women initiative aims to bring female membership to 50%, with a short-term goal of 25%. Currently, the number is 14%, up from 10% nine years ago. Progress is being made, but it can be more dramatic. 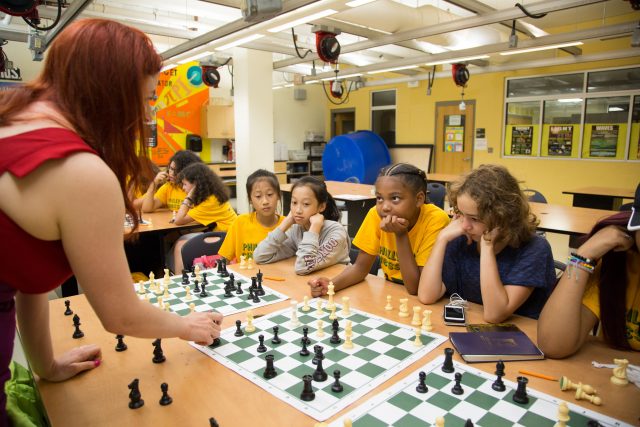 Cerena, who is featured in the video saying, “Chess is like life for me,” plays against Jen Shahade, chess champion, executive producer of the video and US Chess Women liaison. Photo Credit: Rachel Utain-Evans

Presented by the Kasparov Chess Foundation (KCF), Renaissance Knights Chess Foundation, and US Chess, Girls in Chess was filmed at the 2018 KCF All-Girls Nationals in Chicago, Illinois.  We welcome embedding and sharing this ">YouTube link to further the US Chess educational mission of “Empowering people through chess, one move at a time.”

US Chess is building upon the video’s momentum to attract more girls to the game via our US Chess Women initiative, which includes hosting girls’ clubs at mixed-gender tournaments, celebrating female accomplishment in the game in our print and digital publications, and setting up networks for girls and women.

Upon seeing the video, Chelsea Clinton tweeted, “We must continue to encourage girls of all ages to pursue their passions, including chess.”