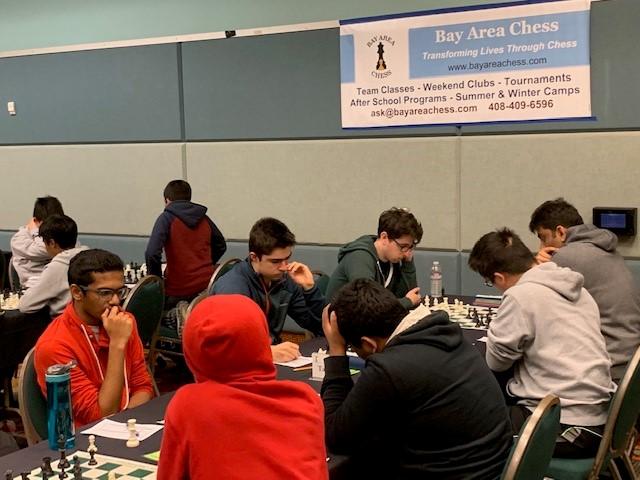 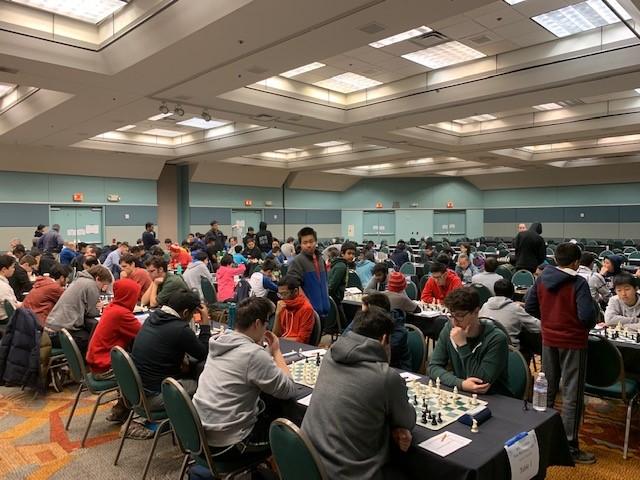 The U. S. Amateur Team West Championship is underway in Santa Clara, California, directly across the street from Levi’s Stadium, home of the San Francisco 49ers. Though football season is over, there was more than enough high drama in round 1 of this tournament, which currently features 33 teams to start the 3-day section, and at least 31 more teams set to join tomorrow for the 2-day. The shocker of the opening round went to Shaashwath Sivakumar (1956) of team Czech mate b4Ne1, who pulled off a huge upset against IM Kostya Kavutskiy (2471) in a game that was finished after about 2 hours and caused alarm for the rest of the team. Kostya’s team BAC-1 was the #2 seed in the tournament with a strong lineup consisting of Kavutskiy, FM Rayan Taghizadeh (2390), Vinesh Ravuri (2242) and Daniel Kou (1673). After BAC-1 secured wins from their boards 2 and 3, only Kou’s game kept the result in doubt. With Kou down a piece on board 4 in his game, he battled back and complicated the position to go up the exchange and finish with a victory, securing the point for his team with a 3-1 result. The top seed of day 1, Oldies but Goodies, also got into a dogfight with their opponents BAC-2. Oldies but Goodies got points on boards 1 and 4, but lost board 2. Board 3 was among the final games to finish in the round, and after 5 hours, Eric Honer (1764) pulled out a king and pawn endgame win against Paulo Santanna (2058) to draw the match at 2-2. The big team story of the round has to go to Northwest University Chess Eagles, headed by Benjamin Mukumbya (2021), whose life was portrayed in Disney’s Queen of Katwe. With a team average of 1317, they defeated Hopkins Hawks, who had a team average of 1908. After round 2, we have 6 teams with 2/2, and the fight will continue today as those teams meet each other and the 2-day section get ready to do battle. We will have a full report of today’s action, as teams begin to separate themselves from the pack in pursuit of the championship. Full team results and standings can be found by following this link: www.bayareachess.com/live/usatw The scholastic side event was also on the opening day of the US Amateur Team West. With 36 teams, and a total of 147 players, the room was packed with excited kids. The tournament had 5 rounds, with the usual G/30; d5 time control, and the team average could not been over 1200.00. Three major organizations/schools were fielding multiple teams: Fallon Middle School and Bright Chess Club both bringing 7 teams, and BayArea Chess bringing 5 teams, and the domination of these teams was very visible. Many other clubs brought one or two teams, and the event was overall a fun and exciting opportunity for kids to build camaraderie. First place finisher with 4.5 team points, the Titans from Kennedy High School, dominated all rounds, winning their first four and only drawing in the last round against #2 San Luis Obispo Chess Club, who finished with 4.0. Finishing also with 4.0 were two others teams, creating a 3-way tie for second place: the Sacramento Scholastic Chess League team, with an impressive lineup and Fallon’s strongest team. Tiebreaks have given SSCL the overall third place, while Fallon finished 4th place. Under 900, Under 600 and Under 300 special class prices were given out to BACC+ICC, K-8: Fallon Zebras and Fallon Stallions. Special categories included All girls team, which the Berkeley Dragons took by fielding their 5-girls team for this event, and honorable mention also goes to Bright Knight team, who were forming an all-unrated team, and finished 22nd place, by drawing their first two rounds against much harder opponents. For final results for the scholastic side event, visit http://bayareachess.com/live/usatwkids/ The U.S. Amateur Team East is currently underway in Parsippany, while the North is being held in Schaumburg, Illinois. Look for reports on all three, and read about the South, which occurred last weekend, here. Use the hashtag #USATChess to join the conversation on twitter.
SHARE: