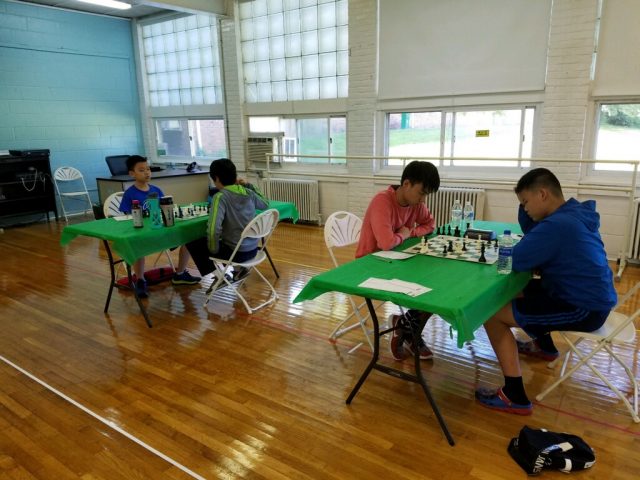 The Chessanity Masters Invitational (left to right): Liran Zhou vs. Max Lu and Wesley Wang vs. Vincent Tsay (not pictured: Kassa Korley and Michael Rohde). Photo: Rosanna Prestia
Since early 2014, as Warren and Wesley Wang progressed to master-level and beyond, the brothers have also been teaching chess weekly during the school year. Ambitiously, Warren and Wesley founded www.Chessanity.org,  and their parents Winston Wang and Mingdi Yang helped them organize numerous professional and scholastic tournaments, nurturing their playing skills and giving back to the community. Now Warren is a freshman at The Wharton School, University of Pennsylvania, and Wesley, currently a more active tournament player than his brother, is a freshman at Jericho High School.
Contemporaneously, Paris, Frankie, and Sebastian Prestia, a number of years younger than the Wang brothers, began appearing in several newspaper and magazine articles as well as television news, due to their exploits in converging on the expert and master ranks. The Prestia brothers started www.ChessLI.org along with their parents Frank and Rosanna Prestia with the goal of promoting chess education and camaraderie by referring people to all of the Long Island organizations and events. Having worked with the Prestia family and having participated in a number of Chessanity events, I was familiar with the chess resurgence which both families were bringing to central Long Island. As it happened, however, the Wang family and the Prestia family did not run into each other at all during the 2017-2018 school year.
This past summer, Wesley had been invited to Kasparov’s Young Stars Camp in St. Louis.  And the Prestias attended Greg Shahade’s US Chess School, where Jennifer Shahade was also teaching, as the boys wanted to see the world famous Chess Center and Hall of Fame.  Thus, when Winston Wang and Frank Prestia, Sr. bumped into each other at the Parkway Hotel in St. Louis, they were both startled, but they both realized that something had to change. At that moment, it was determined that Chessanity and ChessLI would join forces. The immediate result of that was the September 16 Chessanity event at East Woods School in Oyster Bay, New York (rounds 1-2 of the master section of the event were played at the Wang family home on September 15). The Prestias are newly attending East Woods School and lending their expertise to the expanding chess program there under the direction of Principal Laura Kang, herself a chess-player. The long-term result of the Wang / Prestia collaboration will include monthly events already calendared at East Woods (the next event is October 14) with the potential for a new dedicated chess site on nearby commercial property in the near future. 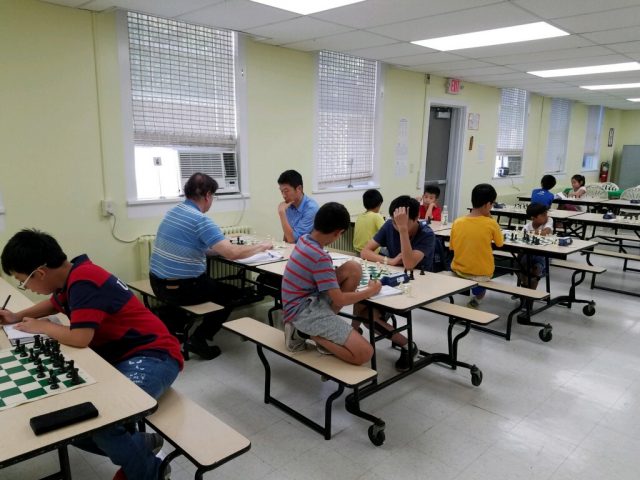 The September Chessanity event had 5 sections: Master, Premier, Classic, Booster and Beginner. The Master section was a 6-player invitational featuring me, Kassa Korley, Wesley Wang, Vincent Tsay, Liran Zhou and Max Lu. I took the early lead with wins against Liran Zhou in round 1 and Wesley Wang in round 2. My game against the very talented Zhou was a typically tense Sicilian Defense battle.

Kassa Korley was nicked for a draw in round 1 by Vincent Tsay, but Kassa advanced in round 2 to 1.5/2, so I faced him in round 3 in a clear contest to be the front-runner in the event. Korley obtained some pressure against me, plus a time advantage in the g/90 + 30 sec. increment battle which lasted into the endgame. When I finally seemed to reach a convincing equality, however, his pressure paid off, and I blundered a pawn with no real chance to recover, and so Korley took a half-point lead in the event. In the concluding 4th round, I got nothing against the excellently prepared Vincent Tsay, but Wesley Wang was playing in a good aggressive style and putting Korley through the ringer. Kassa hung on for the draw in that game and emerged in first place in the event. I ended up in a tie for 2nd with Liran Zhou.

In the Premier Section, Frankie Prestia turned in an excellent performance, posting a perfect 3-0. A number of other strong young players competed in the Premier section, including some from the City who had roots on Long Island. Paris Prestia chose not to play and instead volunteered as an assistant to the directors for both the Master and Premier events. And Sebastian Prestia instead selected the Westfield, New Jersey, Chess Club Quads, convincing his dad to dutifully drive him all the way there for that event.

While many New York area masters are aware of the strong Chessanity tournaments, less well-known is the teaching tradition at Chessanity, which has included such talented students as Zhou and Ellen Wang. Another notable volunteer at the September event was Evelyn Zhu, while chess parents Rosanna Prestia, Ming Zhang, and Mingdi Yang also were on hand to make sure everything ran smoothly, and regular Chessanity volunteer Hanson Lu also provided support. Between games, a lively free-form soccer game formed in the school's gym. Overall, I noticed a great deal of enthusiasm from players, and parents, all enthused about the prospects for even greater success for chess on Long Island.