There were three recent Continental Chess Association tournaments held on three consecutive weekends in three different states and three enterprising players from three different cities joined forces and attended them all.  The Manhattan Open was held at the Hotel Pennsylvania across from Madison Square Gardens from July 29-31st.  The following week at the Stamford, Connecticut  Sheraton the Northeast Open was held from August 5-7th.  Finally, the Cleveland Open was at the Cleveland Airport Marriott Hotel from August 12th-14th.  At a distance of just over 500 miles apart, you wouldn’t expect too many players to hit all these stops. The first player in the trio is not all that surprising.  IM Jay Bonin is a professional player and hits multiple stops on the CCA circuit.  He also gave lectures at two of the three tournaments.  Jay cashed at two of the three tournaments.  Jay lives in New York City area so the Manhattan Open was a home game for him, but after the Northeast Open went on the road. I was the second attendee at the three tournaments, though obviously I did not play in any.  I was the Chief TD at the Northeast Open and Cleveland Open and the Chief Assistant at the Manhattan Open.  I live in Atlanta and drove to New York, Connecticut, Ohio and then back to Georgia for this trip. The third player may be a bit lesser known but has now become a regular attendee at CCA events.  Harold Scott of Jamestown, NY has recently retired and now travels the chess circuit, sometimes joining forces with his fiancée Erika McLean and forming a solid mixed doubles team.  While Harold, did not cash at any of the three tournaments, he played the following nice game at the Northeast Open. Between the Northeast Open and Cleveland Open, Harold and Erika hosted Jay and myself at their home in Jamestown, New York for a few days.  Jamestown is in Northwest, New York about 1 hour east of Buffalo.  On one of our free days we took in a tour of Niagara Falls. 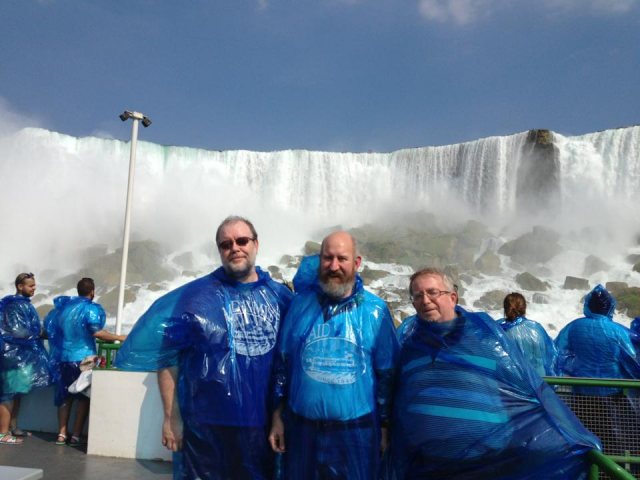 Jamestown is also the childhood home of Lucille Ball.  Her gravesite is only a couple minutes from Harold’s house, so we had to take in that local tourist attraction. 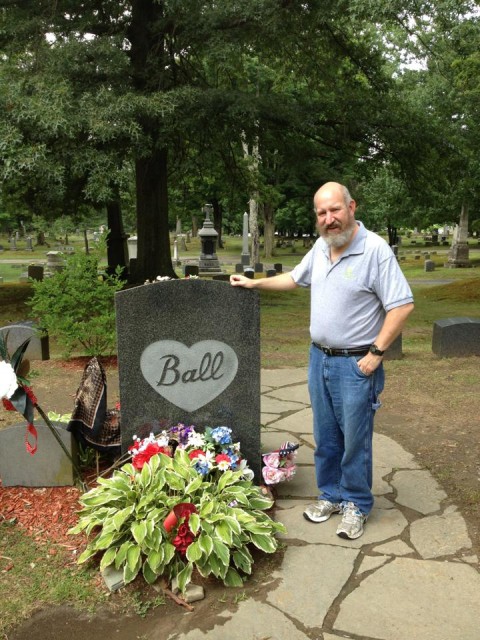 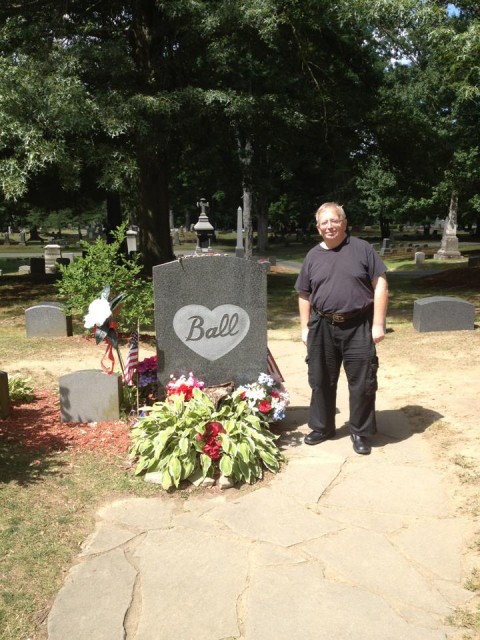 Jay Bonin
The main attraction though has to be the three tournaments.  First up is the Manhattan Open.  Since it was held in NYC, it was the largest and strongest of the three tournaments.  The $20,000 prize fund was enough to attract 461 players in four sections including nine GMs in the Open section.  When all was send and done the 9 GMs placed in the top 9 spots!  GM Julio Sadorra was the top winner. He scored 4 ½ and took clear first and $2100.  He defeated IM Alexander Ostovskiy in round 3, GM Tamaz Gelashvili in round 4 and drew GM Zviad Izoria in the final round.  In the last round, Sadorra was ½ point ahead of the field.  Board 2 drew quickly and all Sadorra had to do was draw for clear first place.  Izoria had other plans in mind and the game was a hard fought draw.  Sadorra was actually better in the final position and could have tried to win, but since the draw secured clear first, he did not press. Seven GMs tied for 2nd to 8th.  GMs Izoria, Alexander Strupinsky, Robert Hess, Alejandro Ramirez, Sergey Kudrin, Niaz Murshed, and Michael Rohde all finished at 4-1.  Because of the large number of players in the tie, each won only $285.71.  Murshed finished with 4 wins and 1 loss while all the others finished with 3 wins and two draws.  Alejandro Ramirez had an interesting victory along the way.  He had 8 seconds left on his clock (with 10 second delay).  He was trying to win a rook and bishop vs rook ending.  His  opponent had a couple minutes on his clock and was defending very well.  Neither player was keeping score. Had his opponent asked for a move count and 50 move rule, the game would have ended in a draw.  However, he did not do so and eventually got mated in time pressure. GM Tamaz Gelashvili was the only GM to finish out of the money, but he started out 3-0.  On Sunday, he lost to GM Murshed in round 4 and played a quick draw in the last round with GM Ramirez. His 3 ½ point tied for 9th-10th with Joseph Zeltsen, an expert who played up and clear first Under 2400 taking home $600.  Here is Zeltsan’s last round win over NM Jonathan Subveri. The 3 point score group had a number of interesting developments.  Those that were Under 2400 split the second Under 2400 prize.  Bonin was among that group losing only to GMs Robert Hess and Michael Rohde. FM Nicolas Checa scored 3-2 and did not win a prize, but he played 3 GMs and gained valuable experience which paid off handsomely the following week. FM Alisa Melekhina also scored 3 points.  She had a very interesting position in round 3 against Nicholas Vettesse who was also in this tie.   Melekhina has had a decisive advantage for much of the game.  She is winning here.  What is the best move?

Here is a nice tactic also from the open section.  White attacks black’s queen.  What is the decisive move?

The section winners were:

The next tournament was the 21st Northeast Open.  The tournament drew 193 players in 4 sections including two GMs, two IMs, and three FMs.  There was a clear winner also with 4 ½ points, but it was not one of the GMs or even one of the IMs.  FM Nicolas Checa scored 4 ½ - ½ and won clear first place of $1200.  Checa played both GMs beating Kudrin and drawing Murshed in the last round.  Checa’s win against Kudrin is especially instructive as he demonstrates fine technique in a problem like ending. Since I am featuring games of the other two players in the Odyssey, I should feature a TD story or two from my weekend.  The Northeast Open nearly had a forfeit free weekend.  In a major tournament this is incredibly difficult as it is easy for the TD to make a mistake and miss a withdraw or a half point bye and then there is of course players giving late (or no notice) and not showing up.  I did my part this weekend and had no forfeits going into the last round.  Unfortunately, a player overslept after taking a nap and missed round 5 and was the only forfeit of the tournament!  My other humorous event was a dead drawn game in the under 2100 section.  The players are not keeping score.  I started counting and got to about 45 and then of course there was a pawn move.  I started counting again.  I got to move 72 and was getting ready to apply the 75 move rule when on move 72 another pawn is moved!  I started counting again and got to move 30 when the players FINALLY agreed to a draw.  All in a weekend’s work! Tying for second-third in the tournament was GM Murshed and IM Igor Khmelnitsky both at 4-1.  They drew each other and each also each drew the last round – Murshed against Checa and Khmelnitsky vs NM Ian Harris.  Here is Murshed’s round 3 victory over NM Lev Paciorkowski. The section winners were:

The last tournament in the series was the Cleveland Open.  There were 202 players in four sections.  The $15,000 prize fund was enough to attract one GM and three IMs.  This time the GM won everything in sight.  GM Fidel Corrales Jimenez went 5-0 in the open section to take the $2000 first prize and the $100 first place bonus.  This result was somewhat surprising because Fidel was on board 1 the last round with black against IM Ron Burnett and they were both one point ahead of the field.  I expected a quick draw.   Fidel had other plans though.  Here is his last round victory over Burnett. Not content to just win the main event, Jimenez also entered the blitz tournament.  He lamented the fact that his slow play was hampering his blitz game and causing him to lose on time!  Still, he scored 6 ½ which although is a low score was good enough to tie for first with Joshua Posthuma and win $93.75.    Finally, Jimenez 5 points coupled with his partner’s two points was enough to tie for first in the mixed doubles category and add another $300 to his winnings.  All in all, a nice weekend for the GM! As mentioned, Bonin tied for second.  He finished 4-1 and tied for 2nd with IM Ron Burnett and NMs  John Hughes and Rithwik Mathur.   Here is Bonin’s last round win versus NM David Allen. The section winners were:

Full details for each tournament, including many games, can be seen at www.manhattanopen.com, www.northeastopen.com and www.clevelandopen.com . Previous Continental Chess tournaments can be found at the Continental Chess website at  http://www.chesstour.com/cross.html.
SHARE: