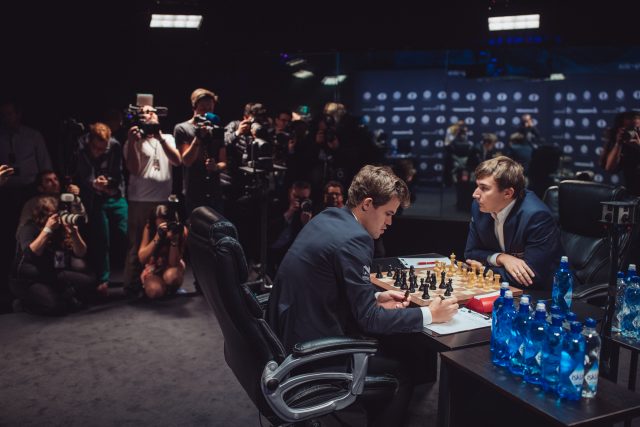 Round 9 at the World Chess Championships, Photo Max Avdeev
I arrived in New York on the exact day the Shakespearian tragedy happened (round 8), and I was hoping not to witness another one today (my return ticket is on the 30th). Luckily, my first day as journalist at the 2016 World Chess Championship was dramatic but still left me with hope for a tight match. After a shocking round 8 and a fairly hectic aftermath, with Carlsen not attending the press conference, the players met once again across the World Championship board for round 9. And what a threat they gave the spectators. Karjakin returned to his pet 1.e4, and as expected Carlsen did not deviate from the Ruy Lopez, as he had no problems equalizing in previous games. The surprise came when Carlsen chose the fairly forced Archangelsk Variation an opening that has not received much attention, especially at top level, in recent years. In general Black sacrifices a pawn in order to shatter white’s pawn structure and gain some important dark squares around his opponent’s king. White gets the bishop pair and the material advantage, if he manages to stabilize his position then the game will be played for two results only, a white win or a draw. Karjakin was no stranger to this opening and his previous results were extremely solid in this line, a lot of specialists have expressed their indignation towards Carlsen’s camp and his team’s choice for this crucial stage in the match. As the moves went by, Carlsen was slowly getting outplayed. Everybody that I talked to could feel the pressure that the Champion was facing, and the Challenger was playing brilliantly. Karjakin’s position was dominant, but the break was still longing far away. Karjakin slipped with 33.Qc2 to which Carlsen had only one move to balance the game and force a draw, unfortunately for him his trademark precision has been nowhere to be found throughout the match and he once again erred, giving white a long lasting advantage. Karjakin pressed and seemed like he is on his way to victory, the tension was rising at the venue, and everybody was eager to find the answer: Will Magnus crack? Karjakin failed to see a deep move in a very dangerous line, and after spending his last 20 minutes on the clock he decided to go for a forced line that allowed the Champion to escape and live to see another day. Tomorrow is Carlsen’s 2nd to last white, and his match strategy has surely changed in the past 48 hours. Will he be able to drift from his usual play and go for a sharper opening to try and create imbalances and outplay his solid opponent in them? Will he continue with his dry approach and try to squeeze water from stone. The first strategy could basically end the match tomorrow if he misplays it, the first one did not give any results throughout the whole match. The spectators are in for a treat no matter what. Carlsen is not the type of player to give up, Karjakin has proved all match that he is not a player to step away from a challenge. Happy Thanksgiving and look for news on tomorrow's game after your turkey and pie.
SHARE: