While American families were enjoying Thanksgiving yesterday, four talented chess players on Team USA were duking it out with Argentina in round six of the first ever online FIDE Chess Olympiad for People with Disabilities, organized by the International Chess Federation (FIDE). They won the round, and today achieved their dream — to finish within the top ten teams in the world. Final rankings can be found here.

The Olympiad, which began on November 21, brings together 400 players from 45 countries, in 61 teams. The Swiss stage ended on November 27; the semifinals and finals continue through December 2 with a closing ceremony on December 3. The players of Team USA hail from across the country and range in age from nine to 46 years old. The disabilities they contend with include quadrilateral phocomelia (four short limbs), epilepsy, autism, blindness, and muscular spinal atrophy.

Ranked 39th going into the tournament, Team USA defeated Brazil on November 27, winning the seventh round and tying for 10th in the Olympiad. Their goal had been to make it to the top ten.

The story of Team USA this year is a story of reaching for seemingly impossible dreams. Coached by National Master Lior Lapid, who runs PALS Chess Academy in Denver, Colorado, the team defied the odds from the start, winning all of their games in the practice round.

“Each of the amazing players on Team USA is a champion, a role model for everyone overcoming challenges and following their dreams against the odds, especially during these difficult times when so many people are struggling with the pandemic,” said coach Lapid. “They played brilliantly, far exceeding all expectations of our team going into this Olympiad.”

Playing higher rated teams in every round of the Olympiad, including three top-10 teams, Team USA began the tournament with a draw against Russia 2 (ranked 9th), followed by a loss to Philippines 1 (ranked 3rd). They rebounded strongly, defeating Romania 2 in the third round, and scoring a resounding 3.5-0.5 victory over North Macedonia (ranked 10th) in the fourth round. After losing to Chile in round five, Team USA came back in round six with an impressive 3-1 victory over Argentina and finished strong with a 3-1 victory over Brazil in the seventh and final round.

They achieved this success in spite of the fact that their second board player, Griffin McDonnell, 16, was having up to four seizures a day, sometimes during games. Even while facing this enormous physical and mental challenge, Griffin delivered wins in four critical rounds for Team USA.

“The resilience of the players, their refusal to give up and their determination to rebound from losses and from seemingly lost positions is incredible,” Lapid said. “We hope that our team’s success will inspire people of all backgrounds to explore and pursue the beautiful game of chess.”

As part of an effort to share their story, Team USA is collaborating on a documentary about their journey through the Olympiad, made by filmmakers Manuela Marcovici and Ilana Lapid. Because of the Coronavirus pandemic, the filmmakers are filming the documentary over Zoom, enlisting the help of the players and families to document their lives during the tournament.

“There were many firsts involved in this experience,” said Lapid. “This was the first Olympiad of its kind, and because of COVID-19 it was played online, which was also a first. We hope to have the opportunity to compete in person next year at the next Olympiad for People with Disabilities in Khanty-Mansiysk, Russia.”

On Board 1 for Team USA was Michael Aigner, 46, a National Master. Hailing from northern California, Aigner was born with quadrilateral phocomelia. Aigner drives a powered wheelchair while actively participating in the top division at chess tournaments. A second place finish at the 2006 US Open in Chicago earned him an invitation to the 2007 US Championship in Oklahoma. Aigner, who holds a master’s degree in Mechanical Engineering from Stanford, has two decades of experience coaching private students, over a dozen of whom have progressed to Master level themselves. His work as a chess player and coach has been featured in the New York Times. 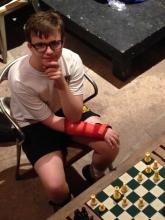 Griffin McConnell, 16, playing Board 2, hails from Golden, CO. Diagnosed with epilepsy at age 5, he had his first brain surgery at 7, and a functional left hemispherectomy brain surgery at age 8.  He had to relearn how to walk, talk and live with permanent disabilities. McConnell deals with daily chronic cluster headaches, migraines, speech disorders, right sided blindness, and epilepsy.  None of this has prevented him from being successful in chess. McConnell is a former Colorado State Scholastic Chess Champion and was invited to compete in the First Confederation Cup for People with Disabilities in 2019. Traveling to Ankara, Turkey, to represent the Americas, he was recognized with the award of Best Player of the tournament. McConnell also loves performing and starred in a production of Chicago in 2019, produced by Phamaly Theatre Company. 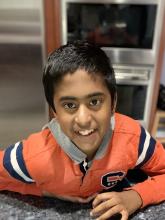 On Board 3 of Team USA was Pranav Shankar, a 13-year-old avid chess player from New Jersey. Born in India and diagnosed with Autism Spectrum Disorder as a young child, Shankar’s passions are math, chess, and piano. He qualified for the High School Math League National Championship in May 2020 and has performed piano recitals at the Merkin Hall, Baruch Hall and Columbia University in New York City. He was a National Winner at the National Guild Piano Auditions in 2020. Shankar’s most successful chess tournament was the NJ Open in 2018 where he won top U2000 rated player, in the Open section. Shankar also likes to learn different languages. In his free time, he loves scrolling through Wikipedia to learn new things and play "Among Us" with his sister. 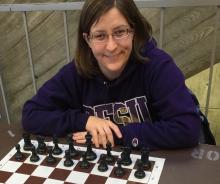 On Board 4 was Jessica Lauser, 40, hailing from Northern California, though currently residing in Western Missouri, where she works as a federal employee. An avid participant of tournament chess, Lauser is the 3-time, reigning U.S. Blind Champion, the only woman to have earned this distinction. Lauser has played over 250 rated tournaments throughout the country, and has qualified to represent the U.S. in numerous international events, including team-based World Blind Olympiads and individual IBCA (International Braille Chess Association) World Championships. Legally-blind since birth, Lauser has found, in chess, a means to attain equality and success, even while contending with lifelong vision-loss. Lauser’s goal is to become the first woman in the U.S., having always experienced blindness, to attain the rating of National Master, hopefully inspiring others along the way.  Holding dual degrees in History and Russian, Lauser hopes to pursue advanced education and a career in the language.

On Board 5 was first alternate for Team USA, Oskar Zoffer, a 6th grader from Newton, Massachusetts. Having learned chess from his father at age 8, Zoffer, now 11, has won many trophies in Massachusetts tournaments, including a gold medal with his team at the 2019 Massachusetts Winter Team Challenge. Diagnosed with Spinal Muscular Atrophy type 2, Zoffer doesn’t let his disability stop him, and dreams of becoming a chess grandmaster, an astrophysicist, and a musician. Following in the footsteps of his parents, both professional musicians, Zoffer’s love of singing classical, jazz, and pop tunes, has delighted many an audience. Zoffer has studied voice and played electric drums and melodica in jazz ensembles at the New England Conservatory of Music Preparatory School for the past three years.  During the 2020 pandemic, Zoffer made one of his dreams come true by creating his own YouTube channel, "Chess and Music with Oskie Z." 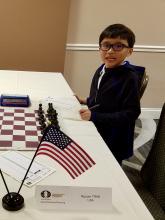 On Board 6 was Nguyen Tran, hailing from Lake Charles, Louisiana. At nine years old, he was the youngest player in the world to qualify for the Olympiad. Tran has a physical disability with a semi-paralyzed left leg, and he exercises on a special bicycle each day to strengthen his legs. He and his twin brother started playing chess at age 5 and spend an hour or two every day practicing chess. Tran loves math, science and building lego structures. He is also a blue belt in karate. His current favorite book series is The Diary of a Wimpy Kid. He loves homemade waffles for breakfast.

National Master Lior Lapid served as captain and coach of Team USA.  A four-time Colorado State Champion and two-time National Champion in the K-9 and K-12 divisions, Lapid founded and has run PALS Chess Academy in Denver since 2012.  He has appeared in Chess Life and several other publications, most recently being featured as one of the “15 Under 40” in the Intermountain Jewish News.  Lapid has coached dozens of former or reigning scholastic state champions in New Mexico and Colorado, as well as former National Blitz Champions in the K-6 Team Division.  In 2019, Lior was appointed captain of Team Americas at the 1st FIDE Confederation Cup for People with Disabilities, where his student Griffin McConnell won top honors for the best game and best overall result in the tournament. A passionate teacher with an extensive theater background, Lapid incorporates humor and inspirational storytelling into his roles as captain and coach of teams/players of all ages.

Team members and family contributed to this article.

Mazal Tov, Lior. I am amazed…

Mazal Tov, Lior. I am amazed at your wonderful, gifted students and at your talent to make it all happen.
You must be so proud of them as your parents and sisters are proud of you.
Much success and many blessings in the future.
Monika Kimball

Spectacular! What a gift to…

Spectacular! What a gift to society. Thank you. Looking forward to meeting you.

All of us at the Denver…

All of us at the Denver Chess Club are real proud of Griffin McConnell and Team USA.

We will feature some of the games in our lessons this week in hopes to inspire our students to play their very best!

Team USA players and coach are an inspiration to all people. You make the impossible happen. We are so proud of you!
Shaya Kelter