Super-Grandmaster Tactics at the Sinquefield Cup

Test how well you've been following the Sinquefield Cup with a mid-tournament tactics quiz. 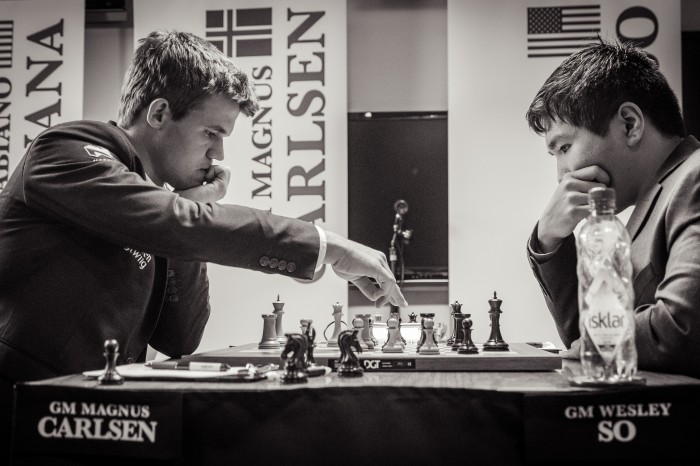 Carlsen vs. So, Photo Grand Chess Tour
In the most recent rounds of the Sinquefield Cup, two new leaders have emerged: Levon Aronian and Magnus Carlsen. Aronian found his way to the top of the scoreboard by winning two beautiful attacking games against Caruana and So. Carlsen, on the other hand, had a shaky start with a first round loss to Topalov, but has since recovered and managed three and half points out of the last four games. Here's a look at some of the tactical combinations from the exciting first round of the tournament, which had the rare result of all decisive games between these top-level grandmasters.

18...e4! When your opponent's king is uncastled, open up the center. 19.dxe4 Bxe4! White can't defend all of the weaknesses in his position. 20. Nxe4 Bxa1 and Black went on to convert his material advantage into a win.

Caruana just played 36...Nd6, attacking Aronian's rook. How did one of the current tournament leaders respond?

How did Giri turn his better placed pieces into a material advantage?

Anand just made a mistake with 36...Nb8. How did Nakamura gain the upper hand against the former world champion?