Strongest Pan-Ams Ever Start in Cleveland 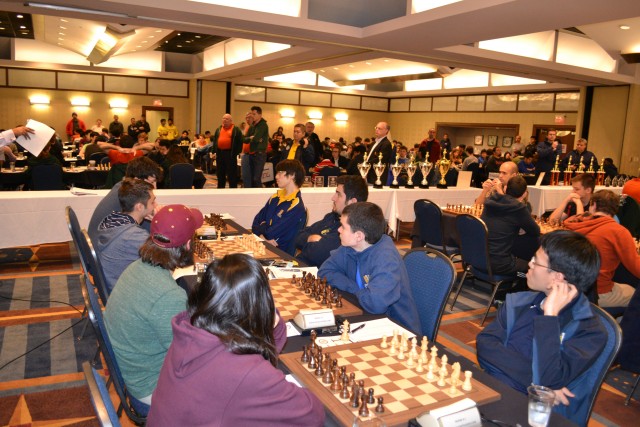 Slogging through flight-grounding weather the day after Christmas has become as much a college chess tradition as the Buckeye marching band’s gridiron ritual of dotting the “i” in Ohio. Indeed, getting to the Pan-American Intercollegiate Team Chess Championships has been the opening battle since 1946, sometimes requiring a knight’s tour of re-bookings and last-minute car rentals to reach the right square—in this year’s case, the Sheraton Airport hotel in Cleveland, Ohio. Even this winter’s unwelcome trifecta of tornadoes, flooding and record snowstorms around the country didn’t keep a single one of the 42 pre-registered college teams from making their first moves right on time—and making the event the most powerful ever, with more than one-third of the entries titled players. The 185 players fighting for their schools in the premier open college championship in the Americas and the Caribbean include 25 GMs, 4 WGMs, a dozen IMs, and more than 30 other masters. Forty-two teams from 27 different colleges and universities compete for overall and division honors. Traditional powerhouses, with even higher average ratings than they brought to battle last year, lead the event after two rounds. Webster University of St. Louis, winner and national champion since the inception of its program three years ago, tops the chart with a US Chess Federation team rating of 2747. Texas Tech, another past national champ, weighs in at 2657. Ten-time PanAms winner UT-Dallas is next at 2632, and the newly named UT-Rio Grande Valley (formerly the UT-Brownsville team), brings an average of 2619 to the tables. As usual, Webster and Dallas are both backed up by “B” teams rated over 2500, and Webster even boasts a “C” team rated nearly 2400. Of the traditional sharks, only the University of Maryland-Baltimore County, another 10-time PanAms winner and the only team to make the final four every year of its 15-year history, is fielding a lower-rated team than in 2014, with two GMs and an IM, but relying on a 1900-player on board four. Can they keep up their record alive? In a big round three upset, University of Texas at Dallas beat Webster "A" 3-1. Valentin Yotov defeated Liem Le on board one with Black while GM Nadezhda Kosintseva did the same on board three against Vasif Durarbayli. 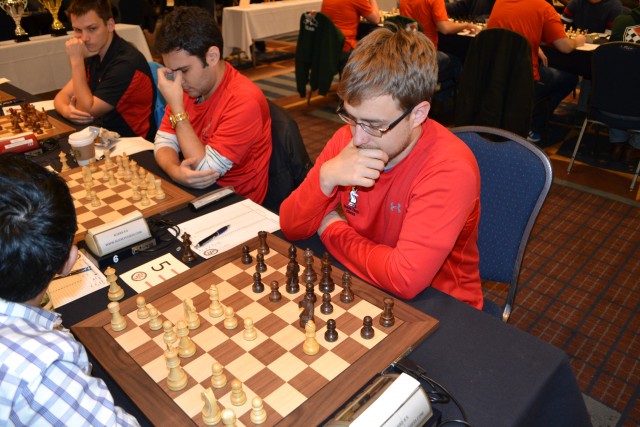 Five schools are now at 5-0. Standings after three rounds: 1. Texas Tech University “A”—First Board: GM Yaro Zherebukh 2. University of Texas-RGV “A”—First Board: GM Anton Kovalyov 3. University of Texas-Dallas “B”—First Board: GM Valentin Yotov 4. Webster University “B”—First Board: GM Alex Shimanov 5. University of Texas-Dallas “A”—First Board: GM Gil Popilski Two more rounds will be played on Tuesday and a final, sixth round Wednesday morning. Under the auspices of Oberlin College and the supervision of Chief Organizer Constantine Ananiadis, this year’s venue ranks with US Championship conditions. In a spacious playing area, each team is identified with a placard. The spectator room features a four-screen broadcast of the top boards, and a skittles room combines with a well-stocked bookstore provided by House of Chess. Upset winners even get book certificates at the end of every round. “It’s an honor to host the event and bring it back in Cleveland after 57 years! It’s great for Ohio chess and terrific for Oberlin College,” Ananiadis said. Chief Director NTD Joe Yun, backed up by both NTD Boyd Reed and Senior TD Kelly Bloomfield provide experienced, in-control leadership. The PanAm Championships offer six top overall prizes, as well as Division II, III, IV, and V honors. Trophies also go to the top community college, top four-year small college, and top boards. The top four US colleges will move on to the Final Four playoff in April at the Marshall Chess Club in New York City. Round 2 Individual Upset Prize 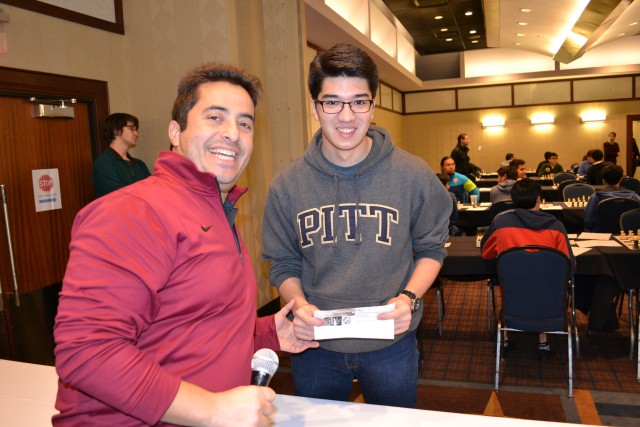