Carlsen’s Invitational was won by Dutch GM Anish Giri, who delivered an impressive performance from start-to-finish of the nine-day event, including knocking out the US Champion in two sets in the bracket semifinals, then topping Russian GM Ian Nepomniachtchi by sweeping a blitz playoff in the tournament finals over the weekend.

After being bounced from the main bracket by Giri, So lost again in two sets in a rather uninspired third-place match against the World Champion himself – the third such time the two have met at the end of a Champions Tour bracket, albeit previously for the first-place prize.

Winner of two previous Champions Tour tournaments, So looked poised to make a run at a tour “Major” event that promised double the prize fund and its winner a guaranteed seat in the tour finale next September. And everything looked on track after advancing through a 16-player round robin preliminary and into a secondary knockout bracket, as the third-seeded So first dispatched GM Alireza Firouzja in the quarterfinals, and even began his semifinal match against Dutch GM Anish Giri with a gift win as the black pieces.

But that was the last full point the US Champion would score in the Magnus Carlsen Invitational. After a quick draw with the Dutchman, So went on to drop a pair of back-to-back losses and ultimately lost Thursday's set 2.5-1.5. And after three draws in the semifinal’s second four-game set on Friday, So lost the last game of the day -- and the match with it – with an uncharacteristic blunder that more or less proved his mortality. 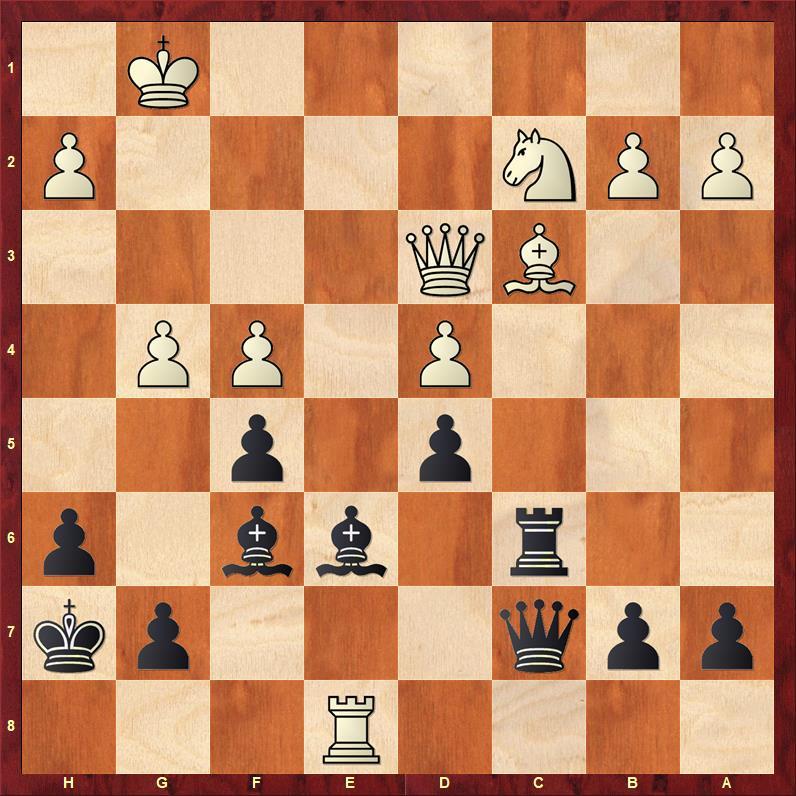 Image Caption
Even super-GMs make mistakes. US Chess Champion Wesley So made a mistake with 26. .. Qc7 and resigned the semifinal match immediately after Dutch GM Anish Giri's next move as White.

Carlsen did not appear to get his wish from before the bracket began, bemoaning “anyone but Wesley So” after having lost to the American twice in a Champions Tour finals. It seemed hardly consolation that the World Champion finally find his win in a third-place match.

Visibly dejected after losing to Nepomniachtchi in the other half of the semifinal, Carlsen was admittedly unmotivated in the consolation final with So, a put through the motions to determine standings and overall tour points. Matching the effort, the American lost two games in the first set Saturday, including this opener to the match: Carlsen’s odd 4. a4 in the Four Knights game led to a quick and decisive sacrifice attack that crumbled the American’s kingside.

So followed up with two consecutive losses with the white pieces: the first time on Saturday to officially lose the first set to Carlsen 3-1, and again in the first game Sunday that all-but iced his match fate. That game proved nothing came easy for the US Champion, punished for his seemingly innocuous 13. Nf3 by the World Champion’s kingside tricks.

Fellow American GM Hikaru Nakamura also appeared in the Magnus Carlsen Invitational, advancing out of the preliminary round robin and entering the bracket as its fourth seed. There he fell to Nepomniachtchi in the quarterfinals, losing in two sets in a flat effort.

After four tournaments in the 10-event Champions Tour, coming into focus are overall tour performance points that accumulate toward invitations to the $300,000 tour finale event in September. Having won two tournaments, So currently leads the Champions Tour with 140 tour points and $85,000 in prize money. Nakamura has bagged $30,000 and sits eighth place in overall tour points, though two players above him – Giri and Azerbaijani GM Teimour Radjabov – have already secured invitations to the September finale by winning Major events. 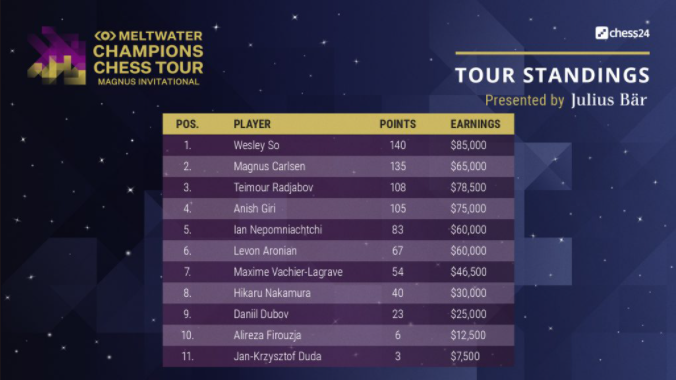 The next Champions Tour event is scheduled to begin April 26. By tour format rules, both So and Nakamura have secured their spot in the next event after advancing to the knockout bracket in the previous event. More information may be found at the official Champions Chess Tour website.