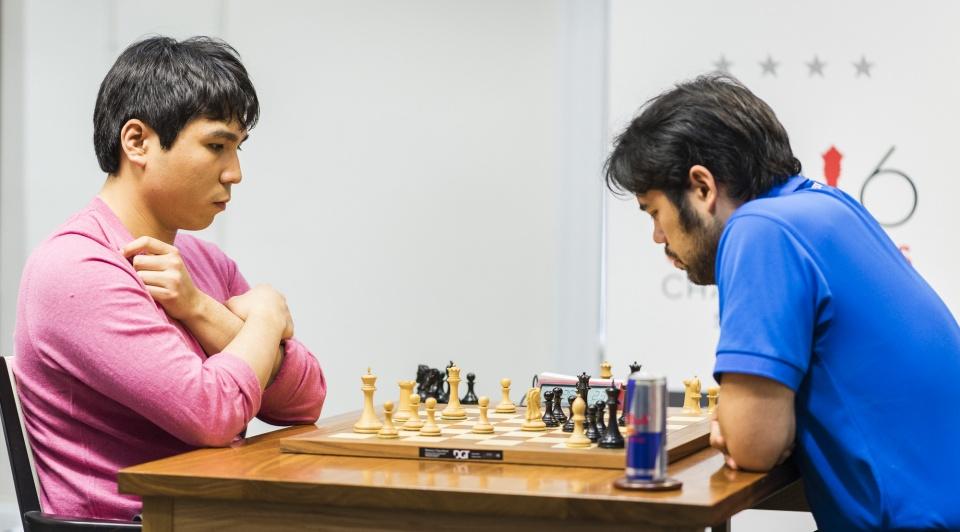 American Grandmasters Wesley So and Hikaru Nakamura have advanced out of the preliminary stage of the Magnus Carlsen Invitational and begun the quarterfinal knockout bracket on Tuesday.

Both U.S. juggernauts qualified in the fourth leg of the Meltwater Champions Chess Tour, the ten-event series of online super tournaments hosted by the World Champion’s Play Magnus Group, by placing in the top-8 players after a three-day round robin between the original field of 16 super GMs.

So earned the third seed after scoring 9.5/15, despite a rough opening day on Saturday that saw him lose twice to Dutch GM Anish Giri and Russian GM Ian Nepomniachtchi. But the US Chess Champion righted the ship in the latter half of the weekend, jumping from tenth place to third in the standings on Sunday by notching three wins and two draws. So has now reached the second stage knockout bracket in all four Champions Tour events.

Nakamura returns to the knockout bracket after narrowly missing the top-8 cut in last month’s Opera Euro Rapid, the only event in which he has not advanced out of the preliminary stage. Nakamura was solid through the weekend and finished undefeated plus-three, allowing him to coast through the final day of the preliminary Monday with five draws, most of them quick. He scored 9/15 and earned the fourth seed. 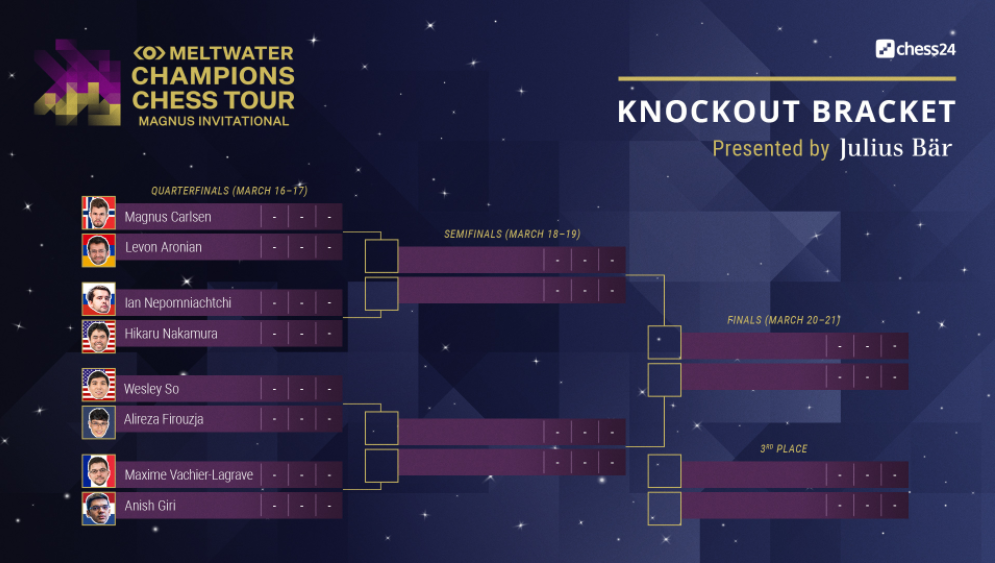 The Americans now enter the second stage of the Champions Tour format, an 8-player knockout bracket with each round played as a two-day match. So will face the youngster from Iran, 17-year-old GM Alireza Firouzja, while Nakamura draws Nepomniatchtchi. The quarterfinal matches are played as two sets, with four Rapid games played on each day. If the match is tied after two sets, a Blitz and Armageddon playoff will follow.

Defending his namesake event, Carlsen also qualified for the knockout bracket as the No. 1 seed. The World Champion has now earned the top seed in all four Champions Tour events – though he has yet to win one, twice losing to So in a bracket finals. His performance in the Magnus Carlsen Invitational was his best yet, however, earning the top seed clear with 10.5/15 which included a loss to Giri.

Carlsen will play GM Levon Aronian, who recently announced his intentions to play for the US Chess Federation and snuck in as the eighth seed with 8/15. Giri earned the second seed with a 10/15 score which included a five-game win streak; the Dutchman faces French GM Maxime Vachier-Lagrave in the quarterfinals.

The Magnus Carlsen Invitational is the second of three “Major” events in the tour that offer a $220,000 purse, more than double that of a regular event. Perhaps more importantly, winners of major events earn automatic invitations to the $300,000 tour finale event scheduled for September.

Despite the high stakes, Nakamura and Carlsen brought a moment of levity to the event in the final round on Monday. With both players already secure to advance into the knockout bracket, the World Champion forced a laugh out of the American by playing 2. Ke2! -- Nakamura’s patented meme opening, the Bongcloud Attack. Nakamura returned the smile to Carlsen’s face by answering back with 2. … Ke7! and bringing the chess universe its first-ever Double Bongcloud.

Here is a game between two soon-to-be teammates: Aronian and the reigning US Champion So, played Sunday in the sixth round, and annotated by Chess Life editor John Hartmann.

The Magnus Carlsen Invitational quarterfinal matches will be played Tuesday and Wednesday, with four games on each day beginning at noon eastern. The two-day finals match is scheduled to begin Sunday, March 21. All tournament information, including live play with commentary, may be viewed at the official Champions Chess Tour website.