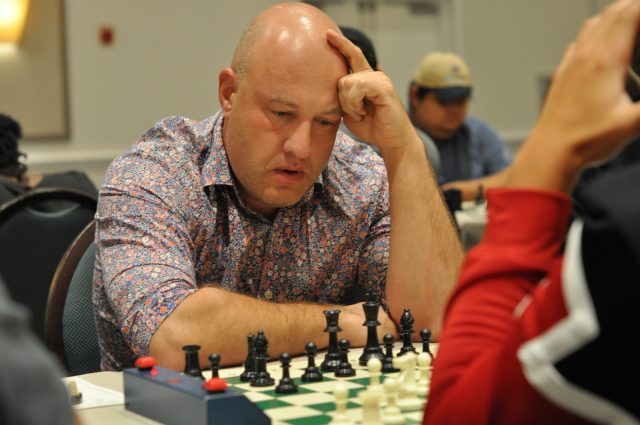 Shabalov has played in 16 Liberty Bell Opens and cashed in 14 of them, winning a total of seven times and taking top honors in the last four he has entered. His score in the Liberty Bell Open is an outstanding 75% (+ 66 = 34 – 10). This year Shabalov continued his domination. He scored 6-1 winning his first 5 games before “coasting” in with two draws. Shabalov played the 2nd, 3rd, 4th, 5th, and 6th place winners this year, so he earned every point. He provided extensive comments/annotations for this article. The 2020 Liberty Bell Open was held January 17-20 in Philadelphia, drawing 363 players in six sections. The Major section had 70 players including three GMs, five IMs, nine FMs, and two WFMs. 40 were masters. Of the top 10 players, just four remained perfect after two rounds. GM Bryan Smith won in round one, but was not feeling well and withdrew after playing only the one game. By the time the tournament merged there were only eight perfect scores: GM Alex Shabalov, IMs David Brodsky, Leonid Sokolin & Atulya Shetty, FMs Nico Chasin & Zoran Gajic, and NMs Ruben Cezila, & Noah Thomforde-Toates. In round three, FM Chasin held IM Brodsky to a draw on board one. The rest of the games were decisive as GM Shabalov defeated NM Cezila, IM Sokolin defeated FM Gajic and IM Shetty defeated NM Thomforde-Toates. GM Shabalov provides annotations for his win over NM Cezila. These results left only three players at 3-0: GM Shabalov and IMs Sokolin & Shetty. Because IM Shetty had opted for a fourth round half point bye, Shabalov was paired with Sokolin. Shabalov won to get to 4-0 in clear first place, a spot he would not give up for the rest of the tournament. GM Shabalov was actually seeded 2nd in the event, with IM Brodsky rated higher by two points and the top seed. This meant that in round 5, Shabalov would get paired up to an IM! The game was vintage Shabalov as there were fireworks, a direct attack on the enemy king, and the GM coming out on top! Shabalov provides notes to what winds up being one of the most significant games in the event. This result put Shabalov in clear first at 5-0 going into the last day. There was only one person with 4 ½, IM Shetty, and two players at 4-1, FM Gabriel Petesch and NM Evan Park. Shabalov had a clear path to first place. Facing sixth seeded IM Shetty with a ½ point lead, Shabalov might have been content with a quick draw with Black. The game went 60+ moves – definitely not a “GM draw!” This left Shabalov in clear first place going into the last round with 5 ½ out of 6. There were only two players at 5-1: IM Shetty and FM Petesch. However, with Shetty taking a last round half-point bye, Shabalov drew quickly with Petesch, guaranteeing himself first place. Shabalov thus finished at 6-1 winning $2247. Shetty and Petesch finished with 5 ½ tying for 2nd and winning $963. There was a three way tie for 4th at 5-2. In this tie was NM Evan Park who won $1000 as the top player Under 2300. GM Shabalov commented on Park’s tournament and his amazing round five game:

The story of the tournament! Pittsburgh's top junior Evan Park had a good tournament and then faced a huge test in the shape of IM Leonid Sokolin. It was a remarkable game where white eventually seized the decisive initiative and the game arrived at the following position:

This is a remarkable position with white's last move was Rh3, blocking black the rook check. Black is out of checks, down the queen and almost checkmated himself. So, Leonid Sokolin did what most of us would do in such a position - he resigned. However the computer reveals that after black's only move 1...Rg1..... the position is equal!!Not slightly better for white or white has winning chances. No, this is dead even. 0.00! The only way for white even to continue is to give up the rook after 2.Rg3 Rh1+2. Kg5 Rg7+ 3. Kf4 Rf1+ 4.Ke3 Rxg3 5. Ke2, but white is the only side here that could lose. In my whole chess career I have never encountered anything so dramatic and counter intuitive.

In the game Park-Sokolin, White can give up the rook a different way. After 1...Rg1 2. Rg3 Rh1 3. Kg5 Rg7 4. Kf4 Rf1 5. Rf3 keeps some winning changes, with the difference being that after 5...Rg4 6. Ke3 Re4 7. Kd2 Rxf3 8. Qe7, Black's rooks are not yet in position to give mate threats. Then White has time to take d5, after which his king has room to run and he has very real winning chances.
For the sharp eyed readers, there is a rather obvious mistake in the first paragraph of the article - the winning percentage and game scores don't agree. The mistake is entirely mine. I am travelling in New York for the Greater New York Scholastic Chess Championship and am going to check my notes and research when I return home on Wednesday and will post a correction. I apologize to the readers and especially GM Shabalov for what was completely my mistake. I did the research on my own without consulting Alex. Mea Culpa. David Hater
I just looked through some of my hasty notes. Apparently, my error was giving Alex 1 point for a win AND 1 point for a draw - 100 divided by 110 is 91% (not sure whether I did that pen and paper or if it was a formula error on a spreadsheet). Usually, I am a better TD than that and am completely aware that a draw is only worth half a point. :-( Mystery solved and mistake corrected (the winning percentage is 75%). The point I was trying to make about Alex winning frequently at the Liberty Bell Open is still valid. David Hater
Dear Colonel Hater, My name is not Igor but Leonid. I understand, that from the military perspective it's almost the same, but still could you please correct it? Respectfully, IM Leonid Sokolin
Both mistakes that I am aware of have been corrected. Thanks to those who pointed out the inaccuracies. I apologize to CLO readers and to the players involved. David Hater