San Fran Summer at the 35th US Chess School 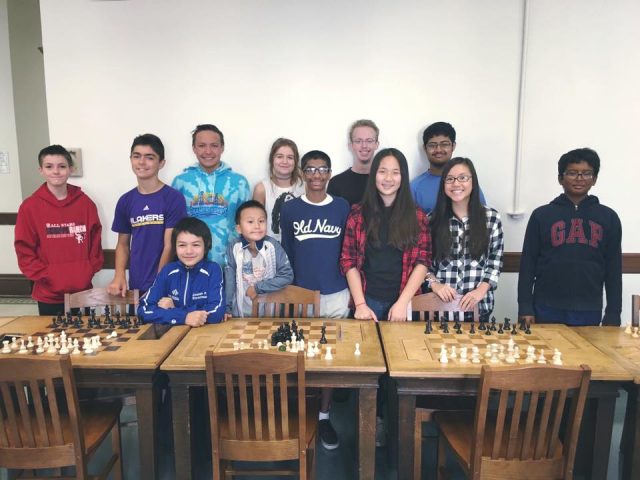 “No no, the rook was on c8, can we show the replay?” IM Greg Shahade complains seconds after he loses to NM Rayan Taghizadeh after the finale of the bullet tournament. This was just one of the many memorable moments from the 35th US Chess School Camp. The 35th US Chess School took place from July 25-28 in the oldest and arguably most famous chess club in America, The Mechanic's Institute in San Francisco, CA. The US Chess School is an organization that holds prestigious camps to train some of the top young players in the nation. These camps are sponsored, and, therefore, offered free of charge to the students. Since the camp was held in San Francisco, many of the students attending were from the bay area.  I was extremely honored to be able to train with 12 of the top players in the nation, in the sport (yes, chess is a sport; I can debate you on that all day) that I have been playing for 8 years now. Now, let’s get into the actual content of the camp.

As I walked into the Mechanic’s Institute (which I have done many times), I saw familiar faces, players from the bay area, many of whom I have played before. I also met the coach of the camp, IM Greg Shahade. I immediately liked Greg, as he was fun and chill, but at the same time taught us a lot. One of the most interesting things we learned on the first day was about specific positional themes. Many people study the idea of positional chess, the art of maneuvering your pieces, making your position better, exploiting your opponent’s weaknesses, etc. However, the idea of studying specific positional themes is a less common one. Take a look at this example from Techniques of Positional Play and then you will find the theme.

The theme of this one is the idea of blunting a bishop by forcing it to stare into a wall of pawns, making it less powerful. Once you study all of these themes, and drill them into your head with many examples, they become quite easy to apply in your real games. You have this thing in your head now, that whenever you see a bishop on the long diagonal, your instinct is to block it. Not only was this theme/idea instructive, we constantly referenced it throughout the camp, whenever there was the opportunity, even if the puzzle happened to be a tactical one. At the end of the day, we had a simul. Greg was greedy, and took white against all of us. His “goal,” was to score more than 50%, and once during the simul jokingly stated “I think I am playing for a draw in every game!” However, Greg scored well above 50%. The games were going so late that when it was time to go, he simply adjudicated games, most of them in his favor. 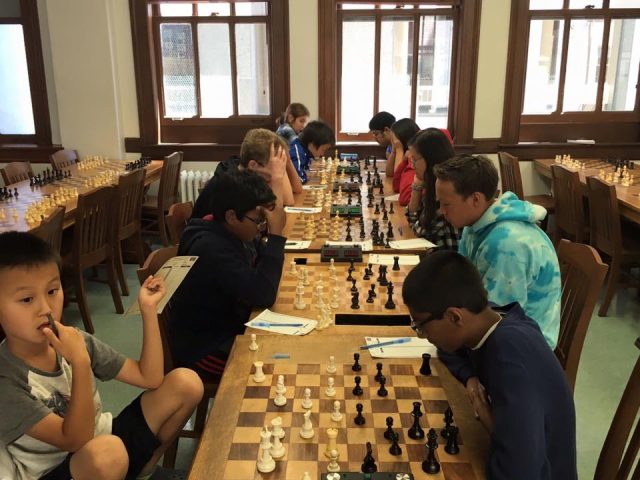 Concentration at its finest... Training games at USCS 35!

I was now used to the environment, and the second day was even more fun. Here are the highlights of a couple of the eventful things that we learned. We talked about what to do when you don’t know what to do, and I learned a very simple and easy way to sometimes find the best move very quickly. These are the three questions you should ask while you are playing (referenced from Jacob Aagaard’s great book, Positional Play).

All of these questions can be flipped and thought of the other way, for example “What is my opponent’s best placed piece?” One of the funniest moments of camp was going through this famous game, and one moment in particular. This game is quite famous, and for good reason. See if you can figure out one of the most famous moves in chess history (from a Sam Collins book).

Now, before seeing this, many of you may have thought that this “brilliant” move was going to be a gorgeous tactic, winning on the spot. However, I think that this is the exact reason that it is famous. It is not something that might blow your mind right away, but rather shows the power of the three questions, and Karpov’s ability to slightly improve his worst piece and slowly crush his opponent. Now, once again this Nb1 move is playable in so many games, with this simple idea of relocating a night on c3 that might be dominated by a pawn on c6. Similar to the f6-e5 blunting the bishop, this immediately became one of the most memorable things, as we would suggest Nb1 in positions where white might have a pawn on a3 and a bishop on d2. At the end of the day, there was the bullet tournament. Four players got a first round bye, and, although I was knocked out in the second round, it was very entertaining. In the championship, Rayan Taghizadeh played Josiah Stearman, two of the four players above 2300 at the camp. Rayan won after a decisive attack on the kingside, but Rayan had to take on Greg. Here is a video of Greg taking on all comers on bullet. [youtube This is very funny, and, as we check the replay, Rayan moved his rook right in between c8 and b8, after which he proceeded to checkmate Greg with just 2 seconds on his clock.

On the third day we learned about active defense. Active defense is the idea that when you have a bad position, even if you might be losing, you should always look for active counterplay. You do not want to play a very defensive passive move and simply wait for your opponent to kill you. We played a training game related to this and in this position black should go for active defense. This example is from Boris Gelfand's recent book on positional chess, available on US Chess Sales.

After, we played the blitz tournament. Once again, it was Rayan vs Josiah in the finals. In a crazy night endgame, the players agreed to a draw and went to the bullet. Rayan prevailed once again, becoming the first player in US Chess School history to win both the blitz and the bullet tournaments.

Unfortunately, the camp was coming to a close, and for the last day we did some pretty fun things. We took a trip over to Fyber, a video game company nearby. It was a lot of fun as we played ping pong, Smash, Clash Royale, and most importantly, raided their pantry. Here is a clip of Christopher playing ping pong with one of the employees.

That was all fun, but there was still chess to do. Greg gave us a test. Not just any regular test, this was an intuition test. The test was created by Aviv Freidman, full credit to him. The intuition test is given to test your instincts, as you only get 45 seconds per puzzle, thirty puzzles. While you only had to write down one move, some of these were tricky, and 45 seconds is a short amount of time. Here is a quick puzzle, time yourself, you only have 45 seconds!

They say all great things end, and unfortunately, this camp did too. Overall, I had a blast playing blitz and bughouse, sharing laughs, interacting with the campers, and the experience as a whole. And, of course, through all of this, I learned a lot. I would like to thank not only the sponsors, but also the founder of US Chess School and our coach, IM Greg Shahade, and, of course, my fellow campers. Thank you for making this experience a great one! Pictures and additional info can be found on the Twitter, Instagram, and Facebook account of @USChessSchool as well as the Official Website. Today USCS tweeted about the original inspiration for the program:

So sad to hear of the passing of the great Mark Dvoretsky. His books and training sessions were the inspiration to start the US Chess School

WHAT A MARVELOUS CONEY ISLAND FLASHBACK! ..FOR 1,000 DAYS 1968- 1971 I VIRTUALLY LIVED IN THE SAN FRANCISCO MECHANIC'S INSTITUTE CHESS ROOMS AND ONCE HID OVERNIGHT IN THE BELOVED ONE AND A HALF CENTURY OLD LIBRARY'S SECOND FLOOR TIER CHESS BOOKS STACKS ASIDE THE TOP SECRET CAPTAIN MIDNIGHT ATTIC FAN...Mr. Shahade is the titanic chessic pioneer- Thomas Edison amidst a bewildering hopeless wilderness called the US chess federation which absolutely does not for one moment deserve this monster chess promoter and marvelous,gutsy, fiery innovative thinker- period. The federation undeservedly just got plain lucky beyond all measure. Oh yes..I very much liked the new Rayan-Vitaly Radaikenesque half move... don't worry, be happy.. shoot a rook to the sky.. half touching TWO squares and instantly employ said rook on EITHER file convenient for checkmate with a mere two seconds left for the doomed opponent. Remember chess students- - "HELP YOUR PIECES SO THEY CAN HELP YOU!" Paul Charles Morphy (1837-1884).......We fondly recall the legendary quip from 1970's Texas chess roadrunner, author and real chess genius -the 'Capablanca of the cattle country' Mr. John Hall... " Why ..how neat.. surely an innovation indeed"... Of course new chess can also get you killed...several documented cases of people actually dying after chess boards were broken atop their heads may be found in ancient newspaper archives around the world. No joke, this really has occurred. Jude Acers/ New Orleans,Louisiana
[…] our report on the 35th US Chess School in San Francisco here, and look for a report on a special World Championship edition in New York City coming up next […]