Rapid Success from Vegas to Berlin: Nakamura and Carlsen 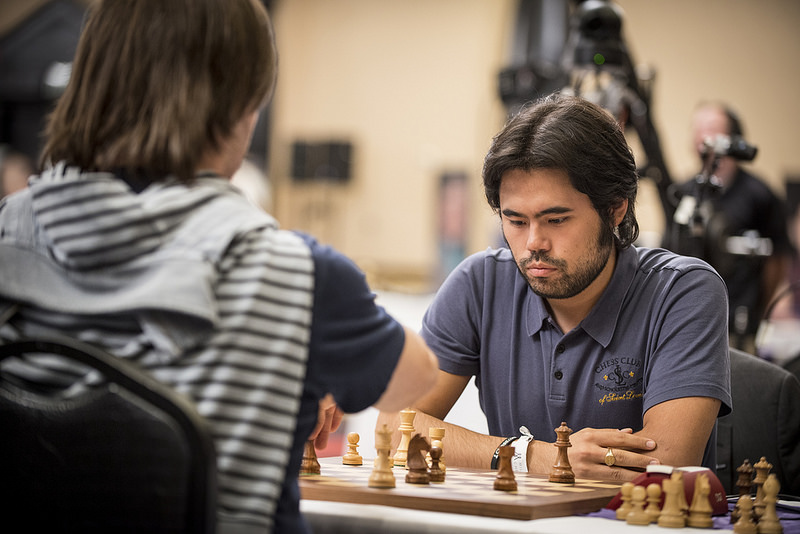 The only FIDE rating list where Magnus Carlsen doesn’t tower over his competitors is rapid chess. That honor currently belongs to Hikaru Nakamura -- by a 3 rating point margin. Millionaire Chess follows a unique format: At the end of seven rounds of classical chess, the top four scores in the tournament qualify for Millionaire Monday, a knockout match for the grand prize. After the classical rounds, three leaders emerged: Yu Yangyi, Le Quang Liem, and Aleksandr Lenderman with six points. Meanwhile, the U.S. top three (Nakamura, Caruana, and So) along with seven other grandmasters tied for the fourth and final qualification spot for Millionaire Monday. This lead to an elaborate tiebreak match system that involved splitting the competitors into two groups by rating and a series of rapid and blitz elimination games. The quickest win was Nakamura’s shocking 11 move victory over Evgeny Bareev, an elite grandmaster formerly #4 in the world.

It's so early in the game that only two pieces are developed for both sides. How did Nakamura find a way to get an advantage?

9...Ng4 Black notices an opportunity to corner the white queen. 10. Bg3 Nakamura threatens 10...g6. 10...g6 11. Qh4 The white queen's only safe square.11...Bg7 A regular-looking developing move that threatens the devastating ...Bf6. White resigns What can White do? The queen is not completely lost, but 12. Be5 Nxe5 13. dxe5 Bxe5 is a disaster.
After several rounds, Nakamura was the winner of group B while So, last year’s Millionaire Chess champion, was the winner of group A. This meant another rapid chess match, of course. The first two games were drawn. In the fourth game, Nakamura got the better of So.

Black's position is on the verge of collapsing. How did Nakamura finally breakthrough?

On Millionaire Monday, Nakamura and Le Quang won the semi-final matches. Nakamura defeated Yu Yangyi. Le Quang Liem, who had a fantastic tournament in the classical portion, went on to defeat Lenderman.

Here is Quang Liem’s position from his victory over Conrad Holt in round 4.

Black to move. Which idea quickly leads to victory?

In the final, Nakamura achieved a commanding victory in the first game.

How did Nakamura convert his better position into a material advantage?

In the last game of the final, Nakamura achieved a comfortable draw, making him the 2015 Millionaire Open Champion. While most players in the open section played nine rounds of chess, it took Nakamura 21 rounds to earn the $100,000 grand prize. Find full details on the Millionaire Chess website and an on scene wrap-up by GM Chirila.

World Rapid Championship: Carlsen is the first player in history to win two years in a row

On the other side of the world in Berlin, Germany, Carlsen fought to defend his World Rapid Championship title. Carlsen had a shaky start and ended the first day tied with 15 other grandmasters for 2nd place behind Sergey Karjakin, who won the World Cup just days before. The next day, Carlsen took the lead and held it until the finish, ending the tournament a point ahead of the field.

In the endgame, often the more advanced passed pawn determines the winner. How did Carlsen turn his into a victory?

The World Blitz Championships began today. As the returning blitz champion, Carlsen will have a chance to repeat his feat in the rapid. Look for a report from the scene from GM Ian Rogers.