From Princess Leias to Queens of Chicago: the 16th KCF All Girls Nationals 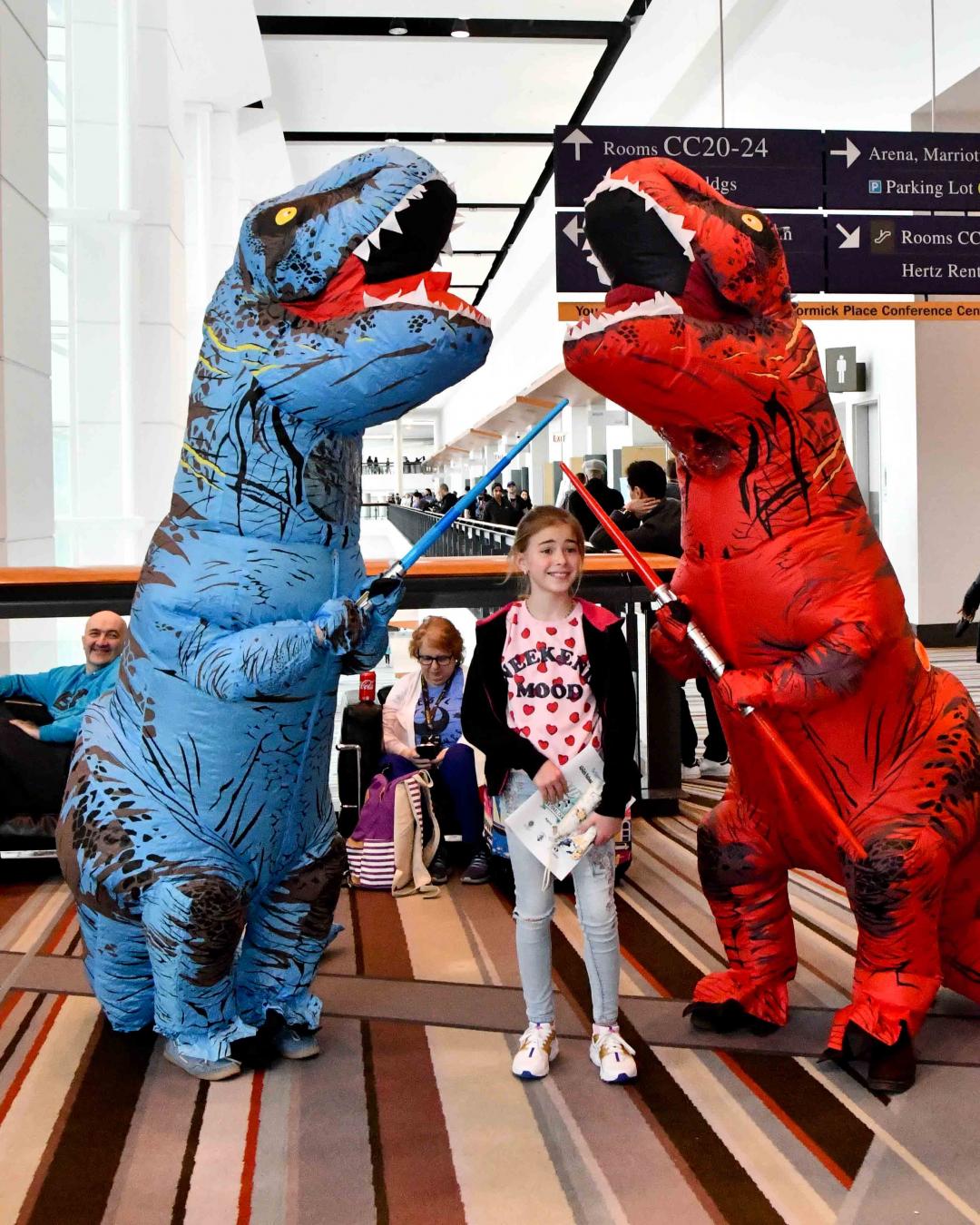 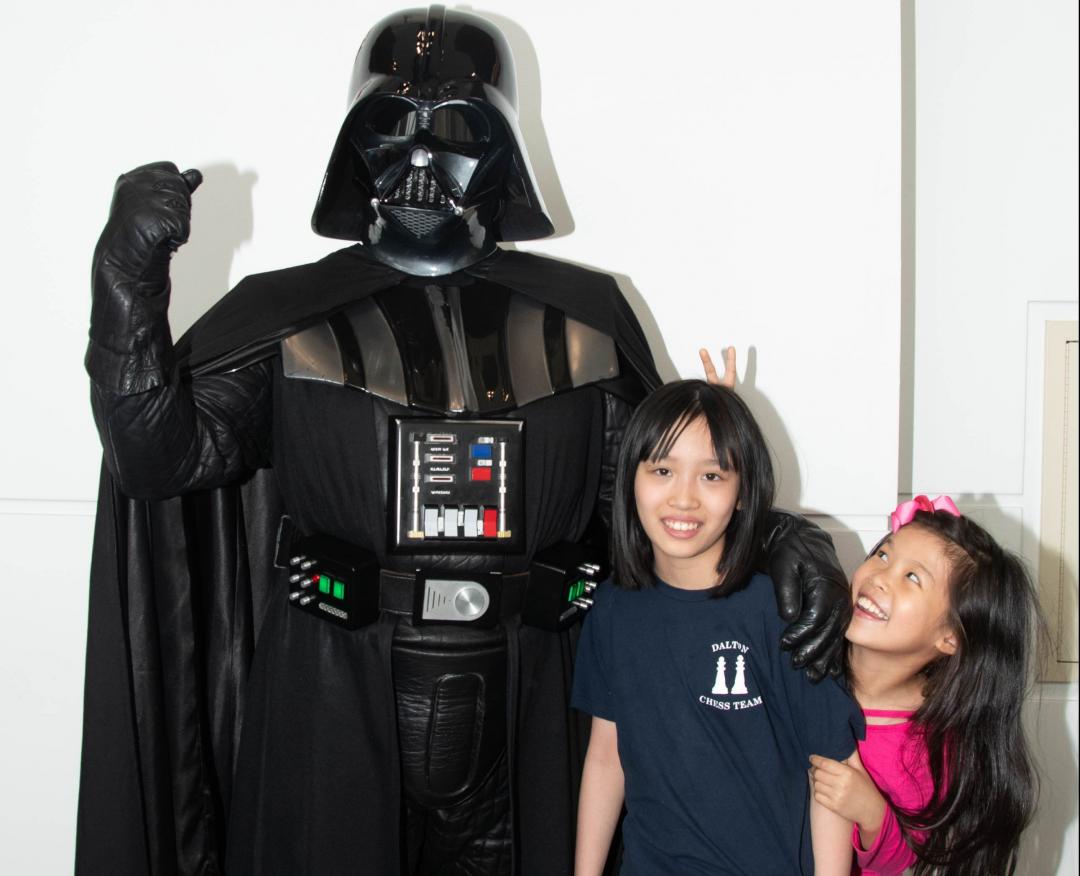 Under 12 Champ Iris Mou (blue) with Darth Vader and fellow Dalton player Michelle Jia, Photo Betsy Zacate
On the weekend of April 12-14, the Chicago weather went from early Spring 60 degrees on Friday to a snow storm on Sunday. Han Solo and Darth Vader roamed the city during an international Star Wars Convention. The only part of the weekend that seemed standard was the return of the Kasparov Chess Foundation All Girls National Chess Tournament, presented by KCF and Renaissance Knights Chess in association with US Chess. The main playing hall was moved to make room for the intergalactic travelers but the stiff competition was in full force in six sections, from Under 18 to Under 8. The only perfect 6-0 score of the entire tournament was earned by Alexandra Phung of New York in the Under 8 section. The 7-year-old star is also a golfer, and was recently quoted in an online golf magazine:

“In some cases, golf and chess can be the same,” Alexandra said. “When you play golf, you need to be focused. The same with chess – you have to be focused.” 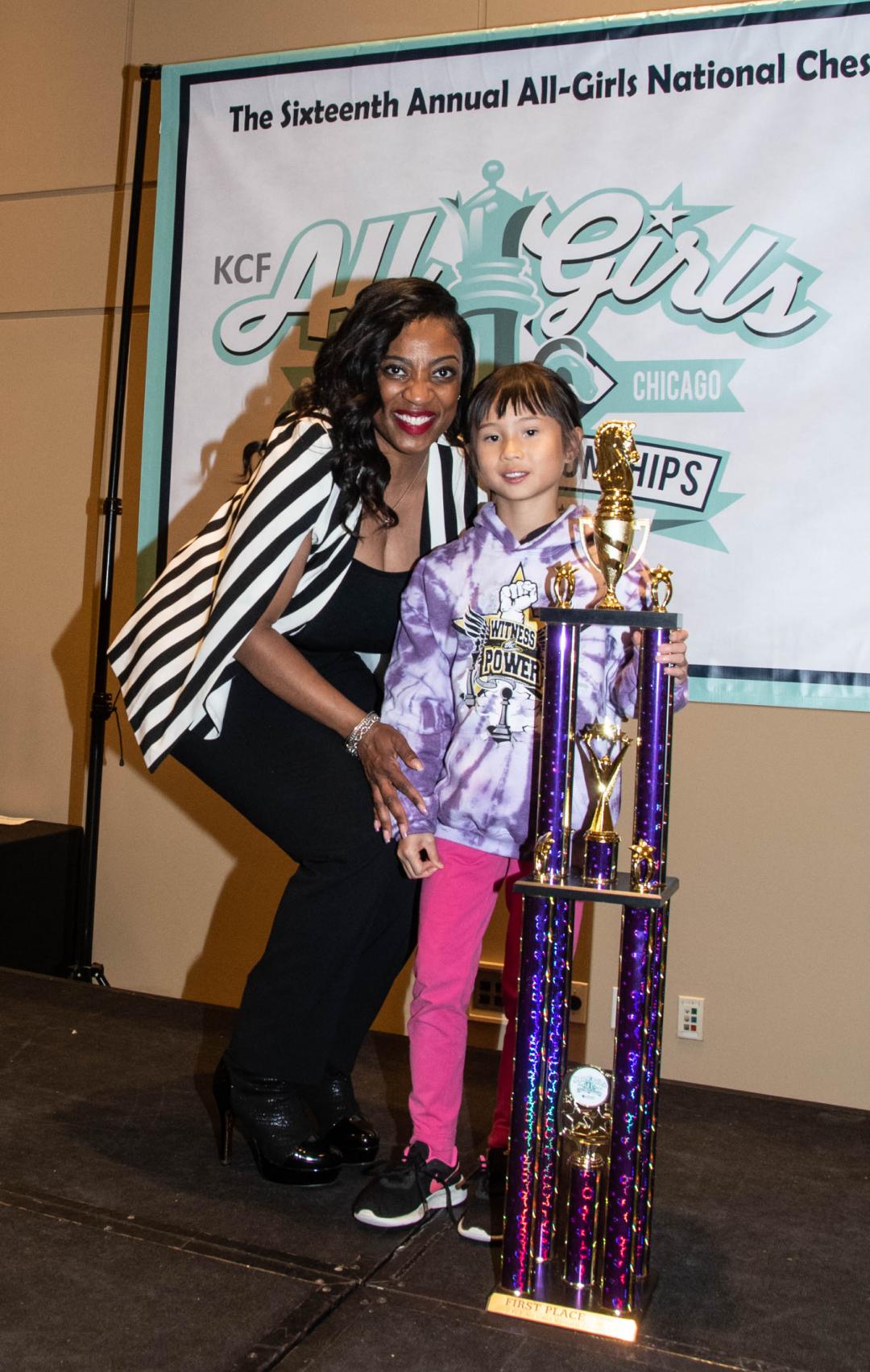 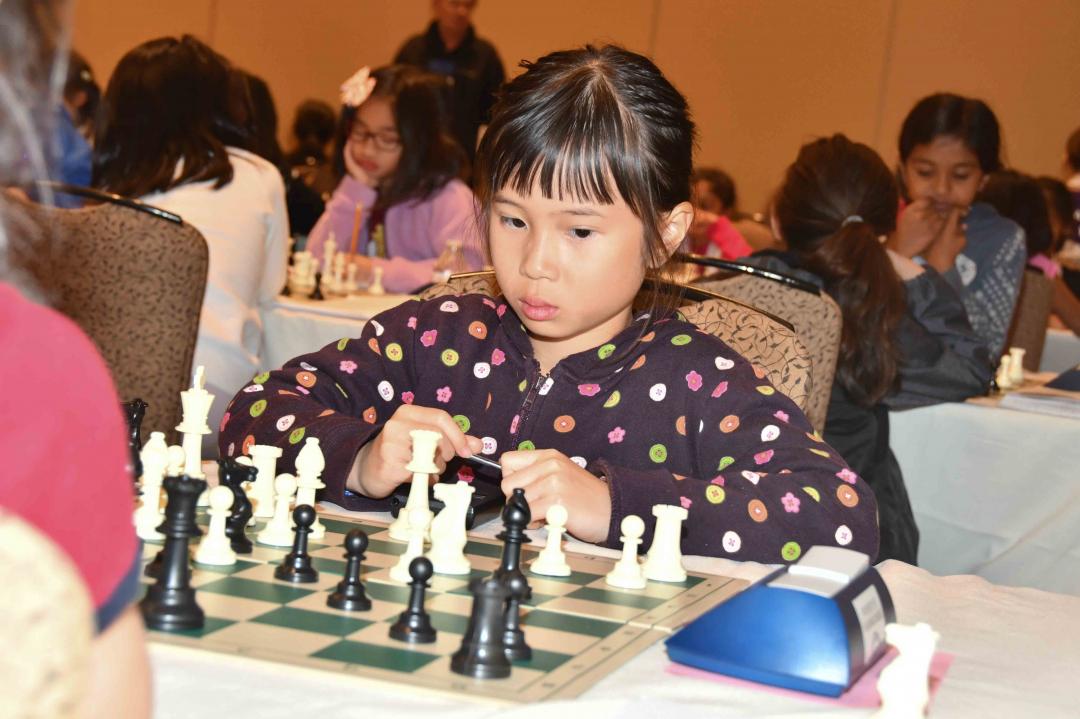 Phung at the board, Photo Betsy Zacate

Alexandra Phung with her first place trophy, Photo Kimberly Doo McVay
The Under 10 Section ended with co-champions, both with 5.5/6. The first place trophy was awarded to Riya Kanury of Massachusetts and second to Mary Elisabeth Tracy of North Carolina. 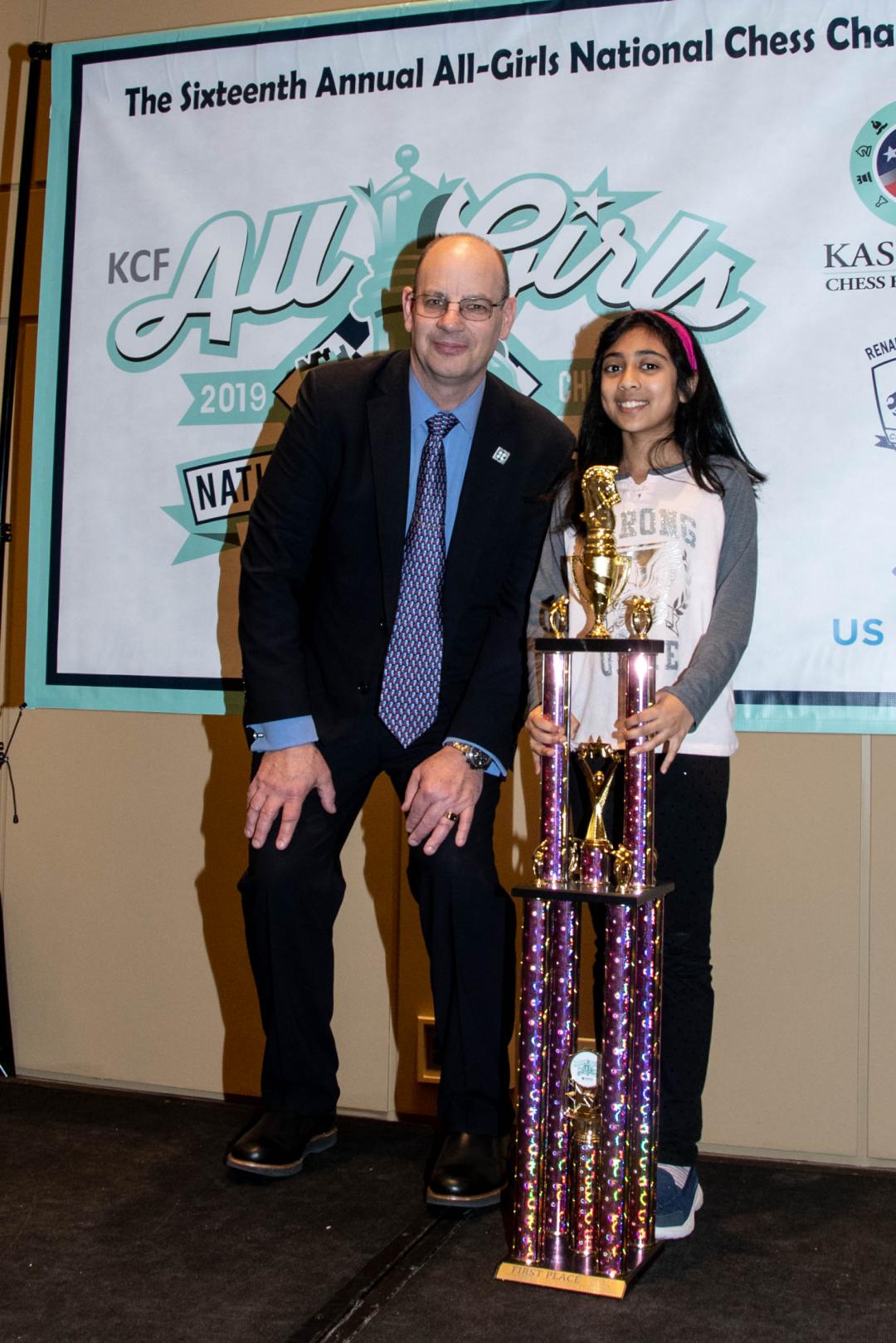 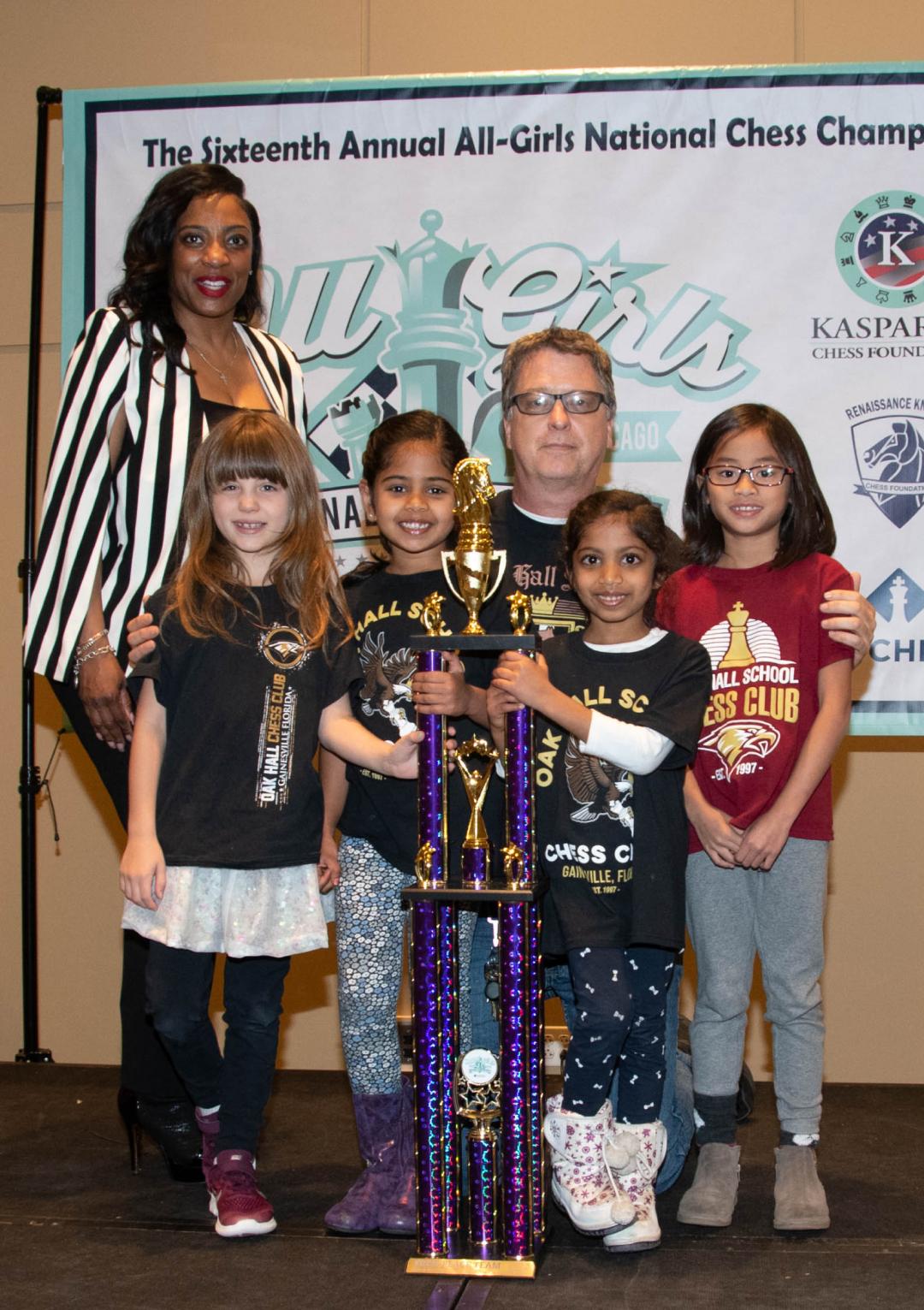 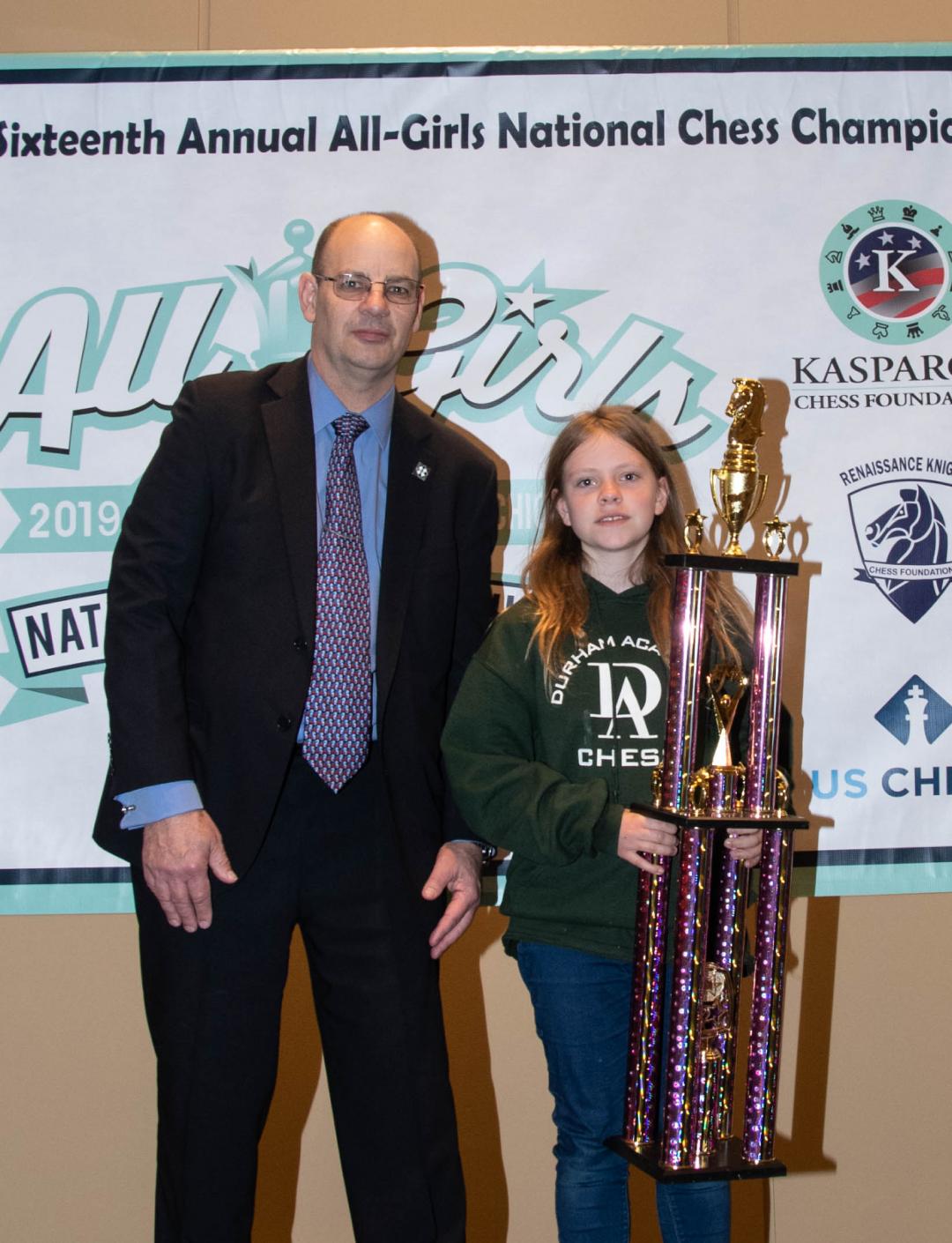 Mary Elizabeth Tracy, Under 10 co-champ, by Betsy Zacate
In the Under 12, Iris Mou, who qualified for the Under 10 Section, took first with a half point lead. Mou played up in order to be with her Dalton School of New York teammates. The Dalton team also finished first. 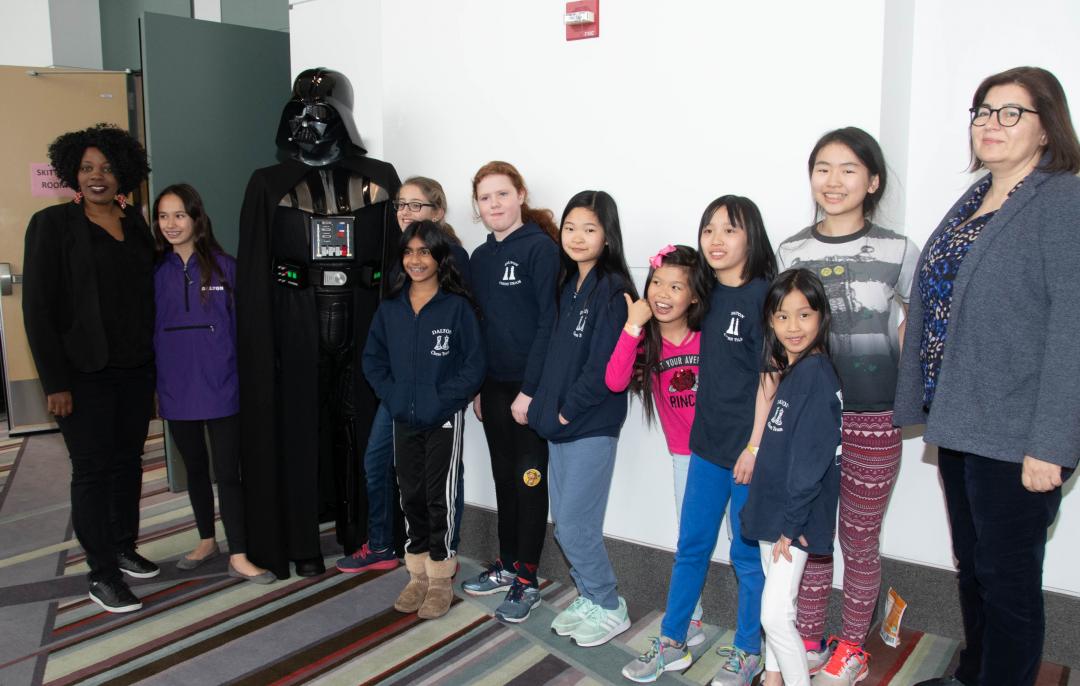 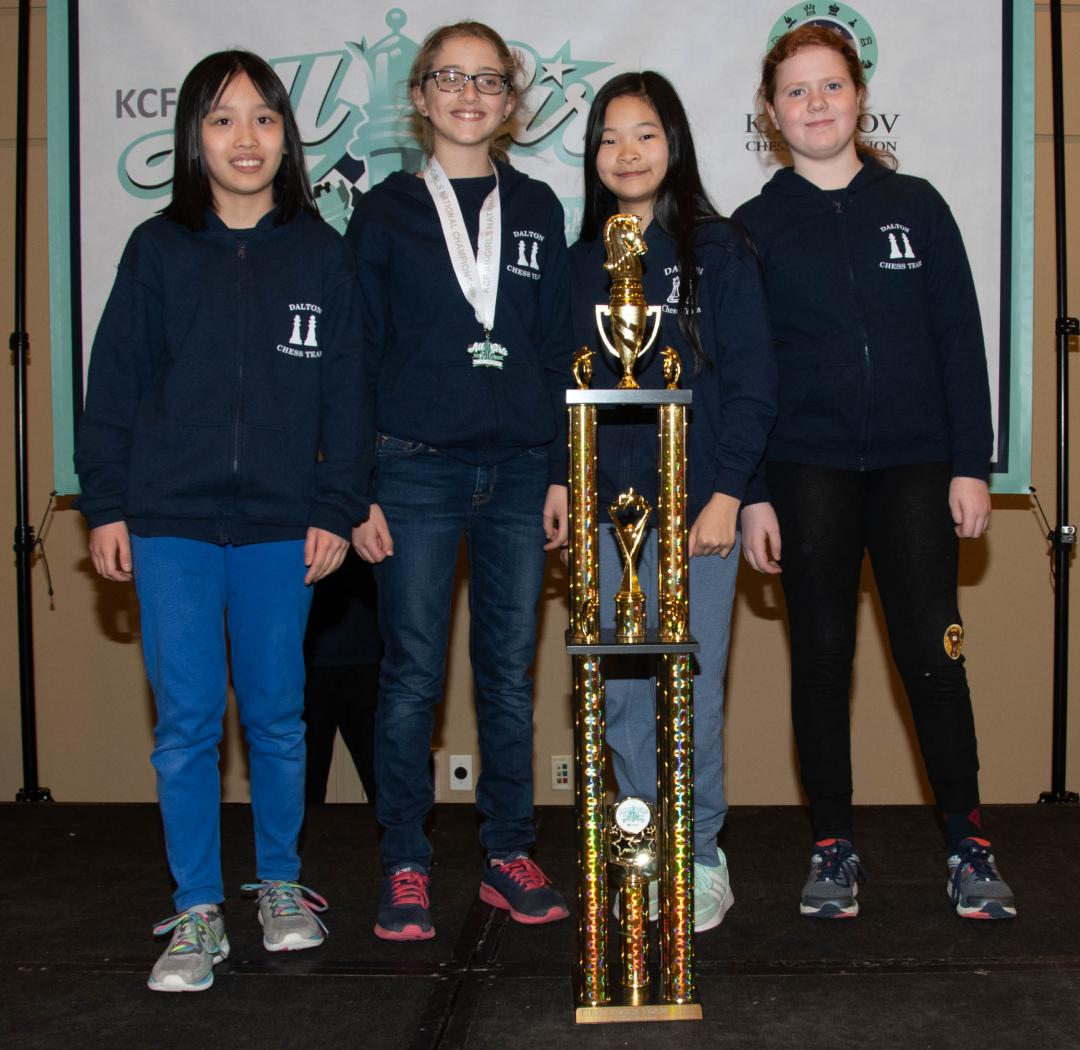 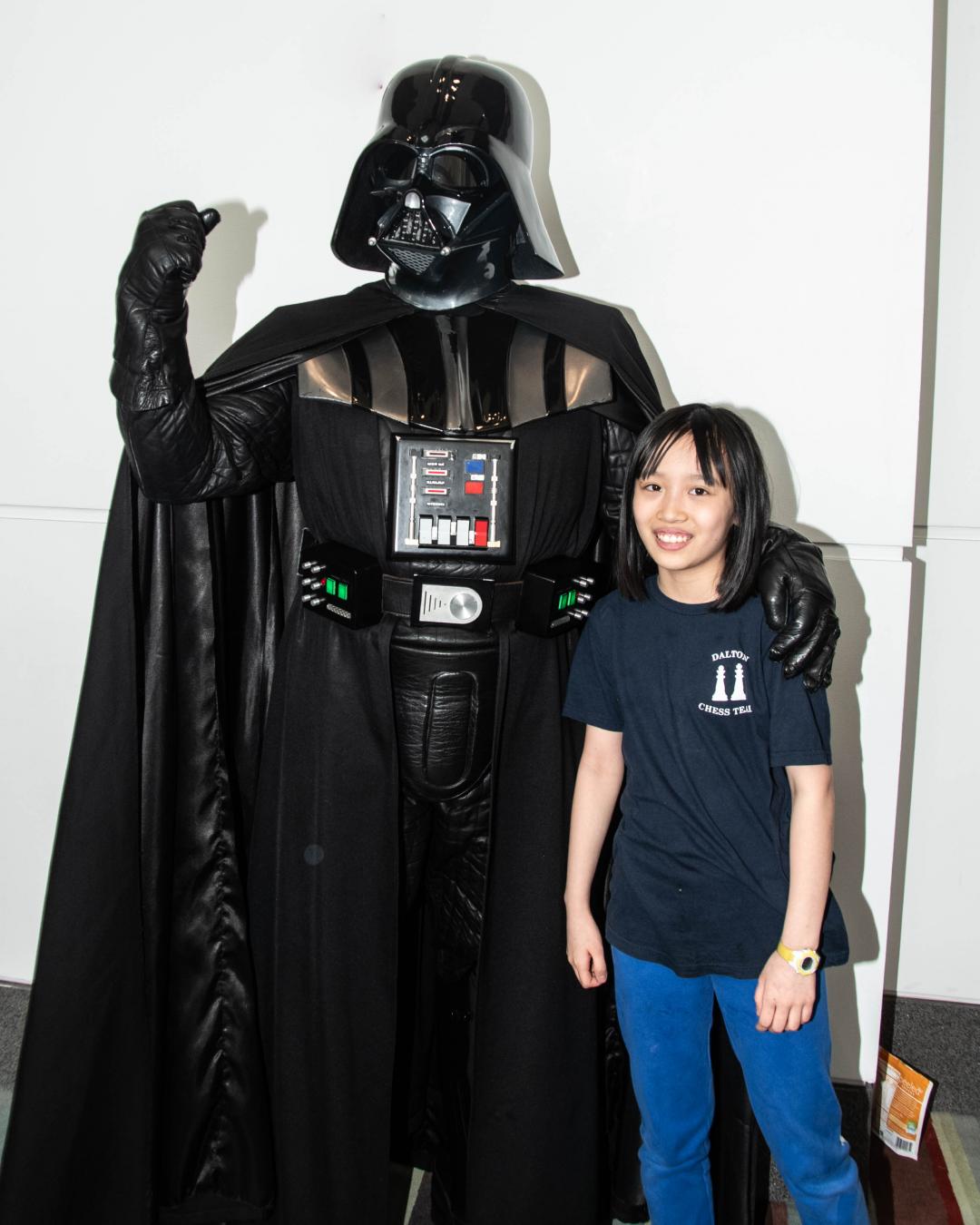 Mou with Darth Vader
Mou’s only draw was to Celina Zhou of Missouri on Saturday morning. Stuck in the airport on Sunday night, Mou retained her high spirits and spent the extra time annotating her final round victory for CLO. Sophie Tien of Washington State was crowned the Under 14 champion while IS 318 took top team honors. 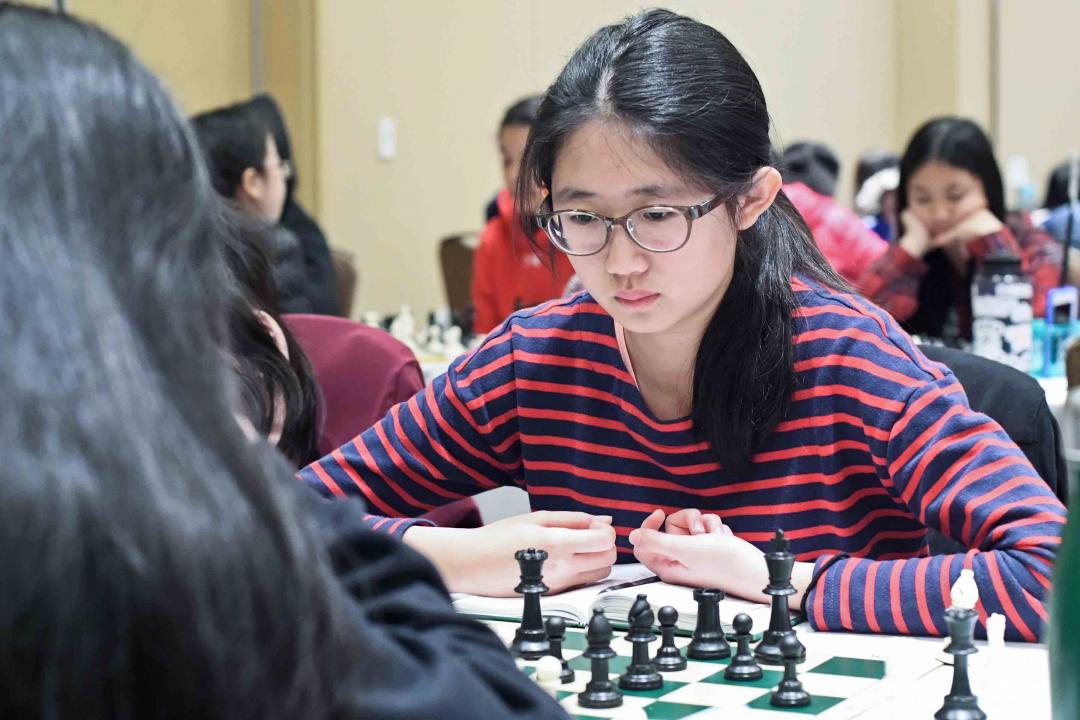 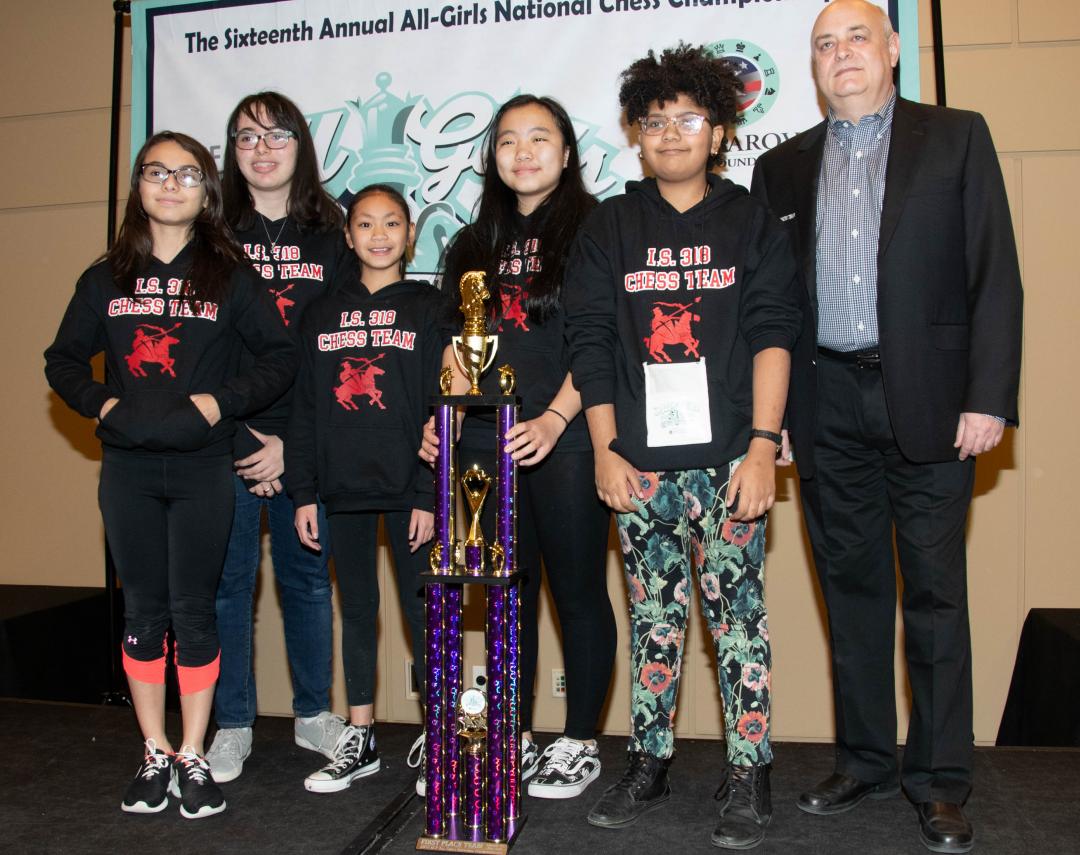 IS 318, Top team Under 14, with KCF President Michael Khodarkovsy
One of the unique parts of female only chess tournaments is the bonding of the players. Over the years many girls have repeatedly played in the All Girls tournament to bond with friends from other states. Natalie Wisniowski of Chicago shared, “I don’t know I just feel better playing a girl, playing the same gender, just feels better.” 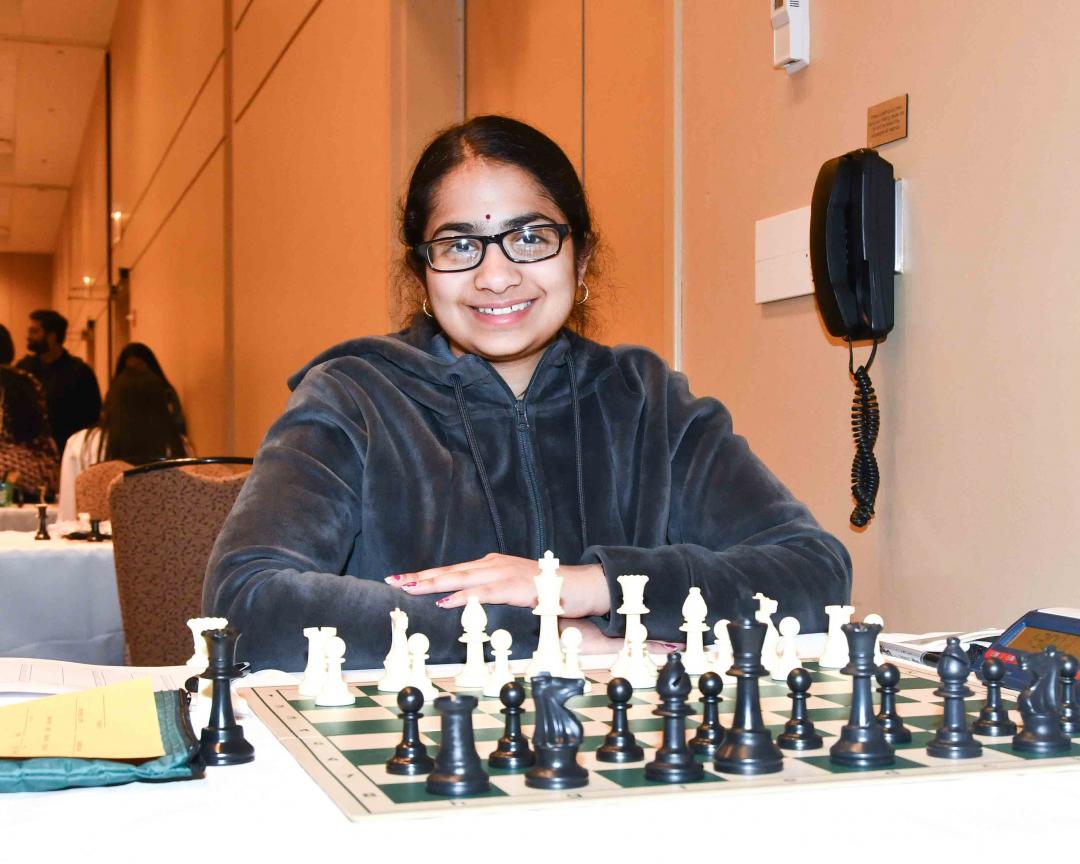 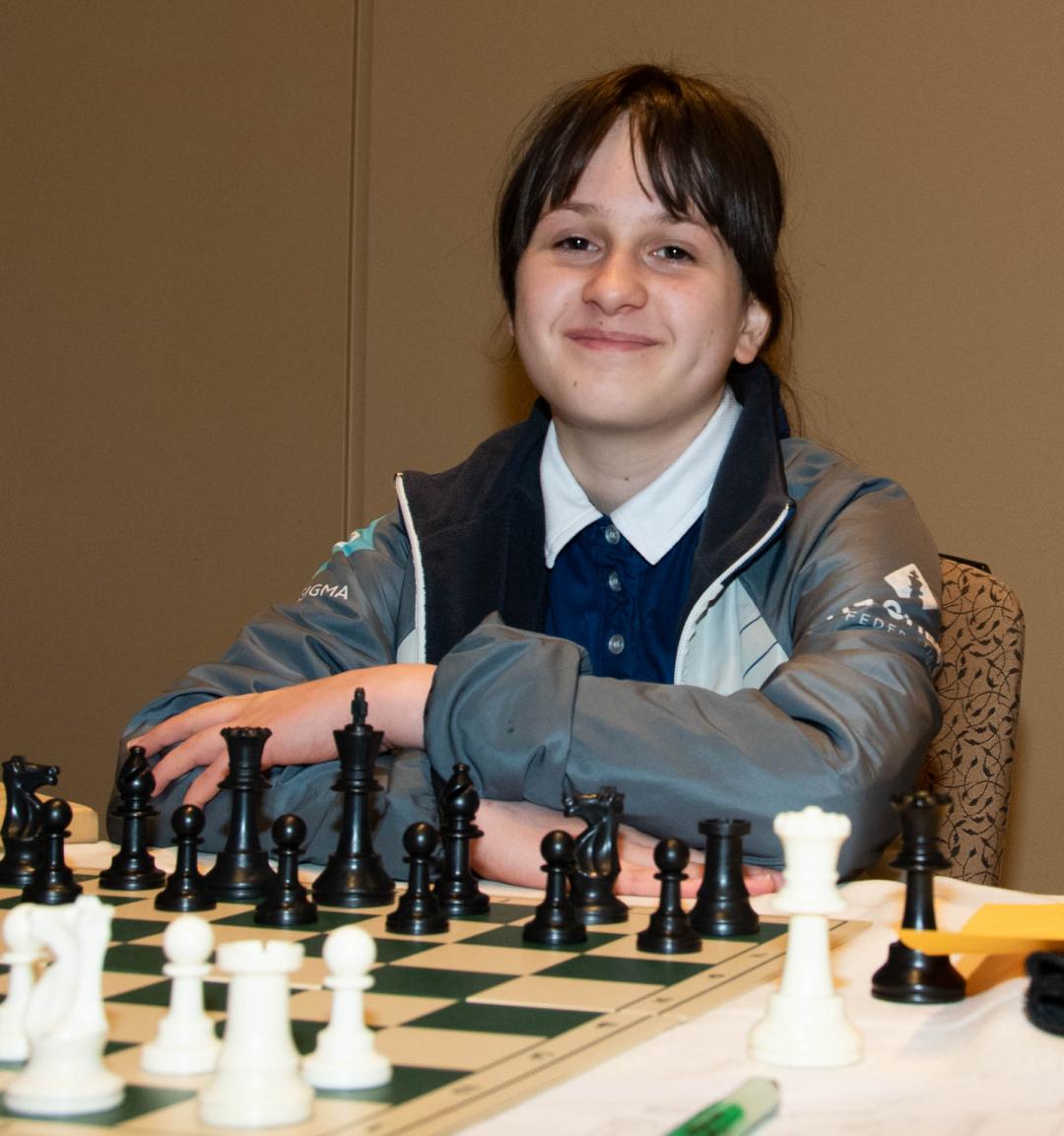 Natalie Wisniowski U18 by Betsy Zacate
In last year’s “Girls in Chess” video, filmed at the 15th edition of this tournament, girls of all ages talked about why these tournaments are so important. Angelie Feliciano-Soto of Esperanza Academy in Philadelphia told me the draw of the All Girls Nationals comes down to the camaraderie. “When you have your friends around, they inspire you to do better and stay strong, be confident about yourself.” 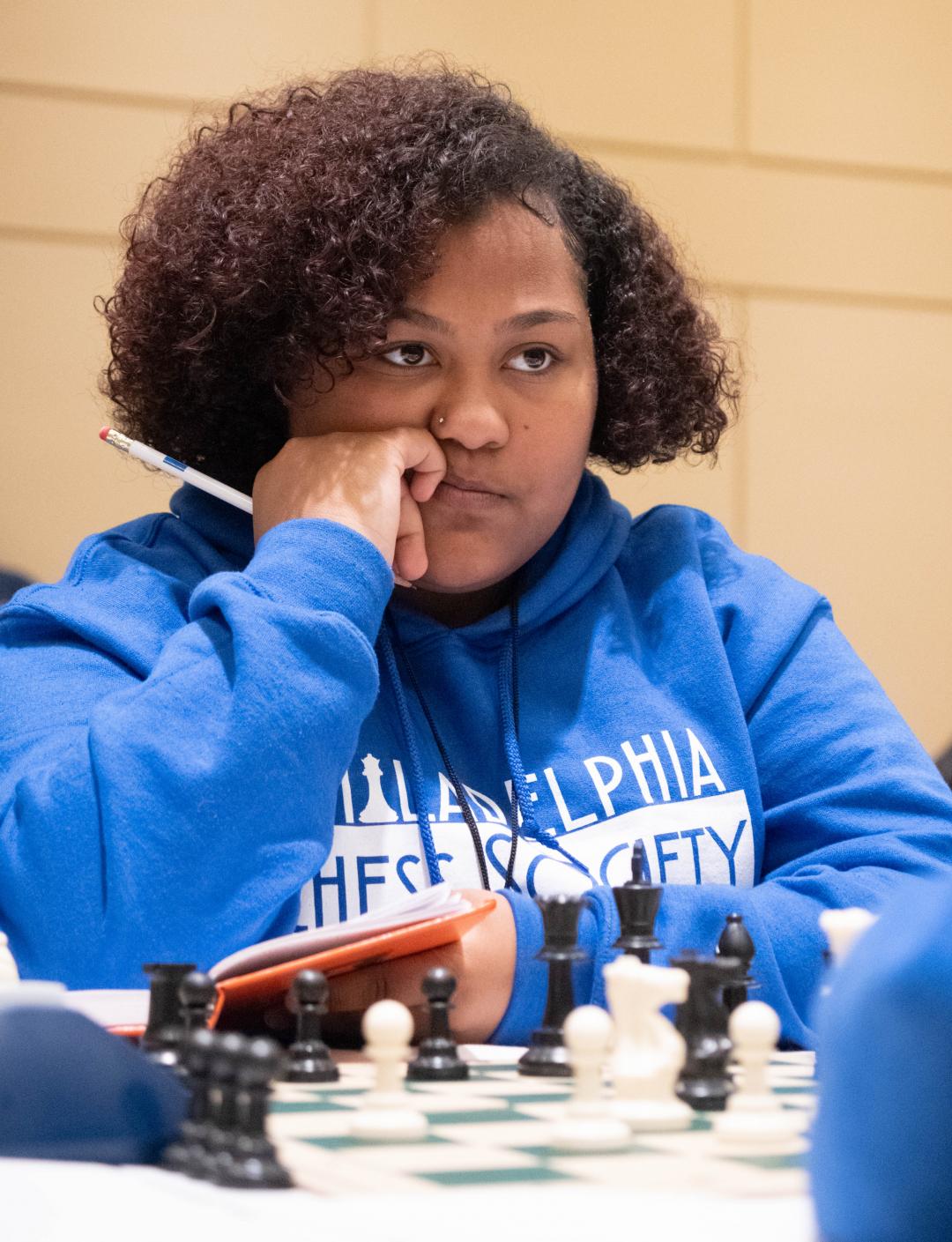 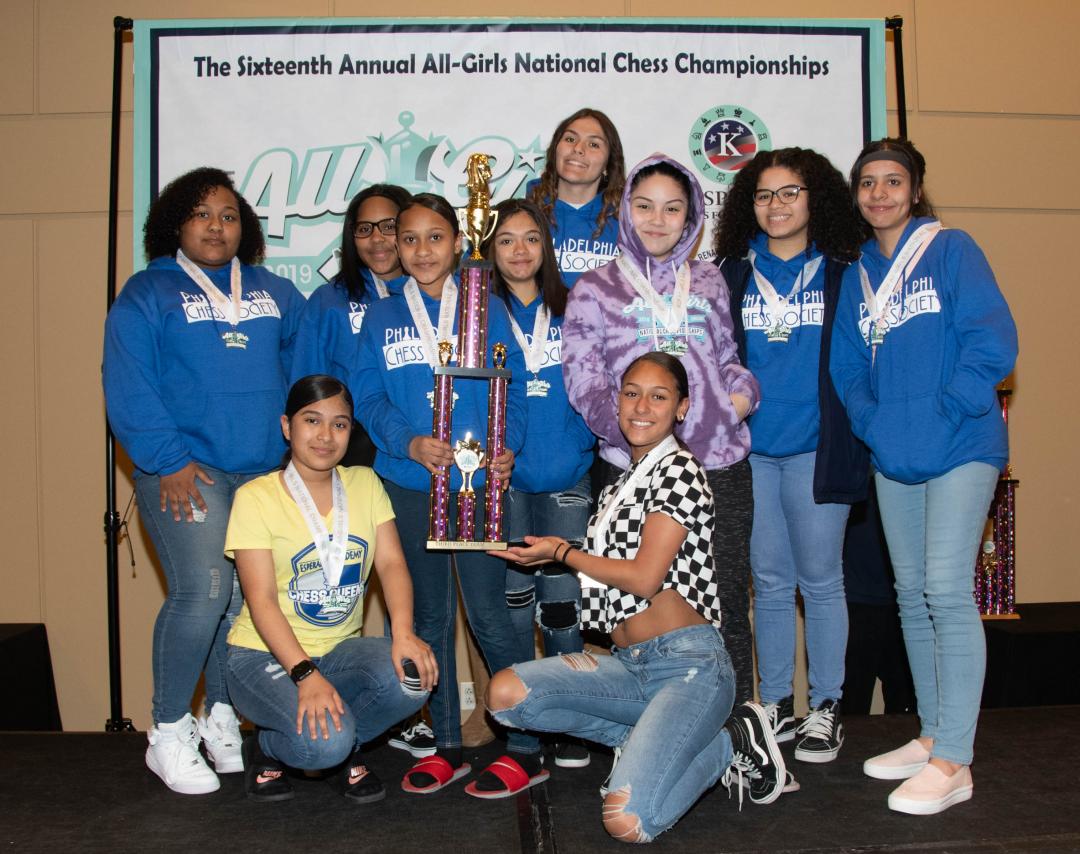 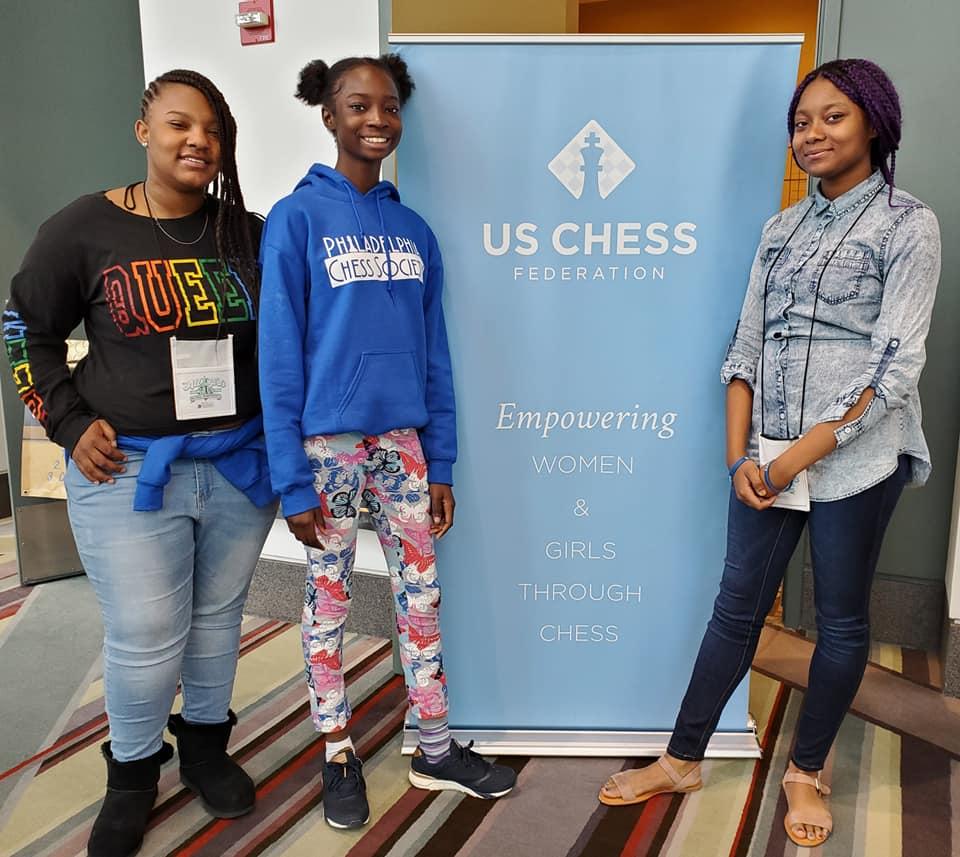 Minor Threats Team of the Philadelphia Chess Society
Anna Miller an 11 year old, traveled from Chesapeake Bay Maryland to play in her first girl’s only tournament. Anna heard about the event from Chess Girls DC founder Robin Ramson, who recently appeared on the US Chess Podcast, "One Move at a Time." When asked to compare and contrast her experience to playing in an open tournament, Anna said, “I think both are really cool but this is nothing like I expected and it is really interesting. I like it a lot.” 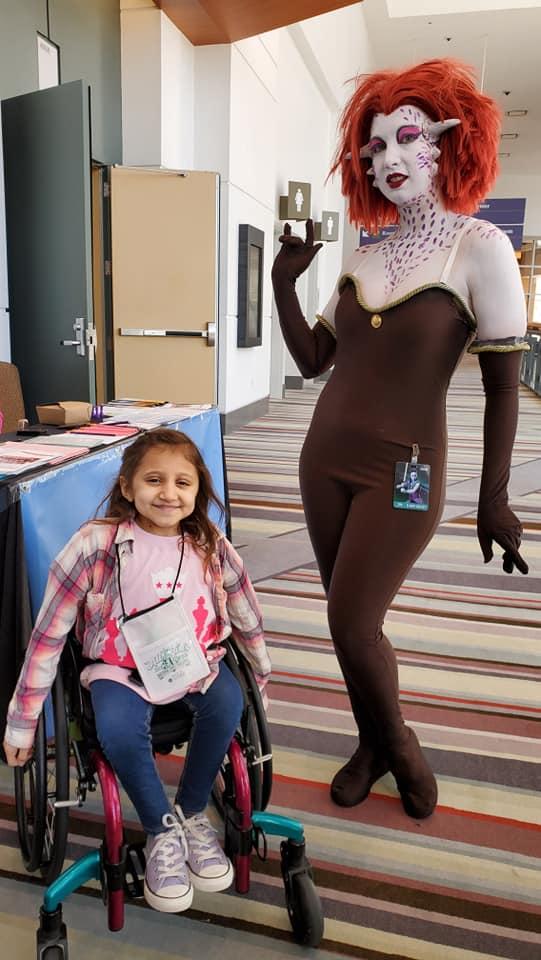 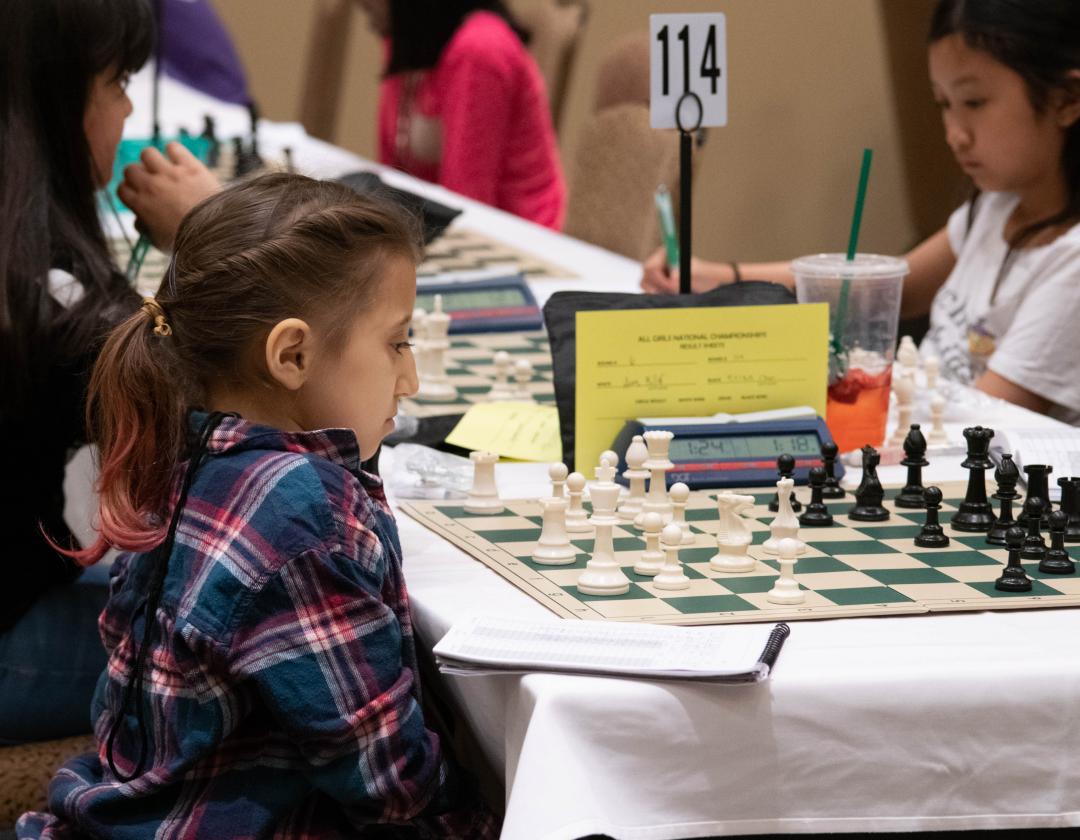 Anna Miller of MD, Photo Betsy Zacate
Even though friends are inspiring, the battles waged over the board in the Under 16 section proves friendships are paused once the clocks start. Iris Zhou, 2100 came in from Missouri in hopes of winning the champion title. Zhou and Sheena Zeng, last year’s Under 14 Champion, drew in round 3. Zeng, who is from Kansas, kept herself in the running for the title with a win in the fourth round. Meanwhile, Aria Hoesley, sporting a 2024 rating from Chicago, earned her fourth win in a row by defeating Zhou. Hoesley entered round five looking for a perfect score but Zeng held her back with a draw. Arya Kumar, 2071 from North Carolina eventually drew with Zeng in the final round ensuring both of them a finish in the top five. 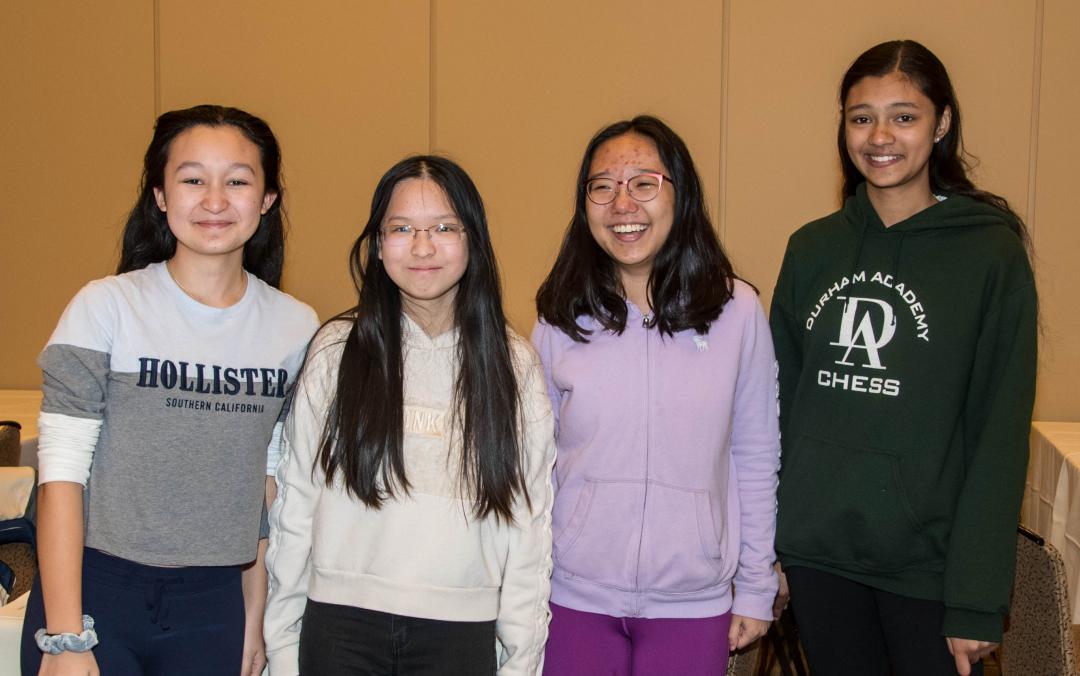 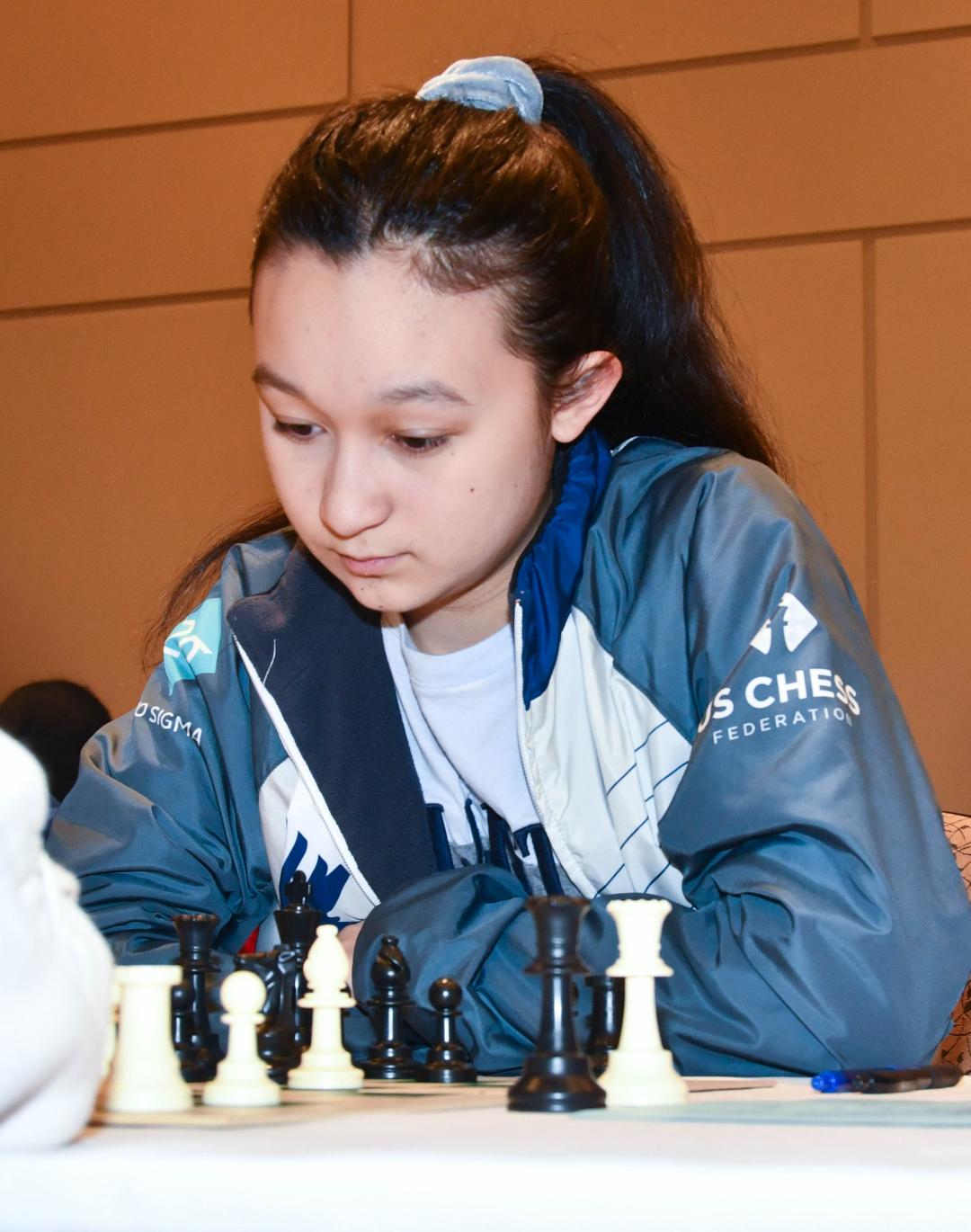 Aria Hoesley, Photo Betsy Dynako
After the final round the four girls were spotted having a fast paced conversation. They often got so excited they spoke simultaneously, yet they all followed the conversation. The games were over and their time together was coming to an end so every second of bonding time mattered. Little bits of their talk included helping Hoesley pick what game to have published. Other snippets included: “I didn’t play the King’s Indian because I know you play the King’s Indian.” “I wanted to copyright that move.” “No one plays Knight d5 (there). “I have been playing Knight d5 since I was 8 years old.” Aria sent her win over Arya Kumar to CLO, with light annotations. Familiar faces played in the Under 18 section. New Jersey native and Women’s FIDE Master Sanjana Vittal spent most of her time on board one. Her rating of 2163 put her 200 points ahead of Expert Alice Lee of Minnesota and 300 points over Natalie Wisnioski (1814). All of these young women have extensive chess experience including playing internationally. Lee also broke the record for the youngest US Chess Expert the very same week that Rachael Li (also 9), accomplished the same feat. While Vittal was favored to take the title, few players expected 9-year-old Alice Lee to play in the section. 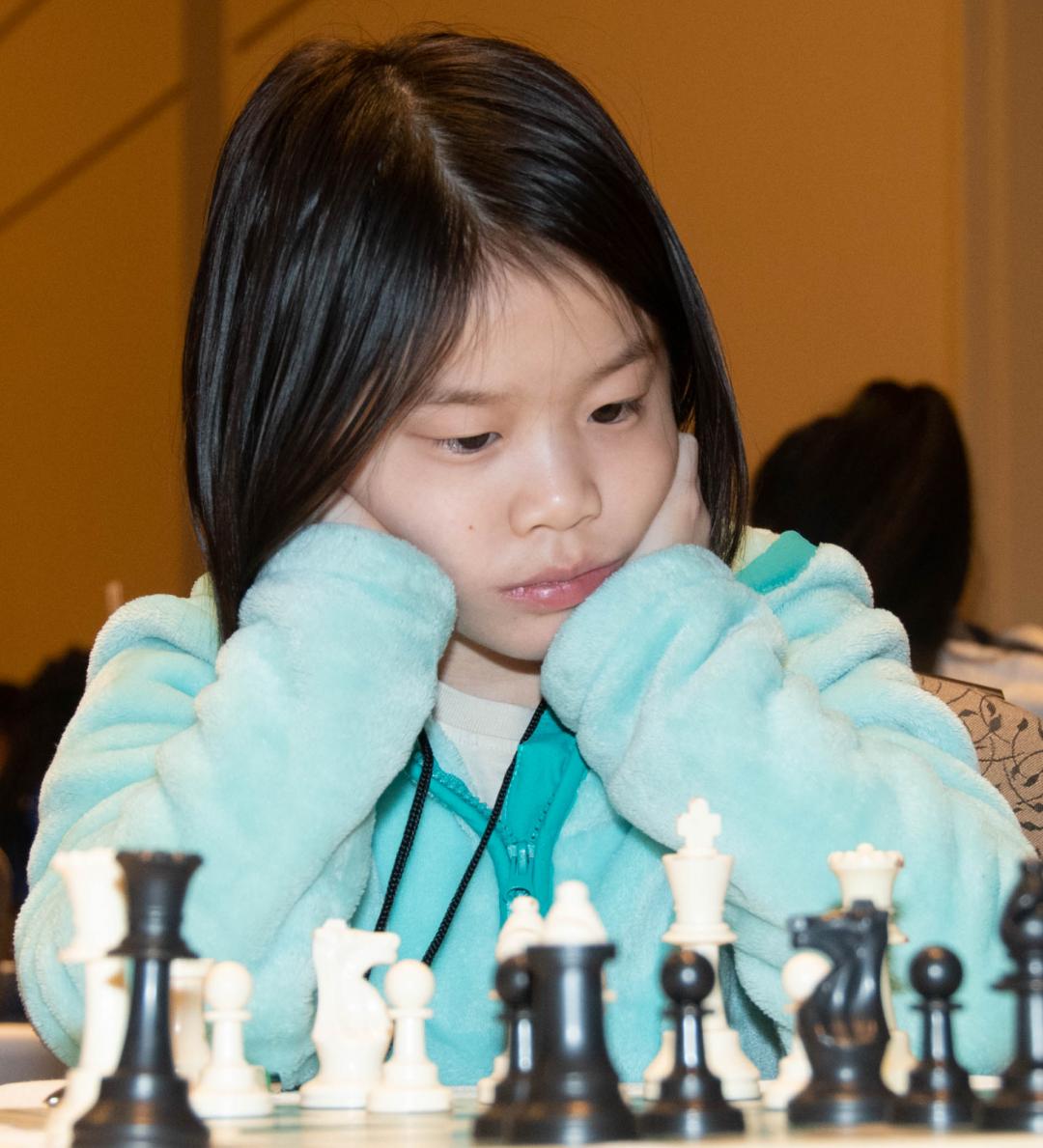 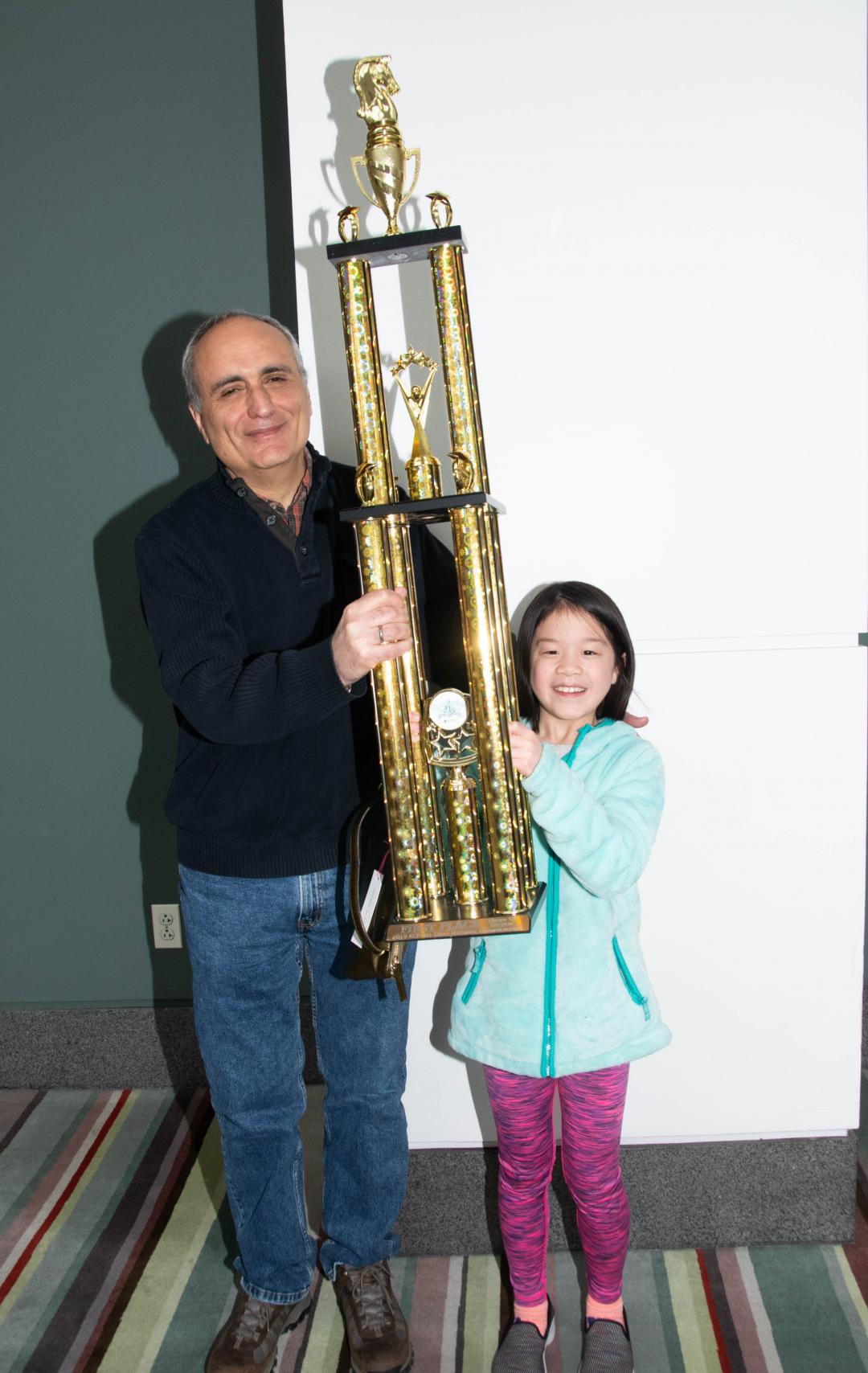 GM Dmitry Gurevich with Alice Lee
Alice Lee took first place in the Under 8 section in 2017. In 2018 she placed 9th playing up in the Under 14 section. Lee played up again this year after being encouraged to do so by the father of NM Nastassja Matus. Lee lost her round two game to Bella Buitrago of Illinois. Vittal had the only perfect score for the section until Natalie Wisniowski of Illinois, held her to a draw in round five. This draw left the top prize up for grabs as Vittal and Lee faced off in the final round. Lee left the site with the title of Champion, a trophy, a purse from Hipster 4 Sisters, and the right to represent the USA in the World Youth Championships later this year. Can you find Lee’s pretty forced mate in the following position, against Beatrice Low in round five?

Show Solution Kimberly Doo McVay spearheaded the US Chess Women's table in Chicago, and along the way got some amazing photographs of winning teams, coaches and Star Wars characters. 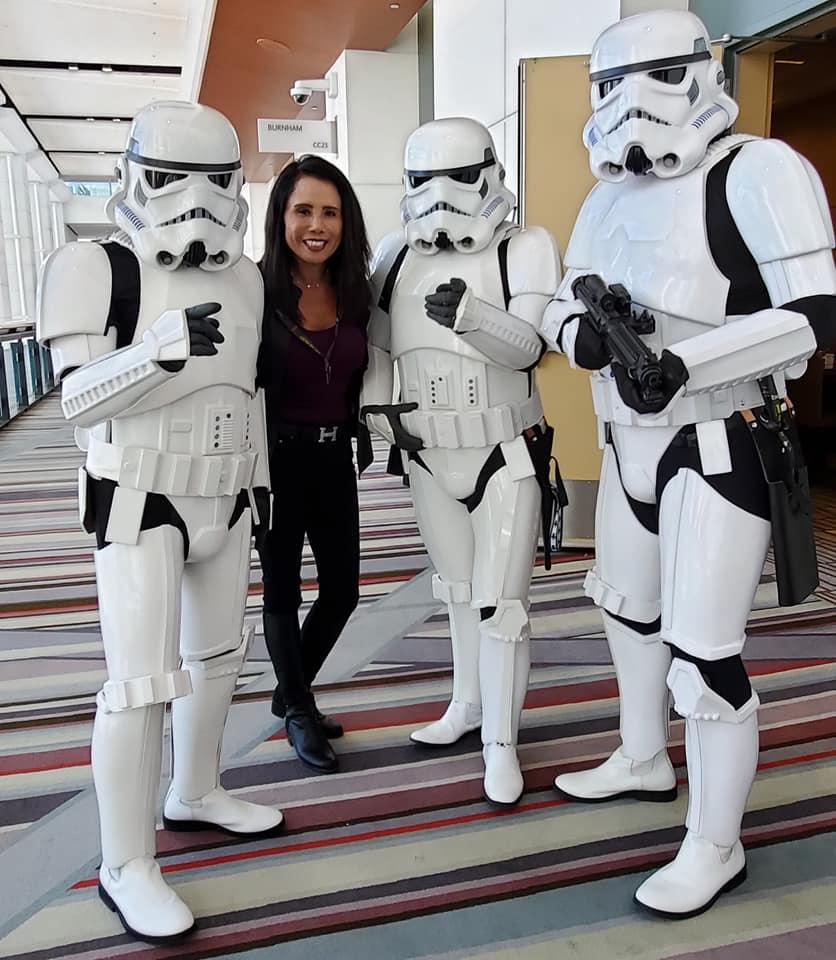 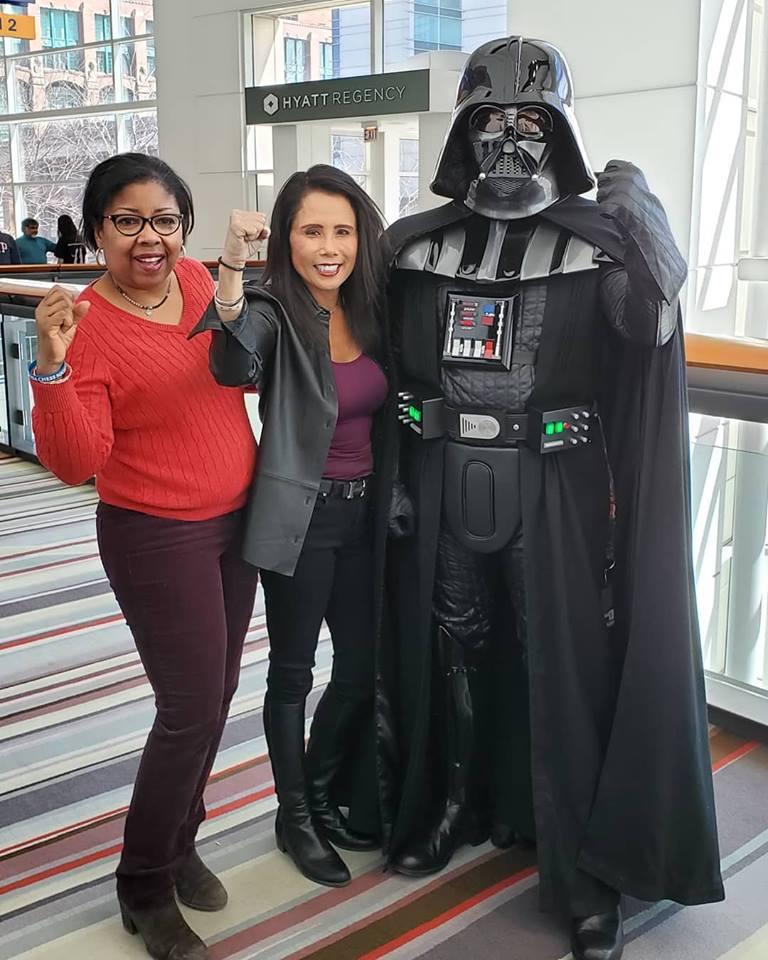 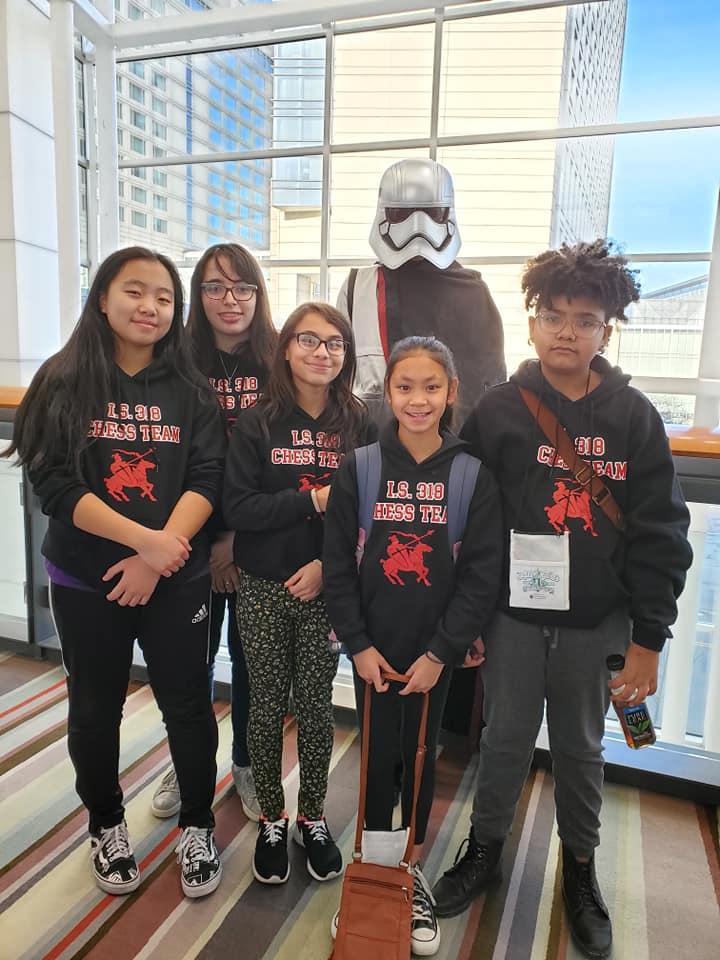 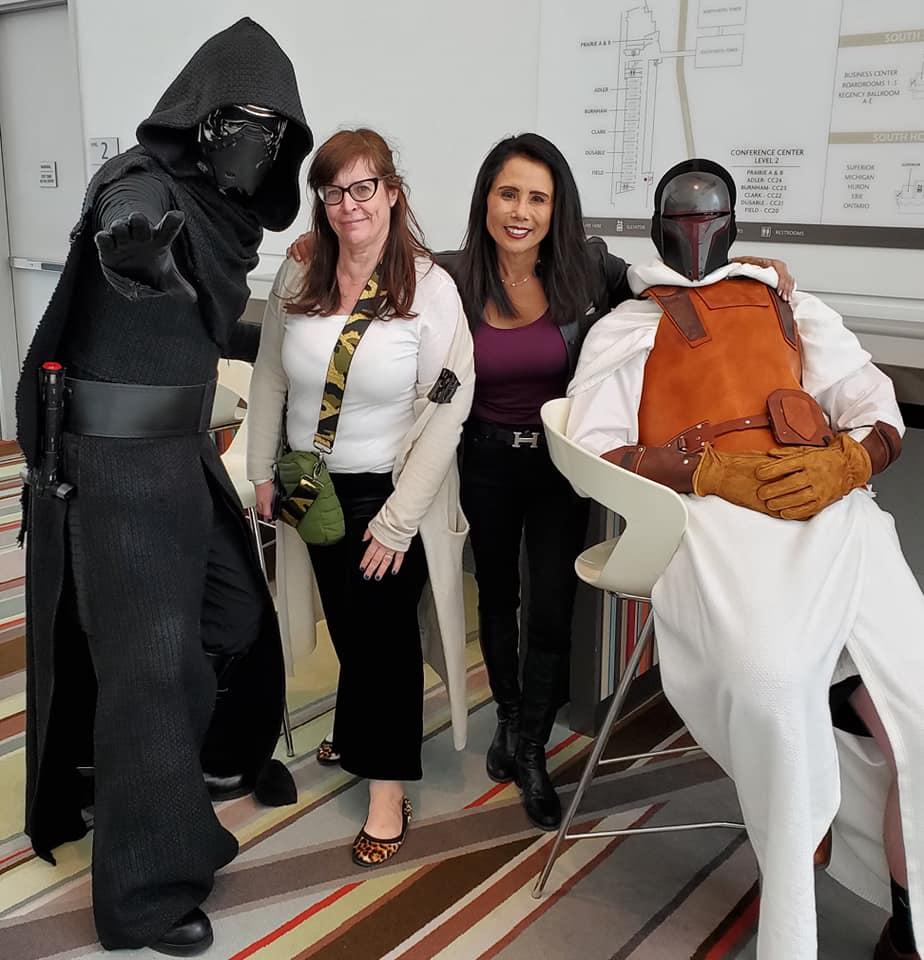 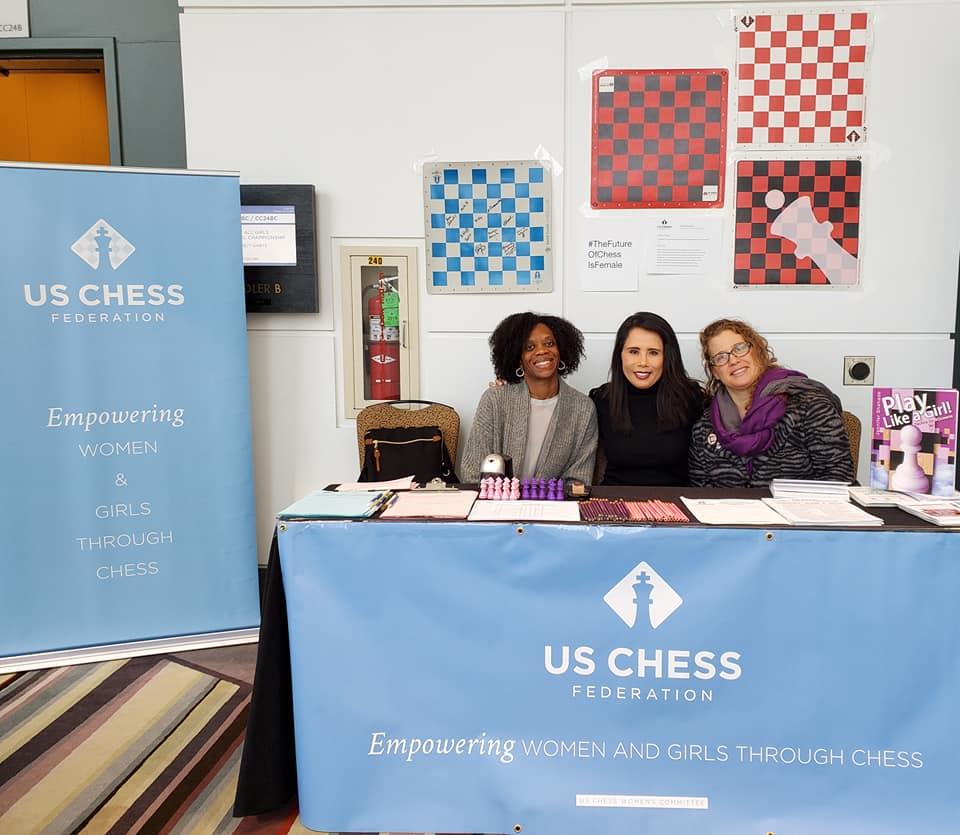 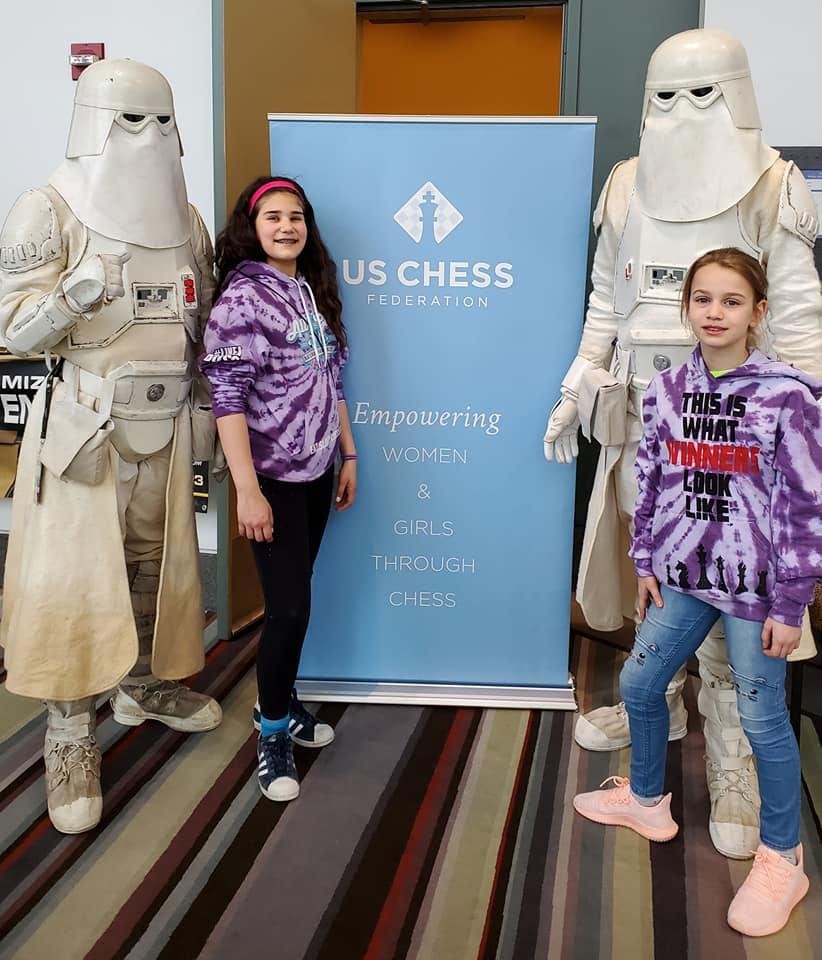 The snow that swept through Chicago on the closing day of the tournament did not cool of the competition in anyway, but it did make returning home more difficult for the players who came from 30 different states. New York brought the most players, 126. They will surely return in force next year when the All Girls is held about an hour outside of Chicago. The tournament will be hosted at the Westin Chicago North Shore of Wheeling which is known for being the home of the Chicago Open. In the meantime, the players will work hard on their games while they Facebook and Instagram to stay in touch. For friends are precious and chess friends are for life. All Girls - Prizes - 2019 Hipster 4 Sisters Bags (U-18 U-16 U-14) 1st place in each section: Alice Lee, Aria Hoesley and Sophie Tien  Brighten Wallets (U-18 U-16 U-14) Sanjana Vittal, Sheena Zeng and Aayushma Rai  2nd place in each section: Face Values the Foundation of Beauty by Deida Massey (50 Books) (U-18 U-16)Placed at the table 1st Round Pinwheels w Happy Faces (U-10 U-8) at the table 1st Round 5 Wooden Chess Sets (U-18 U-16 U-14 U-12 U-10) placed under Queen 2nd Round Star Wars Chess Set (U-8) placed under Queen 2nd Round
SHARE:

Congrats Alexa!
Great experience....
[…] All-Girls Nationals is presented by Renaissance Chess and KCF in association with US Chess. Find the CLO wrap-up by Betsy Zacate here. and our official video from last year’s event […]
[…] Seven experts are pre-registered in the K-5 Championship, including Jayden Lee (Arizona), World Under 10 Cadet silver-medallist Erick Zhao (Florida) and Iris Mou, who just won the Under 12 section at the All-Girls Nationals in Chicago. […]