Positional Understanding at the 41st US Chess School 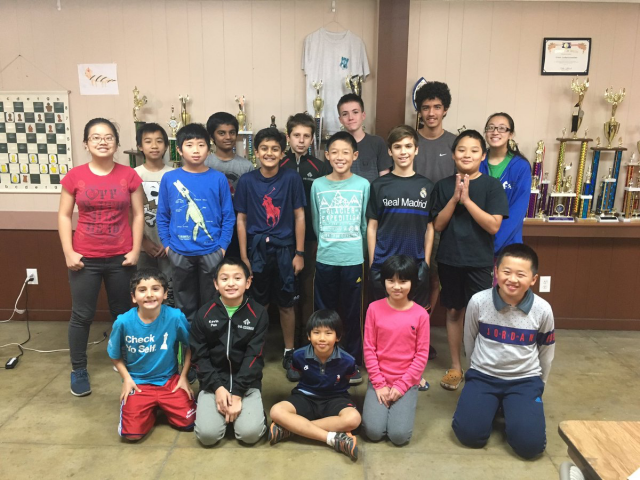 Standing (left to right): Julia Sevilla, Danny Soong, Derek Jin, Sandeep Sethuraman, Vyom Vidyarthi, Robert Shlyakhtenko, Alan Song, Alex Costello, Gabriel Eidelman, Joaquin Perkins, Leonard Vu, Cindy Zhang;
Sitting: Aren Emrikian, Kevin Pan, Marvin Gao, Rui Yang Yan, Eric Li
The 41st US Chess School was an invitational chess camp held in Glendale, California  (only about an hour’s drive from where I live) from November 17-20. Including myself, 17 chess players aged 7-14 and rated 1800-2300 attended, making this the largest US Chess School ever held. The camp’s instructor was FIDE Senior Trainer and International Master Armen Ambartsoumian,  who also taught at a previous US Chess School that I attended. The following is a day by day account of my experience at the camp:

Armen started by discussing the importance of analyzing your games by yourself, finding your weaknesses, and being creative in the opening - without mindlessly adhering to theory and engine lines. It is extremely important to have the ability to work by yourself without the help of engines; otherwise they will simply give you evaluations and variations without giving you an actual understanding of the position. He proceeded to talk about the criteria of positional evaluation in balanced positions. The basic five criteria are:

Of course, the criteria need to be adjusted in unbalanced positions with, for example, different amounts of material.

Next we proceeded to talk about the concept of the “annoying piece.” How would you continue in the following position?

One game on this topic that I particularly enjoyed was Maxime Vachier-Lagrave’s beautiful win against Ding Liren in the 2013 Alekhine Memorial:

Show Solution Every day after lunch break Armen gave us some training endgame positions to play and then to discuss together. On day 1 the topic was queen endgames. I somehow managed to lose the training position with both white and black to Alex Costello.

In the first half Armen talked about how to “diagnose yourself”, or in other words, to find what areas of the game you need to improve on. One strategy that he suggested is look at several of your games, divide them into three sections (opening, middlegame, and endgame), and then count how many mistakes you make in each stage of the game, and then focus on the part of the game where you are making the most mistakes. He then chose a game from one of the students to analyze...in fact the game that he chose was mine!

In the second half, IM Greg Shahade gave a lecture on prophylactic moves. The first game that he showed was played by Yusupov. I was absolutely stunned by the depth of black’s ideas:

On this day we discussed Defense. Unfortunately, I missed the first 24 minutes of the class - the entrance to the 101 South from the I-405 was closed, and we had to take a huge detour. On the plus side, I never knew that California had such beautiful mountain scenery. We also had an intuition test in the afternoon administered by FM Aviv Friedman. There were 30 puzzles in which you had to suggest just one move, but you only had one minute per puzzle. It was not very difficult as in previous camps, and I managed to do quite well with 18/30.

We continued discussing defense (in particular, counterattacking), and also held a 10 second with 1 second increment knockout tournament (I suggested a 1 second tournament but strangely enough the idea was not met with much enthusiasm). Congratulations to winners Julia Sevilla and Eric Li, who drew about 5 games in the finals before they were declared co-champions! (I was knocked out in Round 2 after blundering my queen on move 10). You can watch the tournament here: 1NFwPVrDEWk"> Here are a couple photos from the camp: 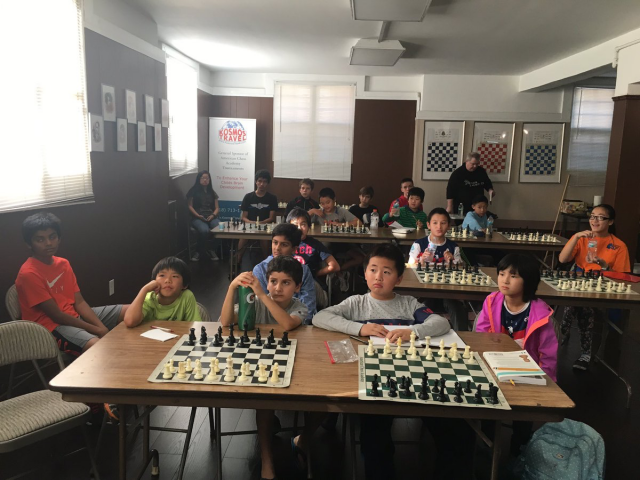 The start of the camp 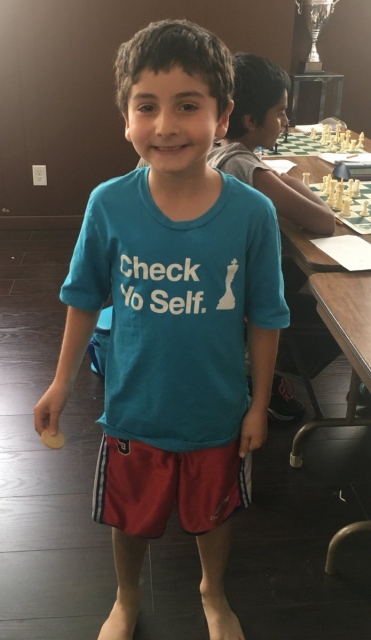 I played a world champion for the first time - pictured is U8 World Champion and part-time tactical monster Aren Emrikian! I even managed to beat him 3-2 (I hope nobody mentions my extreme luck in all the games).

Of course the highlight of the camp was beating Greg Shahade in 1 second chess (I hope this gets past editing):

Not only did I learn a lot, but the camp provided an excellent opportunity to warm up for the 53rd Annual American Open tournament in Costa Mesa, CA, held over the Thanksgiving weekend. Pretty much everyone who attended both the camp and the tournament did well there: Gabriel Eidelman tied for first in the U2200 Section, Joaquin Perkins finished in a tie second in the same section, and even I managed to upset an IM and a WGM in the Open section! This was an absolutely amazing opportunity for me. It was a great privilege to learn from IM Ambartsoumian and to work together with so many other youngsters of a similar rating. I cannot thank enough organizers Greg Shahade, Aviv Friedman, and Dr. Jim Roberts (who has been sponsoring the US Chess School for almost ten years!) for the incredible camp. Follow the US Chess School on their website and instagram.
SHARE:

Great article by Robert! A future chess journalist? IM Ambartsoumian is one of the great coaches of our era and Team USA is very fortunate to have him. I have seen FM Aviv Friedman teach as well and he really knows how to connect with players of all levels. Drills the points home, and makes it fun. Huge thanks to IM Greg Shahade for all his work in spreading the U.S. Chess School across America. I think it has made a huge difference in the quality of play (and the camaraderie) of our young players. Finally, I guess Dr. Jim Roberts is the one whose support makes this all possible. Thank you Dr. Roberts!