All or Nothing at the London Classic 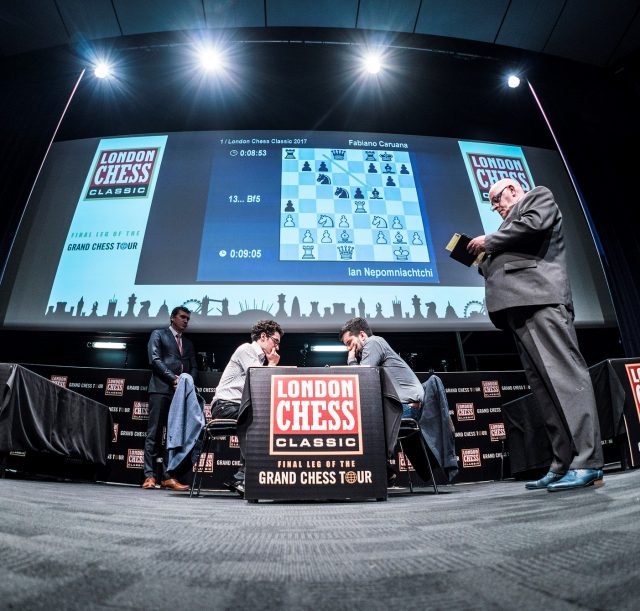 "I started out really well, but before today I really couldn't have expected that I would win it. Everything had to go my way." -Fabiano Caruana

Fabiano Caruana was the first victor of the tournament, winning two games in a row while every other player (except the ones he defeated) was still on 50%. Yet, entering the final day, Caruana was a long shot. For Caruana to win the London Classic, 2-3 things had to happen: >>>1) Caruana had to win on demand against GM Mickey Adams >>>2) His tournament rival, Ian Nepomniachtchi, had to draw or lose (with the white pieces) to >>>>>Maxime Vachier-Lagrave. >>>3) If Nepo and MVL drew, Caruana had to defeat Nepo in the rapid/blitz tiebreak. >>>

Round 9: A Must Win Game 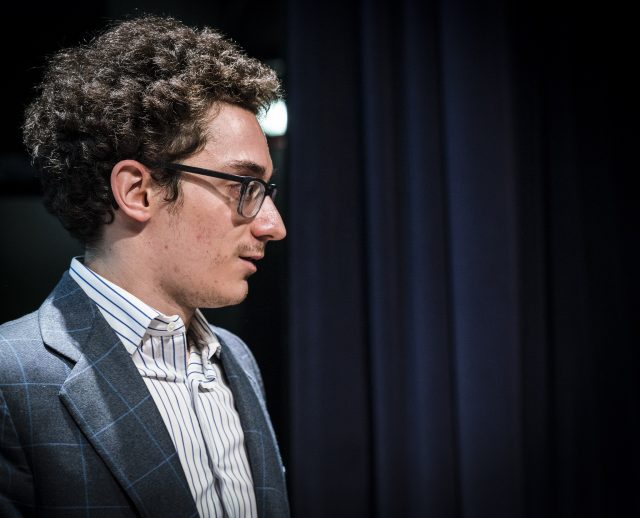 Photo: Lennart Ootes
Often, when super-grandmasters face must-win last round situations, it goes awry. Most 2750+ players train to become well-rounded, consistent players with very few weaknesses in their game. They compete in mostly closed events where a win usually isn't as ideal as a loss is detrimental and where a draw is almost always an acceptable backup plan---or, even the goal, if playing Black against a higher ranked player. Each rating point they lose could cost them invitations to prestigious tournaments. Super-GMs don't get many opportunities to play in a win-at-all costs fashion, and, consequently, it can be very hard to adjust when the situation arises. In fact, it was only Vachier-Lagrave's previous tournament that he faced a win-at-all costs game against Dmitry Jakovenko to attempt to qualify for the 2018 Candidates Tournament. MVL lost tragically while fighting for the win. Caruana himself also has not-too-distant memories of a particularly brutal must-win situation. One of the most important must-win games in recent history was Caruana vs.  Sergey Karjakin in the last round of the 2016 Candidates---where a chance to challenge Carlsen for the World Championship as well as around half a million euros in WC match prize money were at stake. Caruana used the sharp Rauzer Sicilian to create an unbalanced and dynamic position with winning chances as black and even gained an advantage in the proceeding middlegame. However, he ultimately blundered in the complex position and lost. 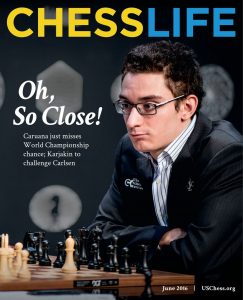 Despite this, Caruana showed great resilience at the London Classic---none of his previous setbacks or current obstacles seemed to faze his composure. Caruana attempted to create play in the middlegame, but it backfired, and Adams, who is highly experienced in these types of positions, ended up with the better game. By move 31, Caruana had resorted to repeating moves with his king and was willing to accept a draw, but when Adams decided to play for more, Caruana found a key resource to fight for the win. 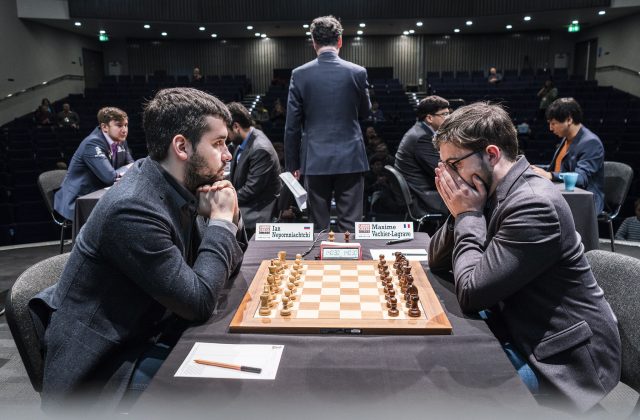 Photo: Lennart Ootes
Ian Nepomniachtchi and Maxime Vachier-Lagrave drew their game very quickly---in under 20 moves. This was a bit of a surprise because Nepomniachtchi had the white pieces and an extra half point over his closest rival, Caruana. Thus, there was a lot of incentive to fight for a victory, which would've sealed first place without a playoff. MVL also had motivation to play for a win as he was competing against Carlsen for 1st in the Grand Chess Tour. After the game, both players seemed discontent with the result.

"Of course, I'm not very happy with what I did today. I think no one really liked it. But, at some point, it could be a long game and end in a draw anyway, and then, if Fabi wins, at least I'll have some rest for the tiebreak. That's not perhaps the most brilliant strategy, but I didn't have any other." -Ian Nepomniachtchi

Despite Nepomniachtchi's uninspiring last round draw, closing out 2017 with a tie for 1st at the London Classic, including a victory over the World Champion, was highly impressive---especially since Nepo described his chess year before the tournament as "awful." Prior to the London Classic, Nepo had lost 40 FIDE rating points over the year. "It shows that I can still play decent chess," were the modest words he used to describe his 2900+ performance. 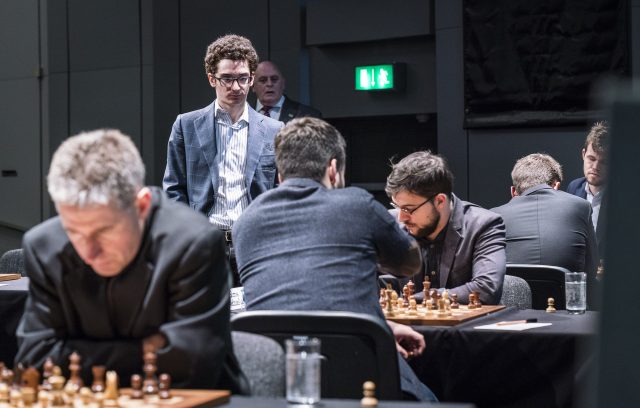 "I wasn't sure about Ian's intentions in the game because Fabiano can catch him. So, I wasn't sure if he would play with the intention of forcing a draw like what happened in the game. But, then that's the problem with my narrow repertoire. I mean, I could play something to create off balance, but it's not that easy because, let's say I play the King's Indian, after ...e5, there's dxe5, queen exchange, and it's an easy draw. I felt like I should play what I know, and, well, he if forces a draw, then it's bad luck. " -Maxime Vachier-Lagrave

It was particularly tough to watch MVL’s post-tournament interview. Both his expression and words were full of disappointment, not just about not being able to fight for a win and for the Grand Chess Tour victory, but on so narrowly missing out on qualifying for the Candidates just weeks before. Over the last 2 years, MVL has grown into a serious contender as Carlsen’s challenger, breaking 2800 for the first time, reaching 2819 to become the 6th highest rated player of all time, and winning the Sinquefield Cup. In addition, MVL did everything he could to try to qualify for the Candidates through raising his rating, competing in the World Cup, and competing in the Grand Prix. In the final round of the Palma Grand Prix, he went all out for the win because it was his last chance.

"The Frenchman achieved a sizable advantage and was quite possibly winning according to the Russian [Jakovenko] after the game, but nerves failed him and the game went wrong in a big way." -Albert Silver, "FIDE GP in Palma: Jakovenko and Aronian share first!"

I think MVL's overall results and efforts make him deserving of a spot in the Candidates, and it’s unfortunate that his successes didn’t occur at the right events to qualify. https://twitter.com/davidllada/status/934464413893095424 https://twitter.com/PelletierChess/status/934722599078256640

“This one [Grand Chess Tour] was all sorts of lucky, and Maxime deserved it just as much as I did.” -Magnus Carlsen

The Playoffs: Caruana vs. Nepomniachtchi 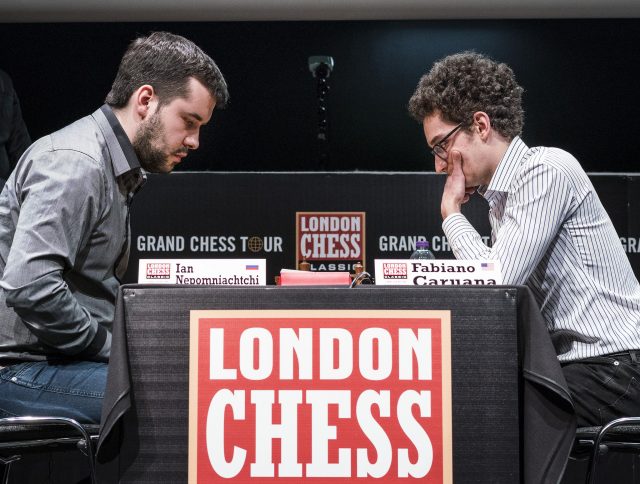 The first 10-minute rapid game (with a 5 second delay) displayed Caruana's stellar technique. Although he struggled to retain compensation for his middlegame exchange sacrifice, when the players reached the endgame, he steadily outplayed Nepomniachtchi---as if he had no material deficit at all. Watch the game segment below as Caruana clearly improves his pieces and deprives his opponent's pieces of good squares---all with less than 30 seconds left on his clock. In the end, Caruana had the the preferable position, but accepted a draw because he had only 7 seconds left.

Game 2 was the shortest game and also Nepomniachtchi's best chance to win. On move 20, Caruana miscalculated and used up a substantial amount of time in the process, leaving himself with a loose position and granting Nepo a bishop vs. knight in an open game. However, Caruana was able to stabilize his position, and the players soon agreed to a draw. At that point, Nepo still had some advantage in his position, but he couldn't find a way to make progress. 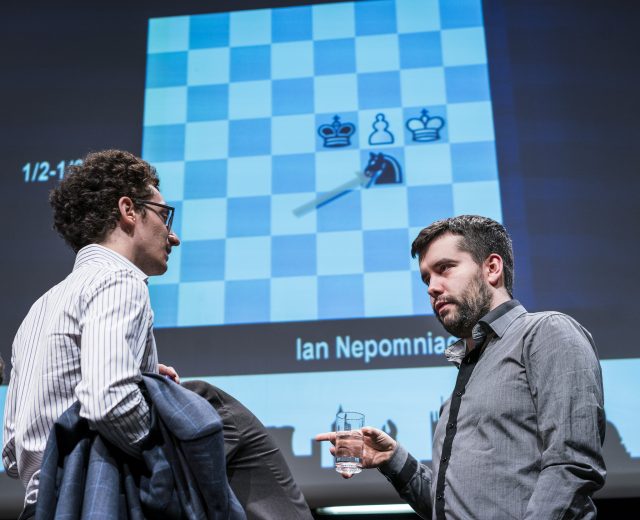 Despite Nepomniachtchi's knight blunder on the 13th move, Caruana was unable to convert the 3rd game into a victory. Photo: Lennart Ootes

"Fabi must be kicking himself. Winning a piece on move 14 and not being able to win?" -Commentator Maurice Ashley

The 5-minute (plus 3 second delay) blitz segment began very dramatically---Nepomniachtchi blundered a knight on move 13. With a full 3 minutes and 30 seconds left on his clock, one would expect this to be an easy win for Caruana, but Nepo kept fighting and carefully defending. In the time scramble endgame, Caruana missed the win by inches, and Nepo was able to trade off Caruana's final pawn. Can you find the winning idea that Caruana overlooked with 6 seconds on his clock?

"I think, in blitz, you're so in the zone. You have nothing you can do but think about the game. There's no way to wallow in your suffering. That would be maybe later tonight, Fabiano will kick himself. But, right now, he's zoned in. He's ready to battle." -Commentator Jennifer Shahade

Despite missing the opportunity to win game 3, Caruana seemed unaffected during the final blitz game, and won in clean style, weakening Nepo's kingside and then sacrificing a knight to draw Black's king into the center for a deadly attack.

"The players were so calm throughout that storm. They were just playing their moves, taking pawns, pawn after pawn. Take the pawn on h4. Then, go hunt the king. It was an amazing experience to watch these players." -Commentator Cristian Chirila 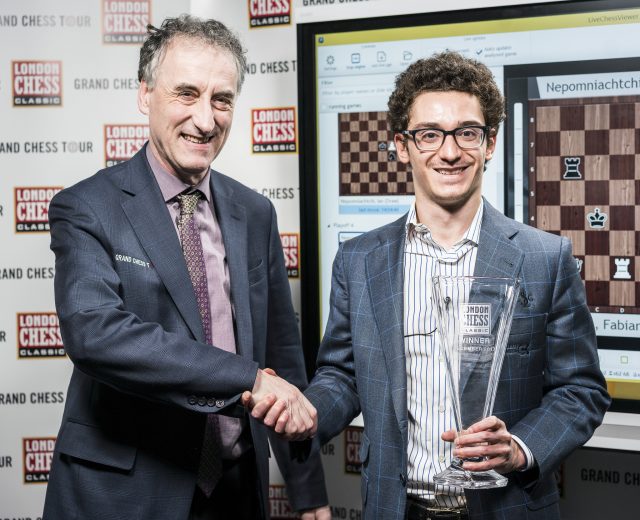 Photo: Lennart Ootes
This win ended the playoff and sealed Fabiano Caruana's first ever victory at the London Classic. In addition, he gained 12 rating points from the event, making him the clear #2 in the world, just 22 points away from Carlsen. Currently, in live ratings, Carlsen and Caruana are the only players in the world over 2800. 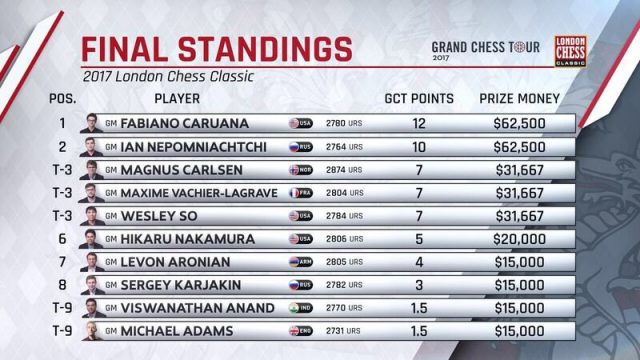 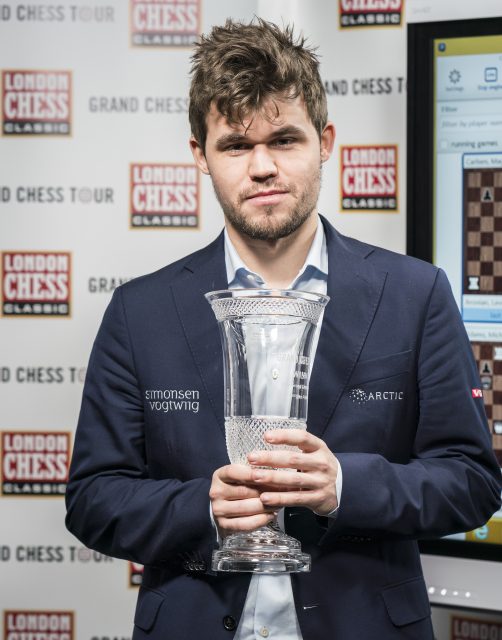 The 2017 Grand Chess Tour Champion, Magnus Carlsen. Photo: Lennart Ootes
Although Carlsen struggled to play his best throughout the tournament, he showed a high amount of fighting spirit in difficult positions. This paid off, especially when he managed to save a piece down ending against Hikaru Nakamura. In the final round, Carlsen needed only a draw to clinch the GCT Championship. After a mistake by Aronian, Carlsen even managed to win, finishing his tough event on a positive note.

"I didn't have any energy at this point or at any point during the tournament. You don't really get nervous because I know I cannot play anyway, so there's nothing to be nervous about. I was trying to hang on. I was very happy when I got to sacrifice these two pawns because at least I had stabilized the position, and I had something to play for. ...Then, he decided not to take the draw when he should've, and that was my good fortune in this game." -Magnus Carlsen 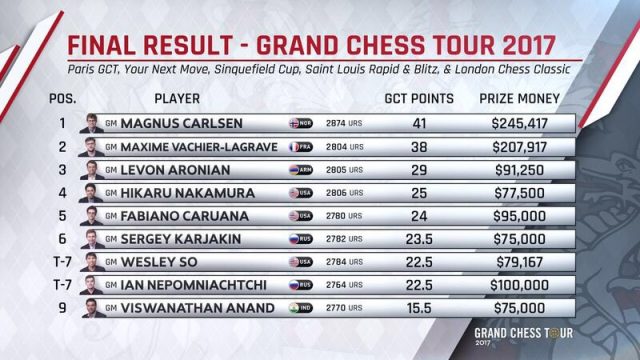 For more information on the London Classic, visit the Official Website.