In late April, nearly 400 girls from 33 states converged on Chicago, Illinois for the 17th Annual KCF All-Girls National Chess Championship, which returned to over-the-board play after a two-year hiatus due to COVID. The three-day event featured six rounds of classical chess across six age-based sections, punctuated by Bughouse and Blitz tournaments.

But the All-Girls Nationals isn’t a run-of-the-mill tournament-- it’s a special opportunity for the growing community of female players to meet, compete, and develop the lasting friendships and camaraderie that chess inspires. And while other tournaments struggled to rebound from COVID shutdowns, the All-Girls returned strong with an attendance very near its pre-pandemic numbers.

“Once the tournament started, it was like a homecoming being back with the players, family members, coaches, and staff that have made this such a great tournament year after year,” said David Heiser, president and founder of Renaissance Knights Chess Foundation, the event’s sponsoring affiliate.

While the All-Girls is a familiar tradition for many, the Los Angeles-based Archer School for Girls team was seeing it with fresh eyes. “Our team is new, with seven of the eight girls playing in their first event," explained Coach Jay Stallings. "At the start of this school year, only Liora [Ginzburg] knew all the rules of play.”

The nerves of Coach Stallings’s first-time players wore away as the pieces began moving. Margaret Morris, for whom this national event was her first-ever rated tournament, appreciated the challenging opportunity. “I was really concerned that I was going to lose every game and not even know why, but I never felt like my opponents were playing moves that I didn’t understand,” she said. Margaret picked up her very first tournament win in round 3, but wasn't discouraged by her losses. "Despite winning only one game, I’m very happy with my performance.” 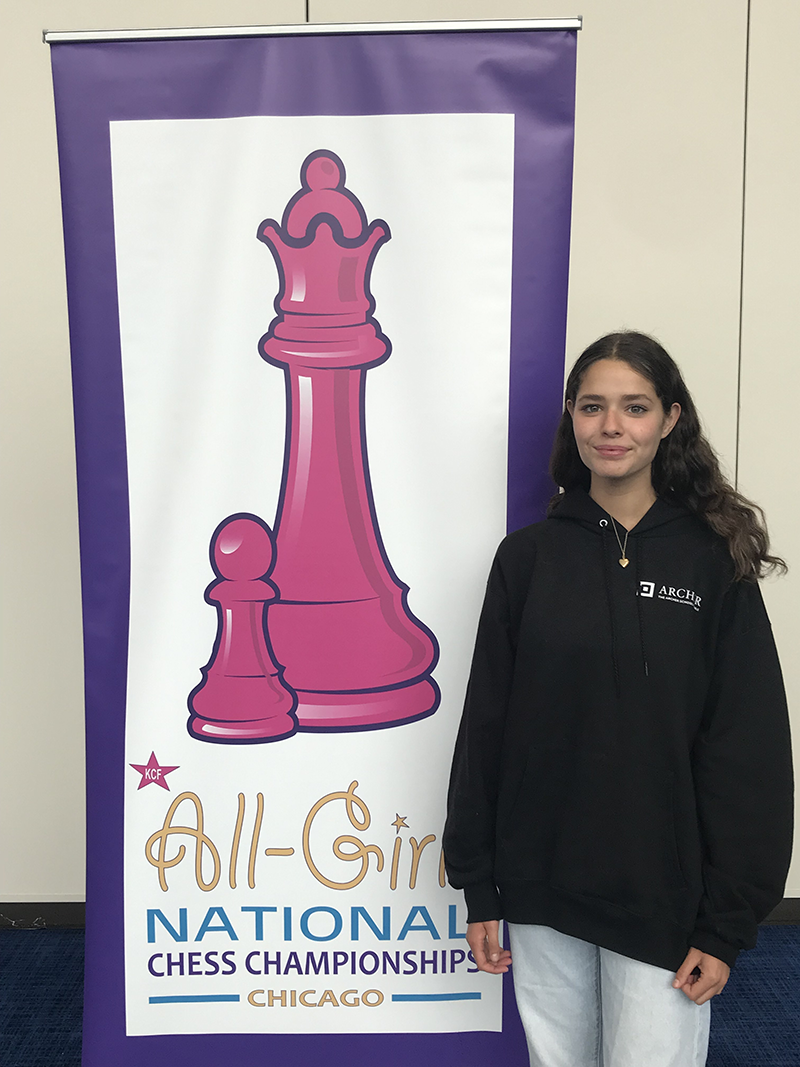 Liora, a 16-year-old who has attended past KCF Nationals as an individual player, enjoyed the new dynamic of competing with a team. “It felt great to feel like a part of something,” she said. “It really was a dream come true-- win or lose, when you walked into the team room, the team applauded you!” 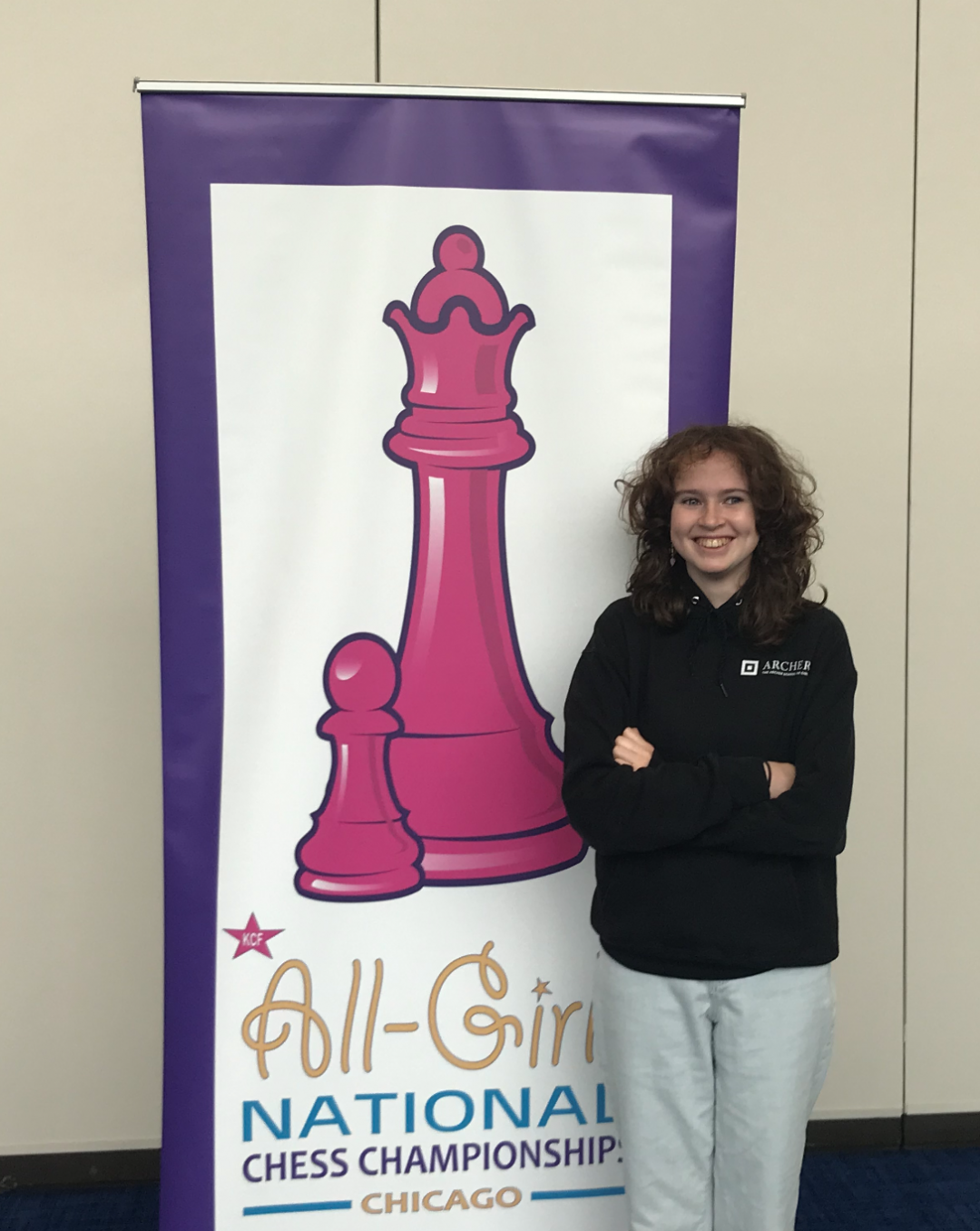 While the overall atmosphere was welcoming and supportive off the board, the competition on the 64 squares was fierce, with many players eager to showcase the improvements they had made during quarantine. The phenomenon of players’ pre-COVID ratings catching up with their actual abilities played out in real time at the All-Girls. According to Coach Stallings, many mismatched pairings weren’t quick wins, but drawn-out contests. “The other coaches and I observed that these matches seemed to take longer than many of the battles among top players,” he said.

“As soon as the pairings went up, my teammates started asking me if Iris was better than our coach,” Liora said.  “I told them she is, in fact. My team was so excited to see such a strong young female player.”

Below is Liora's game against Iris, with annotations provided by Coach Jay Stallings.

The loss against Mou didn't weigh heavily on Ginzburg though. “Despite allowing that tactic, I felt like I played well in this event,” she said. “My games were hard-fought no matter what my opponent was rated.” Liora finished in a four-way tie for 4th place in the Under 18, scoring 4/6 for the weekend.

With an overwhelmingly positive experience for the Archer School for Girls team, their excitement to return for the 18th All-Girls Nationals is already brewing. “While our team did not earn a spot on the awards stage, we applauded those who did,” Coach Stallings said. “And we pledged to be up there next year!”

The annual All-Girls Nationals was launched in 2004 by the Kasparov Chess Foundation (KCF). This year, the KCF celebrates its 20th anniversary as an organization.

Special thanks to Liora Ginzburg and Jay Stallings for their research and contributions to this article.

Below are the top finishers in each section. Full results can be viewed here. The Champion in each age category qualifies to represent the United States at the 2022 World Cadets (U8, U10, U12) and World Youth (U14, U16, U18) Championships.

New York-based teams dominated the team standings, finishing on top in five of the six sections

Is Noni Hardaway related to…